In what seems like a startlingly fast turnaround time from Ikoria, we're now ready for the Core 2021 drop. This time around Efren and Ted have invited Skybilz of Oxygen Esports and Magic with Zuby to share their thoughts on the cards they are most interested in. Remember, these are quick picks on any basis, and not necessarily predictions on which cards will do best in your favorite format!

If more Core Sets were like M21 I would look forward to them every year.  Although Core 21 has the same lack of flavor that past Core Sets have had, it's made up for it with some new and interesting commander cards, powerful reprints, and kickin' rad new premium treatment for classic cards.

Vito, Thorn of the Dusk Rose

The maybeboard for my beloved Teysa, Orzhov Scion EDH deck is almost as large as the deck itself at this point.  I love trying to stuff cards in there that don't exactly fit the aristocrats build but still let me drain my opponents in an annoying way, and Vito, Thorn of the Dusk Rose here fits that bill nicely thanks to be ability to wait until something isn't blocked before activating the drain at instant speed.  If I make a new EDH deck from any of the M21 legendaries, it will be DonVito.dek.

I wish I was cool enough to say that the reason I'm excited for a scooze reprint is that it is a mainboard answer to Uro, Cycling, and almost every annoying standard deck that's out there currently, but the real reason I'm happy it's back is pure, unbridled nostalgia.  I was introduced to Magic by my nephews one fateful winter's day, but I never really understood how to play the game until the Duel of the Planeswalkers app for iOS.  Once you completed the games challenges, you were directed to go your LGS and show them the completion screen for a free Scavenging Ooze promo.  It was my first real venture into MTG and I'll love this card forever for that memory.

I've gone on record many times saying that I love Project Booster Fun for the simple fact that I am a simple man that likes shiny, flashy things.  Receving a new and flashy version of an EDH staple to collect is one of the most fun parts of magic for me, and although Joseph Meeham's rendition of  Solemn Simulacrum doesn't look as sad as previous models, the beauty of the art and the reserved hopefullness that I've projected onto the creature's featureless face helps me remember that life ain't so heck.

I like Core Sets more than most longtime Magic players, I think because I started playing Magic when there was far less emphasis on flavor and story. Playing Revised on the floor of an LGS, I didn't know where Hurloon was, or why their minotaurs had facial markings, and that left room for my own imagination. Another reason I like Core Sets is the weird one off cards that they always seem to include, that tickle my brewer's jank instincts.

I've always been a fan of Sundial of the Infinite and the combos that it enables, so finding a new backup plan for the artifact smells like good news to me. Counterinuitive cards are one of my favorite things about the game. It's just a really great moment, first seeing a card and asking "Why would I want to do that?" and then setting off to figure out the answer. This is one of those experiences fairly unique to Magic, and Discontinuity delivers it.

As soon as I saw that Shrines were back, I knew I'd be building a five color EDH deck that runs them all, dropping Sanctum of All for the extra value. I have a few of the older ones, and enough balance to complete the whole set. This will be one of those decks that I'm fine winning with rarely, for the pure joy I will get that one time things work out. Right now, I'm thinking of asking the playgroup if I can run Genju of the Realm as my commander, and going deep on enchantments.

Steal and Sac is one of my favorite archetypes in Limited, and Village Rites is a great payoff piece for these decks. Sure, you can just Doom Blade your opponent's creatures, but who'd want to do that when you can steal them, swing in for damage, and then turn their resource into more cards? Plus, I really like to see first person horror art like this. I wonder if I could put something together with Village Cannibals and the other cards with this same point of view.

Historically, Core Sets tend to set the tempo and mood for how the meta is shaped over the next year -- especially in terms of sideboarding. Examples of impactful cards from Core 2020 include Shifting Ceratops and Aether Gust. However, Core 2021 could potentially have a bigger impact outside of the Standard sideboard this year, depending on how the meta shifts. I expect to see these cards in multiple formats:

Core 2021 provides a tutor card usable in aggro, midrange, or control decks in any format. For the low cost of 3 mana (2B, 1 colorless) and 3 life, any card in the deck can belong to to the player. With this reprint, I would expect to see this card in EDH frequently, however, I could also see this card in standard searching for Winota, Joiner of Forces in a Mardu aggro or midrange deck, or a Dream Trawler in an Esper Control deck as a finisher. Grim Tutor is essentially the ability to play additional copies of a desired card in any deck.

Ugin was a menace in Fate Reforged, and will continue to be one in this current meta. Although 8 colorless mana seems expensive, the current Standard is equipped to summon such an expensive planeswalker. Since ramp is so popular thanks to Growth Spiral, Uro, Titan of Nature's Wrath, and Nissa, Who Shakes the World,  it would not surprise me to see this in Simic or Bant Ramp. Also, I would expect to see Ugin more in EDH, because it will be more widely available thanks to this reprint, as it is a strong addition to nearly any deck in a 100 card format.

While not a reprint, the ways in which Angelic Ascension can be used are broken. The card does not specify that the exiled creature or planeswalker must be your opponent's card. Once Teferi, Time Raveler rotates, this could could be a very aggressive start as the player could exile their own creature at the end of their opponent's second turn to already have a 4/4 angel. While it is a token that can be easily bounced, without Teferi 3 in Standard, this could be a possible opener for enchantment decks or any low to the ground aggressive deck that uses white mana. If it turns out to not be a hit in Standard, this is a great tool for white in many, many EDH decks and could be another great answer for exiling creatures behind Swords to Plowshares and Path to Exile.

Core Sets have usually been considered to be rather boring and mundane sets and never very flavorful or unique. With the release of M21, I don’t think I’ve been this excited for a Core Set since the comeback of Slivers of M14. Here are some of my favorite picks.

When it comes to EDH, Torbran is one of my favorite commanders that I’ve recently picked up. I’ve built him as a punishment deck where I don’t really need to have creatures out to win, so Fiery Emancipation slots in easily. When I saw this card spoiled, my jaw dropped and I instantly fell in love. Dealing Triple damage on top with Torbran dealing an additional 2? Yes please all the way!

As far as Standard goes, this card is much needed, heck we could’ve used this in M20 but I’m glad to see it now. Eliminate will also help in Historic on Arena as I’m sure T3feri will live and thrive in that format.

I love cats, heck I have three of them. The art on this card is simply wonderful, amazing, and so darn cute. Plus it has the decent ability of preventing all damage done to you nine times. While I haven’t thought of ways of exploiting Nine Lives yet, I really hope the internet can because it would be great to keep the counters off of it or give it to a player when nine counters are about to be put on it. 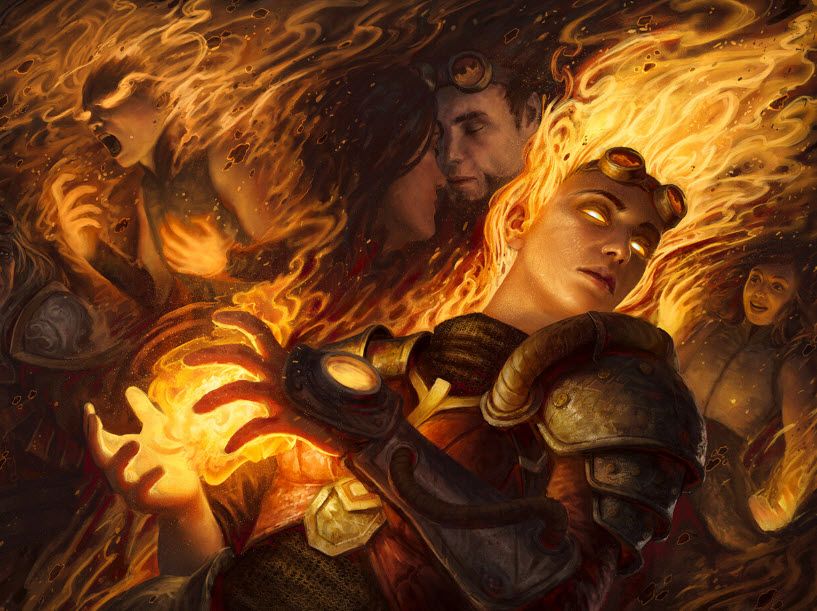 Cliff Daigle has a lot of product to talk about this month, but he breaks down the opportunities each provides in light of our unique current circumstances. 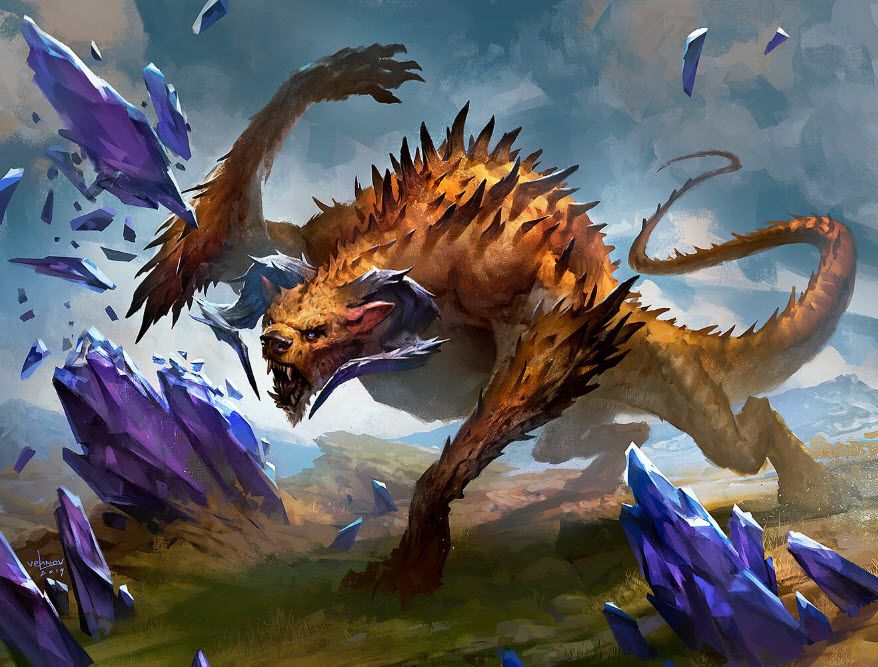 Darin Keener reflects on which older decks may have new life post-banning, or could get new toys with Core 2021.