Laura Makes Magic caught our eye because we absolutely love her art nouveau treatment of Magic's Pantheon of characters. Her unique style and socially minded work has continued to impress.

Here are the questions our community members came up with to ask her.

What made you focus on characters from MTG?

I’ve been playing for many many years, but I didn’t do any fanart until I was actually commissioned to do my first Magic: the Gathering Nouveau style piece, by a great friend who had seen my RWBY Pyrrha piece in that style, and loved it.

He commissioned Avacyn, and later Vraska. These got such an amazing response that I was inspired to do more of the characters that were personally meaningful to me, such as Phage and Jeska. In the past I’ve felt conflicted about working with fanart, because I thought it could be detrimental to the work of the original creators, but actually I’ve come to see that done right, it can hugely strengthen the communities and fandom around the characters and creators.

With Magic that really seems to be the case, and with so many absolutely incredible designs to choose from, and wonderful backstories (I’m a Vorthos to the core!) it’s a really rich repository of artistic inspiration and joy! And it seems to bring joy to others too!

Who is your favorite character to illustrate?

From the Magic pantheon, I definitely love working on non-white characters, because in general, darker skin is under-represented in fantasy art, and it means that there are more opportunities to be innovative and exploratory in the palettes we work with, making for more beautiful and creative imagery. It also means there’s more of an opportunity to contribute constructively to the world of representation – I do try to be as inclusive as possible in who I choose to represent (though I also work to commission, so some of the commission work is less diverse) and like to depict LGBTQIA characters as a preference. So far the piece I have enjoyed drawing the most was Huatli and Saheeli!

Which character is the most difficult to illustrate?

It’s a cliché, but I do find men a lot harder to draw than women! So Kynaios and Tiro of Meletis were particularly difficult for me! I also find anthropomorphised animal people quite challenging, so I’m intending to do Ajani at some point as a personal challenge, but I definitely find blending the elements of animal and human so that they feel balanced and cohesive much more demanding than drawing animals or people!

What other artists influence your work?

The Art Nouveau style I reference a lot, that many people recognise from Tarot card design, is in fact from the work of 19th century Czech graphic artist, Alfons Mucha. His work is incredibly contemporary when you look at in now, and his influence has lasted long past his time. Even if you don’t recognise the name, I’m sure you’ll recognise his beautiful work! As a kid, Kosuke Fujishima was a big influence on me, but I see now that he too was heavily influenced by Mucha. I’m autistic, and apparently that has some bearing on 3D perception, which may be why I’ve always loved clean and clear graphic lines (I loved Lichtenstein as a kid too!) rather than textural painterly work.

In later years I've learned a lot about composition and colour from following the work of MTG artist Scott M Fischer.

Who else influences your work?

Other than other artists? I do often put on playlists when I work, and sometimes I’ll find that one piece is so perfect for the composition I’m working on that I end up looping that track for the entire piece! Regular musicians that I play while I work are The Qemists, In Flames, Motionless in White, Skillet, Fozzy, Distorted Memory, FalKKonnE, Muse, Perturbator, Gunship.

Can you describe your typical process for us?

I initially draw my pieces by hand before scanning them, so if I’m using references, or if I’m sketching a rough design first, I will build a composition digitally, using reference elements, templates I’ve made in the past, or just rough digital sketches, then I’ll print that out and ink on a fresh page using a lightbox. I then scan this in, and use a tablet and stylus to colour the piece digitally in Adobe Photoshop, largely using gradient fills!

What would your dream project be if you had unlimited resources?

I’m a strong advocate for representation; I would love to have the time and resources to create a series celebrating the Magic characters who best represent diversity rendered in my Nouveau interpretation, and making a clothing line based around them, so that as many people as possible could feel ‘seen’ in this fantasy fandom! I love the inclusivity in a lot of Magic’s design, but a lot of those wonderful characters end up getting sidelined, or their stories fade out, and I would like to bring them more to the fore!

I would of course also love to get my art to standard where WotC might consider using my art for alternate art or something! That would be the dream!

What's the most fun way to enjoy Magic: the Gathering?

Well for me, it’s got to be a Limited format – ideally Draft, but Sealed is amazing too, I’m just not as good at it! And in person, able to touch the cards! I love cracking packs, the anticipation is half the fun! I love big tournaments, and miss the days of open-to-all PTQs- and now of course, I miss all events, especially European GPs! I think that was always my favourite, travelling overseas to nevertheless run into many familiar faces from the GP grinding scene, while getting to see beautiful new places and have a mini holiday! But on the living room floor with a bunch of friends is also a real treat. As long as at some point I’m cracking a pack, we’re good!

Realistically though, as I say, I’m hardcore Vorthos, which means I get as much of a kick out of reading the lore, appreciating the art, and seeing the awesome cosplays that people are creating, or just flicking through my binder of attractive basic lands, living the high life…so there’s a lot about Magic that’s fun still in lockdown! (I don’t play online because it scares me but I’m sure that’s also fun!)

Who is someone you look up to in the Magic community?

I have long term been an admirer and later friend of Caleb Durward, because he is an incredibly kind and genuine person and that comes across in all his undertakings. I have all the time in the world for anyone who uses a public platform to try changing things for the better, and he has always been resolute in expressing and qualifying his feelings on sensitive topics as an advocate for justice, without being anxious about how this impacts his popularity. He always demonstrates integrity, and I think it can be easy to lose sight of that when your popularity becomes your profession.

I’ve also joined Twitter in the last year which has made new parts of the community accessible to me, and I’ve come to have a deep appreciation for Gavin Verhey, because he just seems to put an incredible amount of work into everything he does. Reading his posts has given me a much more concrete appreciation for the Wizards Design Team and all the complex, thoughtful work that goes into developing sets – somehow seeing the man behind the curtain makes it MORE magical, not less! And in Gavin’s case, he still makes a lot of time for engaging media content and also personally connecting with his audience in a kind and personal way, and I really find that impressive and inspiring.

What are your hopes for the coming year?

This art trajectory of working with Magic characters is a relatively new one for me, and building on the success of last year, I’m hoping to launch a Patreon very soon, which I’m hoping will generate enough interest to allow me to afford to focus more on developing my art, and maybe studying a little, to establish more of my own work without having to rely on commissions, so that I can start developing custom product lines for things like playmats and tokens. I would also like to become a more involved part of the online Magic community, as it’s already been absolutely fantastic for me, and has been great for making friends and improving my mental health. I’m keen to get stuck in with the active community side of things as well as the creative side, and to strengthen the connections I’ve already made. And of course to locate the mystical amulet that ends the pandemic! 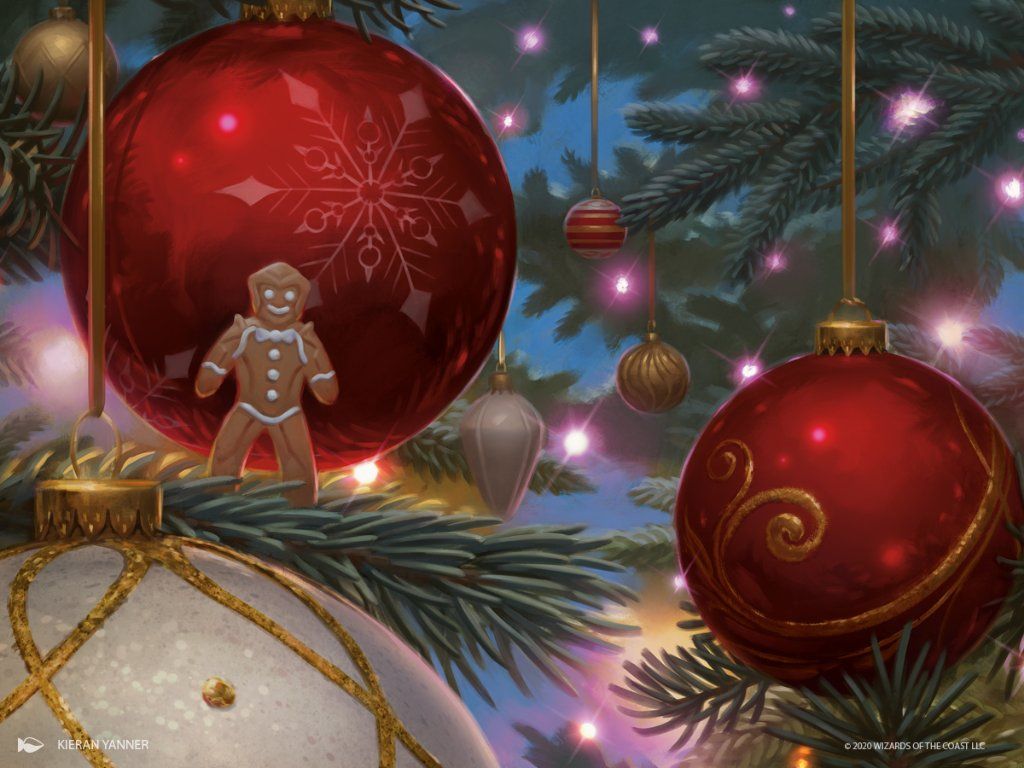 Josh Moore gets to put away the Secret Santa hat for another year. 2020 was a doozy for sure, but Cardsphere users spread the Yuletide joy in record numbers! 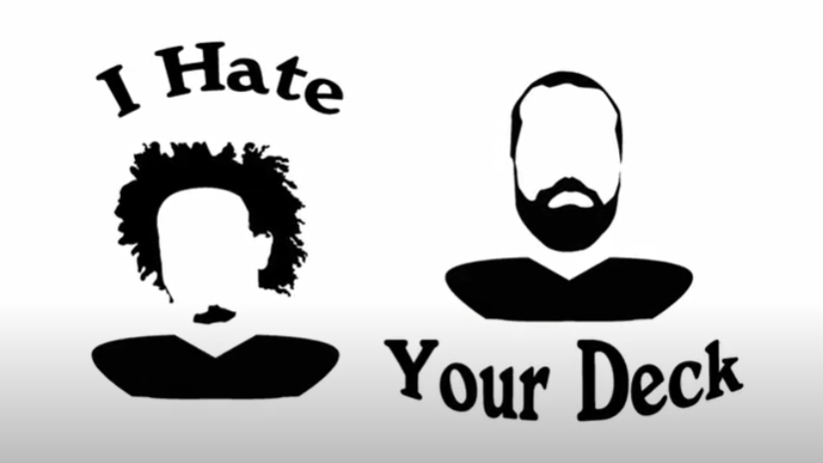 Welcoming the amazing new Commander show I Hate Your Deck to the Cardsphere team of creators. The most fun you can have without being there yourself!