It's the most wonderful time of the year again! We're just hitting the end of Throne of Eldraine spoiler season and enjoying the first looks at the new set during the MTG Arena preview event. As we love to do, Cardsphere staff has picked some of their favorite cards from the upcoming set, and are continuing with our tradition of also inviting community members, friends, and sponsored creators to share a few thoughts as well. As always, we're not laying out any guidelines as to the selection criteria, so a pick may be because of power level, jankiness, art, or flavor.

When my first ever rotation hit playing MTG, it was so frustrating for me that it was the last time I played standard until MTG Arena rolled around. Now that I'm going through the first ever Arena rotation and feeling a bit of the same, my enthusiasm for ELD as a standard set is just not there. But for an unapologetic casual who loves kitchen table EDH, this set is hitting a lot marks.

This was the first ever year I didn't buy a set of the annual commander decks to sleeve up and play with friends. They just didn't do it for me. Now I see where all the creativity went, the Brawl commanders all outstrip the C19 generals, and Alela is the one I'm most excited to turn into a full blown EDH deck.

It almost feels like cheating picking this card but in this case I am not above it. I hope WOTC finds a way to get more copies of this into the wild because I need at least a six or seven copies for my various commander decks, plus one in foil for my Teysa, Orzhov Scion deck. Second only to Sol Ring, this should be an auto-include in any commander deck.

Every time we do these I find myself picking a card only because I love the art. Blacklance Paragon might be good enough to play in the new standard, but the art by Victor Adame Minguez, which looks as though it could be an animation cell from Disney's Sleeping Beauty, is what won me over.

I'm super excited about Throne of Eldraine because I love folklore and fairy tales, and my favorite sets are usually those designed top-down. Here are the cards I'm most looking forward to getting my hands on:

Okay, I was always going to love this card. The art is basically me before I went grey. But I've also been running the Cavalcade of Calamity deck in Standard, and Torbran is going to turn all those little pings into Lightning Bolts. I'm sold.

Bake into a Pie

Instant speed conditionless removal with an upside, even with a higher casting cost, is a quality card in any set. That this also comes on such a spot-on topdown card (with maybe my all-time favorite flavor text) makes it even better.

Return of the Wildspeaker

Fantastic Non-Humans payoff card that really makes me want to build around. There are still some very solid tramplers post-rotation, and this card makes you either more stompy or gets you more stompers.

The most recent addition to Cardsphere's stable of talented creators, you can find Lizbeth streaming on Twitch or live from Next Ridge Games, her kickass LGS (and co-sponsor.)

I cannot wait to draft Throne of Eldraine. The first card that has me dying to draft is Syr Konrad, the Grim. A 5/4 for three and two black that will keep my opponent’s hands to themselves? Heck yes! If a creature leaves my graveyard my opponent pays a life. And if my opponent kills my creature on the battlefield, they lose a life. I’ve been dreaming of a way to discourage my opponent from tampering with my 2000 IQ plays, and making them pay a toll to play dirty seems a good first step. I mean, If I’m planning to cast Forever Young next turn, I would at least like to make my opponent think twice before snatching my bombs from my graveyard. Obviously killing my creatures is just rude and should be punished. Syr Konrad is indeed rad.

I’m definitely locked on Loch Dragon. He looks like he will see some serious play in limited. From me. I will play him. A lot. At four blue/red mana plus card draw, he’s literally begging to brew multi-color decks. Izzet is an obvious, but drafting him into Dimir or Temur seems super fun! He’s like the Cloudkin’s bigger bro who’s down to jank. I love cards that have easy mana fixing, and Loch Dragon lets me be the greedy player I want to be.

Stonecoil Serpent is a dream. I have an absurd love of artifacts, and this one has trample AND reach. And it’s colorless. Like, how do we get such gifts?! I’m not sure it gets any better than Stonecoil Serpent, y’all. To be totally honest though, it could probably cost 1 million mana and I would still love him. Luckily, he’s super adaptable and comes in at X mana, where his power and toughness is X. I don’t think I possess the willpower to pass this sweet baby up. The bonus of protection from multi-colored cards is just… I love him.

Doug has been a longtime moderator of the Cardsphere Discord server, and has recently taken up streaming his mythic play on Arena on the Cardsphere Twitch channel.

I’m excited to see how this card plays with one of my favorite underrated cards from WAR, Arboreal Grazer. Turn 1 Grazer/Golden Goose into turn 2 Oko allows you to ramp out and convert your ramp tools into 3/3 beaters. He also allows you to turn your Nissa lands into 6/6 attackers, although be careful that the land was not played same turn as you will lose the haste portion of Nissa’s ability. (You can do a similar trick with Harmonious Archon but keep the haste and vigilance)

This brute is just the epitome of value. With Lightning Strike's rotation we get a replacement that deals one less damage, but provides additional value with a 4/3 for 3 body attached. I think this will slot well into mono red and R/G bruisers. I can already see plenty of games where you curve this guy into Questing Beast and swing for 8. He also trades well with opposing Questing Beasts.

Drown in the Loch

I don’t play many eternal formats anymore, but I enjoy watching them and this is the kind of card that creates amazing mind games. Anytime your opponent has UB up you will have to decide if it’s worth cracking a fetch to cast an on-curve spell thmight counter. Or is it worth fetching to pump your Goyf but also turning this spell on. If you are bringing a card out with Delve, do you remove a potential Snapcaster Mage target to make sure you don’t get blown out by this card? I love how many different choices this adds to eternal formats.

Hey folks! Chaz here; you may know me from my various works such as a retired host from the MTGGoldfish Podcast, my content at Quiet Speculation as a host and Community Manager, my MTG Finance-focused twitter, and various other guest appearances! Speaking of guest appearances, this would be one of them. I appreciate Cardsphere for the opportunity to talk about my favorite cards from Throne of Eldraine. As a fanatic of the color Green; this may be the best set of all time!

When the community first became privy to this card we didn't exactly know what "Food token" actually was. Naturally I was curious and withheld my evaluation of the card. Apparently it didn't really matter all too much what Food tokens were because they are just the crown jewel of this card. I don't think I've seen such a deceptively versatile three mana Planeswalker as Oko. I believe it's so good that many decks won't be created in Standard without wanting to start with writing out "4x Oko, Thief of Crowns". It's also worth mentioning that its synergy with so many different cards in Standard is just on an entire other level.

A Green splashy effect like this just simply can't be ignored! It's also an effect that has a very real chance at becoming an engine to build around in Constructed. I'm so excited about this card. It provides an invaluable tool that isn't normally available all on one card's text box. This card single-handedly takes care of many of the pitfalls of deckbuilding that one would normally have to use suboptimal cards in the past.

How could I not choose three Green cards!? Not only are the references absolutely amazing; I simply just love this card. Every time there's a unique and creative take on the simple but profound Birds of Paradise--it's an instant hit with me. Gilded Goose may not be flashy to most, well, other than being made of pure Gold; but, I feel it's going to be a very important card in Throne of Eldraine! 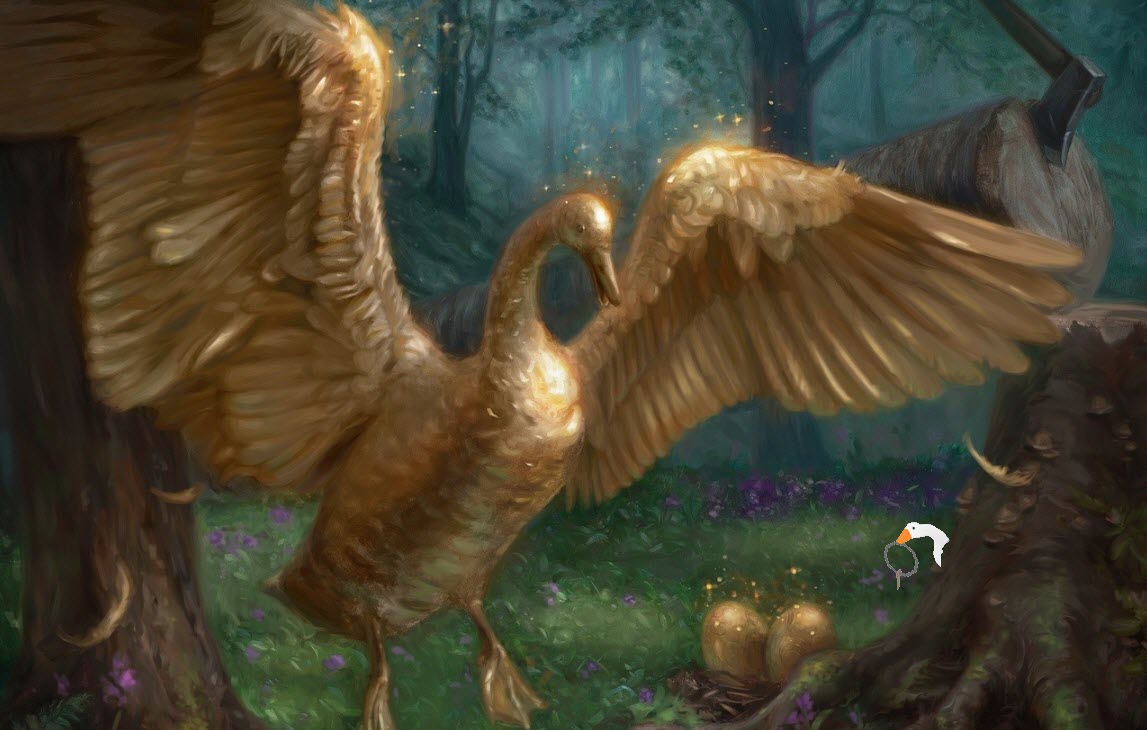 This month Cliff Daigle runs down all the new tiers of premium cards that are about to hit the market. 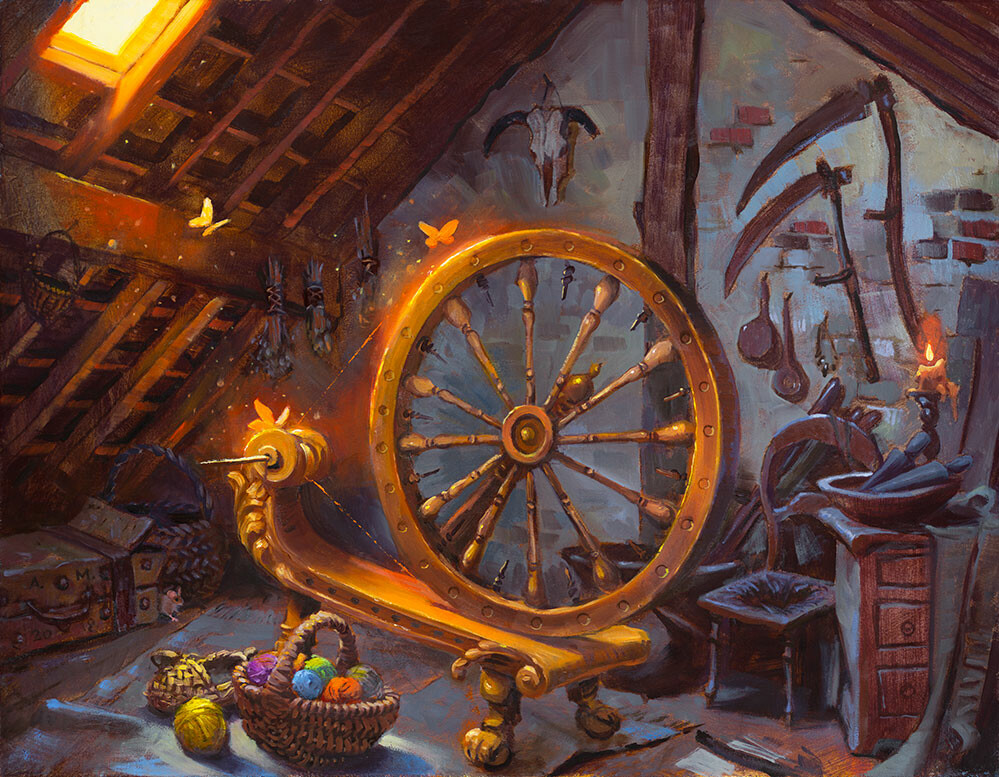 Lord Tupperware's got 8 cards from #MTGELD he wants you to think harder about before passing.