Ikoria is finally here, and boy do we appreciate a treasure trove of new cards to pore over, given that most of us are socially isolating ourselves if we are able. And with this new plane come some substantially pushed mechanics, speaking both in terms of design and power level, in Mutate and Companion. This is what Magic players love. Or love to hate. Magic is about pushing boundaries, even when we don't all agree on whether the changes are positive or not. We are a people fed by change.

Getting Ikoria into the Cardsphere Draft & Sealed Simulator with coherent synergy rules was a fairly challenging process, but after our first round of updates, gathering ratings information and archetype evaluation from many sources, we're confident that it is the best way to practice against non-humans (ha! Mutate on THAT) available anywhere. If you're used to bot drafting on Arena, and looking to get some practice in before you start throwing away gems versus real players, we got you.

Joining us this time round are two article contributors, Guillaume Robert and JD Mckeehan. Let's see what everyone thinks.

I'm a self-proclaimed Johnny that is probably just a Timmy in denial, so big monsters with a Gozilla coat of paint over them has got me really excited about the set. Although my picks always reflect the fact that I am primarily a commander player, Ikoria has enough interesting stuff in it to lure me back into Arena standard at least for the time being.

Although the new mutate mechanic and the kickin' rad Godzilla art have been the most talked about aspects of Ikoria, the most intriguing part for me is the new ability counters.  Space Godzilla aka Void Beckoner is the card that really made me stop and realize how cool this could be in commander, mostly because of the ability to give any creature deathtouch at instant speed, but it really opened my eyes to the possibilities of being able to move those ability counters between permanents in commander.

I can't read the name of this card without hearing the bass line in No More Tears and thinking that it should be the name of an Ozzy Osbourne album.  The second thing I can think of us how awesome The Ozolith would be in commander, the first one coming to mind being Vorel of the Hull Clade.  But really, since the ability triggers on anything leaving the battlefield means things don't have to die in order to redistribute the counter wealth, I would love to see this thing in action in a Pir, Imaginative Rascal / Toothy, Imaginary Friend deck.

The more I hear people complaining about this card the more I love it. You can make a case for including Crystalline Giant in almost anything, in fact I'm already trying to get a copy on Cardsphere for my Alela, Artful Provocateur commander deck which I just finished building and have not even played with yet. This is also one of the cards that has lured me back into Arena standard, although I'll probably just put it in my Alela Brawl deck and be satisfied.  I love the Mechagodzilla variant, but although I realize it's not as flavorful, I probably won't play with it since it's not in English.

I haven't had a chance to play or watch much Ikoria yet, but barring a few concerns about the presentation of Mutate on Arena, and the comprehensibility of it around the kitchen table, I'm pretty enthused about the set.

Of all the big rubbery monsters in the Godzilla universe, Mothra was always my favorite. I had hopes for the card, but free reanimation with a serious upside?  I just wish that Luminous Broodmoth was legendary so I could build around for brawl.

Is it too groanworthy to start referring to the ability as 'unflying'?

I love Clash of Titans for my red Commander decks, and of course in Limited. Surprise, now fight! The only question in my mind will be do I want to make one of my friends really angry, or two of my friends mildly upset. These are the decisions I live for while I sit there flicking cards and scheming.

I have been consciously trying to enjoy the art and flavor of Magic more, and so usually try and include one card on that basis alone when I make my picks for a set. Mythos of Brokkos is definitely my favorite art of the set. Seb McKinnon just keeps delivering. The art here evokes that found in Cueva de las Manos in Argentina, Miyazaki movies, and Drew Tucker's best work simultaneously. Card's pretty sweet, too.

As is now tradition, I watched over twelve hours of the Ikoria Early Access Event on Arena gameplay on Twitch, and was thoroughly impressed by a few cards – to be fair, by many more than I was expecting. Here are my Top 3 cards for Standard play:

Starting with an extra card in hand every single game is a big deal, and even more so when it makes everything else cheaper. I have seen Umori, the Collector in many different archetypes, from Abzan Aristocrats to Temur Elementals, but where it truly shined was in Crokeyz’s Umori Affinity list when set to “Artifact” and coupled with Mystic Forge. Totally my style of play and I’m hoping to snag a set soon.

Narset of the Ancient Way

The first thing to realize is that Narset of the Ancient Way is essentially a 3 CMC Planeswalker, thanks to her +1 which will matter in the longer games in Jeskai Control shells where she shines best. The other major aspect that players realized upon running her in their decks is that you rarely have a dead card in your hand because of her -2 ability:

And the best part? With the -2 ability, you always get to draw but the discard is a “may”! I think we will get to see Narset shine in a few decks, from Control to Midrange.

If you thought the Temur Flash deck was annoying, wait until you meet Cunning Nightbonder. She is already shining into the Dimir Flash build that was heavily featured in the Early Access Event, and I would not be surprised if she found a slot in the Temur version either. The potential for Nightpack Ambusher coming in on Turn 3 is terrifying, but so is this line that happened on Stream: at the end of your opponent’s Turn 4, you could go Cunning Nightbonder into double Blacklance Paragon for a casual 8 power in play. Yikes!

He's one of my favorite artists and before this, the only Basic he's done is a single Mountain, but now he's done all 5, so I can make a Jesper art commander deck in any of 6 different color combinations.

I'm a big fan of Seance and I really want to mess around with this card in Standard and make some silly decks with it.  I feel like you could do some silly self-mill stuff with things like Mire Triton then make 1/1 copies of the Cavaliers from M20.

I love these BW 2-3 mana exile/destruction spells and am always happy to see a new one.  Just in Standard, we already have Despark, Final Payment, and Mortify.  At the very least, this seems better than Final Payment. 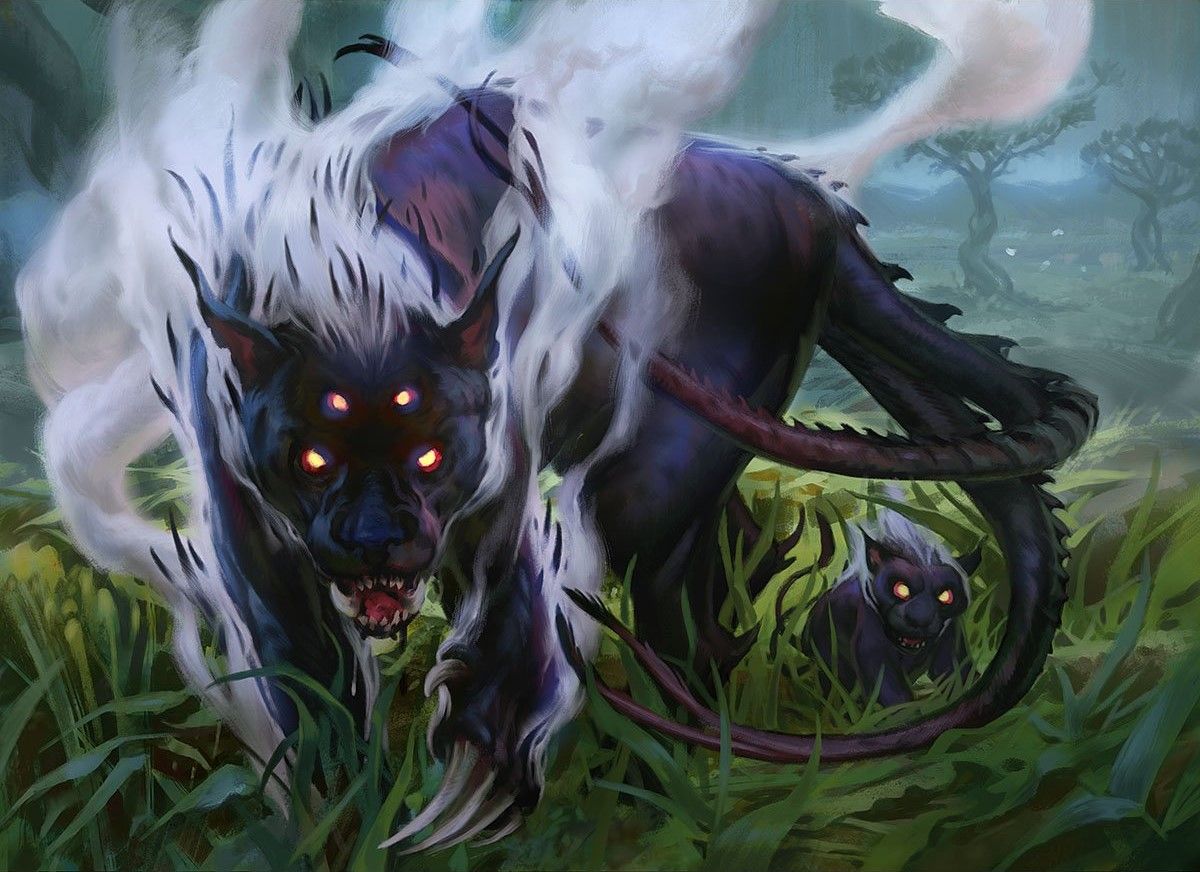 Cliff Daigle shares his opinions on where the pricing will end up for our new Companians, and the impact of the delayed paper release on the market. 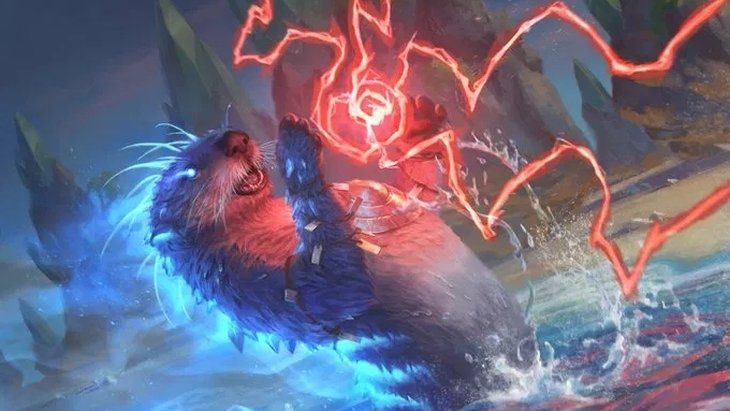 Like many of us, Darin Keener's trying to work out what he thinks of Companions. Here are his ranked list and thoughts so far.