As vaccination rates continue to improve, local game stores are opening their doors once again, gracing us with the sweet, sweet smell of freshly cracked packs. That's right: drafting in person is back! That said, many MTG players today have played the game almost exclusively online and have never drafted in person (or it has been a very long time). In this article, I aim to demystify in-person drafts. I'll provide all the details you'll need to have a great time back at your LGS.

Hi! My name is Zach and I'm a co-host of the Draft Chaff podcast. On the show, my co-host Ben and I focus on the fun side of limited. Occasionally we'll discuss spike-oriented content (like Vector Theory), but we spend most of our time discussing how to have as much fun as possible. And one of the ways we most enjoy Limited is in person.

Before we get into the thick of what drafting in person looks like, I want to take a moment to express that it's important to stay safe and take the right precautions for your area. Variants of COVID are cropping up regularly it seems and every area has different guidelines. Make sure you're familiar with what your LGS requires, such as masks or proof of vaccination.

Ultimately, the point of this game is to have fun, whether by winning or just messing around with friends, so make sure that you respect the people around you by keeping them (and yourself) safe. With that, let's talk about events.

Rule 0: If you're brand new to in-person events, it doesn't hurt to give your LGS a call and let them know that you'll be showing up. Often, they'll do what they can to ensure you have a good time. They may even introduce you to some regulars who can help you along in your first event.

You won't need a pre-constructed deck for a limited event, but that doesn't mean you should arrive empty-handed. There are a few things that I recommend bringing along.

First, you'll need something to track your life total during games. There are plenty of options available to you here, from dice to elaborate spindown counters. But my go-to is simply a pen and paper. Small notepads, sticky notes, or even an 8x11 sheet of paper folded up work wonderfully for this purpose.

That's all you really need to get through your games! But there are a few quality-of-life improvements to be had.

It's never a bad idea to bring sleeves with you when drafting in person. This isn't something we tend to think about on Arena or Magic Online. You have to handle the cards yourself and shuffling without sleeves is cumbersome.

Save yourself the headache and pick up a pack. Your LGS should have plenty to choose from. Good sleeves typically cost about $10-15 and you can reuse them every draft for the foreseeable future!

One more note on sleeves. Though most of the cards in a typical draft aren't going to be very valuable, sleeves do provide extra protection for your cards as well. No one wants to open a Ragavan, Nimble Pilferer during an MH2 draft without any sleeves around to protect it! It also helps to have access to counters during games. D6 dice are perfect for this.

Lastly, these FNM or GP style events typically have some downtime between rounds. During that time it's common for players to mingle, explore each other's trade binders, or even jam some quick constructed games in various formats. If you want to participate here, be sure to bring a trade binder or Commander deck (depending on the popular format in your LGS) with you as well.

If you're playing in a sealed event, you'll be given your six packs and get right to deckbuilding. It's a fairly similar experience to that of online play.

A draft event, however, does have some nuance of which you should be aware. Newer players may not have realized this, but in draft, the packs are passed in specific directions at specific times. Pay attention to the little bar at the top of the draft window in Arena and you'll notice this.

At the start of the draft, each player receives three packs. They'll open one, take a card, and pass the pack to their left. This process repeats until the packs are empty. Then each player opens their second pack. This time, players pass the packs to their right. The third pack is then passed to the left once again.

If you want to look like a professional in-person drafter right out of the gates, there is some etiquette to which you should adhere. First, avoid making exclamations during the draft. No one wants to here someone yell out "HOW IS THIS STILL IN THE PACK?!?" It's rude and insults the other folks at the table. If you really need to know why something made it around to you, politely ask your opponents after the draft is finished.

"Hey, you seemed to be in Green. Why didn't you take the Owlbear you passed me in pack 2?" This comes across as you genuinely attempting to understand your opponent rather than blatantly calling them out for making what you consider to be a wrong move.

Next, be mindful of how many packs you're passing.

We've all seen in Arena where a single player has 6 packs in front of them and the rest of the table is waiting. When you're handling physical cards, these pile-ups can lead to a mess. Players forget which order their supposed to be picked up in, or the cards get bumped and accidentally shuffled around. Believe me, you don't want to deal with all of that.

There is a small caveat to this. It depends on the level of the event you're playing in. Typically, FNM events are casual enough that you won't offend anyone or break any rules if you look at your cards whenever you have a free second. For more competitive events, stick to checking your cards only between packs as I mentioned earlier.

Once again, gameplay is nearly the same as online, save for the fact that you're sitting in front of another person! Say hi! Strike up a conversation or ask how the draft went.

When you sit across from your opponent, you'll shuffle up your deck and typically offer to let them "cut" your deck as a show of goodwill. Players roll to see who goes first, then draw their starting hands of 7 cards.

For those players who have gotten used to best-of-1 games on Arena, it's worth knowing that almost all in-person events are best-of-3 so be sure to keep in mind cards that you might want to sideboard in subsequent games.

There is one other glaring difference between in-person and online play, and this is the biggest hump to get over for new players. You have to handle your cards, remember your triggers, and manage the stack yourself. There is no game engine behind the scenes doing these things for you.

The tactile part of MTG is one of my favorites, but it is also one of the most annoying at first. Handling your cards can be frustrating for new players. You have cards in your hand and cards on the battlefield. You have cards in your graveyard and your deck. These all take attention and space to manage. It can be tricky at first. Just take your time, move through steps and phases methodically, and you'll do just fine.

Don't forget to draw your card for the turn! This is something Arena just does for us and can be very easy to forget to do.

One last component to physical drafting that I want to mention is the idea of pods. On Arena or Magic Online, you draft in a pod but then play against other drafters who may or may not have been in your draft pod. In-person events are not like this. When you draft in person, you will only play against the people you drafted with.

This means that cards you pass during the draft, you'll be playing against. It also means that the relative power levels of each player's deck will be roughly similar. No more constant RB-mirrors like we had in AFR Quick Draft!

Why Play In Person?

The biggest draw for me to play in person is the human interaction. There is simply an amazing aspect of Magic that we have been missing out on for the last 18 months or so without in-person events. The conversations to be started, the friends to be had, and the experiences to be made are irreplaceable. This is where Magic earns "The Gathering."

I find that when I play in person, those above features eclipse everything. One interesting side effect of this is that often winning is less important to me. I'm more likely to try out janky decks just to get a laugh out of my opponent. There's no stress about meeting a certain win-loss record so I can earn my Gems back.

Sure there are prizes to be won, but when you're playing one event a week, the pressure to perform well enough to make back your $15 is less prevalent. And no matter what, you're walking away with the deck that you drafted.

In person, you have the opportunity to discuss your picks with folks after the draft or discuss your gameplay decisions after a match. These conversations lead to valuable learning experiences as you play more and more difficult opponents.

Not to mention, there are no stops in place. You can actually bluff in person! Drew a land for your top-deck? Spend a few seconds to think about your play and keep your opponent on their toes! There's no auto-pass in effect.

If you came into this idea of drafting in person feeling hesitant, I hope you're now feeling confident and excited to take on this new experience. It truly is the best part of Magic and I'm thrilled we're getting to return to it more regularly.

As a recap, there are a few things you should bring with you:

Don't forget that you're interacting with real humans. Be polite and courteous. Respect those around you by adhering to LGS guidelines, especially those regarding health and safety. And most of all HAVE FUN!

I'd love to hear about your first experiences with drafting in person. Feel free to share them with me on Twitter or jump into the Draft Chaff podcast Discord. We have an awesome, growing community there. We also did an entire episode on this very topic with Chris from Pass Left Drafts, if you're interested in hearing us talk more about this.

We're all excited to be back on Innistrad with new commanders to consider. Andy Zupke digs in on Wilhelt, the Rotcleaver with this awesome deck list. 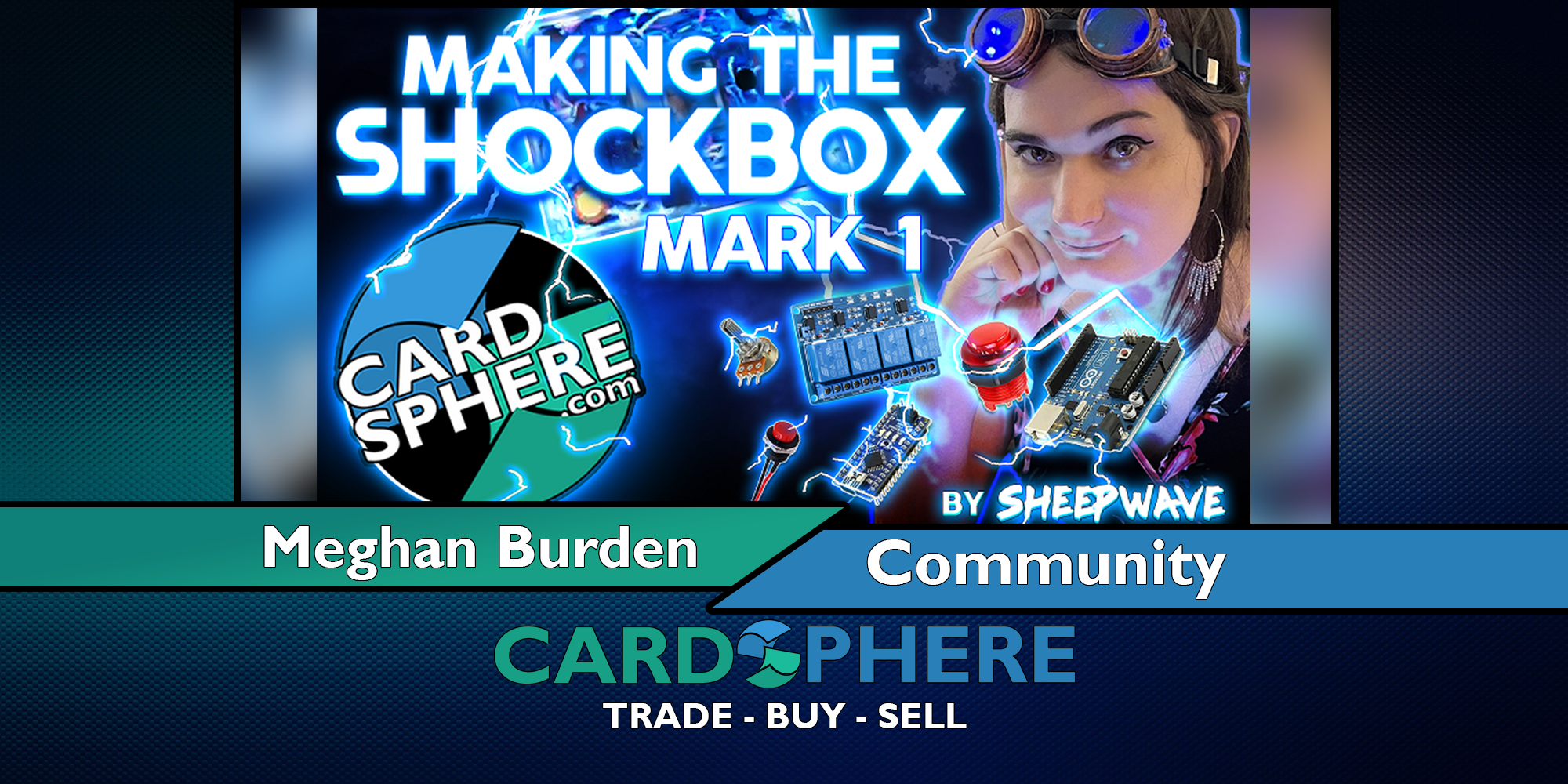 Sheepwave provides juicy details on how she designed and assembled the Shockbox! This is seriously one of the best Magic projects ever.

Trading Posts
—
A Comprehensive Guide to Drafting in Person
Share this