Draft is a complex format, which often makes it intimidating for newer players. To make things even harder, MTG Arena has several offerings for Draft (Quick, Premier, and Traditional) which means that even when you've decided to Draft, you still have to choose which one to play! In this article I am going to discuss what makes each offering unique, and how you can adjust your strategy and approach for each mode. The focus will not be on the EV of the events (I'm not an Arena economy expert), but rather on which event might be the best fit for your skill level and some adjustments you can make to maximize your odds of success in each event. Let's dive in!

When you are first learning to Draft there is a ton of information being thrown your way. There are new cards to read, challenging signals to interpret, and a host of other things which can make it feel overwhelming. This is why Quick Draft is often a great starting point. In a sentence, Quick Draft is a draft against bots followed by best of one gameplay. There is no time constraint for your picks and you do not need to worry about the complexities of sideboarding and post-board games. The bots are also generally worse drafters than players, so you will more frequently end up with a solid deck (though keep in mind that your opponents will as well).

The best feature of Quick Draft is that there is no time limit for your picks, so you have time to read and understand every card. This immediately removes some of the worry associated with Draft (that you will have to panic pick because you run out of time), and because signals are often difficult to read as a newer player, it will not matter as much that you are facing bots. Quick Draft is also great if you have friends who you can ask about tricky picks, since you can wait as long as you want to make the pick and are facing no time pressure.

The gameplay is best of one, so each round you face a new opponent and get to see all of your cards in a variety of situations. As with all best of one games on MTG Arena, there is a hand smoother at work, which means you are more likely to get functional opening hands and play a relatively straightforward game of Magic. One mixed blessing is that Quick Draft is ranked, so as you get wins you will rank up and the caliber of your opponents will increase.  This means it is more challenging to have a sustainably high win rate once you get to a rank that reflects your skill, as your opponents will be at your level. This is actually benefits you if you are trying to improve, as you will learn more from challenging matches than from ones where you stomp inexperienced foes. One final perk is that the entry fee is  cheaper for Quick Draft on Arena so you don't have to worry as much about losing all your gold and gems while you learn how to Draft.

If you are spending a lot of time doing Quick Draft you will start to identify "bot trends," where the bots undervalue certain cards and thereby allow you to take advantage of their tendencies. Be warned that if you pursue this strategy (or it just happens passively, which is inevitable to some degree) it will not carry over well to real person drafts in the other queues. Also, if the bots get updated you will need to be flexible and able to identify the new tendencies, which can either be viewed as a fun new challenge or an inconvenience. Overall, Quick Draft is a great option when you are starting out due to the lack of time constraints, but it does not have the strategic depth of an in person draft due to the way bots function.

In Premier Draft, like in Quick Draft, there is ranked best of one gameplay (so there is a hand smoother and no sideboarding), but you now draft against real humans! This means that there is a timer for each pick and signals are more nuanced, making things a good deal more difficult. With a clock on your decisions, you have to be able to quickly identify and evaluate the cards in the pack, as well as read the signals sent to you by your fellow drafters. If you are not familiar with the cards and not good at evaluating things on the fly, I highly recommend looking up the card image gallery for the set you are drafting in advance so you can have some baseline evaluations to go from (or you at least have read the cards before).

If you are new to timed drafts, I recommend narrowing each pick down to a choice between the best card in the pack and the best card in your current colors, as this makes things less overwhelming (this is also just a fine strategy in general). If you are more experienced with draft but unfamiliar with the cards in a particular set, it can also be beneficial to lock in your two colors earlier so you only have to read and evaluate cards in your two colors. I also want to note that when you do a Premier Draft, you will play games against other Premier Drafters, so you do not have to worry about facing an opponent who has just drafted an insane deck in Quick Draft by exploiting the bots.

Traditional Draft is the closest thing to the drafting experience you find in the real world. In addition to a timer for your picks and drafting against real players, you now play best of three matches and will be sideboarding after the first game. Another big difference with Traditional Draft when compared to the other two modes is that it is not a ranked format, which means you do not face steadily more difficult opponents as you do well (which means that if you are a highly ranked player your opponents will be a little easier than normal). There is also no hand smoother in Traditional Draft games, which means your opponents will curve out less frequently and the games will be a bit slower paced. This gives you more time to develop and get your defenses set if you are a control deck, and it means that if you do draft aggro you will need to make sure you have a good curve that can consistently curve out without the aid of the hand smoother.

Sideboarding is a complex topic that could be the focus of an entire article, but if you have never done it before, I'll outline two simple sideboarding methods here. The first type of sideboarding you want to do is based on matchup speed. If your opponent is playing a fast deck, it makes sense to remove some of your expensive card advantage or slow top end cards for a mediocre two drop or cheap play that can help you stabilize. The second type of sideboarding is based on specific answer cards you have. If you see multiple good artifacts and enchantments from your opponent, Naturalize becomes a good card (even though you would never maindeck it), and similarly Plummet can do great work against a deck with many flyers. Once you get familiar with those main methods of sideboarding, there are a host of small tweaks you can make to improve your deck against what you expect to face from your opponent, but focus on mastering those two first.

Another key part of best of three is that you gain the ability to specifically know what your opponent is playing in post board games. This means that if your opponent casts Big Play in game 1, you can play around it in game 2. If you are not used to doing this, write down your opponent's instant speed cards while you are playing so you have a handy reference sheet available whenever it looks like something tricky might be afoot. Personally, in best of three matches that I really care about winning, I write down all of the cards my opponent plays so I can have as much knowledge as possible. This helps me when I am deciding what to play around in combat, but also aids me in deciding whether to cast my removal spells now or if my opponent has a threat for which I should save my removal. It also gives me a mental boost when I can look at a list of my opponent's cards and quickly identify which ones would be problematic so I can play around them.

That is going to do it for this overview of the three draft modes available on MTG Arena. Hopefully next time you enter the queue you feel more prepared for the draft and gameplay experience that awaits, and maybe you will even try one of the options that you had never considered before! Until next time, happy drafting! 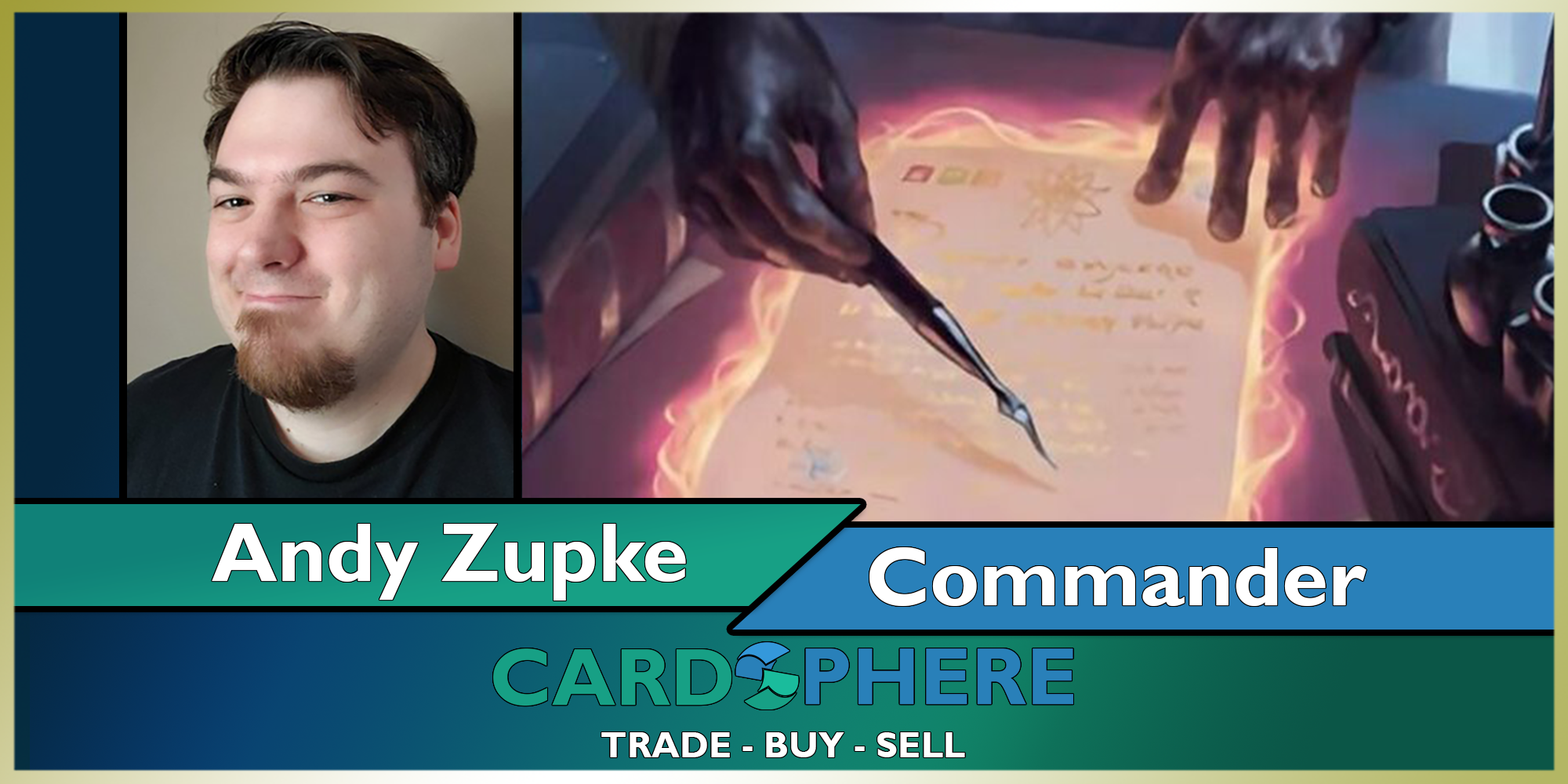 Nothing gets people talking rule zero like a hate card being printed that nerfs their pet deck. Andy Zupke's no exception.

On this week's episode we talk about: Ohio offering lottery to get people vaxx'd, A new BIPOC scholarship, WotC removing the MPL, NVidia making it easier to get their graphics card, and casual always being a strong part of gaming culture.

Trading Posts
—
Which Arena Draft Mode is For You?
Share this