Sometimes when you're at at a draft table, you get a vague sense of Deja Vu. A little part of you says, "I've seen these cards before," and that's because you have! When you draft with 7 other players, you will (by design) see many of the packs more than once, and even though the best cards may be gone, those packs are often some of the best places to find valuable additions to your deck! In this article I am going to talk about some strategies you can use to maximize the value you get from these wheeling packs, letting you find good cards for your deck where everyone else sees chaff.

Oftentimes there are cards in a pack that no one except you will be interested in. These are narrow archetype cards, cards your deck is uniquely prepared to maximize, or just cards that you believe are undervalued. When you see cards like this in an early pack, you can count on that card wheeling when you are making your pick. For example, in one of my recent Drafts I was deciding whether to take the Wizards payoff spell Relic Amulet. In the same pack was the card Chilling Trap, a card that is a solid roleplayer in a Wizards deck and virtually unplayable elsewhere. I knew that I had a high chance of wheeling the Chilling Trap, so I could already start to formulate a Wizards deck knowing that I would probably have 2 payoffs.

Sometimes there are particular synergies that you can notice to set yourself up for later in the Draft. One card I like to keep my eye out for in Zendikar Rising is Zulaport Duelist, particularly because of its synergy with Expedition Skulker. This synergy makes both cards quite a bit better (you flash in Duelist to shrink your opponent's creature and gain surprise Deathtouch), so if I see a Duelist in an early pack, I am going to put higher priority on Skulker in later packs because I know I am likely to get the synergy piece on the wheel. Keeping track of cards like this will serve you well in any format, but especially formats with strong, yet narrow, synergy pieces.

Another common way to use the wheel is to simply count down the next 7 cards you expect to be taken out of a pack, and then remember that information when cards are starting to wheel. Tip: if you are playing digitally and don't trust your memory, a screenshot can be good for training. Knowing what comes back around can help you sleuth out what the table is doing, especially if there is something surprising left in the pack. Always remember that the players around you are also trying to Draft the best decks they can, so if they are passing you strong cards late then it means they are likely going down a different lane.

If I get a strong Clerics card in my first few picks, I don't put as much stock in it because I know the person passing to me has lots of great cards to choose from and is still figuring out their lane. However, if I start wheeling premium Clerics cards, it is far more likely that Clerics are open, because the person passing to me had far fewer options and still elected not to take the strong payoff. If you can avoid choosing your colors until you see what wheels, you can often get a better sense of which color combination is meant for you in your seat.

A third way to use the wheel is in later packs (usually Pack 3) where you take a gamble on wheeling an important card. For example, I recently had a Draft where I was playing Blue Black Rogues and I opened a Soaring Thought-Thief. Normally this would be a slam dunk pick, but based on previous wheels (and a last pick Deadly Skulker in Pack 1) I decided that it was likely no one else was in rogues. This let me take an Into the Roil (the best Blue common in my opinion), and then attempt to wheel the Thought Thief, which is what ended up happening. When taking a calculated risk like this, it is important to remember that decisions in Draft should be taken to maximize your aggregate win percentage. If the card I want is going to wheel 50 percent of the time, then I can treat the value of Into the Roil as how good Into the Roil is plus the 50 percent chance that I also get a Thought Thief. Overall, making picks like this will increase your win percentage (if you do it well), because even though you take a slight hit when it does not work out, you get a massive payoff when you are successful, essentially doubling your number of premium cards. This wheeling strategy is best used as a tiebreaker when deciding between two powerful cards, as a slight chance that you get both in your deck can sometimes be enough to sway you to a pick.

Cards You Only Take on the Wheel

Sometimes there are cards that you never want to take early, but can form the basis of a deck if you get enough of them. The cards that immediately come to mind for me are Faerie Miscreant and  Merfolk Secretkeeper // Venture Deeper from the heydey of MTG Arena bot drafting. These were cards that would wheel virtually every time, so if you saw one early, you could draft as if they were already in your deck and get them on the wheel. While this was a flaw with Draft bots, the same strategy can be adapted to apply for humans.

Take the case of Akoum Hellhound in Zendikar Rising. This is the sort of card that basically nobody wants, so if I end up in a Red deck that actually does want it, I will still count on it to wheel in packs where I might typically take it. It is always important to consider the idea that the power level of a card in your deck is not always the same as the power level of a card in someone else's deck. Instead of thinking, "I would really like this Hellhound so it's my pick," take a moment and consider "nobody else is going to want it so I can, wheel it and get another card for my deck here."

Cards that get better in multiples are almost always worth noticing early because there is a good chance you will wheel them, and they can be quite powerful. Frantic Inventory from Core Set 2021 is the perfect example of a card that gets actively better when you have multiples. The key with this sort of card is not to take it early, but to notice if you see one in the first couple packs. Then, if you see one around Pick 6 or 7, you can take it with reasonable confidence that the one you opened is coming back around. If it does, fantastic, you've got two strong cards for your deck! If not, you didn't miss out on much (just a relatively late pick to speculate), and you might be able to get there next time.

Well, that's going to do it for this article on using the wheel to your advantage. It's a lot to think about while drafting, but wheely worth it in the end! 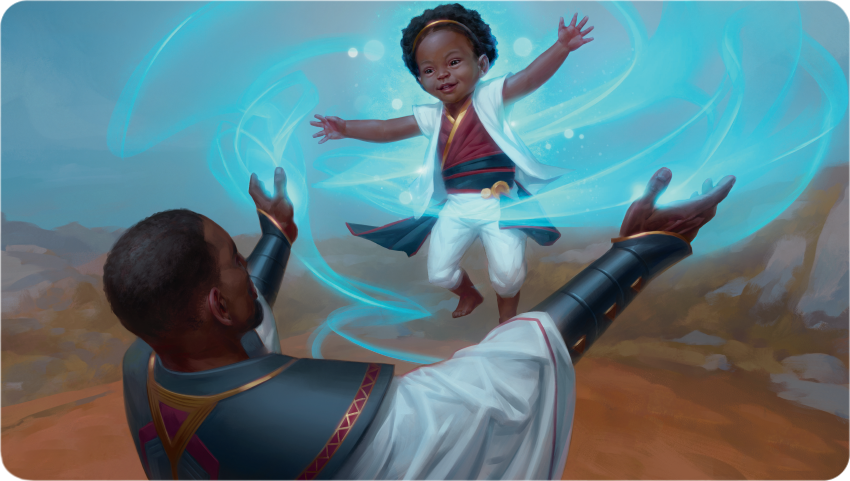 Brian Allen addresses the situation with tasteless depictions of Niambi coming out of the Judge Academy discord, and their response to them.