War of the Spark Limited is finally here! Release weekend with events at midnight, Sealed queues on MTGO and Arena, and drafts at the Mythic Championship have come and gone. And the first week of drafts is nearly at a close. With over a dozen sealed pools and 24 MTGO drafts under my belt, I can safely say that this is one of the most complex formats I have ever played. Are there bombs? Of course there are. As a result the games can often feel very swingy. But because it’s such a Prince format, it rewards finding your lane in the draft itself and having control of the board in game to maximize the potential of your own cards and minimize that of your opponents.

As a host of the Lords of Limited podcast, I get to participate in what I believe to be the single best resource on the internet for draft grinders: the Lords of Limited patreon discord. (I recognize this seems like a shameless self promotion, but mentioning this is necessary for the article that’s to come.) Every time a new set is released, the discord explodes with conversations about draft picks, deck construction, game decisions, and card evaluations as people put their heads together to solve the format. And I truly believe this time we broke it faster than we ever have before. Multiple members, including myself and my co-host, were atop the trophy leaderboard on MTGO at various times through the weeks, many sporting 80% or higher winrates. Today, I’m going to give you a peek into the “Trophy Hype” section of our Discord to see what’s leading our community to have so much success. 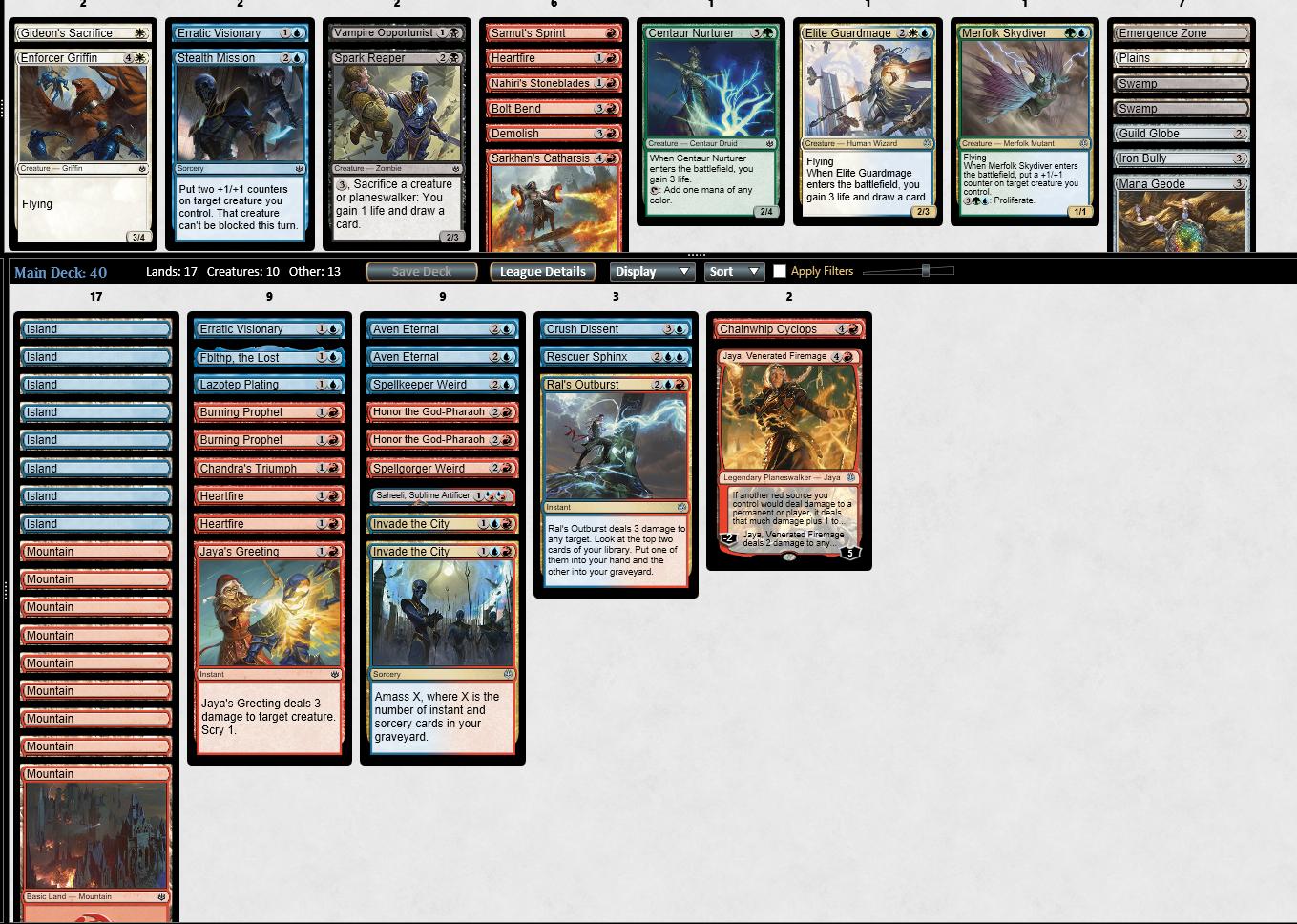 This deck has my early vote for best archetype in the format. Blue is, surprise surprise, the strongest color in this format and I think all four blue decks are viable. Blue is even able to make white playable, which otherwise I think is a difficult task to do in WAR. This archetype has a deep roster of synergistic commons and powerful uncommons to make for very consistent gameplay. In addition to its themes of noncreature spells mattering, it often has an Amass subtheme, allowing you to have “creatures” in your deck in the form of sorceries.

Spellgorger Weird gets top marks as the best common for the archetype as it often reads more like a 3 mana 5/5 or greater if it doesn’t get answered immediately. Burning Prophet is excellent at both providing early board presence and sculpting your future draws, Jaya’s Greeting and Callous Dismissal provide cheap and meaningful ways to interact, and Tamiyo’s Epiphany is one of the best ways to outvalue your opponent in both card advantage and quality. This deck can be on the more assertive side like the first deck above, or grind out a late game with Spellkeeper Weirds like the second deck. Either way, this is one of the scariest decks to face on the other side of the battlefield.

This deck has been incredibly powerful for me. I’ve drafted it three times, and all three decks have trophied. I even had a version with no rares in it, which I think speaks to the power of the commons and the high level of synergy. This deck is just purely trying to outvalue your opponent at every step of the game. Ob Nixilis’s Cruelty and Spark Harvest ensure that you’ll be able to kill whatever threats are presented to you while you fly over and crush your opponent with Aven Eternal and Thunder Drake. The Amass synergies from Callous Dismissal, Lazotep Reaver, Eternal Skylord, Gleaming Overseer and more really add up.

This color pair also has access to some of the best uncommon planeswalkers around in Vraska, Swarm's Eminence, Kasmina, Enigmatic Mentor, Davriel, Rogue Shadowmage, Kaya, Bane of the Dead, and even Ashiok, Dream Render. And one of the most underrated cards in the set, Dreadmalkin, really shines in this archetype. Being able to convert your 1/1 Army token into counters for this menacing threat is big game. I’m a huge fan of this archetype. 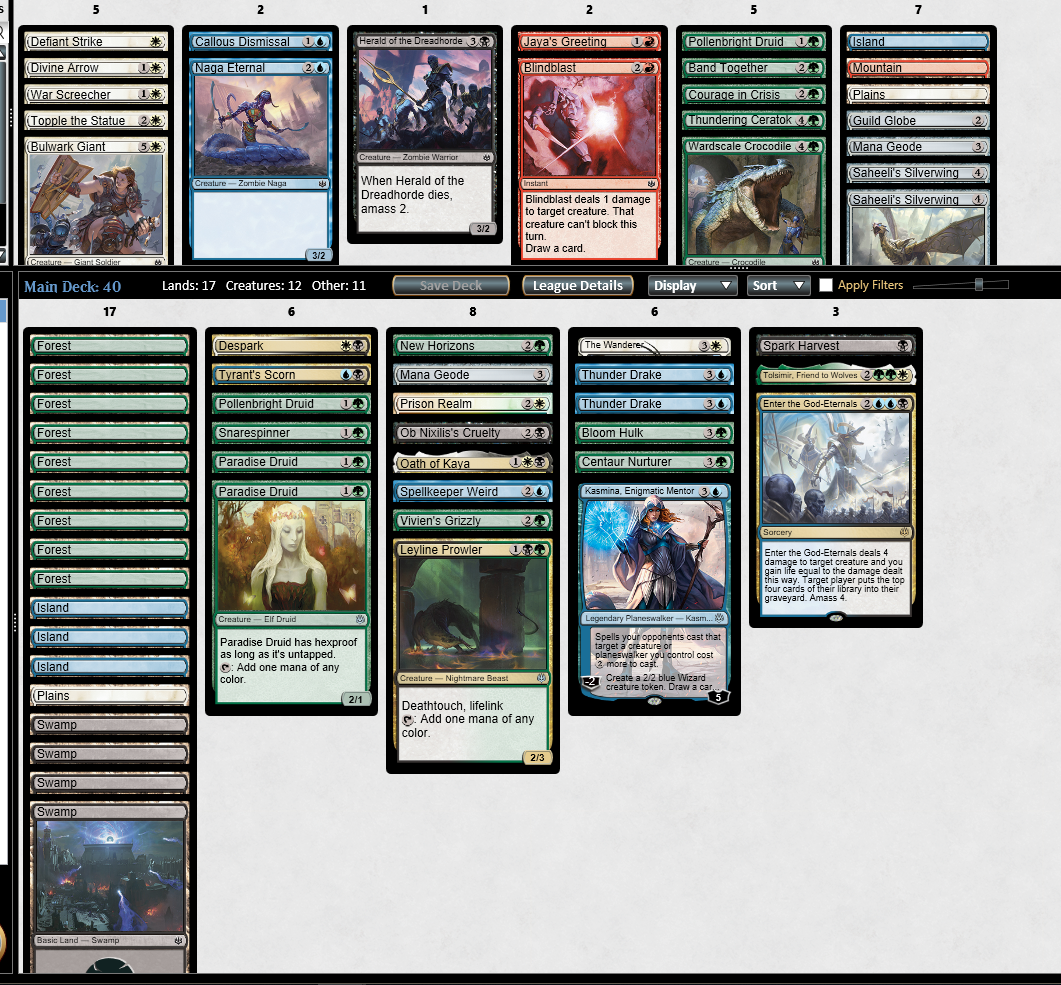 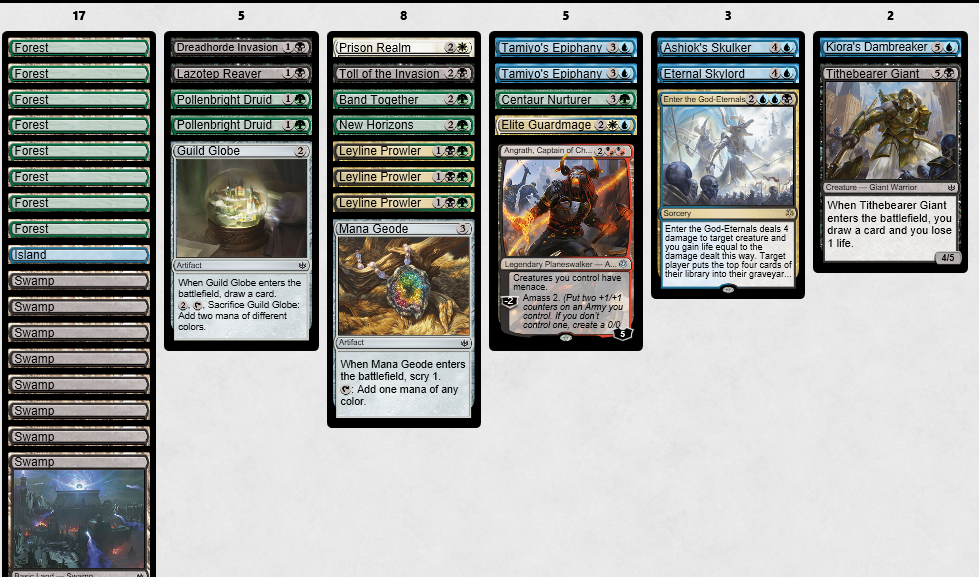 If a lane doesn’t immediately present itself to me in the first half of the first pack, I just start snapping up all the mana fixing I can get. And there is a lot! Mana Geode, Guild Globe, Gateway Plaza, New Horizons, Centaur Nurturer, Paradise Druid, and Leyline Prowler all give you access to the entire color pie before adding any Islands, Plains, or Mountains to your deck. Drafting and building these kinds of decks are very difficult (I plan on writing my next article about how to do just this.) The key to remember is that at your core you are a two color deck and your mana base should reflect that, so you still need 8 or 9 sources each of your main two colors. And then those colors, through the cards mentioned above, enable you to play whatever else you want.

The benefit of this deck archetype in a set like WAR is that the power level is so high, if anyone around you opens efficient removal or bomb rares outside of their two color deck, they’ll pass those along. One of the most important pieces of these puzzles, which you can see in both trophies pictured above, is some form of card advantage. Because you are investing so many resources into fixing your mana, you need some way to recoup that loss. Tamiyo’s Epiphany and Vivien’s Grizzly are two of the best tools at common that this deck has to do exactly that. 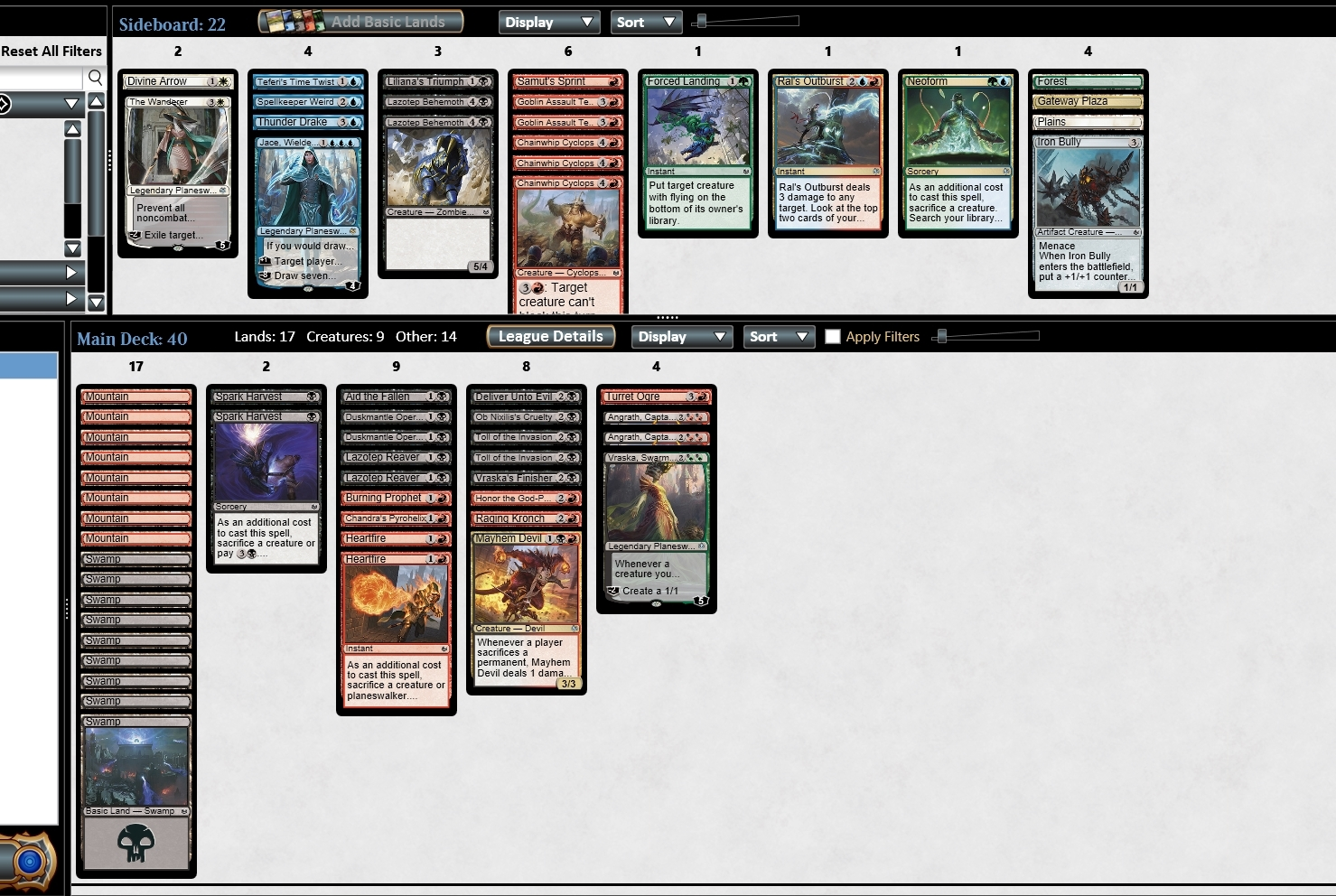 This is one of the decks I was most wrong about when I initially reviewed this set. This deck has the ability to fight on a number of different angles. Firstly, it has the ability to come right out of the gate as a strong aggressive deck. Dreadmalkin into Lazotep Reaver into any number of three drops makes for a very strong start for any deck to come back from. But the synergy is what really pushes this over the top.

Sacrifice effects, Mayhem Devil, Planeswalkers like Vraska, Swarm's Eminence and Angrath, Captain of Chaos backed up by Aid the Fallen can grind out your opponent resource for resource in the mid to late game. Toll of the Invasion, a card that any black deck should be happy to run, shines in this archetype in particular as Amass token synergies are quite strong in these colors. This is probably the best deck that is still under the radar for a lot of people, but I don’t expect it stay that way for long.

These deck are my early frontrunners for the best archetypes in the format. You’ll notice I don’t have white present in any of these decks, which at this point lines up with the general consensus that white is the worst color in WAR. White decks can trophy of course, but I think it will happen at a much lower frequency than these archetypes. You’ll also notice that these decks, even the ones in the Golgari Greed category, are not dominated by rares. This is absolutely a Prince format, but the power level and synergy of the commons is the most important piece of a successful deck in my opinion. As a result, finding the open lane to reap the rewards of those commons is going to be a crucial skill to navigating this format profitably.

The last trend between all of these decks that I want to point out is that a good curve sets you up to winning games of magic in this format. All of these decks are able to affect the board in some meaningful way on turns two and three which allows you to protect your own game plan and planeswalkers while pressuring your opponent’s. I am not advocating for filler cards in these spots, but the premium two drops like Pollenbright Druid, Lazotep Reaver, and Burning Prophet can really start your game off on the right foot. What else have you been winning with? Let me know on twitter! And, as always, happy drafting!

Joe Dyer's take on some of the cards in WAR that may find a place in Vintage and Legacy. 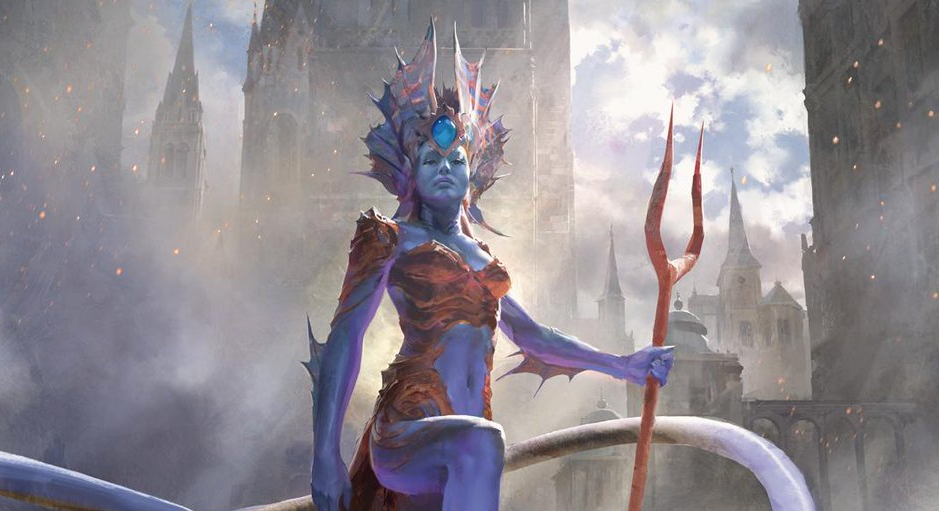 Looking forward into our new Standard, Darin Keener finds a place for Mox Amber alongside a value engine in Kiora, Behemoth Beckoner.