This summer of Magic makes me feel like a kid in a candy store. War of the Spark came out a little over a month ago and has proven to be one of my favorite limited environments of all time. And now Modern Horizons is on the...well...horizon! This set looks to be another slam dunk for draft junkies like you and me. Not since Time Spiral have we seen a set with so many non-evergreen keywords mixing together to create a complex web of endless possibilities. In the hopes of giving you a jump start on the competition, here are fifteen interactions to look out for as you sit down to crack your first packs of Modern Horizons.

The flexibility of Changelings has impressed me since their inception in Lorwyn and I anticipate I will find a large number of interactions in Modern Horizons as well. Here is one that should get the wheels turning regarding what you should be looking out for. Changelings are all creature types at all times, so Goblin Matron will have no problem pulling one out of your library when it comes into play.

The main Izzet theme this time around seems to be triggering effects that care about you drawing multiple cards per turn. There are certainly a number of enablers in both colors, but remember that cycling also counts as drawing a card. The uncommon lands that cycle in addition to cheap cyclers like Viashino Sandsprinter and Windcaller Aven should all do nicely to help make this deck tick.

White is no stranger to paying 7 mana for a 3/3 with double-strike before (looking at you Goring Ceratops). But if you have a Changeling in play, you’ve got all your creature types covered and this card comes in at a huge discount. Universal Automaton on turn 1 into this Valiant creature on 2 is going to pack quite a punch for any white deck. 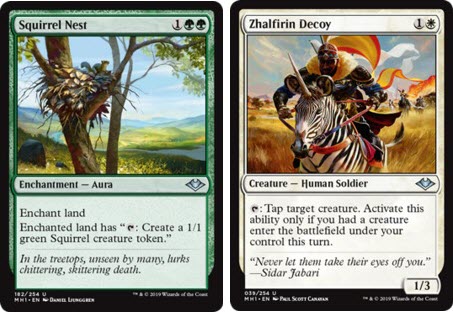 Zhalfirin Decoy looks like a card that will range from game warping to ineffectual depending on your ability to consistently produce creatures each and every turn. Squirrel Nest is one of the most consistent ways to do just that. And it also allows you to use the tapper on your opponent’s turn which turns the Decoy into a top tier common in any deck.

The obvious way to get two +1/+1 counters on Martyr’s Soul is to convoke it with 3 creatures. But that doesn’t exactly let you curve out with it on turn 3. You could, however, cast it on curve and flicker it a few turns down the line with Soulherder when you have nothing else to cast and that would allow it to come back into play as a 5/4.

Volatile Claws is a card that I anticipate will be much better than it appears. Blades of Velis Vel is an obvious comparison and that card consistently overperformed. I imagine that the most powerful place for this card will be in a slivers deck. It won’t be too difficult to set up an alpha strike with a Cleaving Sliver in play and fire off a Volatile Claws to give all of your creatures +4/+0 until end of turn. Double Trumpet Blast? Yes please! 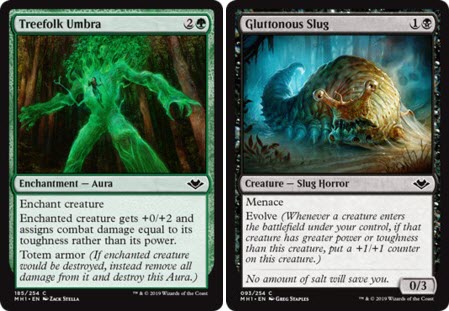 I like big butts and I cannot lie. It’s probably my love of build arounds, but High Alert, Huatli, the Sun's Heart, and Doran, the Siege Tower all really appeal to me in draft. When I saw Treefolk Umbra, I tried to look for the best booty in the business, and, unfortunately, there aren’t many cards that get better with the toughness boost that this umbra provides. However, Gluttonous Slug on turn 2 and Umbra on turn 3 lets you start attacking with a 5/5 Menace creature that grows with each additional creature you play that has power. This is a combo I’m definitely looking forward to assembling.

It's the exception to the rule when a 1 mana 1/1 is playable in limited. I believe we have a number of those present in Modern Horizons and it may take the community at large a bit of time to catch up to the relevance of these cards. Changeling Outcast in particular looks like it will overperform quite a bit in this set.

Much as Tormented Soul was a sure-fire to Bloodthirst enabler for Gorehorn Minotaurs, I expect the Outcast to enable Ninjitsu attacks like no other creature in the set. Not only will it allow you to play Ingenious Infiltrator on turn 2 and draw a card, but it itself counts as Ninja to draw a card each turn while the Infiltrator is in play. Gluttonous Slug gets an honorable mention as a great Ninjitsu enabler. I don’t anticipate your opponent will have enough blockers to spend 2 on a 0 power menace creature, and thus it will be the perfect card to swap for a Ninja in your hand.

In Ultimate Masters, Squee, Goblin Nabob seemed to have interactions with just about every card in the set. While Genesis is probably not as powerful as Squee, it looks like it will have a lot of applications in Modern Horizons. Discard it to a Rank Officer or a Hollowhead Sliver only to bring it back to your hand on a later turn. Or it may find its way to the graveyard off of a Ransack the Lab or Winding Way. Or just through good, old-fashioned creature combat. All right, maybe this card isn’t quite as potent as Squee, but I still think Genesis will have a number of ways to accrue incremental value in this set.

Bellowing Elk and Recruit the Worthy 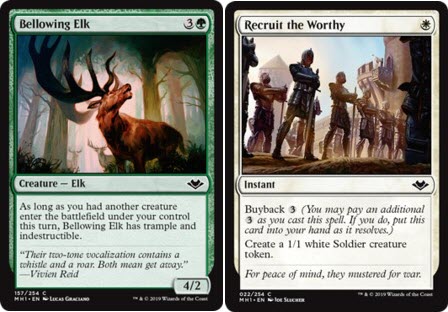 There's nothing like turning an instant speed creature into a combat trick. Blocking Bellowing Elk while your opponent has open white mana on their side of the battlefield is risky business. Pay either W or 3W to buyback Recruit the Worthy and trigger your Elk along the way. That’s pretty big game in making this 4 power attacker indestructible. It won’t take many combat steps with this creature before you’ve decimated your opponent’s blockers or, better yet, their life total.

This isn’t any sort of broken combo, but an interaction you should know about going in. Snow-covered lands are basic lands and as a result can be searched out of your library just the same as regular basic lands from effects like Springbloom Druid or Krosan Tusker, giving you more ways to enable cards like Winter’s Rest and active abilities on cards like Chillerpillar.

When I see an ability like the one tacked on to Scuttling Sliver, I immediately scour the set for all abilities that can be used and abused more than once. Enduring Sliver provides a mana sink for all your slivers to grow, but opens the window for your opponent to be able to attack past the creatures as Outlast is an ability that must happen at sorcery speed. With the inclusion of Scuttling Sliver you can untap these creatures for an additional two mana, allowing these creatures to not only grow but attack or block in the same turn cycle. And speaking of uses for Scuttling Sliver... 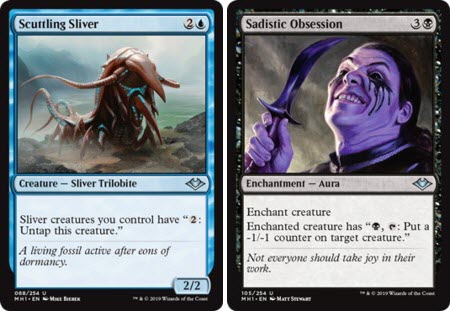 Sadistic Obsession is a card that can take over the game if the creature it enchants goes unanswered. If you place it on a Changeling or Sliver while the Scuttler is on the battlefield, it only accelerates the power of this aura. This combination gives your enchanted creature "2B: put a -1/-1 counter on target creature" which is something I hope to assemble many times in this format.

Fans of Modern will be familiar with the infinite life gain combo that is Viscera Seer, Kitchen Finks, and Melira, Sylvok Outcast. And we’ve got something quite similar in limited here with Good-Fortune Unicorn and a creature with persist like Lesser Masticore or Putrid Goblin and some free sacrifice outlet. Altar of Dementia is the most powerful as it can deck your opponent in one turn. At the uncommon level, you can also add an infinite number of +1/+1 counters on Carrion Feeder or, if your persist creature is a goblin, can drain your opponent out with Sling-Gang Lieutenant.

Oneirophage and Rain of Revelation

Oneirophage, as a flyer that gains a +1/+1 counter on every one of your turns can really get out hand. But if you’re interested in accelerating the process, why not try drawing multiple cards per turn? There are a number of ways to do this, but Rain of Revelation gives you three counters in one shot. And at instant speed, can even do double duty as a combat trick with a permanent effect on your creature.

I don’t know about you, but I cannot wait to dive in to this set. I’m sure there are more than just these fifteen interactions to look out for and I’m so excited to see all the hidden treasures that Modern Horizons has in store. What other combinations are you planning to exploit? Let me know on twitter! And, as always, Happy Drafting! 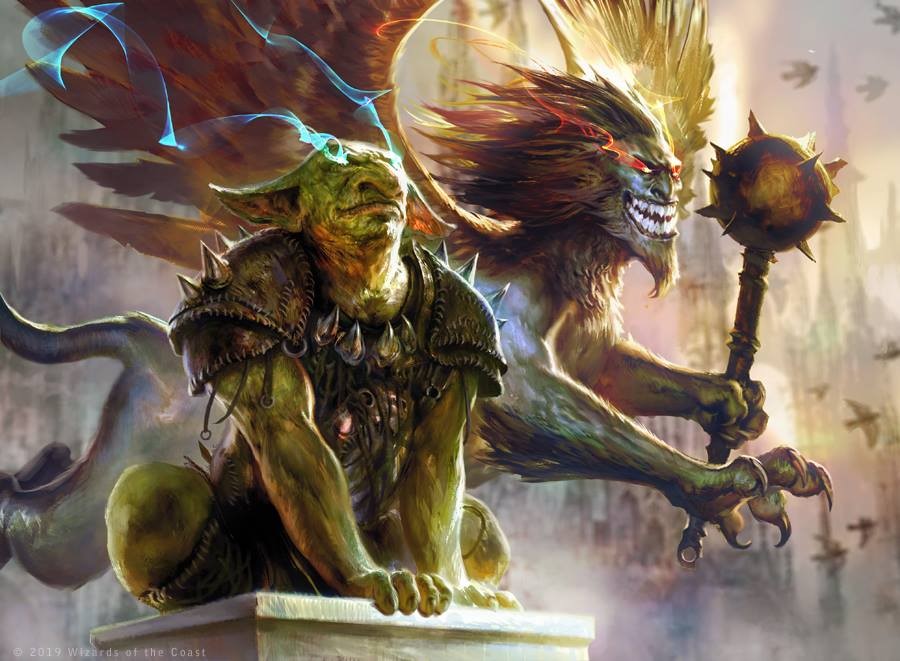 Cliff Daigle returns with a last look at War of the Spark and some nice pickups you might want to consider.

Your neighborhood Johnny Slivers returns to review Modern Horizons with an eye on where new cards slot into Commander. #mtgmh1

Trading Posts
—
What Card Interactions are on the Horizon?
Share this