Hello friends! It’s that time of year again. 2021 is coming to a close, it’s getting colder in the northern hemisphere, and I’m hoping everyone gives me Magic cards for Christmas. And as every year ends, we look back at the last 12 months and pick out the highlights. So today we’re talking about all things 2021 and selecting the best cards for the Commander format. We’ll get to my top 10 cards of the year, but first, let’s give out a few awards. Shall we?

We had some real stinkers with mechanics this year. As fun and flavorful Kaldheim was, Boast was completely undercooked, with only 17 cards. And Cleave, from Crimson Vow, was clunky and over costed.

But we also had some really cool mechanics this year. My pick for the best is Magecraft. Straight outta Strixhaven, Magecraft gave us a sprawling variety of effects whenever you cast or copy instant and sorcery spells. And we got them in every color, giving spellslinger decks a boost all across the spectrum, with Witherbloom Apprentice, Archmage Emeritus, and Storm-Kiln Artist being some of the best creatures to showcase it, and with no less than 6 potential commanders with the ability. Second place goes to Foretell.

Underplayed Card of the Year

This was an easy choice. Y’all are totally sleeping on Augmenter Pugilist // Echoing Equation. The Echoing Equation side is incredibly powerful. I play this one in my Imoti deck and let me tell you, having all your creatures become a copy of Artisan of Kozilek or End-Raze Forerunners is game-ending, and grin-inducing. You should also take a look at Nils, Discipline Enforcer. I’ve really been enjoying playing him lately.

Overhyped Card of the Year

This award was also easy to pick. Archaeomancer’s Map has a solid ETB effect and a potential do-nothing triggered ability. I think I’ve seen it played once. I own one and have yet to put it in a deck. It’s just okay, and not worth the price it’s sitting at.

This year didn’t provide us any ridiculously powerful, utterly broken commanders. And that’s okay. We don’t need more Urza, Lord High Artificer. But what this year did give us for legendary creatures is variety. Wow, did we get that. We got over 180 new legendary creatures this year (plus Grist, the Hunger Tide, which can be your commander because of quirky rules wording). And while some people may bemoan the deluge of possibilities, I welcome it. I think it’s healthy for the format to have so many options, meaning more chances that a commander will speak to someone new to Magic.

So no Urzas or Atraxas. But we did get some really solid commanders. And my pick for Best New Commander goes to Veyran, Voice of Duality. Surprised that the best new commander had the best new mechanic? I wouldn’t be. Veyran is showing you just how incredibly powerful Magecraft is by simply doubling it. And all other instant and sorcery cast triggers as well. Guttersnipe deals 4 damage. Shark Typhoon makes two flying fish. Niv-Mizzet, Parun draws two cards. You get the point. 2nd place for this one goes to Volo, Guide to Monsters.

This category was by far the hardest one for me to pick. It came down to two sets. One of which I love because of how fun it is, and one that is just straight up powerful. In the end, I went with power. The best set of the year is Modern Horizons 2. It’s unfortunate that the price tag on sealed product for this set is so high, making cards like Ragavan, Nimble Pilferer and Solitude way more expensive than they should be, but you do get some serious value in the reprints. Not only that, but there are just a ton of seriously powerful new cards. Instant staples reside throughout this set. It gave us new and wild things, like a Storm commander in green, and a one-eyed guy that can make you a freaking Black Lotus. Runner-up for this one, and it was damn close, is Strixhaven: School of Mages.

The Year of the Board Wipe

Before we dig into my top 10 cards of the year, I want to give an honorable mention. Honestly, all of these cards could’ve been in the top 10, so I’m just going to take the easy route and lump them all together. The cards I’m talking about are board wipes. This year, we had no less than 6 amazing new board wipes printed. First up, from Kaldheim, is Doomskar. This card showcased the fantastic Foretell mechanic, which lets us exile the card for 2 mana, then cast it later for a reduced cost. You can Foretell this card on turn 2 (or turn 1 if you played a Sol Ring, natch), and then it’s there to be cast for the rest of the game. And while you do pay 1 more mana total than Day of Judgment, the flexibility that Foretell gives you makes it so much better.

Next up, from Modern Horizons 2, another super flexible board wipe with Damn. For just 2 mana you can destroy 1 creature, or for 4 mana you can destroy them all! Its built-in Wrath of God capability makes this a slam dunk replacement for WoG in any deck with white and black. And way more affordable than Damnation!

After two great board wipes, you’d think that would be it for the year. But then the two Innistrad sets came along and gave us 2 more. Each! Starting with Midnight Hunt, we’ve got Vanquish the Horde, easily one of the best board wipes ever printed, if not the best. It has a Blasphemous Act-style cost reducer, ensuring that it’s rarely likely to cost more than 2 mana. But white couldn’t have all the fun, so we also got The Meathook Massacre. Board wipe on an enchantment, with an incredibly potent static ability? This card quickly shot up to a $40 price tag, and it’s no surprise.

Last, we’ve got Crimson Vow with another fantastic white board wipe, with By Invitation Only. Not as efficiently costed as Vanquish the Horde, but what you get with this one is more flexibility, and more power. With Invitation, you can deal with pesky things like Indestructible or Regeneration. As many creatures as you want, up to 13, all gone. Then lastly, we don’t want to leave blue out in the cold, so we’ll throw in Consuming Tide. This thing doesn’t just get rid of creatures, it’s all nonland permanents, aside from 1 each player chooses. Then you get to draw cards too!

What You All Came Here For

All right, enough lollygagging. It’s time for the top 10 cards for Commander in 2021. Here we go.

A 5 mana Fog? What? Toss it in the bin! But wait. It’s not just a Fog. You also get a 2/1 flying token for each point of damage you prevented. This turns games completely around. It’s only as low on this last as it is because holding up 5 mana is a big ask, and may telegraph your plans.

Rockfall Vale and Deserted Beach are among the 10 lands in this new dual land cycle, 5 of which came in Midnight Hunt, and the rest in Crimson Vow. This cycle is absolute fire, and I’m happy to have them.

One of the best artifact/enchantment removal spells ever printed. For just 4 mana you take out 3 permanents. Your stuff is safe, and it doesn't target, so it gets around Hexproof or Shroud. The best part? It’s on a creature. Hello blink effects!

Why yes, I would like to tutor for my infinite mana combo. Thank you for asking. I windmill slammed this into my Zirda, the Dawnwaker deck to tutor up Basalt Monolith.

Woof! This card is a beast. As I stated in my review of Crimson Vow, this kraken is basically a repeatable Unsubstantiate. Remember the days when a 7/8 in blue would’ve cost you ten mana and probably made you sacrifice a couple Islands to cast it? Sea monsters have certainly come a long way.

Wanna turn every creature you control into a Changeling? What this card can do in the right deck is astounding. For Atla Palani, Nest Tender, all your creatures are eggs. In Magda, Brazen Outlaw, all of your creatures are dwarves. With Grolnok, the Omnivore, you’ve got an army of frogs. To the “tribal tribal” decks, where many creature types matter, this is essential.

Aside from the fact that this card was a gift for colorless decks, Wandering Archaic can go into any Commander deck and be good. There’s no time when you’ll have this on the board where you’ll regret it. You’re either getting free spells, or you’re slowing your opponents down by making their spells cost 2 more. Win/win. The backside doesn’t exist. Don’t worry about it.

It’s easy to forget the first ability of Storm-Kiln Artist, because you’re just so focused on popping out treasure after treasure after treasure. Eventually you get to a point in the game where you’re suddenly reminded that your dwarf is now massive, and just needs a little nudge in the form of evasion, and suddenly you’ve also got a game-ender. Storm decks can now swim around in pools of money like Scrooge McDuck.

Speaking of treasures, let’s destroy them all! Most of the tokens. Mana rocks. Small creatures. Gone. And in their place you get enough mana to do pretty much whatever you want.

And the best Commander card of the year is: Esper Sentinel

Could it be? Is the best card of the year white? Is it the end times? If you’ve played Commander at all this year, chances are extremely high you’ve seen Esper Sentinel on the table, and if you have, you’ve seen it draw somebody a lot of cards. Hopefully that somebody was you! Lovingly nicknamed “Rhystic Buddy,” this guy goes in any white deck. Doesn’t matter what your strategy is, you want this card.

That’s 2021! Overall, a pretty darn good year. Especially when you consider the fact that we spent so much of the year plumbing the depths of Commander Legends, which came out at the tail end of 2020. I had a lot of fun brewing and playing Commander this year, and I hope you did too.

You can find me on Twitter at @AndyZupke, and catch me streaming budget Commander with the Scrap Trawlers 7:30PM CST Sunday nights at twitch.tv/scraptrawlers. Make sure to check back in two weeks, when we’ll talk about some overlooked commanders of 2021. Until then, take care. And play lots of games!

As well all begin to yet again watch another curve that has nothing to do with mana, Cliff Daigle reflects back on what the pandemic has meant for Magic: the Gathering. 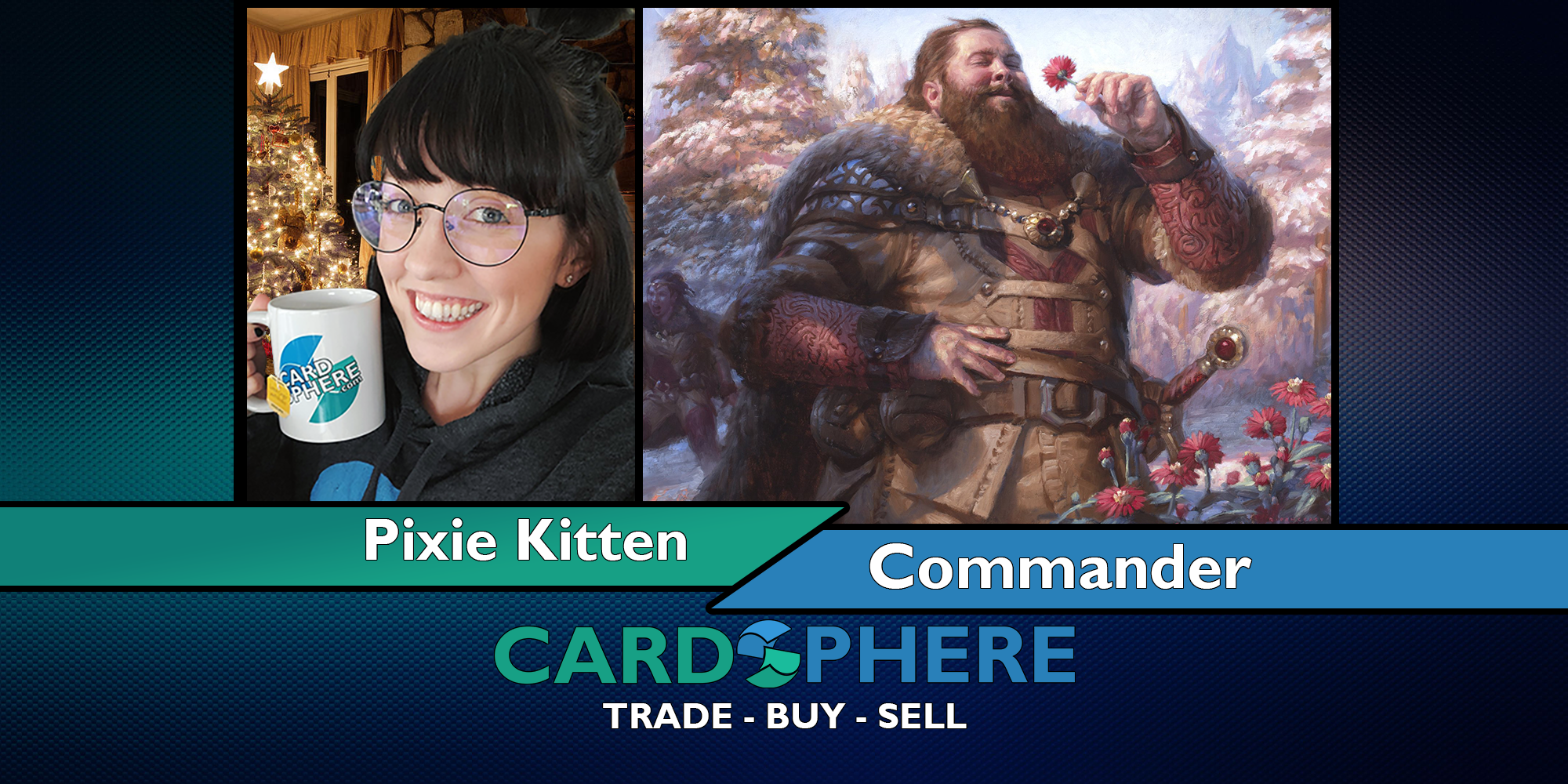 Pixie shows off her first and only Gruul deck to go along with her new pin from Pinfinity.

Trading Posts
—
The Top Ten Commander Cards of 2021
Share this