I have spent years searching but finally, FINALLY, I have found a blue creature to stand up to Tarmogoyf. May I present to you the Blue Tarmogoyf: Pteramander! Like the longtime tormentor of Modern, Pteramander isn't much to look at in the early game. A 1/1 flyer for a single blue mana isn't the worst possible rate but, unless there's some upside, Modern is likely never in danger of drowning in Flying Men.

Thanks to Ravnica Allegiance's Adapt mechanic Pteramander can stand toe to toe with the Delve threats of Fate Reforged as well as that dreaded Lhurgoyf from Future Sight. The trick is finding a deck that doesn't stretch itself too thin to enable Pteramander. Fortunately for my new Salamander Drake friend, we don't have to go too far into Magic's past to find another 1/1 for one blue mana that synergizes with it: Delver of Secrets. A typical Delver deck will gleefully stock the graveyard with instants and sorceries in its quest for victory - a perfect habitat for Ptermander.

The historical downfall of Delver strategies has always been that there was no other 1 mana threat duplicating its evasion and its ability to shorten clocks in a hurry - something Ptermander seems almost actively printed to do. After waiting so long for a functional reprint of Delver, this is as close as we've ever got. I know you Delver fiends out there have already clicked on the video below, but I've hopefully enticed the rest of you to dip your toe into one of my favorite archetypes ever.

After playing with the deck, I was quite happy having access to 4 more virtual copies of Delver. Being a Delver deck, you will always still prefer to see it over Pteramander in your opening hand. You still can't replace the damage output from an early Insectile Aberration, but essentially doubling the odds of getting the ball rolling with a turn 1 threat was as good as I imagined. Like Tarmogoyf and the Delve threats before it, Ptermander needs a little setup to be at full power. Unlike those threats though, you can deploy it turn 1 for anemic yet acceptable beats. The threat of it becoming a 5/5 flier is usually enough to have it attract any available removal, thus freeing the way for future threats much like Delver.

Drawing Ptermander in the mid or late game is when it really shines, however. Having what's essentially a 2 mana 5/5 flier is exactly what the doctor ordered against any kind of opponent. Stabilizing the board against aggressive decks? Check. Attacking through virtually any flier (even the ever-pesky Celestial Colonnade)? We've got you boo. I've never felt less threatend against Tarmogoyf strategies, which UR Delver players will understand to be a strong statement.

The card I was most pleasantly surprsied with was actually Spell Pierce. It feels like Modern has passed a tipping point where even the creature based aggro decks have enough targets for it, especially when a lot of our gameplan boils down to "protect the threat." Even against the few highly played decks where Spell Pierce isn't a slam dunk in multiples (Humans, Amulet, and Tron) you have a few key cards that are vulnerable to a timely Piercing in Aether Vial, Amulet of Vigor, Expedition Map, and Oblivion Stone. Plus, there's always the achievement-unlocked moment of Spell Piercing the turn 3 Planeswalker from Tron. This is a life changing experience. Since the whole goal of the deck is to apply early pressure and protect it, I probably should have expected Pierce to overperform. I'll definitely be testing 4 Pierces going forward and praying for Supreme Verdict to either see a downtick in play or receive a random ban (speaking into existence has been put on the stack).

While I didn't get to live the dream of a turn 0 scry 3 into a guaranteed Delver flip as often as I'd imagined, Sphinx of Foresight feels really great when it happens. Having control over your first three draws puts your gameplan into overdrive. Plus, drawing into it isn't as punishing thanks to the presence of Faithless Looting. Ideally we never get to the late game but having a 4 mana flier that fixes your drawstep after you've exhausted your opponent's removal is not too shabby. You even get to keep reaping the rewards of its synergy with Delver once Sphinx is on the battlefield, making any and all late game Delvers a much scarier threat to flip with Sphinx in play. If Sphinx only had either its opening hand ability or its on the battlefield ability, it wouldn't pull near enough weight in the deck. As it stands, I think this is a synergy worthy of more testing. I'd perhaps like to test some number of Chart a Course or Izzet Charm to reach a critical mass of discard further limiting Sphinx floods in the early game; the kiss of death in this deck.

Speaking of Faithless Looting, I am continually impressed with this source of card filtering. I used to be in the "card disadvantage=bad card" crowd but thankfully have seen the light of card filtering. In a deck that is constantly trying to balance threats with the right amount and type of interaction, Faithless Looting is an absolute godsend. Sometimes a handful of countermagic is exactly what you want. Other times you need a threat or a burn spell while cursing your inability to draw well. Faithless Looting massively rewards you for knowing both what you do and don't want. I'm never unhappy to see it off the top of the deck. We haven't even got into how good it is, accompanied by Thought Scour, at filling the graveyard with spells to activate Pteramander's evolution or keeping spells flowing for Young Pyromancer! If that doesn't speak to its utility in this deck, I don't know what will.

So, why play this deck over Izzet Phoenix?

It isn't nearly as resilient to removal in game 1, it isn't nearly as randomly explosive, and it uses a TON of the same cards. Beyond simple budgetary reasons (Arclight Phoenix doesn't grow on trees), there are certainly some valid reasons to sleeve up one deck or the other. Despite sharing a lot of cards the decks require very different strategies. Piloting a Delver deck to victory is a lot like threading a needle in a windstorm or bringing a scalpel to a knife fight: it's an exercise in finesse and agility. Shifting from offense to defense at a moment's notice and understanding when to hold up mana and when to tap out are skills you'll be exercising almost every game. The play experience for an Izzet Phoenix victory is more akin to hammering a nail: an imposition of your will against a hopefully helpless object. I also generally find Delver strategies to be more effective against interactive decks, even if Arclight Phoenix itself is a more resilient and explosive threat.

Beyond metagame and playstyle reasons there is currently some hidden equity to be gained by playing a UR deck that looks like Phoenix but is not. I often met with an overabundance of graveyard hate in post-boarded games which, while certainly being a roadblock for us, it isn't near the haymaker that it is against Phoenix. The card most affected by graveyard hate is Pteramander and really only a turn 0 Leyline of the Void or early Rest in Peace prevents a timely Thought Scour or Looting from engaging 5/5 flier mode. The other big sideboarding faux pas I've gained an advantage from is people relying on spell-based hate to shut us down like Phoenix. Just like graveyard hate, it's definitely a roadblock we can work around even without drawing our burn. Not having to play three spells a turn to be maximally threatening is a huge advantage in these situations. Izzet Phoenix is a powerful deck, but underestimate the strength of an early Insectile Aberration backed by interaction and followed up by Blue Tarmogoyf at your own peril. 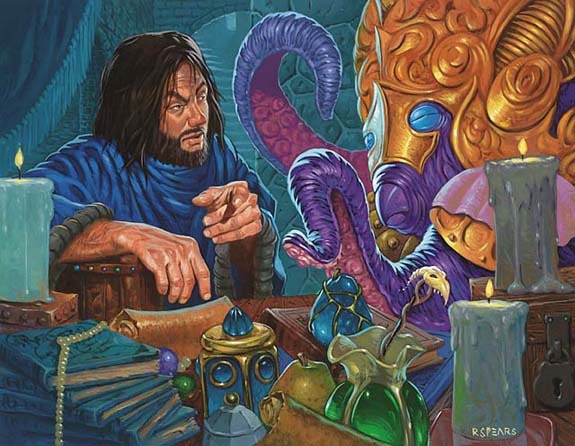 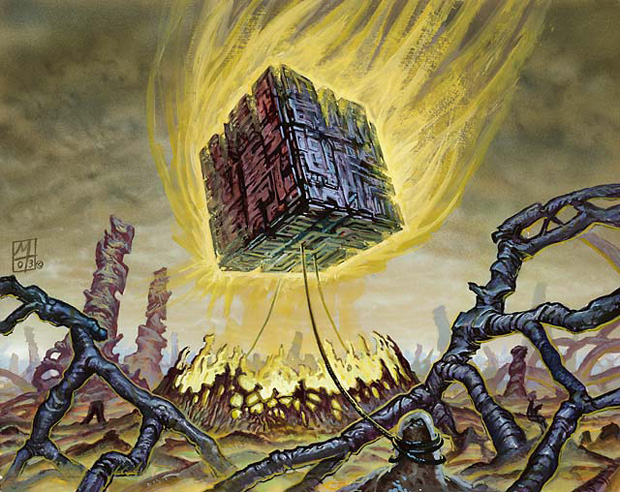 Lord Tupperware takes a look at some of the archetypes in the MTGO Legacy cube, and drops some science you can apply to just about any cube you draft.

Trading Posts
—
The Search For Spice: Pteramander
Share this