Hello you beautiful people! Welcome back to Cardsphere. Today I want to talk about a specific kind of card that I love to play in Commander. They’re found in all kinds of card types, from instants, to creatures, to enchantments, and more. The best part about them? You get to choose what they do. Today, my friends, we’re talking about modal cards.

You’re Ambushed on the Road
So what is a modal card? It’s anything that has you make a choice when it resolves, whether it’s a spell or ability. It usually says “Choose one” on the card and then lists a few options. But some let you choose two or three, or even all modes! Some classic examples are Tooth and Nail and Outpost Siege. And if you’ve been keeping up with the previews for the new Magic set, Adventures in the Forgotten Realms, you’ve been seeing some pretty spectacular modal cards. In fact they’re so good I felt compelled to write this article.

Why do I love modal cards? Because I like having options. They’re like the Golden Corral of Magic cards. As a game of Commander progresses, your needs in the game will change. At certain points you will need removal, and at other times you’ll need protection. And later, you’ll need a way to close out the game. Boros Charm, for example, can potentially fit all three of those needs. The first mode can deal 4 damage to a planeswalker, which will kill or severely weaken most walkers. The second mode gives all of your permanents Indestructible until end of turn. Since board wipes are everywhere in our game, it’s best to be prepared for them. Then the last mode gives a creature Double Strike until end of turn. This absolutely can end games, especially for voltron decks, or if someone is just low on life and you’ve got an unblocked attacker that needs a little extra oomph. You can even target an opponent’s creature that’s attacking someone else to make them do the dirty work. Now I’m not saying you should run Boros Charm in every deck with red and white, but… probably most of them. It’s a fantastic card.

Don’t Tell Me I Don’t Have Options
Where modal cards can be the most beneficial is in situations where you don’t have control of what you get to cast. This happens, for example, at times when you’re playing cards off of the top of your library. When you’re playing a Cascade deck, you don’t have very much control over what you Cascade into. Because of that, it’s almost foolish to run spells in a Cascade deck that are reactionary, like counter spells (Arcane Denial) or protection spells (Heroic Intervention). But if you Cascade into a card that has the option to counter a spell or have a different effect, such as Cryptic Command, then you’re not getting screwed out of the advantage that Cascade provides by getting stuck with a card that you can't play (unless you want to counter your own spell).

Let's look at an example. Say you’re playing Elsha of the Infinite. You have the ability to play the top card of your library if it’s a nonland, noncreature card. But if that top card is a Jeskai Charm, you’ve gained even more advantage because you now have access to what feels like three cards from the top of your library, because that card has three possible effects to suit three different needs.

Adventures in Egg-Sitting
Modal cards are nothing new. We’ve had them since Alpha with Healing Salve, Red Elemental Blast, and Blue Elemental Blast (I still run Red Elemental Blast in most of my non-blue decks with red!) These modal cards were expanded on with charms, like Chaos Charm and Ebony Charm back in the Mirage set. We got our first three-color charms in Planeshift, like Rith’s Charm and Treva’s Charm. Ravnica came along with the ten bi-colored guilds, each of which had its own charm. We’ve even seen modal spells that give your opponents options, with the Will of the Council mechanic on cards like Council’s Judgment and Split Decision, or the Council’s Dilemma mechanic which gave us the much maligned Expropriate.

And let's not forget split cards! With split cards, instead of having to pay one cost and get a choice of effects, you have two cards combined into one, with two different costs. One split card I like to use often is Wear // Tear, which also has the Fuse option that allows you to cast both halves. But the problem with split cards was that they couldn't be permanents, only instants and sorceries.

As the years have gone on and the game has progressed and developed, in order to keep the game feeling new (to sell more cards) the designers of Magic have had to really explore the possibilities in their design space and in how cards function. This led to two recent mechanics that make cards modal because of how they give you different ways to cast them. Those mechanics are Adventure and MDFCs.

Adventures, so far only printed in Throne of Eldraine, are creature cards that also have an instant or sorcery spell with a different cost and effect built into them. So you can cast the instant or sorcery, and then the card goes “on an Adventure” into exile, from where you can later cast the creature spell. My favorite Adventure card, by far, is Beanstalk Giant. Old Beanie, as I like to call it, is a superb addition to any deck that plays permanents off the top of your library, such as Atla Palani, Nest Tender and Vaevictis Asmadi, the Dire. It’s a fantastic card because if you draw it, then you can just cast Fertile Footsteps for three as a ramp spell and not feel bummed about an expensive creature sitting in your hand. But if you flip it off your deck with your commander’s, or another card’s, ability, then you get a massive creature dumped on the board. Win win.

MDFCs, or modal double-faced cards, have modal right in the name. These were first introduced in Zendikar Rising, and are cards that have two sides that can be played from either side. We’ve had flip cards before, but until MDFCs the flip cards had to be played as the front side first and then flipped later. On the surface(s) they feel like split cards since you have two different options on each card, but they solve the split card problem by allowing one or both sides to be permanents. In Zendikar Rising the backside of the MDFCs was always a land, and the frontside was either a spell or a land that provided a different mana color from the back. We saw the MDFCs progress through Kaldheim and Strixhaven, getting more card types available for the front and back. My current favorite MDFC is one that I run in my Imoti, Celebrant of Bounty Cascade deck. It’s Augmenter Pugilist // Echoing Equation. The creature side gives me a potential 8/8 with trample, which is easy to Cascade into at 3 MV. But the Echoing Equation side is why I truly love this card. It makes all of your creatures copies of a creature you control. You can even choose a legend! Just imagine a whole board full of Artisan of Kozileks that can swing, each triggering the Annihilator ability, and you can get the picture of why I love this card.

The modal cards in Adventures in the Forgotten Realms are taking us back to the beginning. Like the first modal cards, You Come to a River and Plundering Barbarian, as well as most of the other modal cards in this set, only give you two options (note that this article was written before previews were completed). Except now the options have a name, which has no effect on the card except to give it that D&D flavor. They’re all fantastic, and I’m very excited to start including them in my budget Commander decks and my pauper cube.

Not convinced? Still on the fence about modal cards? I get it. The modal cards tend to cost more than what you’d pay for just one of the effects. So yes, you may be sacrificing some efficiency. But what you're getting in card advantage will pay for that extra cost.

Let me tell you about a time I was playing with my local playgroup. My friend was sitting pretty at a high life total, 36 I believe. He cast Storm Herd, giving himself 36 1/1 flyers. He grinned, seeing the lack of flying defenders on the battlefield. One by one he could mow us down with flying horses, he just needed to untap with them. But then it came to my turn. I cast Rakdos Charm, using his own creatures to kill him.

Alright friends, that’s all I’ve got for you today. Check back in a couple weeks so we can talk more about Adventures in the Forgotten Realms. Don’t forget to catch me streaming with Scrap Trawlers Sunday nights at 7:30 Central, or come find us on YouTube. You can also hit me up on Twitter at @AndyZupke. Until next time, may you always make the best choices. And play lots of games! 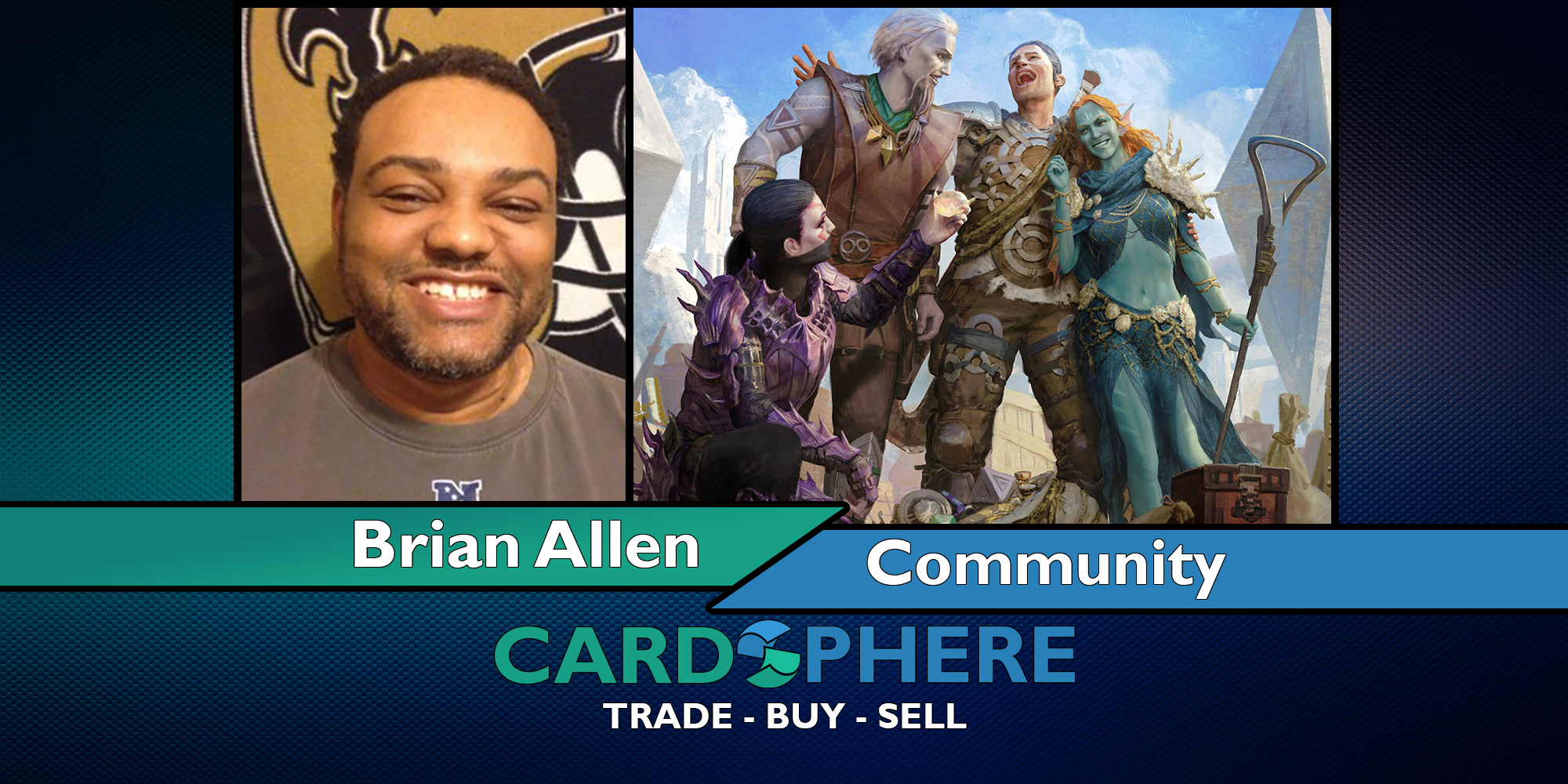 Brian Allen talks about the history and the return of The Hunter Burton Memorial Open.

This week we brought on the amazing Twitch streamer MTGNerdgGirl! NerdGirl is best known for streaming Magic but is also an accomplished Limited Magic player as well. We discuss a lot about her career in streaming and magic and much more. Please help me in welcoming NerdGirl to the show!