A few weeks ago, I wrote an article about what I believe to be the top 8 charactersitics of a great Limited format. Now that I’ve had the chance to draft Guilds of Ravnica over 100 times, I think it ticks all the boxes. There are blisteringly fast aggressive decks, powerful control decks, graveyard interaction, and ways to mitigate flood and screw. And of course, there is a ton of mana fixing. A dual land in every pack plus the myriad other ways to add flexibility to your mana base makes for a lot of options.

When I hear people say that they think there aren't a lot of decision to be made drafting GRN once you know what guild you're in, I couldn't disagree more. Not only do I think each guild offers multiple kinds of decks, I believe there is a "sixth guild" that's being widely ignored: The Gate Deck. And that’s what we’re going to explore today.

On Ravnica, We Do 5 Colors Differently

Most limited formats offer a 3-5 color “good stuff” deck. The recipe is usually the same: bombs, removal, mana fixing, card advantage, and mana sinks. When you draft mana fixing, you are more open to take the most powerful card out of each pack because you are not pigeonholed by a two-color combination. We’ve all had that feeling of opening pack 3 and seeing an off-color bomb and being resigned to take a filler common that your deck can actually cast. A drafter with a flexible mana base doesn’t have that problem because nothing is off-color for them. In recent sets, Gift of Paradise, Oasis Ritualist, Sailor of Means, and Skittering Surveyor all helped enable 3-5 color decks that by and large stuck to the aforementioned recipe. In GRN, the recipe is a little different, thanks to one main ingredient: 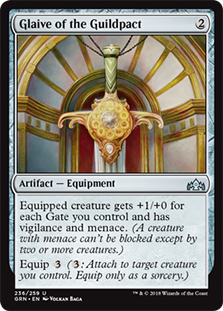 That’s right. The card I’m looking for most of all in my four and five color limited decks is not some rare or mythic, but an uncommon piece of equipment. Glaive of the Guildpact is your reward for picking up a bunch of gates and turns any creature on the battlefield into a must-kill threat. If you haven't played with this card yet, you might make the mistake that I did upon first evaluating it which is to think that it looks too slow and clunky. But trust me: the boost of power, vigilance and menace is a potent combination. This skews the multicolor decks in GRN toward being very creature heavy, much more so than versions of this deck we’ve seen in previous sets.

While Glaive is the card I’m looking to exploit the most with this deck, there are other strong cards that care about Gates. Gatekeeper Gargoyle as a 5/5 or larger flyer makes for a finisher that can end the game in a hurry. Guild Summit is probably the most obvious of the bunch since it’s a source of card advantage. While I’m happy to end up with a copy of this card, I don’t find it to be a priority as there are many other effects in this format you have access to if you’re looking to draw cards. And while it doesn’t care about gates specifically Chamber Sentry is a card that justifies stretching your mana base. This card should be first picked out of most boosters, but until people start evaluating it correctly it will continue to get passed later than it should. If you can recur this card from your graveyard, this can be the inevitability your deck wants.

Now that we’ve looked at the cards that care specifically about gates, let’s explore the other components of this deck. 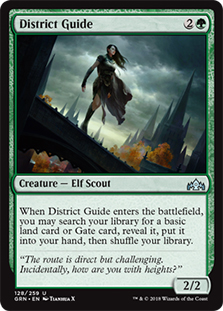 As with any 3-5 color deck, you still want to be two colors at your core. I have found that in GRN the Gate Deck is usually base Golgari or Selesneya. Green offers you additional fixing in the form of District Guide, Urban Utopia, and Circuitous Route (listed here from best to worst). It also offers a lot of the best two-for-one creatures, which pair very well with Glaive: Generous Stray, Affectionate Indrik, and Kraul Foragers. So it would makes sense that the two guilds that contain green would be the best homes for a five color shell. Gates in your main two colors as well as off-guild gates (like a dimir gate in a golgari deck) are strong pick-ups and you’ll want 1-2 copies of Gateway Plaza for maximum flexibility. I usually want no more than half my lands to come into play tapped, so I max out at 9 gates in these decks. Building complex mana bases is difficult and takes some getting used to, but the more you do it the better you will get. 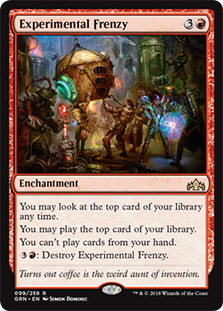 You don’t need me to tell you that bombs win games of limited and that you should be picking them highly. Experimental Frenzy and Dawn of Hope are two very powerful card advantage engines, not to mention that 1/1 tokens with lifelink wear Glaive quite well. Vraska, Golgari Queen and Ral, Izzet Viceroy are both powerful Planeswalkers. Thief of Sanity, Midnight Reaper, and Trostani Discordant are cards that I would like to make my deck a high percentage of the time and might incline me to skew towards a deck with a flexible mana base to ensure that I can cast them. 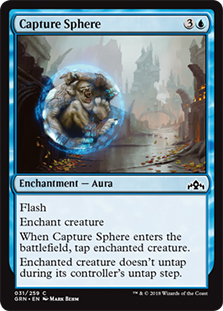 There's a lot of splashable removal to be found in this format. If you’re base green, you won’t have many choices there (Prey Upon is not a card I’m very happy to play) but white has Luminous Bonds and Conclave Tribunal, and black has Dead Weight, Deadly Visit, Price of Fame, and Necrotic Wound if your creature count is high enough (more on this later). You can dip into blue or red for Command the Storm, Artful Takedown, and Capture Sphere. Sphere is probably the best for the Gate Deck because not only is it easily splashed, but these usually go so late since both blue guilds will take most other removal over it. Anywhere from 4-6 removal spells I think is the sweet spot for this deck. 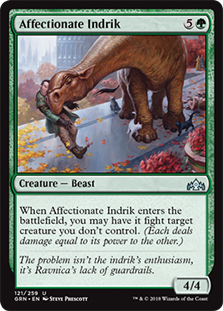 A high creature count is really necessary for this deck, somewhere in the 14-16 range, to truly to take advantage of the power of Glaive of the Guildpact. Because your goal is to suit up a creature with this powerful equipment, the creature’s size doesn’t particularly matter. This means you’re looking for creatures that do something when they enter the battlefield. Affectionate Indrik, Generous Stray, Burglar Rats, Plaguecrafter, Centaur Peacemaker, Sumala Woodshaper, and Kraul Foragers are all solid roleplayers in this deck. Making your opponent discard a card, drawing a card yourself, or just gaining some life can be the incidental value you need to help propel you into the late game. 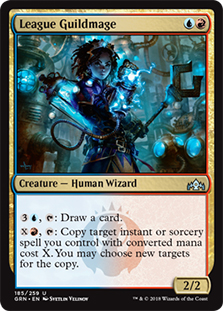 With The Gate Deck, the early part of the game will be about setting up your defenses and your mana with the goal of taking over in the mid-to-late game. Mana sinks are an excellent way to do that. Dawn of Hope being chief among these although there are a number of offerings at uncommon. The Guildmages provide a wide variety of abilities of which you can take advantage, depending on the game state at any time. I actively want League Guildmage, Conclave Guildmage, and Swarm Guildmage in my Gate Decks for card advantage, creature generation, and life gain, respectively. Ledev Champion is also a fantastic place to put your mana especially if you can get to double activation late in the game. Again, those 1/1 lifelinkers are great with Glaive of the Guildpact.

This is probably a good place to mention that incidental lifegain is fairly important here. It’s always a strong component of any multicolor goodstuff deck since you are often coming back from behind in most matchups. It’s especially important in this format since there’s so much damage that goes directly to the face: Direct Current, Sonic Assault, and Inescapable Blaze.

Card advantage is another key piece of the puzzle in this deck, not only because it gets you ahead on resources but because it allows you to dig for the different pieces that your deck needs to succeed. Mana sinks can certainly provide card advantage by creating multiple effects from one card. If your deck is base Golgari then I would look at recursion as a form of card advantage with cards like Golgari Findbroker, Vivid Revival, and possibly even Gruesome Menagerie. Pure card draw is also quite potent here and I’d like to have incremental ways to draw cards in the form of Generous Stray, Urban Utopia, or Portcullis Vine or splash for a Chemister’s Insight or a Notion Rain.

One of the trickiest parts about drafting this deck is that because you are building such a flexible mana base, you are open to drafting any multicolor cards that you deem to be powerful. The trap here is thinking that cards that are power houses in a specific guild will translate to being powerful in The Gate Deck. Beacon Bolt, Disinformation Campaign, and Boros Challenger are all cards that I would be thrilled to first pick if I was in their respective guilds, but they just won’t shine in The Gate Deck. Similarly, there are a number of cards that are better suited here than in their normal guilds. Centaur Peacemaker is hardly what an aggressive Selesneya deck wants, but a 3/3 body that buys The Gate Deck some time to get to the late game is just perfect. Swathcutter Giant is too expensive for a beatdown Boros deck, but can be a nice stabilizing finisher for your 3-5 color deck. It is very important to think about how cards fit in to a deck’s game plan and evaluate them accordingly.

When to Check in to the Gateway Plaza Hotel 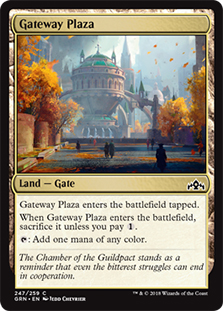 I don’t believe that sitting down and planning to draft this deck is correct. I would rather have a strong version of one of the five guilds instead. But if I start off with some powerful bombs that don’t necessarily go in the same guild, or if I feel I’m being pushed off my first one or two attempts at a guild (especially if I see a Glaive pick 4-8), I think this is a fantastic escape route. And it’s very flexible. Because your hallmark cards, Glaive and Gargoyle, are not only colorless but uncommon, you are likely to see these payoffs if the deck is open. I've even seen versions of this deck that aren't green but rather use Glaive in combination with Healer's Hawk or Garrison Sergeant in a Jeskai shell. No matter how you make it there, when a room opens up at the Gateway Plaza Hotel, I would recommend checking in and staying for a long time!

Here a couple examples of some strong versions of The Gate Deck: 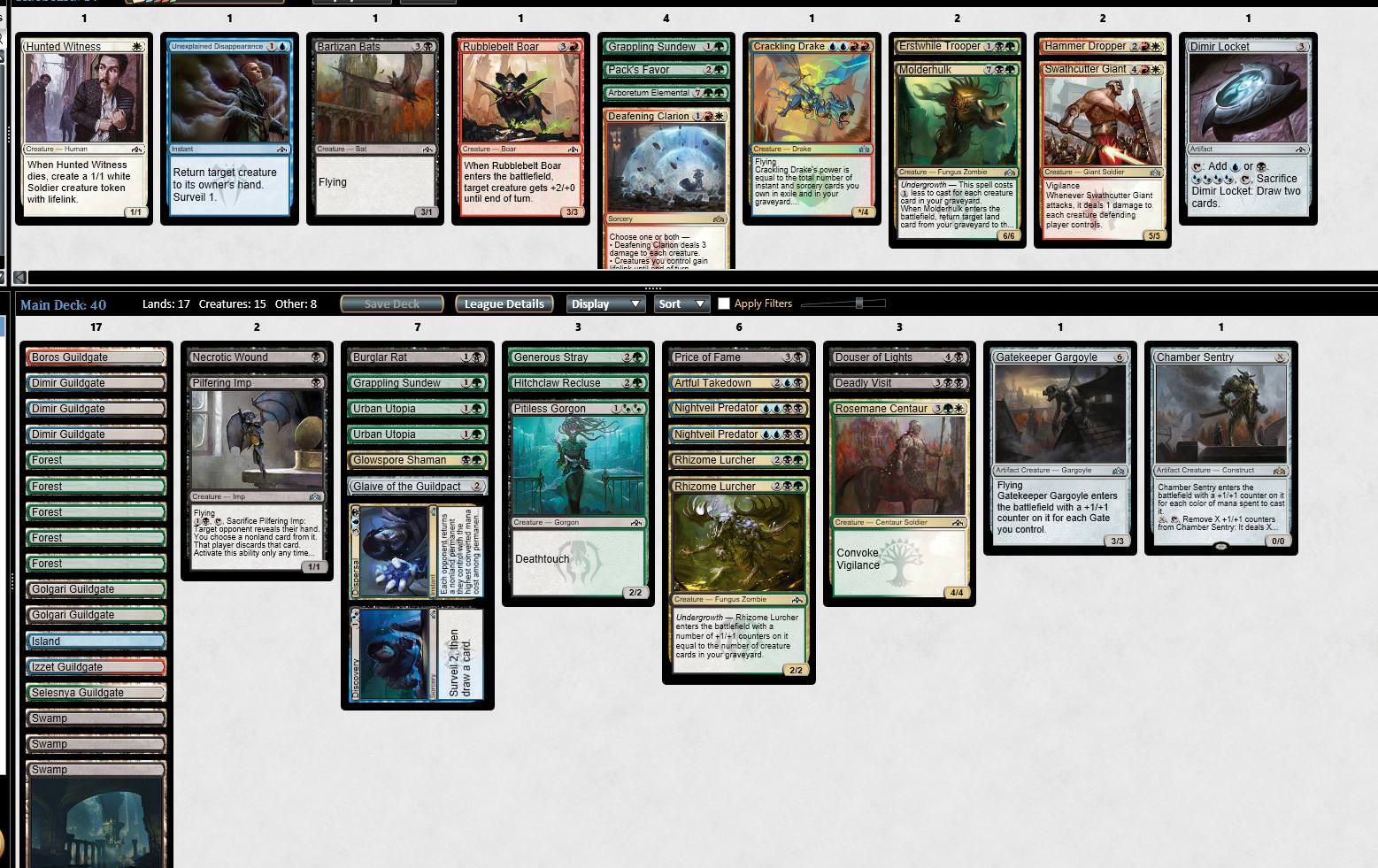 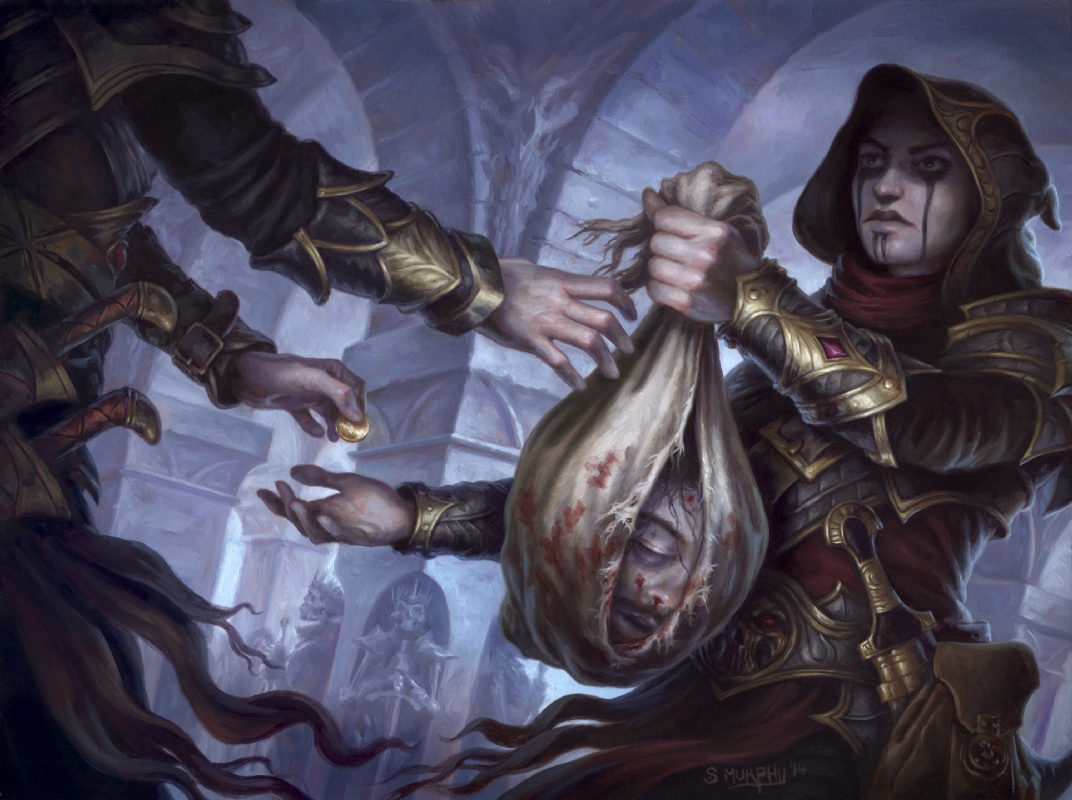 As of today, we have a Masters set with the highest MSRP, craziest reprints, and its own special sort of promo. With all these changes, how can we know if Ultimate Masters is worth it? Markus Leben is here to set the record straight. 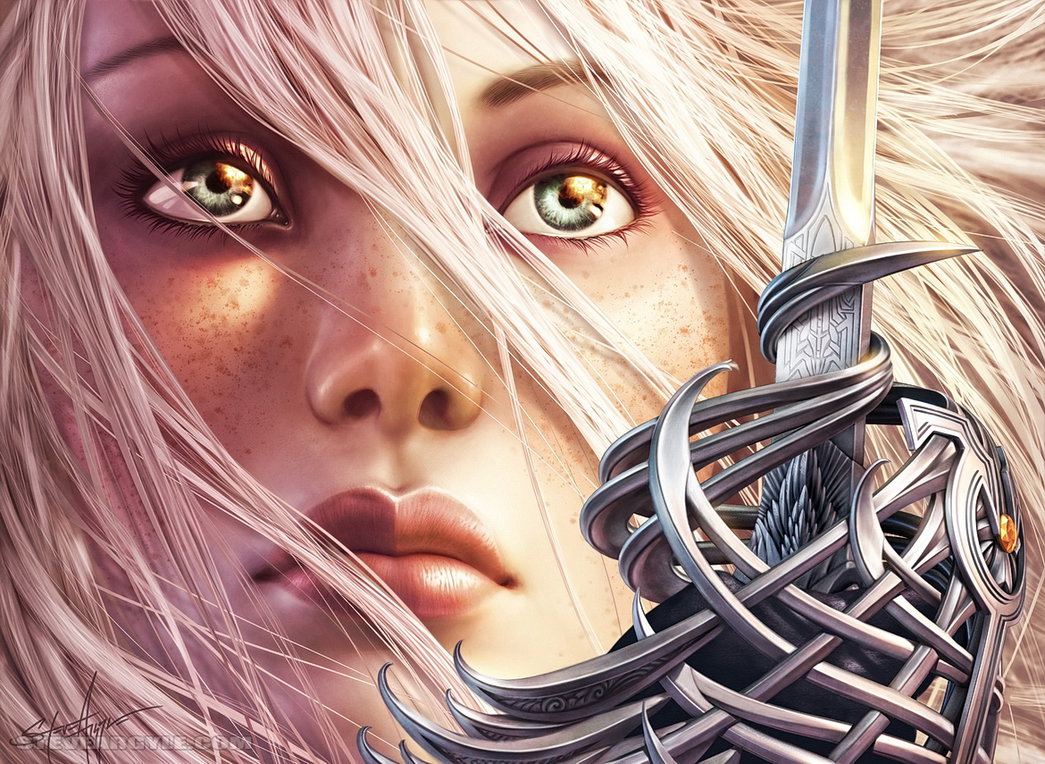 The Eternalist breaks down those dreadful certainties: Death and Taxes.

Trading Posts
—
The Perks of Staying at the Gateway Plaza Hotel: How to Draft The Gate Deck in GRN
Share this