Imagine for a second that you're a car designer.

You look up from your yellow legal pad or your CAD program (or whatever it is that car designers use to sketch ideas... I SAID PRETEND, OKAY?), sweat pouring off of your brow. You've been working for years on this crazy idea, and in one sweet moment of exertion, you finally got thought A to connect with thought Z. You've done it. You've invented the most important thing that's ever happened to the auto industry. You've created an innovation that can move a car one hundred miles on a single gallon of gas. You're going to save the world billions of dollars. You've single-handedly lowered combustion emissions on the planet. And you're about to be really, really, REALLY rich.

While you're trying to decide which agent you're going to hire for your publicity tour and where you're going to take your significant other for dinner that night to celebrate, your boss comes in to your office. But as you excitedly show her your idea, her face sinks. You ask what's wrong.

"Well, this doesn't seem like it's going to be compatible with the Model T that my neighbor restored. It'll work on every other car in the market, but not my neighbor's project. So it just wouldn't be fair. We can't build it."

Sounds crazy, right? Why would anyone want to limit innovation and benefit in order to cater to a very small percentage of the market that is already understood to work differently than the rest of the world? There are a significant number of people arguing for precisely that because of Lurrus of the Dream-Den.  On Monday May 18th, WotC is expected to announce that the scary kitty is going to get a ban in Vintage and Legacy. I'm proud to pat myself on the back and say that I got Lurrus right in my prediction article, where I said that I thought Lurrus would be decent but not backbreaking in Standard.

However, Legacy and Vintage have been taken over by the ability to reuse cheap and free spells every turn with Lurrus, and several Modern decks have augured Lurrus into them to do the same. Pioneer has been effected the same way but to a lesser extent, while in Standard Lurrus has been a decent inclusion in a couple of strong decks but nothing that has warped the format.

This truth has caused a big discussion in the MTG community: should Lurrus have made it past the design team? Should the card (and Companions to a lesser extent, which I'm not going to cover in this particular column because that's another column) have ever been made? And should WotC take Eternal formats into account when printing new cards? It's that last question which interests me the most--partially because I'm primarily a Standard and Limited player and that's what I usually write about, and partially because it's the metatopic that overshadows the other questions. We have to answer that one first because that answer will influence the other problems and their solutions.

And the answer is no. No, Wizards should not have taken Vintage and Legacy into account when printing Lurrus, and no, I don't think they should change the way they design cards to take them into account. There are several reasons for this, both practical and theoretical, but added together they provide a way to see the inevitable announcement on Monday as a good thing and not as an admission of failure.

First, I want WotC to take chances and make amazing and flavorful cards. Everything about Companions fits a card that plays a huge part of the Ikoria lore. If part of Ikoria is having some sort of a creature bond with a human and becoming their tag-team partner, then Companions fit it perfectly. And just as in real life, creating a partnership means that you have to give something up for the sake of the partner. On the surface, it seemed perfect. Now I'm the sort of player that adores the mechanic because of this flavor and doesn't have to determine whether it's actually, you know, broken. But in the sense of placing you inside of a different plane, it's a great idea and the sort of thing that makes an alternative of "lol here's more zombies it's a zombie world" sound really boring.

Second, I'm not that upset if these risks affect Eternal formats. Mark Rosewater eluded to the difficulty of this in his recent Twitter conversation with the MTG community about the new set. Think about Magic formats as a series of concentric circles, with Standard in the center, surrounded by Historic, then surrounded by Pioneer, and so forth. As the circles get farther away, it is fair to expect more and more problems with newer cards. New sets are designed for Standard, less so Pioneer, and even less so formats like Vintage and Legacy. And, by the way, Lurrus itself is not the problem.

There's a reason why Lurrus is a good-but-not-dominant card in Standard. Lurrus' power depends almost entirely on the cards that you can get back from the graveyard with it. And it turns out that the formats that exist in order for its players to play broken cards has an issue when you get to play those broken cards out of the graveyard every turn. Again, I had a feeling that Lurrus would be problematic in older formats, but I didn't recall that the issues might be a result of cards like Lion's Eye Diamond. I know that the people who play these older formats don't want to hear this, but they make up a very small minority of MTG players. It's impractical for there to be a play-design team that not only covers every interaction in every set currently in Standard and possibly even sets that haven't been released yet, but also the nuances of the older sets.

In addition... what exactly has been lost here? I would never claim that the cancellations due to COVID could be a blessing (and trust me, as someone with a daughter who's been home for nine straight weeks with no end in sight I wouldn't), but because of the current public policies there have been exactly zero paper tournaments in months. Might I also remind you that, as of the writing of this article, Ikoria has STILL not been officially released in paper? There was a stay-at-home prerelease that I imagine few people were able and willing to access, and the official release is Friday the 15th. So, with all the cries and screams of anger about Lurrus in Eternal formats, we've been affected by it for a month's worth of Magic Online results. And because of the change of schedule in B&R announcements as well as the data obtained from that month, we're going to get a format change that will probably ban Lurrus or restrict the Companion mechanic in some way. I know that The Internet Knows All, but is it possible that a lot of the screaming is being amplified by everyone being stuck in their houses in front of their computers, and this process might have taken longer if not for COVID?

A month of Lurrus being overly-strong in smaller formats is not a disaster. And it's a side effect that the Magic community should be more than willing to accept because the alternatives are worse. Who wants to play an underpowered Ixalan-level Standard for any period of time? There's no sort of banning or restriction that can make weak cards interesting. Similarly, I would hate to see every Standard set become a sort of Standard Masters set where the cards in it aren't allowed to be played in Eternal formats. If I wanted to do that, I'd buy Game Night and leave it at that.  I don't think this can be prevented because of the nature of the aforementioned concentric circles. There are going to be times when Standard sets affect Eternal formats in unforeseen ways. Magic is able to prevent the inverse with sets like Eternal Masters and Modern Masters, and this feels like a good system that doesn't need radical changing.

Finally, I've heard some take this as an indictment of the Play Design team at WotC because of the run of incredibly powerful cards that have warped formats in the past year. While it's true that we've been on a run that went from Oko, Thief of Crowns to Veil of Summer to Once Upon a Time to Lurrus, many of those other cards are a different magnitude of error than Lurrus. Veil and OuaT were hugely overpowered cards that were the best in class in literally every format they were tried. They pushed hundreds of alternative cards out of the format and became must-plays until their banning. And Oko is a step even beyond this, because it not only warped other formats but it warped Standard. The "error" of Lurrus (if there is one) pales in comparison to the Play Design team not considering what Oko's minus ability could do if used on the opponent's permanents.

We always need to remember that there are real life humans on the other end. On the other end of every card design, on the other end of your Arena and MTGO game, and yes, even on the other end of Twitter. These humans have created a system where when mistakes happen they can be caught and corrected, and Lurrus might be a mistake in some eternal formats. But I as a player want to see the next Lurrus. I want to see the next mechanic like Companion. Cycling is a great mechanic, but it doesn't make me want to pound out a couple thousand words for a column. Lurrus has. Twice. And that excitement and interest is a net positive for the Magic community, even when the Nightmare Cat is a little too strong for its claws. Stay heathy and safe, and as always... drive friendly! 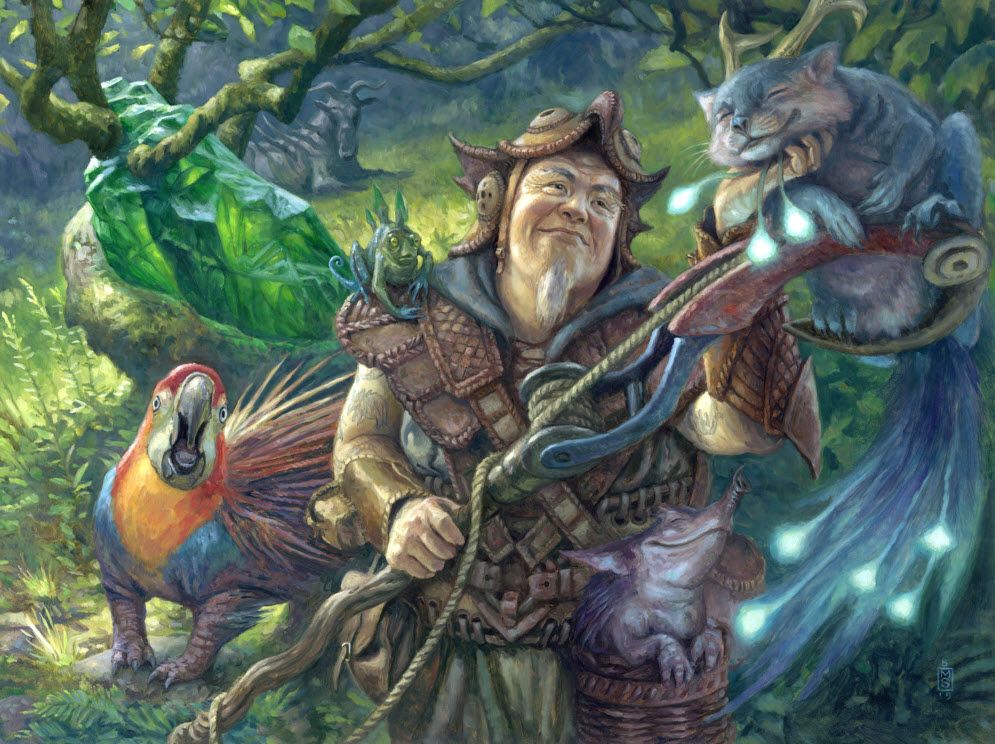 Lord Tupperware discusses how the subtlety of Ikoria's draft environment can be used to your advantage if you know how to invest in the right picks at the right time.

Lord Tupperware's had enough BREAD and has started focusing instead on his ABs. With a format this synergistic, you need to know how you can do so also.

Trading Posts
—
The Lurrus Problem Isn't A Problem: The Effect of Standard Cards on Eternal Formats
Share this