When it comes to a new set and the sweetest cards, the question has always been timing. You're going to get this card, but when do you want to get it so that you get the best price?

The collector market and the Commander market have combined with an unexpected dose of ‘I have to have this nowWWW’ and created an environment where the most chase versions of a card don’t have a lot of copies in circulation. The first set that demonstrated Wizards’ willingness to really goose the rarity of certain cards was Commander Legends, which had one extended-art slot that had only a 30% chance to go foil, making foil extended art mythics show up about every 400 packs.

Behold what that did to the price of Jeweled Lotus:

Do you remember the frenzy? The disbelief? The questions of ‘how high can FEA Lotus go??’

I freely admit, I didn’t think it would be this expensive. I overlooked how collectors have really come out to play with Magic cards. Jeweled Lotus is +3 mana, better than Dark Ritual and Sol Ring, but used in an extremely narrow sense. Even now, it’s only in 15k decks on EDHREC, behind Hullbreacher and Jeska’s Will, and only about 1500 users ahead of the dual lands from that same set. It’s got the potential to be very good in the right deck, but it’s not a staple.

The set after that was Kaldheim, and my goodness, did Wizards do their best to give us another chase card in the vein of Jeweled Lotus, something everyone would want, to get collectors and players interested: Vorinclex, Monstrous Raider.

That price graph, though, is not the same as Jeweled Lotus. It’s a more traditional graph, where the preorder price is a touch low, the immediate interest spikes the price HARD, and then lowered demand gently decreases price over time. Granted, it wouldn’t take much to spike the Phyrexian foil version, as there’s less than 100 of those available on TCG.

So if the price was at its cheapest in the first couple of weeks, I started thinking that this could be the new normal, that the rarity and demand for a card would override the usual pattern of ‘expensive right away, better to buy later’ that’s been in place for a long long time when it comes to Magic finance. After all, we’d never seen Wizards sell products that were a 1/400 ( FEA Jeweled Lotus) or 1/300 (foil Phyrexian Vorinclex) to come from a $25 booster pack.

Then Time Spiral Remastered came along, with each pack having a 1/27 chance of having an Old Border foil, times a 1/121 chance of getting a card, and presto, that’s one pack in every 3,267 having an Old Border Foil Thoughtseize. Granted, these were regular packs and not the Collector Boosters, but that’s still a rare thing to have show up.

The graph looks amazingly normal for OBF Thoughtseize, an early jump then the price calms down:

I have to admit, this is not the price graph that Jeweled Lotus primed me for. There was a frenzy with the Old Border foils, but a lot of those have calmed down, with a graph that generally looks like the one for Thoughtseize (which, I have to say, if you think paper play comes roaring back, the nonfoil old border is something you want to get now while it’s cheap) or other cards that aren’t the Lotus.

For a frame of reference, let’s look at the most expensive card in Zendikar Rising: Expedition Foil Cavern of Souls:

Yup, big price early, trickled down, even had a bump in there but settled back down, a touch higher than it was but still worth paying attention to. Given this evidence, let’s talk about the most recent example of this: the traditional foil of the Japanese alternate-art Demonic Tutor.

We can see that we’ve passed a big spike and the price has been steady for a couple of weeks. Do I think it’s going to hold steady at close to $500? I’m inclined to say yes, especially because all the attention and action is going towards Modern Horizons 2. That set offers not just the new designs, but OBF reprints of Modern Horizons 1 cards and the reprints of existing cards into the Modern format.

Those two groups are all going to see big spikes as cards are announced, but then settle down as people buy up all of the things that they want. People’s pet decks will get new toys, old favorites show up in a new frame, and we get to see the prices go nuts. I would expect lots of things to follow the known pattern, as we’ve got loads of history indicating that’s what’ll happen.

For instance, we’re getting another cycle of no-mana-cost, suspend-only spells, and that’s going to cause another bump in cards like As Foretold, Electrodominance, and Finale of Promise:

I’m not sure why As Foretold started the bump a couple of weeks ago, though it’s made occasional waves in Modern as people try to exploit cards like Restore Balance and Living End, these are the main ways that folks try to evade the lack of mana costs. We’ll see if it’s worth the effort.

So to summarize, I think that the ‘buy early before it gets expensive’ mindset doesn’t apply to things other than Jeweled Lotus. That card was the exception, not the rule. Other expensive cards in new sets are not following that same pattern, thankfully, so if you see a new and expensive card, you can feel free to be patient with it. You’ll have your chance at it for a more reasonable price if you wait. 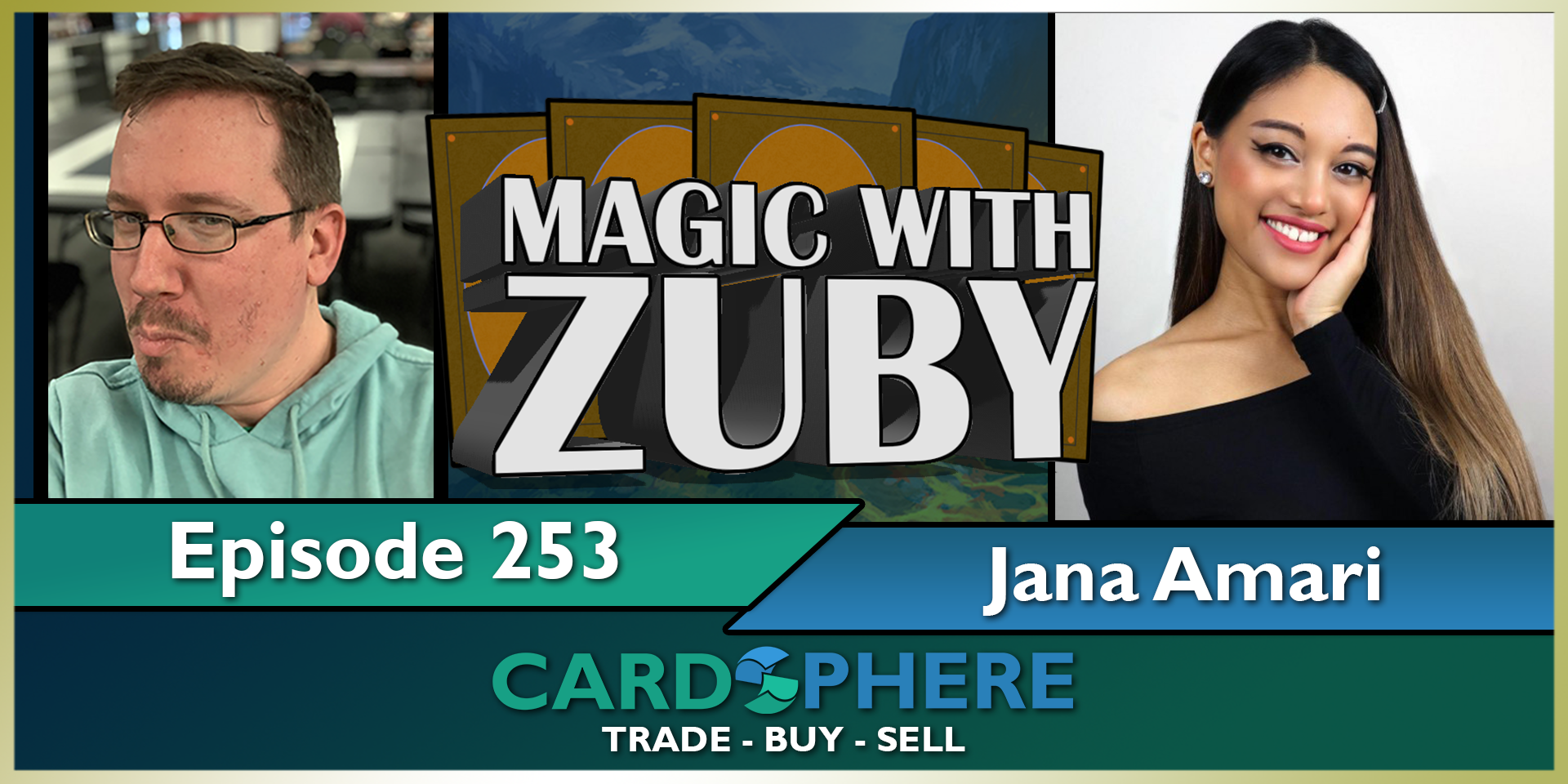 This week we brought on the wonderful Jana Amari! Jana Amari is a Magic the Gathering cosplayers, twitch streamer, and youtuber. Please help me in welcoming Jana to the show!

This week we welcome back Cardsphere power user Barry Ksido along with Aaron David Dafzyo. Both of the guest join Lynch and Joseph the co-hosts of I Hate Your Deck, to go head to head in this multiplayer game!