There’s too many of them. This mission was a mistake, I know now. I was foolish. Already my companions have fallen, but there are still dozens more of those things. Hissing and hungry. Licking their fangs, already covered in the blood of my brethren. They want to drink from me, bite my flesh like animals. And so they shall. But not until I’ve spent every ounce of my will.

They’re closing in. I have but one moment. And so I kneel. “Ancestors, hear my plea. Help me rid the world of this unholy parasite. For the sake of our kin.”

Then all goes quiet. My eyes are closed, but I sense a sudden brightness through my eyelids. I open them, and gaze upon an armored maiden, beautiful, but pale. She reaches a shimmering hand to my chin.

“Arise, slayer. You are not alone.” She raises her ghostly sword and lets out an echoing cry that fills the blood-spattered hall, and for once, for a moment, those blood-suckers know fear.”

Dearly departed, welcome to another Commander article here on Cardsphere. Previews for Innistrad: Crimson Vow have already finished, and the set is looking like more fun than a wedding at a blood bank. We’re going to start our dive into the new cards with a deck tech for a commander that caught my eye for a reason that, I think, might actually be a mistake. That commander is Dorothea, Vengeful Victim.

Dorothea is a white and blue 4/4 flying spirit for just two mana. When you attack with her, you have to sacrifice her at the end of combat. She has a Disturb cost of 3, and you cast her for that cost from the graveyard. She then becomes Dorothea’s Retribution, an aura enchanting a creature. When that creature attacks, you make a 4/4 flying spirit token that’s tapped and attacking that you have to sacrifice at the end of combat. So basically the aura makes another Dorothea every time the enchanted creature attacks.

So where’s the mistake? Well, my phantasmal friends, Dorothea’s Retribution, the enchantment side of our commander, isn’t legendary. That means that we can have multiple copies of it on the board. When I saw this, my brain immediately lit up, thinking of ways I could copy it. Because what’s better than a 4/4 flyer attacking every turn? Several of them.

Let’s look at the ways we’re going to copy Dorothea’s Retribution. Copy Enchantment, Estrid’s Invocation, and Mirrormade are pretty straightforward, coming in as copies of Retribution. Estrid’s Invocation has the added benefit of being able to flicker itself and become a copy of another enchantment if we wish (more on this later.) There’s also Lithoform Engine, which can copy the Retribution as we cast it, or copy the attacking triggered ability to give us an extra spirit. And Replication Technique can give us two copies if we’re willing to share the wealth a little bit with its Demonstrate ability.

Sadly that’s all we’ve got for ways to copy the enchantment, so this deck’s going to need a bit more to make it viable. If our goal is to win by swinging in with all the spirits, then let’s add some cards to embellish that a bit. We’ll start with Anointed Procession to double the tokens we make. Favorable Winds, Supreme Phantom, Patrician Geist, Drogskol Captain, and Battleground Geist all beef up our creatures, while Archetype of Imagination makes them all nearly unblockable. We’ll have Nebelgast Herald tap down a creature whenever we make a spirit. And if we’re looking to make one of our new spirits something a little more saucy, we can cast Mystic Reflection before it enters.

Since we’re going to be making copies of Dorothea’s Retribution, let’s lean into that and throw in some Constellation and similar effects. Whitewater Naiads makes a creature unblockable whenever we have an enchantment enter. Ajani’s Chosen will make some cats, and Archon of Sun’s Grace gives us some pegasi to add to our flying armada. Protean Thaumaturge can become whatever the best creature on the board happens to be. And Sigil of the Empty Throne creates an angel when we cast an enchantment spell.

We’ll need more enchantments to make this worth it. Invocation of Saint Traft acts like an additional copy of our commander. Court of Grace throws in the Monarchy mechanic and makes us more flyers. Psychic Possession is a really cool addition here, because we can use our enchantment copy effects on it for even more card draw. Betrayal is great for throwing on an opponent’s mana dork or utility creature. Ephara, God of the Polis and Thorough Investigation give us some extra cards. And for ramp we’ve got Smothering Tithe and Monologue Tax. We’ve even got Hall of Heliod’s Generosity for getting our enchantments back, which works great with Promise of Bunrei to give us even more spirits. And to top it all off, Enchanted Evening makes everything an enchantment. So all the spirit tokens we make will trigger our Constellation effects. Just be careful not to have Enchanted Evening and Ajani's Chosen or Archon of Sun's Grace on the field at the same time, because you'll have an infinite loop which will end the game in a draw.

Not Long for This World

Since our tokens are destined to die, let’s try to get some benefit from that. Twilight Drover will get a +1/+1 counter whenever our spirit tokens die, then can use those counters to make more spirits. Murder of Crows gives us a looting effect when our creatures die. And we can sacrifice the spirits after combat damage to Altar of Dementia to Mill our opponents, or to Relic Vial for some extra card draw. Selfless Spirit can be sacrificed to protect our army. And Sun Titan can step in to bring some of our stuff back. Even our commander if she's in the yard!

Here’s the full deck list and a link to Archidekt so you can try it out:

This commander caught my eye because of the ability to copy its enchantment side without breaking the legendary rule. And what we ended up with is a fun, low-powered, swingy deck for those of you looking to fight your way to a win. Combat decks are a lot of fun, and can really be a nice escape from decks looking to combo out and take 20 minute turns. Nothing against those decks, I have several myself. But sometimes you just wanna sit around the kitchen table having drinks with friends and turn some creatures sideways. Dorothea is perfect for that experience.

So what do you think of this Dorothea deck? I know there were a few other cards revealed in Crimson Vow after I brewed this that would be good in the deck as well. So which of those would you add? Hit me up on Twitter at @AndyZupke to let me know. You can also catch me streaming budget Commander Sundays at 7:30PM Central at twitch.tv/scraptrawlers. Check back in two weeks for more on Crimson Vow. Until then, take care. And play lots of games! 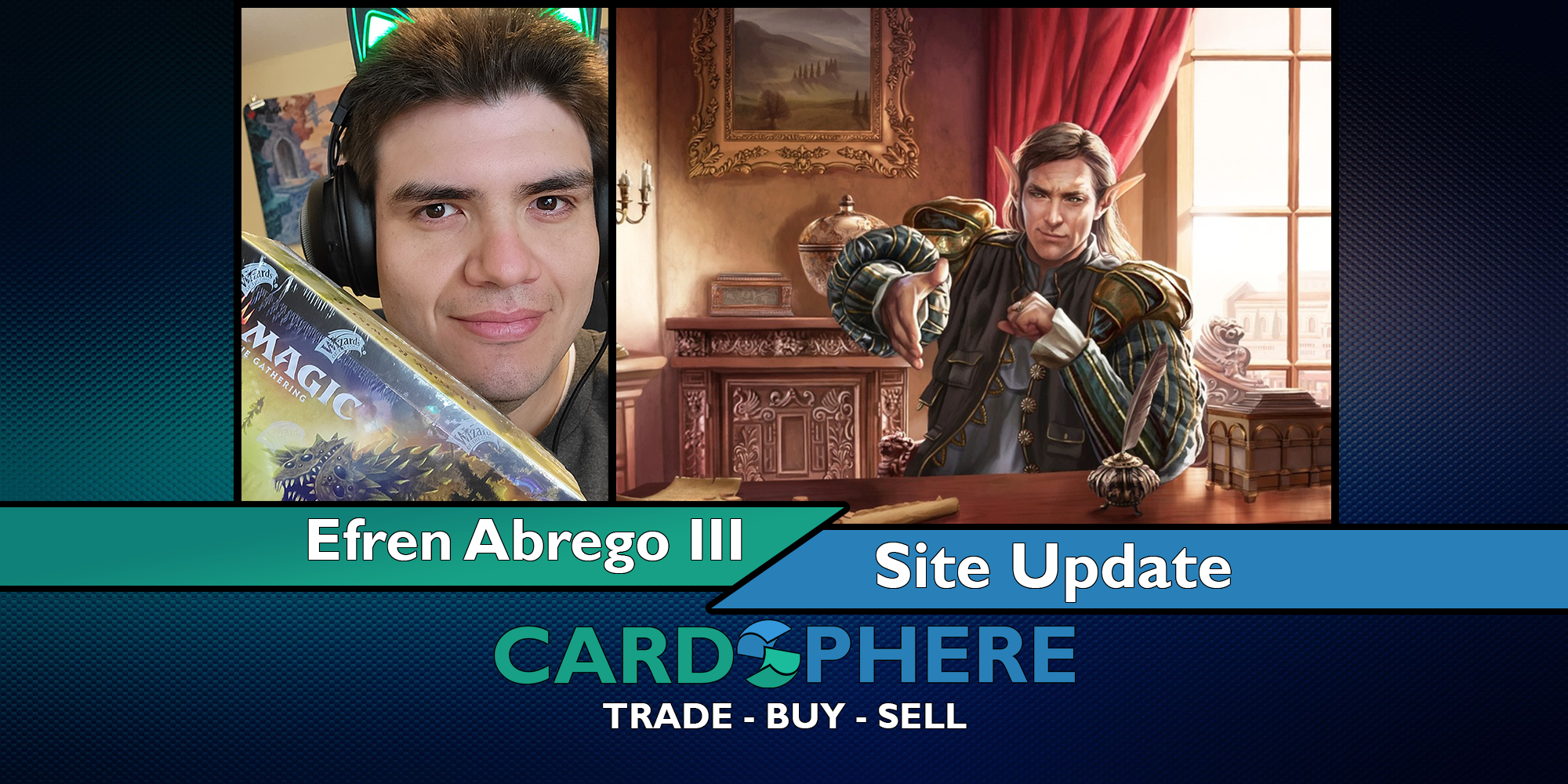 Please read this important announcement about a change to our trade fees beginning December 1st, 2021. 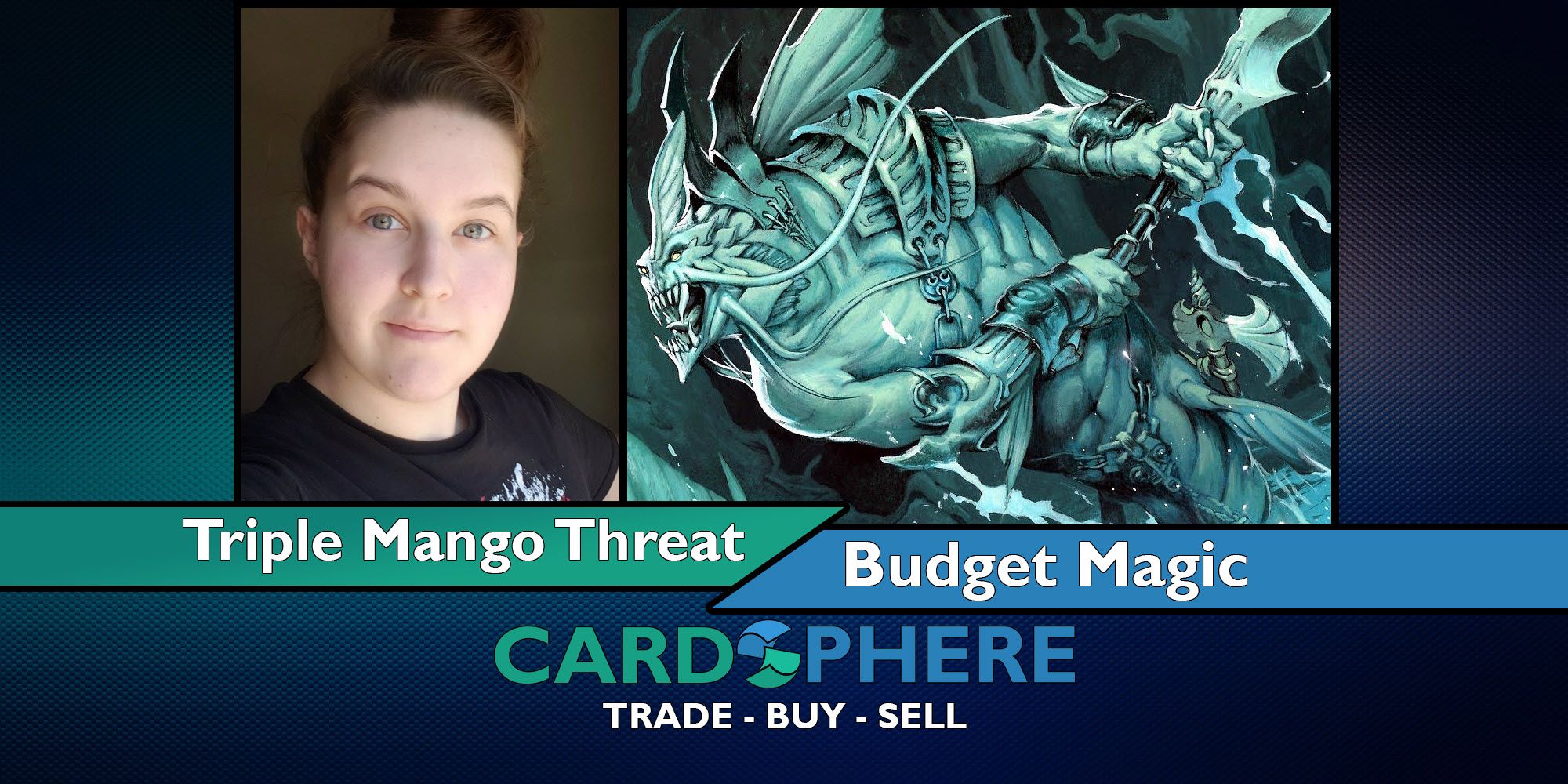 Triple Mango Threat takes a look at some of the budget Blue cards that often get a spot in her Commander decks.