Howdy folks! It's Joe here again with another dose of Legacy content to whet your proverbial whistle. This month we're headed off to War, with a look at the WAR OF THE SPARK! Officially 100% spoiled (and by now you've already gotten your chance to play with some of these cards via Prerelease) this is the most exciting Magic set in quite a while, and there are a lot of cards to be looked at for older formats such as Legacy. While a large majority of the cards to look at are Planeswalkers (of which there are many... THIRTY SEVEN if you count Tezzeret, Master of the Bridge), there's a bunch of other really sweet cards in this set as well.

So without further ado, let's get cracking at War of the Spark, shall we? 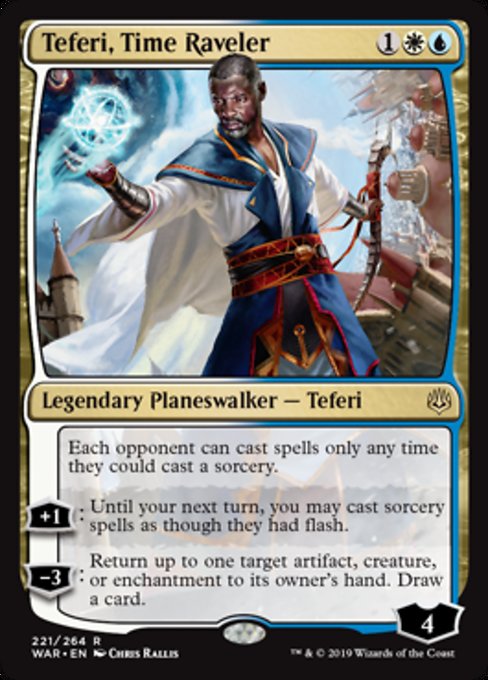 Teferi is one of the big hitters of this set for Legacy, as he performs a short list of very powerful things for only three mana. Being able to cut off an opponent's countermagic and instant speed interaction is very powerful, forcing them to interact on their turn. Sure, your opponent may have an Abrupt Decay or Assassin's Trophy on their turn to deal with Teferi, but that's mana not spent on your turn to try to answer this threat. This card is very powerful, and I definitely see it being played. And if you don't want to take my word for it, take my friend Min's. He's incredibly smart when it comes to the art of the Tundra. 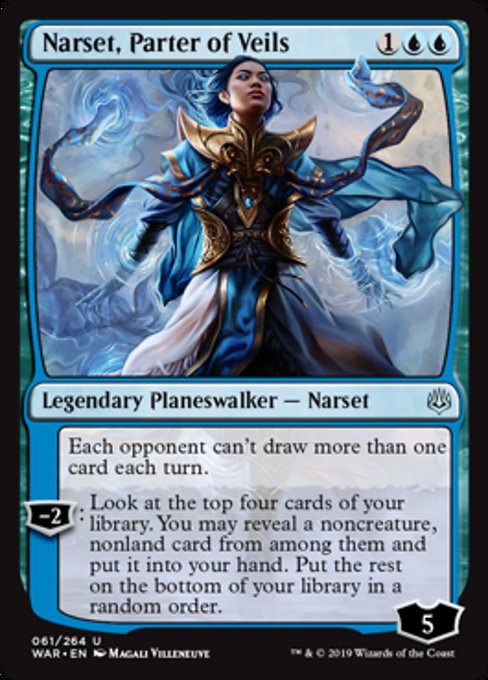 This is yet another blue walker in the three mana slot, acting as a Leovold, Emissary of Trest with a dig ability like Azcanta, the Sunken Ruin but is a little more difficult to interact with in the mirror match. She's definitely pretty powerful, but time will tell if she's that good. That being said, I expect to see people playing around with her and for to stick long term in the format. In fact, people are already running her out in Miracles and other decks. 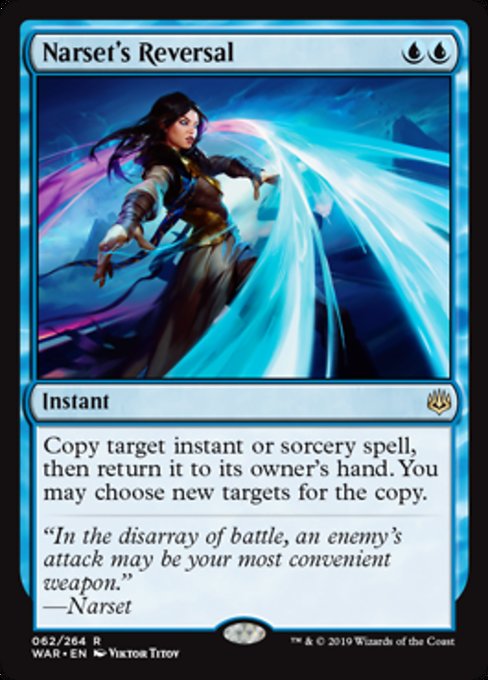 Speaking of Narset, her signature spell is strikingly interesting in the interactions that it allows, and I've heard some people talking about the card in decks like Solidarity (Reset High Tide) and regular High Tide as a way to boost copies of High Tide while also being able to protect your spells with a bounce and copy. This card is intriguing and I'm not sure where it fits outside of this, but it does look exciting on the outside. 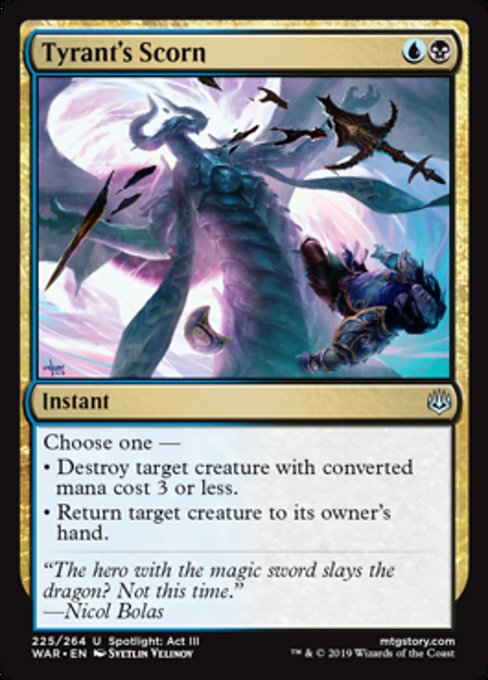 Nicol Bolas is back in a big way in this set, and everything is just dripping with flavor here. What makes this card interesting is that the laundry list of things it deals with is pretty extensive with both modes. This bounces a Marit Lage token, or kills a Monastery Mentor / Delver of Secrets in the same spell, and also pitches to Force of Will. Does this make it playable? Not sure, but it's certainly a sweet card and one to possibly look at. 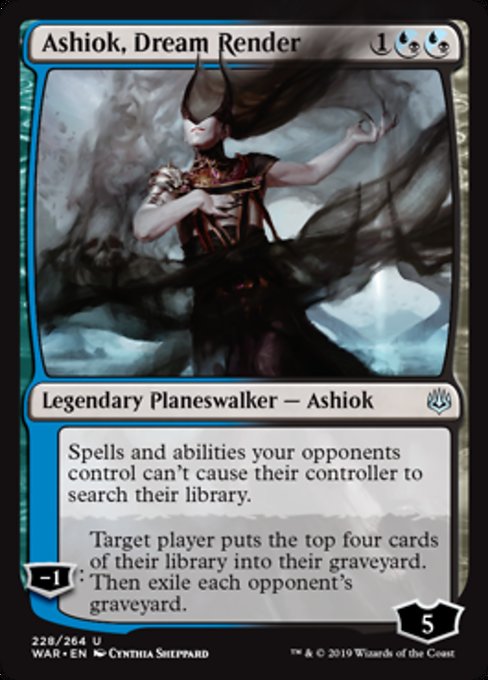 I imagine that all of the Pox players in the room just stood up and clapped when this card was spoiled. Being hybrid mana, being able to cast this off Dark Ritual can occasionally be back-breaking from the standpoint that fetches are a huge part of Legacy, and this shuts them off. I don't believe this makes Pox better, but it does give players a new toy to play with. Outside of Pox, I doubt this sees any play because at three mana, it's a little too slow for the format. 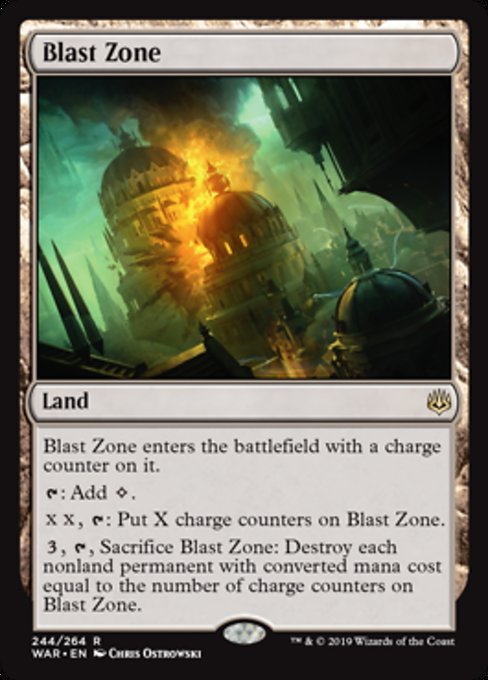 This is probably the first time we've ever seen something like this attached to a land, and that's what makes it so interesting. The obvious downside is that this enters with 1 counter, so being able to murder tokens or things like Chalice of the Void is generally off the table without a way to remove the counter (which frankly requires jumping through too many hoops), but being able to deal with cards like Delver of Secrets and Death's Shadow seems good, especially considering that this card is a land you can tutor up with Crop Rotation. 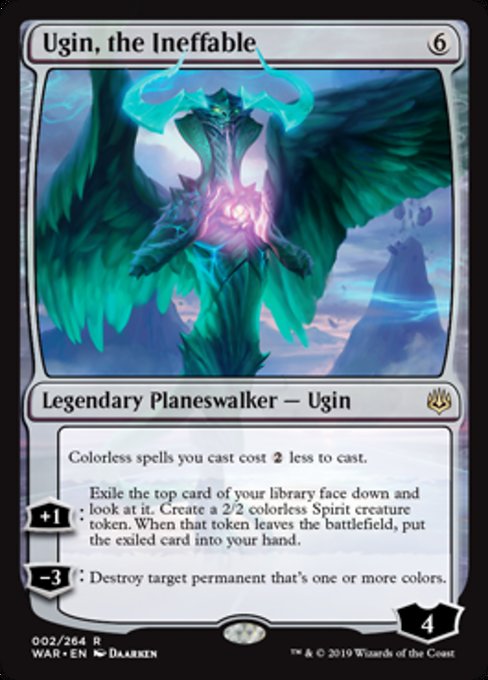 I like this card because I like Ugin (EUGENE!), but also because I think it has an interesting set of abilities and the cost reduction on colorless spells can be pretty powerful in the right deck. I could see this in a deck like Eldrazi Post where being able to play it early with Eye of Ugin in play could theoretically make cards like Thought-Knot Seer cost 1 mana (because of C mana) and make cards like Ulamog, the Ceaseless Hunger cost 6. Gross. 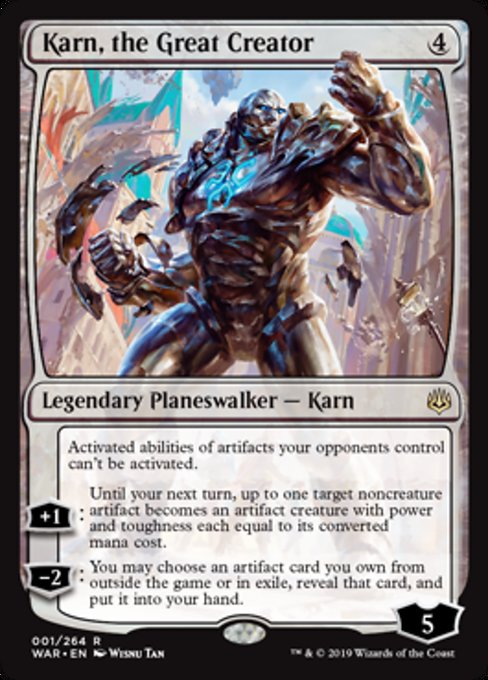 While I'm sure this card is pretty good in other formats like Vintage, I'm not sure how I feel about it in Legacy. Its static ability and +1 are pretty much useless for the most part, but the -2 ability is certainly intriguing. I can definitely see Karn in decks like Eldrazi Post (where mana efficiency makes the -2 much much better) and Painter's Servant decks where being able to fetch the other half of an A+B combo is pretty strong. Also the synergy with Mycosynth Lattice is very strong, and having a Wish target that randomly wins the game is also pretty powerful. I guess I managed to convince myself of this card through the course of writing this! 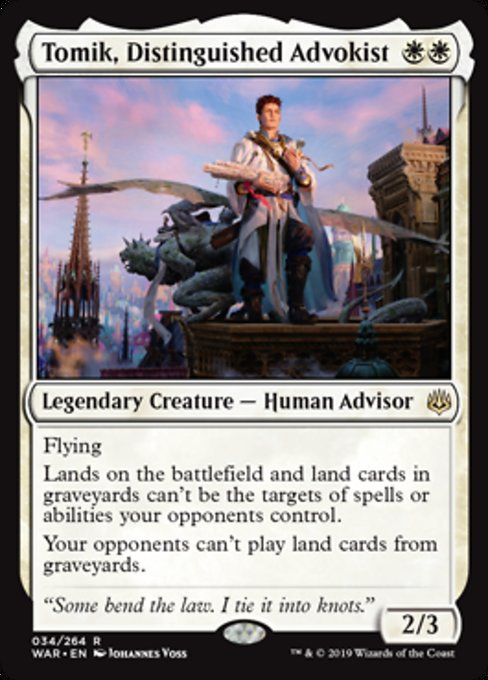 This card is... interesting to say the least. Hatebear effects are really strong with sets these days, and Wizards even admitted that Lands decks in Legacy played a lot into the design of this card, since it basically shuts down Loam, Depths combo, Wasteland, and even Rishadan Port for only two mana. Is this playable at all in Death and Taxes? I don't know, but I think it's interesting to see where it could fit. 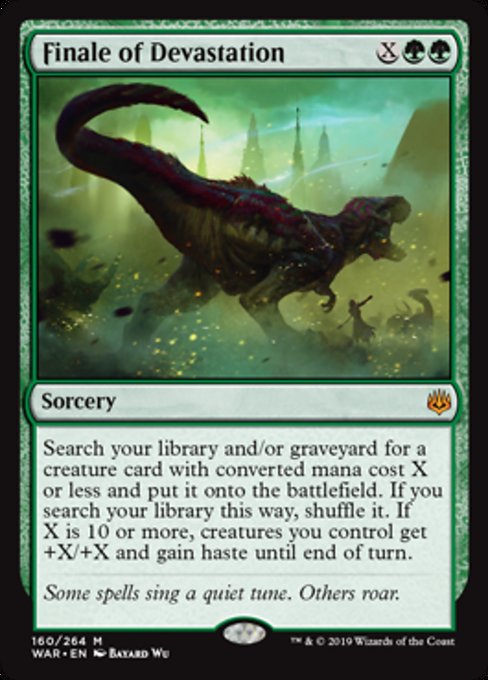 This is a card I could see a deck like Elves playing. So your opponent made you discard Craterhoof Behemoth? Well, this card's got you covered. It's not even remotely surprising that Elves can generate a ton of mana so being able to cast this for X=10 is likely. At that point, you don't even need Craterhoof to seal the game away since all of your cards are getting +10/+10 and haste. I could see trying this in decks like Nic Fit where it acts as an additional version of Green Sun's Zenith that also fetches nongreen creatures, also appealing in that it can return a creature from the graveyard to the battlefield as well. 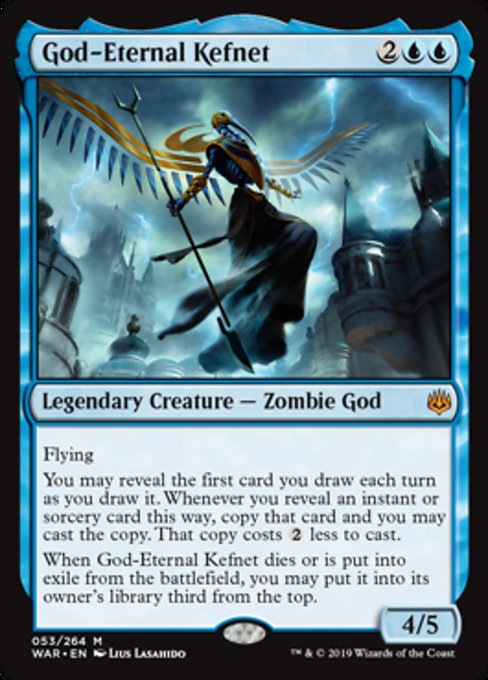 Some folks were pretty hype about this card when it was spoiled, but I am of the mind that it doesn't quite get there. Four mana is a lot and it has to pass the Jace test, which I don't think it quite does. The God-Eternals in general are all going to be interesting cards for Standard, but I doubt they see any play in eternal formats like Legacy. 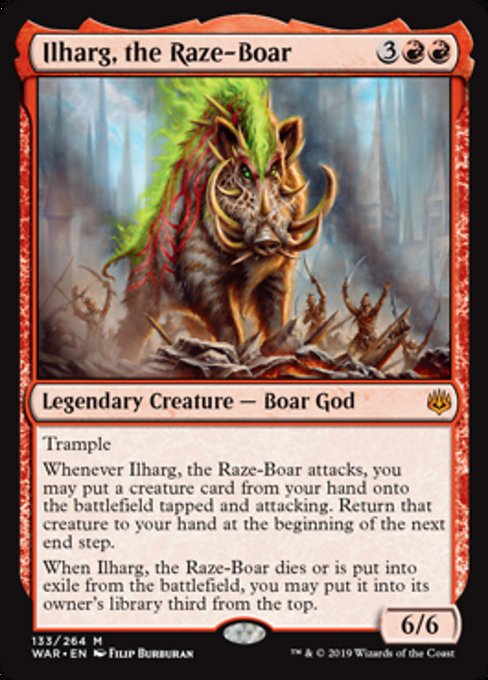 Speaking of another God card, Ilharg is somewhat intriguing but costing five mana is a little rough. Especially for what essentially amounts to a Sneak Attack that has to survive a turn to activate and doesn't also trigger anything like Annihilator. I'm sure this card isn't fantastic in a deck like Sneak/Show, but it could see some play in Nic Fit builds here or there since it is a 6/6 with trample that is incredibly resilient to removal. 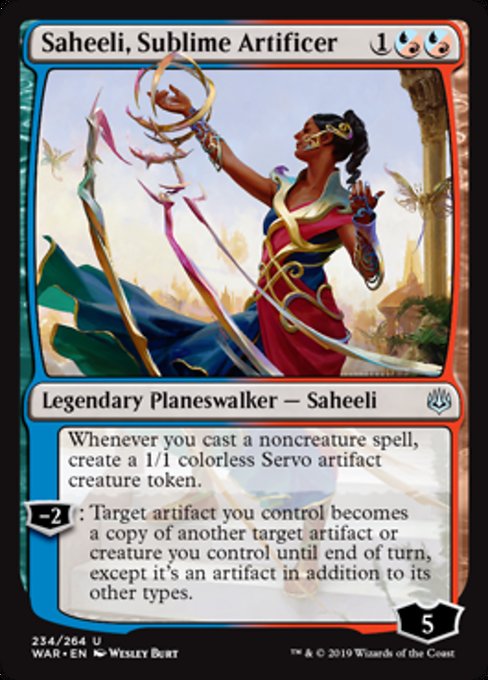 Saheeli is intriguing. I think she's much better than she looks, especially in decks that can leverage her -2 ability well. One really sweet interaction is that you can utilize the second ability to make something like Ensnaring Bridge a different card for a turn to allow a larger attack, and then turn back into the Bridge at EOT. In addition this gives UB decks like Death's Shadow the ability to play a Young Pyromancer effect without having to actually splash into a different color. 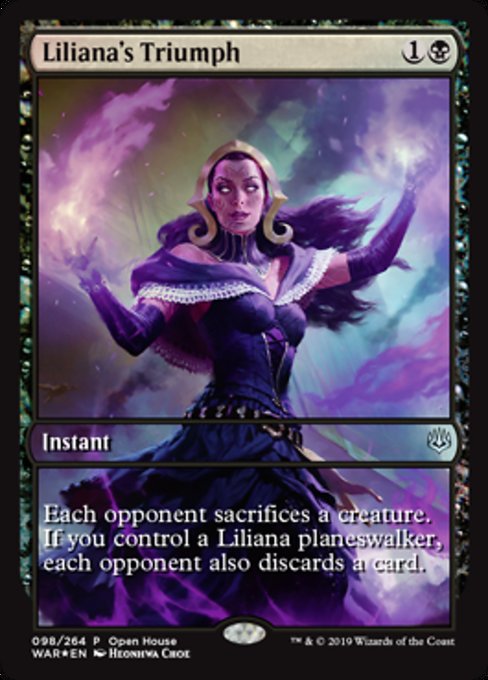 Besides the fact that the name of this card kind of sucks, I'm not super high on it either. While it does a little bit more than Diabolic Edict does when you control a Liliana planeswalker, the lack of targeting is a dynamic not many seem to really get as being a downside. Occasionally there is merit in using Edict on yourself in response to blocking a creature with lifelink (Batterskull) or to prevent triggers on equipment such as Umezawa's Jitte. This card is good, but I don't think it fully replaces Edict everywhere Edict sees play. 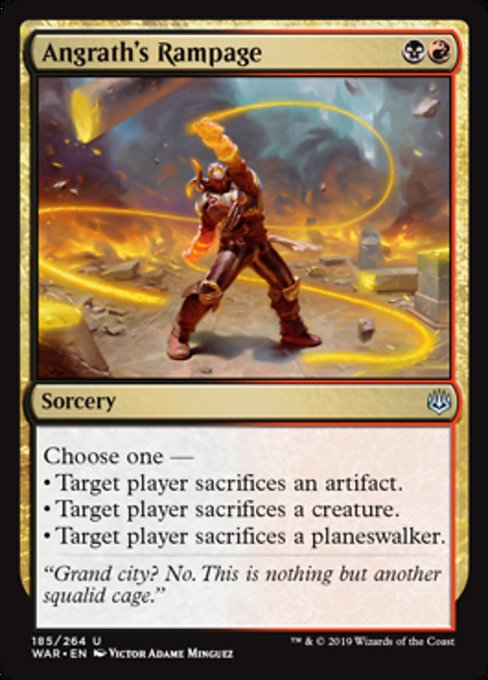 I think we've established that Angrath is just not a happy minotaur already, and his signature spell shows it. This card is great because you can hit a few different card types with it, and the versatility of modal cards is never to be denied. This could see play in Grixis Control in the sideboard just because it helps free up multiple slots due to the modality.

Well, that was a lot of War of the Spark cards, wasn't it? This set certainly has a lot of goodies for Legacy, some good and some maybe good, but I'm excited to see how they will all play out anyways. I haven't been this excited for a set in a while, and it's great to see that Wizards is definitely upping the power level a little.

Anywho, next month we'll get back to some Legacy results and some deck stuff, but for now I must say adieu. 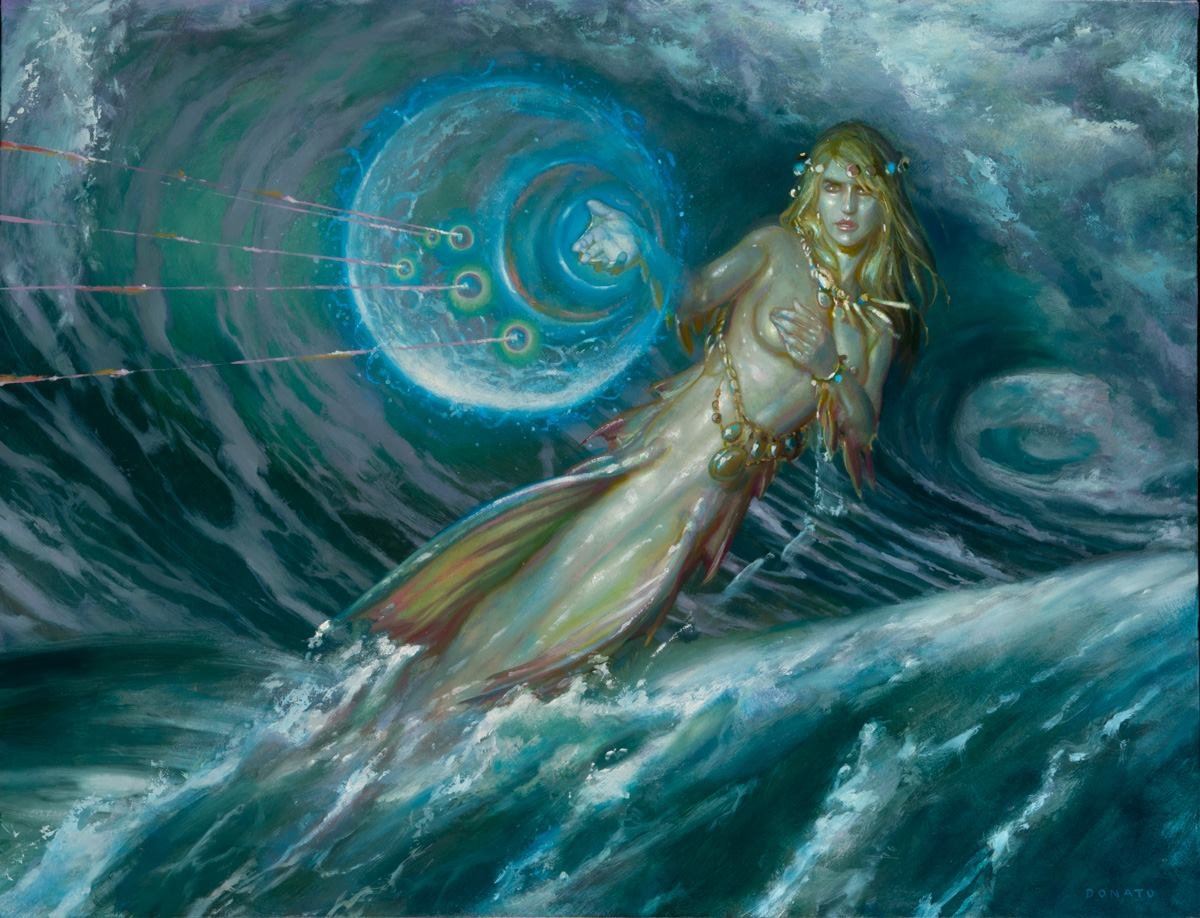 Two decks lord over Pauper, with variants to those archetypes claiming top ranks, too. However, deck analysis seems premature prior to the May 20th Ban Announcement. How might expected sanctions tilt the format? 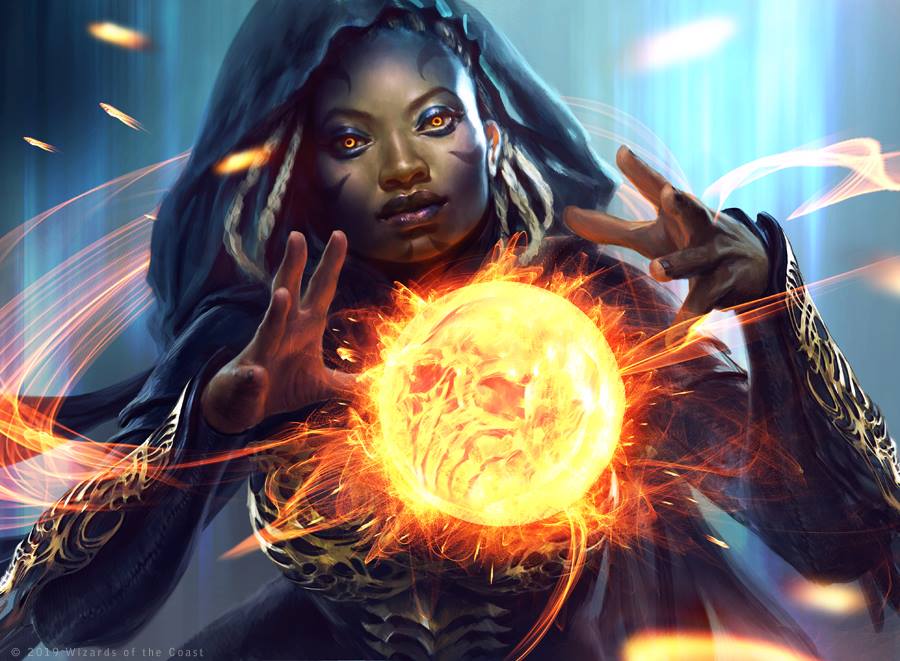 Lord Tupperware shares the favored deck archetypes for WAR coming out of the Lords of Limited Discord.

Trading Posts
—
The Eternalist - Going to War
Share this