Howdy folks! It's Joe again and we're here for yet another month of digging at some sweet Legacy content! This month we're going to be talking about graveyard decks in Legacy, including a focus on the new kid on the block, Grixis Phoenix. That's right, Arclight Phoenix has found a home in Legacy too, and it is a very sweet deck to see.

Graveyard decks operate on a basis of using the graveyard as a primary resource, but they vary in nature across the format. Each of these decks attacks using the graveyard in a different way, making them very interesting and unique. The one major thing they have in common however is that the reliance on the graveyard makes them vulnerable to graveyard hate. That being said, most of these lists have ways of dealing with graveyard hate in some fashion.

While we're discussing these decks, we're also going to go over some intriguing interactions these decks can sometimes have.

If you had told someone that Arclight Phoenix was a Legacy playable card, would you believe them? Well, believe it, because this deck is really cool and very powerful. Let's take a look at a list, shall we?

It's worth noting that this particular list and player (WhiteFaces) went all the way to the Finals on a 6-1 record and fought the Skull Master himself CyrusCG in some incredible games of Magic. Really well worth seeking out the videos to watch on Cyrus' Twitch.

Grixis Phoenix seeks to attack its opponent with a flurry of discard spells and the combination of Buried Alive and Arclight Phoenix to deliver a quick killing blow to its opponent. One of the most noteworthy interactions in this deck is the ability to cast Dark Ritual into Buried Alive on Turn 1 and then follow up with a Lotus Petal into a cantrip to trigger Arclight to swing for 9 points of damage. On Turn 1! This rate of return is insane, and the third spell doesn't even need to resolve in order to make it happen.

Post board this deck can rely on playing a longer game, as it is often able to cast its threats along with its discard and disruption. It also has plenty of ways of dealing with hate permanents both by destruction and bounce (Engineered Explosives/Echoing Truth) and countermagic (Spell Pierce).

One of the most tried and true strategies of Legacy, Reanimator is an archetype that has existed for quite a long time. The deck is a fast combo deck, hinging on using Entomb along with a suite of creature reanimation spells to get an overcosted threat into the graveyard and bring it back to play. Reanimator in Legacy is split into two distinct variants: the classic Blue/Black Reanimator and the modern Red/Black version.

Red/Black is actually now the defacto standard of the deck, having usurped Blue/Black during the reign of Deathrite Shaman, partially as a response to the fact that although Blue/Black could play countermagic, countermagic wasn't nearly as effective against opposing counters and Deathrite. Naturally Reanimator players changed their strategy and opted to go faster, utilizing cards like Chancellor of the Annex to keep its opponent from being able to make a Turn 1 play. Even with Deathrite gone this strategy is still very overpowering versus some decks, and Reanimator is the real King of the Graveyard Decks.

Let's take a look at the list, coming from one of the most prolific Reanimator Magic Online grinders, Eric Landon!

As you can see, the big hitter and the card you almost always want to see to reanimate is Griselbrand (AKA Griselfather, AKA Grizzlebees, AKA Griseldad) because reanimating one is almost always usually a done deal. That being said other reanimation targets (such as actually reanimating a Chancellor of the Annex) can quickly end games as well. But nine times out of ten, Griselbrand does the job.

Post-board this deck is given plenty of ways to fight hate as well as numerous ways to fight certain matchups. There is some note however that you should not always prepare to fight hate. Sometimes, Reanimator can be so blazingly fast that commonly played hate like Surgical Extraction can be useless, so sideboarding can sometimes dilute your game plan.

One of the best players you can check out video-wise for this deck is Eric Landon. Check out his Twitch channel here

Dredge. A mechanic often reviled by some and revered by others, Dredge is one of the more unique ways of utilizing the graveyard as a resource, thanks to its signature mechanic that was printed in Ravnica: City of Guilds expansion. One of the most common things to hear about Dredge is that you're not actually playing Magic and to a great extent that's true. You're playing Dredge. The deck attacks on an axis that most decks aren't prepared for, making it a powerful Game 1 deck that many players simply can't prep to understand well. In fact, a lot of Dredge's wins come off the fact that the opponent doesn't understand well how to interact with it in the first place. As that level of knowledge goes up however, it can be dicey for the Dredge player.

Dredge functions off its namesake mechanic, which allows you to replace instances of drawing a card with Dredging, by taking cards equal to the number next to the word Dredge on the card from the top of your library and putting them into your graveyard, then returning the card with Dredge back to your hand from the graveyard. This functions with several cards that enter the battlefield for free such as Narcomoeba and Ichorid, which in turn synergize with Bridge from Below and Cabal Therapy.

Let's take a look at a list, from Orim67 (who is basically THE gold standard for LED Dredge on all of Magic Online)

Because much of Dredge's core game plan revolves around the utilization of the graveyard, it includes quite a few ways to deal with hate out of its sideboard, from destruction effects to also ways to accelerate faster than the hate (like through the use of Lotus Petal).

Dredge is very unique however and it certainly has its share of fans (myself included!). One of the more prevalent faces of the archetype is Magic Mics' very own Erin Campbell, the Queen of Dredge. Be sure to check out her Twitch channel when you get time!

Dredge also is unique in Legacy due to the fact that outside of the normal Dredge builds there also exists a way to build a variant that does not contain any mana sources or lands whatsoever. This is often referred to as Manaless Dredge, and offers a very unique way to play the game due to the fact that you always want to be on the draw (so that you discard to hand size) to start your game.

That's all the time we have this month folks! We're going to be doing some more with Tips & Tricks related stuff next month as well as talking about where things are sitting at with the state of Legacy in 2019. It's an exciting year and the format feels pretty great right now.

Until next time, may all your Magic be LEGACY!

How quickly can you find your play when facing down End-Raze Forerunners on the stack? Lord Tupperware walks you through his thought process! 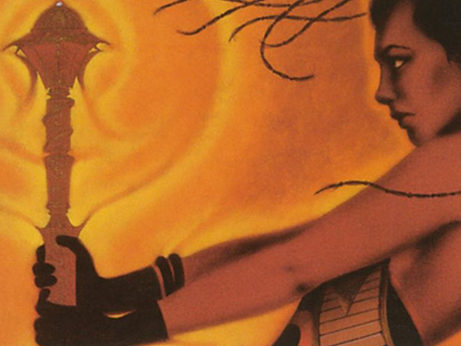 Johnny Slivers spotlights a strong Commander card that is worth reviewing each time a set drops: Isochron Scepter. What will you imprint?