This week is the big time folks. It's the Playoffs! Round 1 kicks things right off with the home team of Team Cardsphere (Randy Buehler, Reid Duke, and Eric Froehlich) vs the Scottsdale Foundation (Paul Rietzl, David Williams, and Matt Sperling)!

As always, you can find this week's decklists right over here.

Bans were in effect for this week, and both teams banned each opposing Dredge deck for this playoff round.

You can watch the vod for this week here:

Right off the bat we've got Randy Buehler (on PO Mentor) vs Paul Rietzl (on Paradoxical Outcome)! Randy begins with a Turn 1 Mana Vault and Voltaic Key. Paul keeps a 6 hander with no lands, but has no Turn 1 play. Randy Brainstorm's into a Monastery Mentor on Turn 2 with plenty of action to make a few monks. This is more than enough to land Randy game 1 as Paul finds zero action.

Game 2 sees Paul making a Library of Alexandria on the play to pass turn. Randy makes a few mana rocks (Mox Ruby and Sol Ring) and casts two Gitaxian Probe (the second off of a Snapcaster Mage). Paul goes with the Library plan, dumping a hand full of artifacts and a Tolarian Academy to draw off Painful Truths into a Sensei's Divining Top. He then casts a Mox Opal to hold up Flusterstorm mana. Randy beats in with Snappy and passes turn. Paul digs into a Tezzeret the Seeker and manages to resolve it. Paul casts Hurkyl's Recall targeting himself and finds Time Vault off Tezzeret, landing him the win for Game 2.

Game 3 shows Randy hitting a Turn 1 Time Vault into Mox Opal with Metalcraft. Paul gets going with a Gitaxian Probe and holds up Flusterstorm mana to pass. Randy hits a Mystic Remora off the top and passes. Paul does nothing and passes turn, forcing Randy to have to pay for a Turn of cumulative upkeep. Randy finds a Mana Vault and skips his turn to untap Time Vault. Paul continues holding up more countermagic while Randy sculpts his hand. Randy continues to pay for Mystic Remora, letting Paul spin his wheels on the three Flusterstorm in hand. Randy goes for the Paradoxical Outcome on his upkeep in response to the Remora trigger, targeting everything but the Time Vault. Paul casts Force of Will to try to counter, with Randy hitting back on his own Force. Paul lets the Force resolve, and then hits Flusterstorm number 1, with Randy being able to pay for the first one. Paul hits the second Flusterstorm with Randy being unable to pay for the second one. After the dust settles, Randy takes his extra turn with Time Vault, drawing into a Gitaxian Probe, and sees that the shields are indeed down. Randy begins to cantrip into casting Dig Through Time while Paul sits on the Concede Game button. Randy finds the Voltaic Key to earn the concession from Paul.

Team Cardsphere takes the board at 1-0!

David Williams takes the stage for Scottsdale in Round 2 on Stax! We see him leading with a Turn 1 Serum Powder off a Mishra's Workshop. Randy goes right into the Library of Alexandria plan and casts two Moxes, passing turn into David's Phyrexian Revoker naming one of the Moxes. Phyrexian Metamorph makes a second Revoker off and shuts off the other one. Randy lifts a Time Walk off a Library activation, passing the turn back to David. David puts the pressure on Randy, swinging in and casting Smokestack. Randy allows it to resolve, having two nonfunctional Mox to sacrifice to a trigger. He Time Walks and plays Sensei's Divining Top to get a Paradoxical Outcome on the board the following extra turn. He draws about a million cards and is able to go off the rails with a second Paradoxical Outcome. He manages to cast a third Paradoxical Outcome off flashback, earning the concession from David.

Game 2 starts with a Turn 1 Sorcerous Spyglass naming Black Lotus (which amusingly enough does nothing to shut off Lotus) to get the train rolling, along with a Crucible of Worlds. Randy draws the Lotus, obviously, and plays it after using Library of Alexandria. David makes a Lodestone Golem and Strip Mines a land. Randy makes some more fast mana, finally taking the time read Sorcerous Spyglass, into casting Fragmentize on the Crucible. David slams a Null Rod, riding on Golem to keep on the pressure. He makes a Phyrexian Metamorph, forcing Randy to have to cast Vampiric Tutor to find Tolarian Academy to cast Hurkyl's Recall. He casts Tinker into Blightsteel Colossus and passes turn. David casts Phyrexian Metamorph again, making a copy of the Colossus into the Lodestone Golem. He presses the attack with his Blightsteel Colossus, prompting David to block and trade. He casts Repeal on the Golem, finding a Paradoxical Outcome off the draw. However, David finds a Chalice of the Void, forcing Randy to cast Paradoxical, but can't dodge the Chalice. He spins his wheels on it, then concedes.

Randy makes Turn 1 Tinker in Game 3, dumping a Blightsteel Colossus into play with Force of Will backup for David's Turn 1 Phyrexian Metamorph to close out the match.

Team Cardsphere takes it to 2-0!

Matt Sperling jumps into the fray, playing White Eldrazi! Randy Brainstorms, dumping a Lotus and a Mox into play to Merchant ScrollforAncestral Recalland pass the turn. Matt makes a Turn 1Chalice of the Voidinto Turn 2Spirit of the LabyrinthwithCavern of Soulsmana, meeting aRepealon Randy's end. Randy drawsTime Walkand takes an extra turn with the ability toSnapcaster MagebackTime Walk, but passes instead. Matt makes the Spirit again, getting it Repealed again. He draws into Dig Through Timeand while Randy is resolving it, Paul Rietzl on commentary makes a Koala and then both cams go dark. Randy finishes resolving his Dig, gettingTolarian AcademyandParadoxical Outcome. His Paradoxical finds a Hurkyl's Recall`, and Matt makes the Spirit for the third time. Randy casts the Recall, prompting the concession from Matt.

Game 2 begins and the cams return! Rejoice! Randy mulls to 5, while Matt's opening is strictly Chalice on 0. Matt launches into a Turn 2 Sphere of Resistance and Randy finds no action. Matt's Thought-Knot Seer tries to resolve, but Randy hits it with Force of Will. Matt follows up the next turn with a Glowrider. Randy hits a Brainstorm but Matt puts a Thalia, Guardian of Thraben on the board. Randy tries to put up the fight with Monastery Mentor but Matt continues the pressure with a Wasteland and Phyrexian Revoker. He finds nothing solid enough and is forced to concede to Game 3.

Randy mulls to 6 on Game 3, dumping a Mox Opal and Mox Ruby but not much else. Matt also does much of nothing other than a Turn 1 Ancient Tomb. Matt makes a Turn 2 Thalia, Guardian of Thraben into Randy's open board, following it up with an uncounterable Thought-Knot Seer. Matt continues the pressure with a Wasteland and Randy finds not much else in the way of a game plan to concede Game 3.

Scottsdale Foundation steps onto the board at 1-2!

Eric Froehlich jumps on board with Stax! He gets things going with a Black Lotus into Crucible of Worlds on Turn 1, while Matt hits a Phyrexian Revoker on Turn 1. Eric makes his own Phyrexian Revoker, using it to trade with Matt's. Matt manages to get an Eldrazi Displacer on board and starts pressuring Eric's life total with it. Eric continues to dig with Bazaar of Baghdad to try to find some action, eventually finding a Sol Ring and Mishra's Workshop to be able to cast Ensnaring Bridge with one card in hand. Matt sees enough and concedes to Game 2.

Eric mulligans on Game 2 to a strong opener that sees both players getting a Turn 1 Crucible of Worlds, while Eric makes a Turn 2 Wurmcoil Engine. He swings in past Matt's Reality Smasher and drops The Tabernacle at Pendrell Vale, while continuing to try to put pressure with the Wurmcoil. Matt tries to stabilize on double Reality Smasher and Phyrexian Revoker, losing one Smasher and the Revoker to a double block situation. He follows up with Rest in Peace to shut off the Crucible. However, Matt finds no answer to the two 3/3's, and concedes.

Matt Sperling returns again with "Moons Over My Hazzy", a sweet monored prison deck! Eric starts off the game with just a Turn 1 Ancient Tomb. Matt kicks things off with a Turn 1 Magus of the Moon into Turn 2 Goblin Rabblemaster. He follows things up with Scab-Clan Berserker giving Matt the Game 1 win.

Game 2 Eric goes on Ensnaring Bridge Turn 1, while Matt goes for the Turn 1 Magus of the Moon. Eric tries to play Phyrexian Revoker, but it eats a Smash to Smithereens. Matt continues to just put on the pressure, dumping the first of two Fiery Confluence on Eric. The second Fiery Confluence seals the match.

Scottsdale climbs back up at 2-3!

Reid Duke takes the charge on Oath! Matt tries for a Turn 1 Blood Moon, running into a Force of Will from Reid. Reid goes for the Turn 1 Time Walk, drawing into Ancestral Recall on his extra turn. Matt makes a Goblin Rabblemaster and swings in with one Goblin. Reid makes enough mana on his turn to hard cast MULDROTHA, THE GRAVETIDE!!!!! Muldrotha holds off the Goblin hordes while Reid finds gas in the form of Dack Fayden. He continues to draw lands however, managing to find a Preordain. He uses Muldrotha's ability to hard cast Griselbrand, earning the concession from Matt.

Matt goes for the Turn 1 Blood Moon again, managing to resolve it this time. Reid however makes a Turn 1 Jace, the Mind Sculptor off a Black Lotus and a Mox, immediately just ticking Jace up hard. Matt makes a Goblin Rabblemaster but gets Sudden Shock'ed by Reid, all the while Reid continues ticking up the Jace. He manages to ultimate Jace for the win to take the series!

Team Cardsphere steps into the playoffs in the Top 4!

Team Cardsphere brought some sweet lists to the table, but it was Randy's PO Mentor and Reid Duke's Oath deck that really made some of the sweet plays of the night. Let's take a look at both.

It's worth noting that this is Randy's actual paper Vintage deck, so his play on the deck really shows the time he's put into it. Congrats Randy for putting two on the board this week!

Reid Duke taking some inspiration from recent Oath lists by Brian Kelly by the sheer inclusion of Muldrotha, the Gravetide. This card is absolutely insane in a format where you can crack Black Lotus and then immediately recast it. Absurd games, and even winning through a Blood Moon!

Let it never be said that Scottsdale Foundation didn't come to the table this week without pulling out all the stops. From PO Tezzeret to the infamous MOONS OVER MY HAZZY, they certainly made for some fun decks.

White Eldrazi can certainly be powerful as it showed against Randy's PO Mentor deck, sticking to a plan of mana denial and taxing, as well as Spirit of the Labyrinth.

This deck is the sweetness. Monored Prison is actually pretty solid in a format full of Shops, etc. It was great to see this deck do its thing, even if it did get shut down fairly hard by Oath. 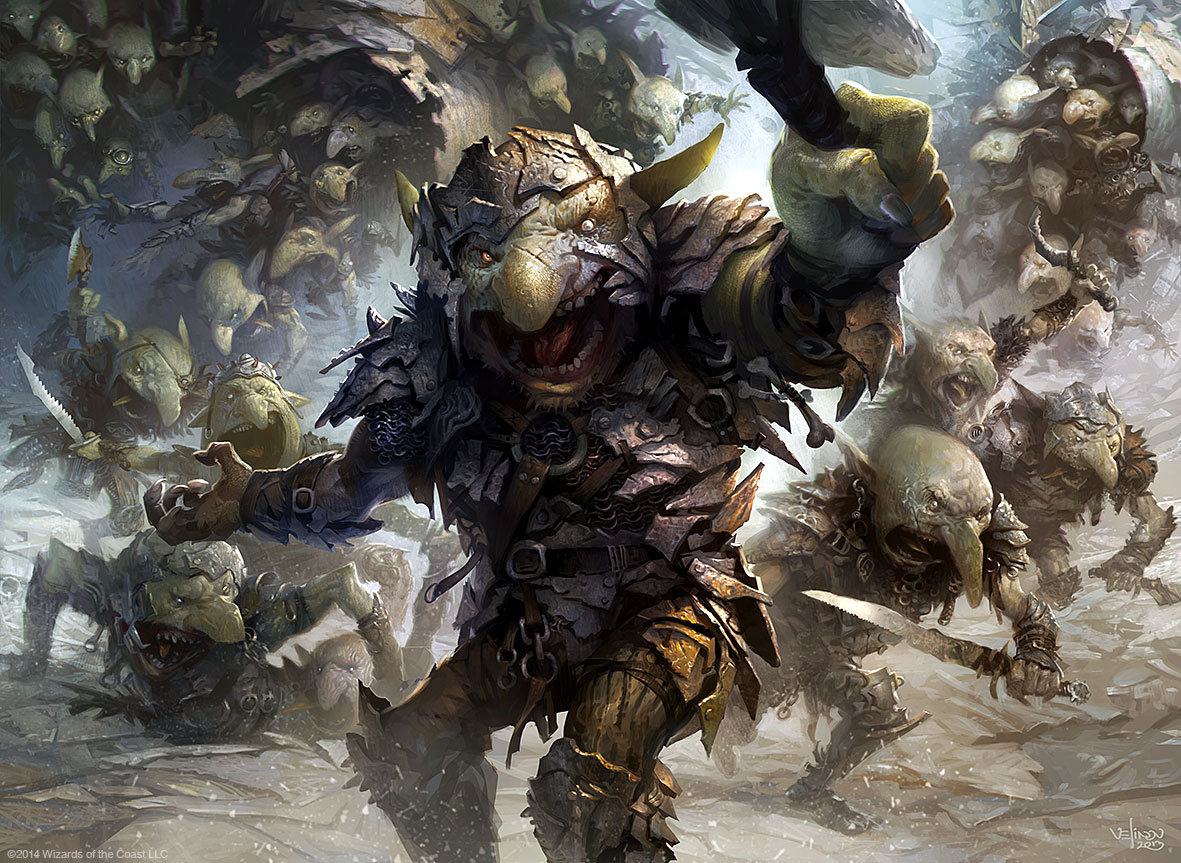 Another list from Steve Horton, this time looking at successes from Core sets passed.

Welcoming Ethan Saks from Lords of Limited to Trading Posts, this article speculates on the speed of the new format.