The community waited with bated breath. With the analysis of the Magic Arena Economy, it became clear that it did not support pure Free-to-Play (F2P) players. From my previous article completing a Tier 1 deck would take between 19.7 and 22 weeks: longer than the duration of the rotation schedule. Now, players could (and have been) playing with suboptimal versions of these: adapting to the Arena metagame and focusing all Wildcards towards a single deck. Now, with the April 25th release, I extrapolate my prior analysis and focus on answering two questions. First, why is it that every time there is an economy update there is always an outcry? Second, are the changes improvements for the F2P player on Magic Arena?

There are Many Different Types of Fish in the Sea

Many people familiar with the Free-to-Play model are familiar with the following terminology for types of players. This is for F2P games in which paying is not just cosmetic (like League of Legends) but instead when investing money leads to progression (examples include MTG Arena and Hearthstone). There are four key classifications for players that actually spend money in a F2P game: "Minnow", "Dolphins", "Whales" and "Slinn Voda". (Ok, I made up that last one. There is no formal terminology, often times these players are referred to as Killer Whales or Megalodons, but with the printing of Dominaria, I’ll stick with my own terminology for the remainder of the article). Often times these terms hold a negative connotation, although they did not start out that way.

Often times, "Dolphins" and "Minnows" are clumped together, as they represent the bottom 90% of the spenders on F2P games. Typically, they make only a single small purchase, but comprise the majority of the playerbase. Those posting on Reddit or social media are likely in this group. (Again, I am only denoting the paying customers in this designation, true F2P players that do not spend money do not have a formal fish analogy. Probably best to think of them as anemones: gracefully flowing in the ocean, enjoying the game at their own pace.)

"Whales," originated as a Las Vegas term for a high stakes gambler. The difference is, a Vegas high roller may win something with their money, and at minimum is comped for everything during their stay. In F2P games, a whale is the primary cash target for a developer. "Whales" are a game’s top spending players, with the top 10 percent of an app’s spenders being responsible for 70 percent of its revenue from in-app purchases, and between 40-60% percent of its total revenue. [1]

"Slinn Voda" are a subsection of this group, as they represent the top 1% of spenders, but generate nearly half of the revenue of the "Whales."

So what does this all mean?

First, we see a breakdown of revenue contribution based on the decile of income spent (from the SWRVE Monetization Report from February 2014). Essentially, in graph form, we see the emergence of the "whales" the top 10% of spenders generating nearly half of the revenue. 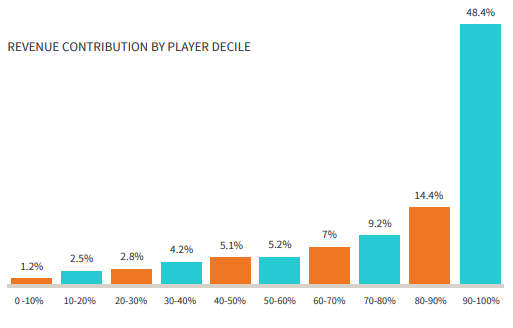 To put this in context, let’s now look at the percentage of the total playerbase that this top 10% represents.

See that little sliver? It’s supposed to be yellow. It becomes evident that over 48% of all revenues come from just 0.19% of all players!

With this in mind, I present a reason why there always there are always complaints regardless of the change. (Note: sometimes it is necessary to evaluate if a setup is truly bad and give feedback. I do not acknowledge that everything is perfect nor that everything is terrible, just providing a reason for so much negativity )

There exists a fundamental disconnect between the goal of a developer and the majority of their playerbase.

For pure speculation, let us assume that the revenue income can be modeled below. This is just an example to illustrate the point, not mathematically rigorous.

The goal for a developer is to extract the maximum possible income from a project. This means they seek to find the peak level of difficulty of acquiring product. Too easy, and most people will not purchase and money is left behind. Too hard and you have the "minnows" and "dolphins" leaving the game, which trickles up to being fewer "whales." Players, on the other hand, want the game to be as easy as possible to complete collections. The less that they have to invest to have everything, the better.

Does this seem bleak? It’s meant to. This was taken to a logical extreme and does not happen in practice. The reality lies in finding a happy balance between keeping the game fun and F2P players happy, and still allowing income for those that wish to spend it.

We begin with a quote, taken completely out of context and without citation (until later). You’ll understand why.

"The truth is a very small percentage of people who download freemium games ever pay anything for them. It’s all about finding the heaviest users and extracting the most amount of cash from them."

This is often the dark perspective taken by cynical people about shadowy corporations. In reality, this is not the case. While yes, studios do target "Whales" as their source of income, the goal is to build a game that satisfies the maximum number of players.

In March 2013, VentureBeat wrote an article in which they interviewed "whales" from several different games, and one quote stood out to me: "To me, a game is only as good as its following and associated community. Without quick queue times for competitive events and a bustling forum, games tend to lose interest with me."

Herein reveals the underlying connection: people play games to have fun. It’s easier to have fun when you have all manners of players involved in the game. This is the true target for a game developer.

Let us return to the quote above. It was from the South Park episode "Freemium isn’t Free." It was a satirical take on corporate greed. I honestly believe that no company is truly that short-sighted that they only try to target "Whales" without a concern for the rest of the community.

With all this in mind, let us return to analyzing the Magic Arena Economy Updates. The major changes are:

In my prior analysis, I took a heavily generous assessment that it would take 15 packs to open the vault. With new data, it now is evident that it takes (without opening duplicates) 30 packs. Again, I take a conservative estimate and assume that with duplicates it takes 25 packs to open the Vault on average. With this in mind, repeating my exact assessment from before we now have completion times for the top decks dropping across the board.

If you wish to implement your own math, a link to my spreadsheet can be found here. You can download it and edit the cells as you see fit.

Overall, we see that this is a huge improvement. With the old economy, players were barely acquiring a pack worth of gold a day. Now, with all the changes, players average an extra pack per week plus the Vault changes. I say that I am fairly happy with the changes, and wonder if they will be tweaked even more in the future.

Thank you all for reading!

Joe Dyer takes us through TSVL Week 2 with his usual enthusiasm for all things Eternal.

Darin Keener takes us through a solid Standard deck to build pre-Dominaria.

Trading Posts
—
Reassessing the Magic Arena Economy: A Drop in the Ocean
Share this