Wizards of the Coast is bringing back Core Sets, what used to be called Base Sets or Editions, those sort-of beginner level sets that come out once a year, aren’t tied into a specific story or plane, and provide an excellent limited environment. They’re designed to complement the existing expansions as well as provide an opportunity in the middle of summer to bring hordes of new players into the game.

With numerous Core Sets having hit the shelves over the years, there are several cards that have made their mark on gameplay, despite the beginner nature of a Core Set. Here are some of the most impactful cards to ever grace a Core Set.

Though first appearing in The Dark and Chronicles, Blood Moon really made its mark when it arrived in the new frame in Eighth Edition, though people didn’t know it at the time. Why? Because that made it Modern legal, when that format was created years later. And Blood Moon has graced Modern sideboards and main decks ever since. It can singlehandedly win games, by hosing mana bases and giving even weaker decks many turns to get their plans in order and eliminate the opponent. Though there have been cries for it many times, Blood Moon has never been banned, and will always have a place in Modern. 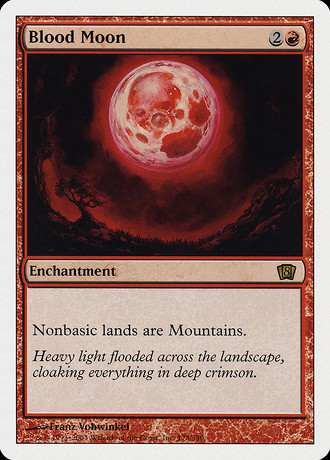 A Stronghold card that first saw a reprint in Seventh Edition, this powerful enchantment stops attacks cold once your hand size is low enough. Aggressive decks that are good at emptying the hand can prevent attacks altogether, at least until Ensnaring Bridge is removed from the table. Meanwhile, the aggressive deck can use alternate means, like burn spells, to take down the helpless opponent. Unfair? You bet. But that’s what Ensnaring Bridge does. And since it was also in Eighth Edition, it’s Modern-legal. 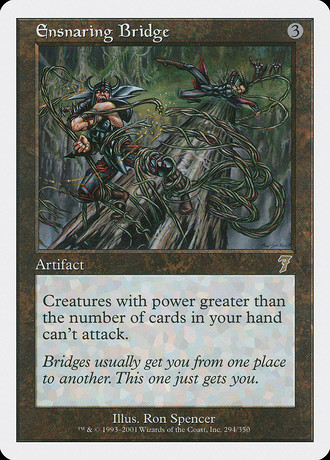 Those who play Commander will know Howling Mine well, a card that first appeared at the start of the game but was reprinted over and over again through M10. The mirrored ability to draw an extra card during the upkeep will usually benefit the opponents first, before you, but if your deck is built to take advantage, that’s fine. Recently, Howling Mine has been showing up in a fringe Modern deck called Owling Mine, a deck so named because of another key card, Ebony Owl Netsuke. 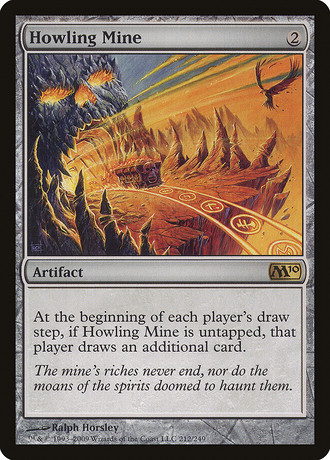 Magic would be an entirely different game as we know it without the trio of lands that first showed up in Antiquities before making their way into several reprints and then in a modern border with Eighth Edition. Powering out Urza’s Mine, Urza’s Power Plant and Urza’s Tower quickly gives the player access to at least seven colorless mana, enough to cast very large creatures and spells. The deck type is called “Urzatron” or simply “Tron” after the kid’s cartoon character Voltron, who assembled several lions to form a larger being. Decks that feature the Tron Lands are among the strongest in Modern, and even find their way into Pauper, Legacy and Vintage decks. 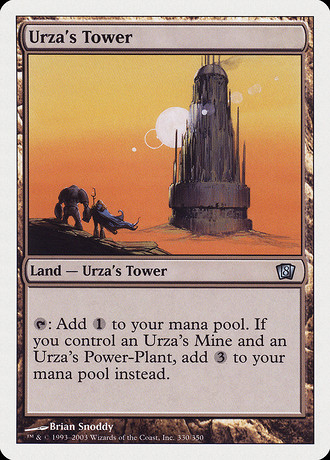 Just announced as a key reprint in Core Set 2019, Crucible of Worlds is a neat little card that allows you to bring back lands that were sacrificed, destroyed or otherwise discarded. This is a handy feature for an artifact to have, especially if your deck’s engine runs on sacrificing lands, such as decks with Knight of the Reliquary. Since it had been so long without a reprint (since 10th Edition, and Masterpieces don’t count!), Crucible was creeping up in price, so it being in the new set is nice to see. 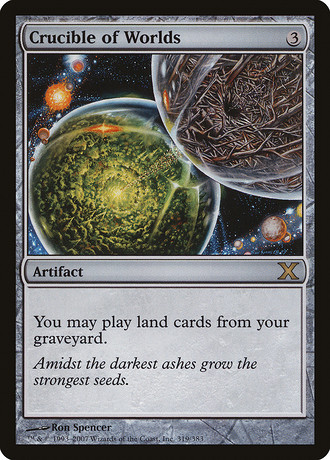 Sorry about that. Soul Warden is an important component for a once-good Modern deck called Soul Sisters that could come back any day now. It uses cards like Soul Warden to gain tons of life and fuel other white cards to win the game. It also appears often in Commander, as Soul Warden is a terrific turn-1 play (as it works on any creature, not just your own). It’s a versatile little card for one white mana, that appears in many core sets. 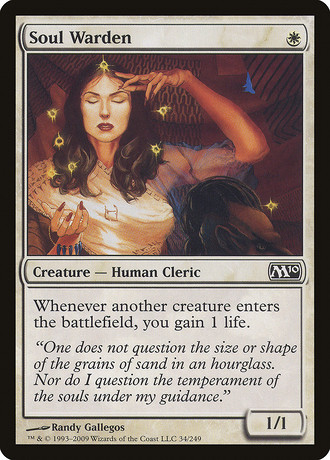 Magic 2010 was the first core set to include new cards and not strictly reprints, and Baneslayer Angel was a doozy. Hitting hard for all white-based midrange decks of the time, this large angel gains life, flies, strikes first and can’t even be blocked by a similarly-sized demon or dragon. Baneslayer is the complete package. This mythic was so in demand during its time in Standard, it was nicknamed “Wallet Slayer.” 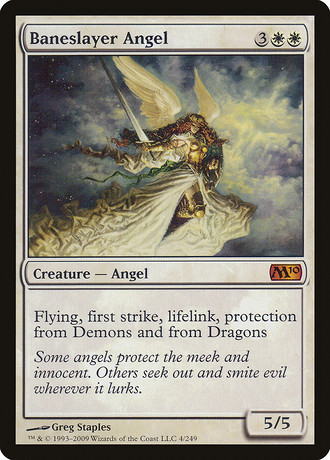 Also appearing first in Magic 2010, Doom Blade kicked off a wave of two-mana, situational, instant-speed removal spells in black. When the removal went from three mana to two mana, it became more difficult for creature decks to stay on the battlefield. To this day, a frequent acid test (and meme) for any new creature in a Magic set is whether it “dies to Doom Blade.” 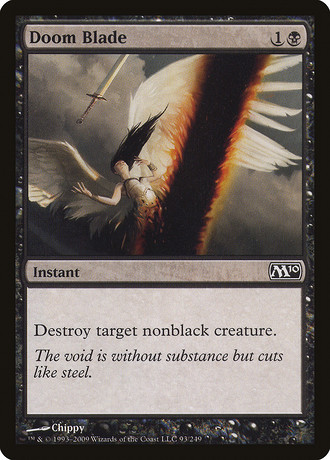 Magic 2011 introduced a set of creatures called the Titans. One for each color, each of which is one of the best mono-colored creatures ever printed. All five were great, but only one rose to the top: Primeval Titan, or Prime-Time for short. Turns out the ability to get any two lands when entering the battlefield and another two when attacking is real good. This guy was format-defining in Standard, gave birth to several new deck archetypes in Modern (which led to Summer Bloom being banned), and was so destructive in Commander that he got banned outright in that format. Card’s good. 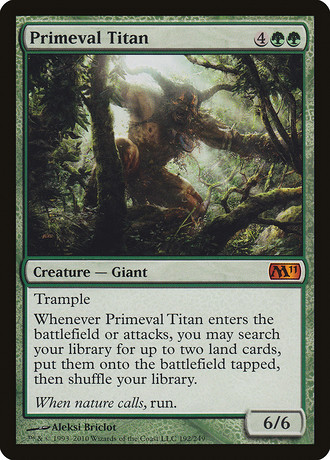 A ridiculously inexpensive clone creature with a drawback that you can live with, Phantasmal Image from Magic 2012 saw play in a wide variety of Standard decks for the ability to copy anything for two mana, gain the enters-the-battlefield ability, and maybe stick around for a couple turns before disappearing. This creature still pops up in Modern all the time, especially as part of the dominant Humans deck. 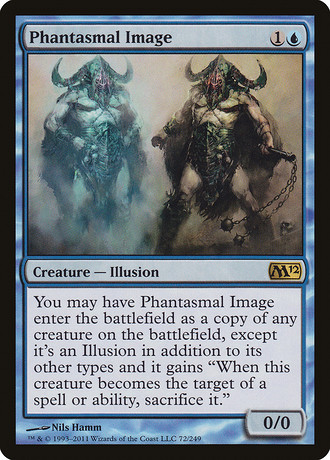 This creature provided ridiculously good value, and was splashable in a wide range of maindecks and sideboards. Not only did it gain life, it spawned a token after it died, meaning that one removal spell was not enough. Thankfully, Thragtusk was not reprinted in Standard, unlike the Titans, which kept popping back up. Though it lasted but a single season, Swagtusk was ubiquitous. 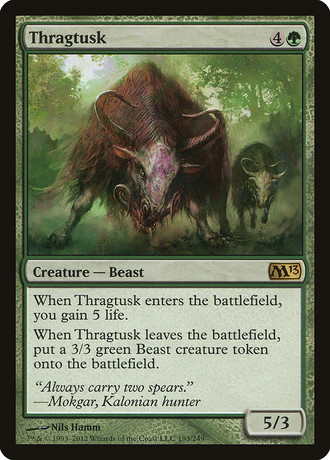 Another Magic 2013 creature that saw a ton of play, not only did Thundermaw Hellkite have haste, 5 power and 5 toughness for only 5 mana, it also tapped and pinged every flier the opponents controlled, virtually guaranteeing it was going to get through for 5. Thundermaw was ridiculously good. 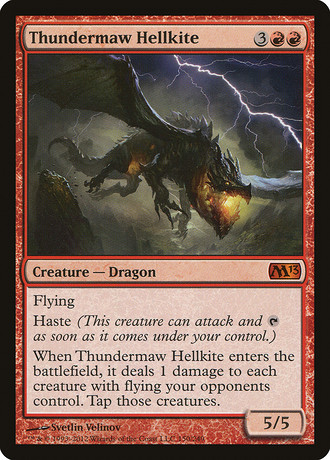 Green-white decks were all the rage during Magic 2014’s lifetime, and at the top of the curve was Archangel of Thune. One swing from this, and your army of smaller creatures got bigger. Archangel got bigger too. This card was a must-answer immediately or games would end swiftly. As one of the chase mythics in this set, Archangel was quite expensive in its time, too. 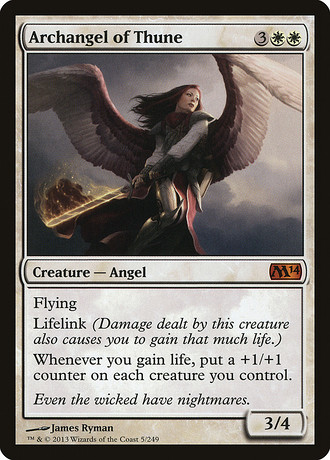 Rarely has a single rare from a Core Set made such an impact on the game, but Goblin Rabblemaster from Magic 2015 is one of those cards. Not only does it spawn a token at the beginning of your attack step, it hits harder for each other attacking Goblin. Sometimes this creature didn’t attack unless the coast was clear. Rabblemaster was content to make tokens all day long. The fact that they had to attack wasn’t much of a drawback in aggressive or even midrange decks. 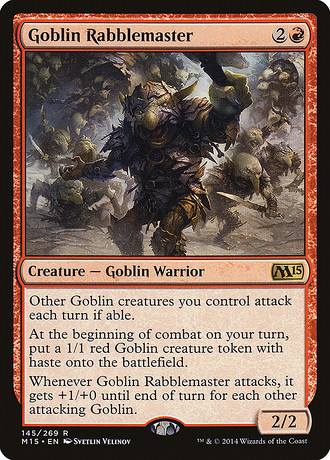 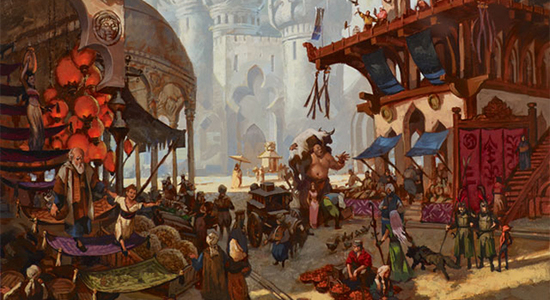 Round 2 playoffs on Team Vintage Super League! Joe Dyer's recap gives you the blow by blow of all the action.

The Eternalist, Joe Dyer, gives us the blow by blow action in round one playoffs of Team Vintage Super League.