Hello everyone! By the time you're reading this, I'll be playing in the biggest tournament of my competitive MTG career, brief as it may be so far. This weekend is the Star City Games Invitational. For those of you that don't know, the Invitational is a tournament held by Star City Games during SCGCon and you have to earn an invite to participate for the $100k in prizes being offered. I earned my way into the tournament by winning an Invitational Qualifier tournament with Modern Infect in August. It was the day before the banning of Hogaak, Arisen Necropolis and I defeated 3 Hogaak players on my way to winning the tournament and earning my qualification. If you're interested in the tournament report, check out the video below.

I originally was going to write an article on how to build decks in Pioneer with it being a new format, but I think that Guillaume Robert has already done a great job with covering the Pioneer format here on Cardsphere. Since I was longer writing that article, it gave me even more time to test Pioneer for the Invitational.

Here's what I was looking for when choosing my Pioneer deck:

With that being said, let's talk about some lists that I tried out. Detailed below are the stock lists, not the exact 75 from my testing.

The goal of Dredgeless Dredge is to mill yourself and get value off of cards that like being milled like Narcomeba and Creeping Cill as well as cards that like being in your graveyard like Prized Amalgam and Haunted Dead. The deck was fun to play and it's a proactive strategy, but aside from Creeping Chill, the deck didn't feel broken. There was definitely more powerful things that I could be doing and it was a bit too inconsistent and random for me.

This list was really fun to play, but requires a lot more work to be done to it. As stated before, reactive strategies usually aren't where I want to be at the beginning of a new format. One thing that's nice about Midrange decks like this is that they have some game against everything. No matchup ever feels truly unwinnable. However, for a Midrange deck to be good, they require proper predictions of what the meta will look like at any given tournament. As much as I wanted to sleeve up Thoughtseize and Young Pyromancer, I didn't feel confidant in my ability to choose the proper number of specific removal spells vs threats this early on in to the format. The banning of Felidar Guardian also helped take me away from this deck because there was no longer a draw to playing Rakdos Charm like there was when the cat was legal.

Nothing says proactive strategy quite like 4 Monastery Swiftspears and 4 Boros Charms. I have experience with the Modern version of Burn as well as Mono Red Prowess, but honestly, this Pioneer version of the deck was just underwhelming. It might not seem like much, but there's a huge difference between Wild Slash or Shock and Lightning Bolt or Lava Spike. I was off this deck fairly quickly.

After much testing, this brings me to the deck that I'm going to be playing at the Invitational. It's given me the best results and checks off all the boxes that I wanted my deck to check off. Is it proactive? Yes. It's hard to see a deck with 4 Gingerbrutes and 4 Bomat Couriers and not say it's very proactive. Is the deck doing broken things? Yes. This was the thing that was missing from the previous few decks that I had tried.  I get to play Smuggler's Copter, 2 mana 5/5 flyers, 0 mana flyers that suddenly attack for 8 out of nowhere, and 2 mana burn spells that deal 5 damage instead of 3 like I had gotten used to from the previous red decks. Does it feel like I win against the "best" decks in the format? Yes. I have the speed to beat the control and ramp decks, the bigger creatures and board stall breakers to beat the creature matchups decks, the resiliency and inevitability to be beat the midrange decks, and the sideboard slots to help with closer matchups like Mono Green and Phoenix. I tested with cards like Springleaf Drum and Toolcraft Exemplar, but the Drum was too low impact without having more 0 drop creatures to break it and the Exemplars forced my mana base to be extremely awkward.

Decklists aren't due until Friday morning, but I think I'm fairly locked on the 60 cards in the main. Stubborn Denial has been incredible so far, so I might try to slide another one into the 75 somewhere and Ghostfire Blade has been good too, but I'm not sure on what the correct number of them is because I don't want to cut any more of the creatures or lands, so that doesn't really leave me with much left to consider. The sideboard is pretty good so far, but not perfect. I'll be working on specific sideboarding decisions on the drive down to Virginia, which may result in me changing a few of the sideboard cards.

My selection of a Modern deck is a much simpler, less interesting story. I played Infect to qualify. I know how to play it well. I think it's well positioned if I can avoid Burn and Jund. So, I'm playing Infect. In all honesty, I was much more concerned with my Pioneer deck because we play that format first and if I don't do well in Pioneer, then I don't even get the chance to play Modern. I don't have my 75 picked out for Infect yet, but the list will be fairly similar to what I played at the IQ to earn my way into this tournament. It'll more than likely have a different sideboard, a slight change in the numbers of the pump spells, and a change to the number of Dismember and Spell Pierce in the main.

The last thing I wanted to touch on in this article was the preparation that I've doing for the tournament that doesn't actually involve in Magic cards. The longest tournament I've played in at this point in my career was 9 rounds. I've done this once. Normally, players with good records can intentionally draw with their opponents to make their way into the top 8 of a tournament which can alleviate a round of playing and give players a small break. When I took 2nd at a PPTQ with Black Green Rock during M19 Modern, I had to play my 6 swiss rounds and 3 rounds in the top 8 all consecutively. Since many of the players at this tournament will be used to playing SCG Opens and Grand Prix where 8 rounds a day with no break is nothing to them, I wanted to make sure I had good endurance for the tournament. I wanted to do this so that I wouldn't lose any games in later rounds due to me being tired and making dumb mistakes. To do this, I tried reducing the number of naps I take in the time leading up to the tournament so that m body would be used to staying up for longer periods of time. This may sound laughable at first, but I'm like a 6-8 naps a week kind of guy, so this was a big change. On a similar note of improving my endurance for the tournament, I switched up some of my eating habits. I tried to cut down on less healthy foods that can contribute to tiredness and sugary foods and beverages as well. In fact, I actually cut out all beverages that aren't water.

Next week will mark 2 months since the last time I had a drink that wasn't just water. I'm down around 15 to 20 pounds so far and that has additional benefits to go along with just the health aspects. If you watch my YouTube videos or have every just seen a picture of me, you'll notice that I always have a jacket or sweatshirt on. I'm a bit self conscious, but slowly getting better at it. Anyway, the wonderful people at Cardsphere sent me a t-shirt to wear to represent them while I'm at SCGCon. Can't wear a jacket because I have to be able to show off that beautiful Cardsphere logo! So, the 15-20 pounds lost will help with the self-confidence knowing I'll look at least a small margin better in my Cardsphere t-shirt than I would have previously.

In preparation, I've also been trying to make my brain as sharp as possible. Doing small things like brain teasers everyday while I wait for class to start, strengthening my memory so that I can remember things like what all the cards were that I saw in game 1 to help me make sideboarding decisions for games 2 and 3, and improving my perception skills so that I can pick up on small details that will give me an edge like if my opponent has kept the same card in their hand for multiple turns and has just been playing the ones they draw each turn or body language clues that my opponent makes when they look at their opening hand or make a decision on what card to take with a Once Upon a Time.

I fully understand that to the typical Magic player who just likes to sit down and enjoy a casual game with their friends, I sound like some kind of absurd maniac. However, I want to be the best version of myself that I can be going forward and if I'm deemed crazy for it, then that's all right with me. I'm really looking forward to this event and I feel like I'm going to learn a lot about myself as a player and as a person at this event!

If you're interested in following along with my experience at the Invitational and possibly a classic or some PTQs that I play in while I'm there, then be sure to follow me on Twitter @Alby_MTG where I will be tweeting a lot over the course of the weekend. If you don't want to follow along there, I'll also be writing a tournament report and overall experience article that will be up here on Cardsphere when I get back.

Also, if any of you are going to be at SCGCon, let me know or come up and say hi if you see me there! 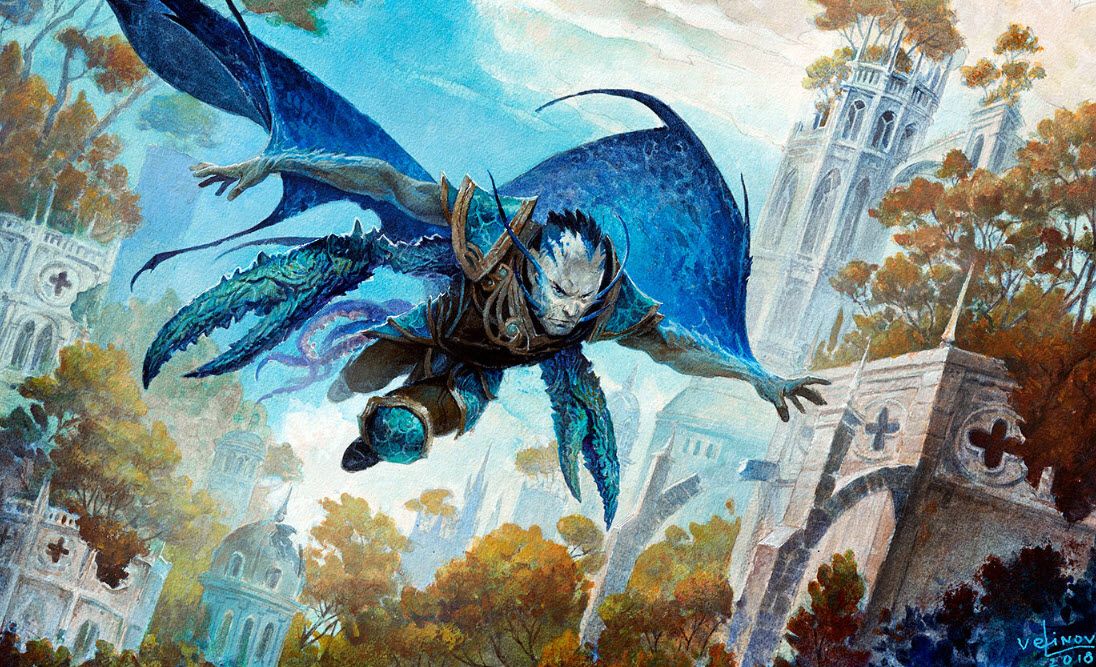 Oko is broko and we all expect the banhammer Monday. So, what comes next? Darin Keener puts his money on rejigging an old flame.

Joe Dyer runs down the most notable decks from Eternal Weekend.

Trading Posts
—
Pioneer Testing and the SCG Invitational
Share this