“We were allowed some complexity at common, but less than we had used in the past, which meant it was a resource that had to be carefully managed.”
– Mark Rosewater on His New World Order

Wizards of the Coast (WotC) owns its currently stagnant pauper metagame. Sadly, their inaction in controlling the meta poses several significant challenges to new or returning players in the format. As WotC ramps into e-sports recognition, they must address several key game-balance issues. Players hunger for their share of million-dollar prize support earned through online gaming, and ranking eligibility extends to Pauper. What might players face in this metagame? How might we circumvent some obvious problems?

"We've heard some recent discussion amongst the Pauper community about the potentially problematic interaction between Gush and Foil, the latter of which was recently added to the environment through Ultimate Masters. While our metagame data indicates that acting at this time would be premature, we'll watch the format as decks adjust to play with and against this combination."

Here, Duke identifies one problem about card interactions. Two years ago, WotC banned Peregrine Drake after re-introducing it a common-rarity print in Eternal Masters. Like Cloud of Faeries before it, it offers blue strategies a chance to immediately protect by untapping lands used to cast it. By themselves, neither Gush nor Foil outright win games. Players leverage mana costs to their favor, and both cards help accomplish this goal hyper-efficiently. 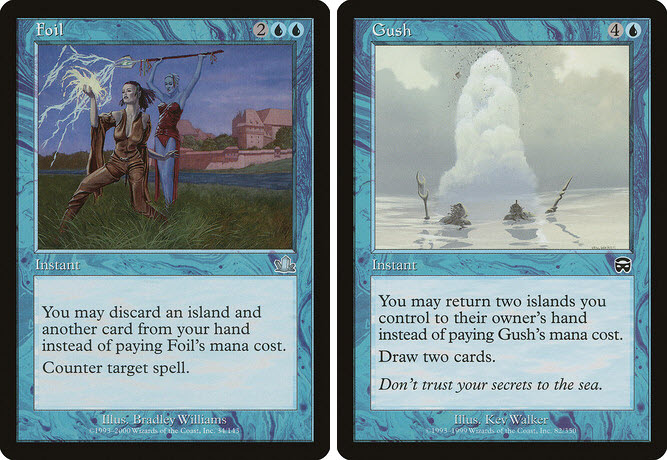 For example, imagine playing against an opponent whose only two lands - islands - sit tapped after casting their latest spell. Although wary of counter spells, many players will fall into a trap and now cast their own spell. Instead, our opponent casts Gush by returning both islands to their hand, and draws two new cards. Next, they pitch an island and any other card to Foil. With no mana, a skilled blue-control player opponent countered our spell, drew two cards, and helped fill their graveyard (Gurmag Angler likes this approach, and justifies its off-color addition within a dominant blue shell).

Casual onlookers may point to an easy fix: Ban Foil because it presents a problem as a new common. However, such recourse just addresses symptoms and not a bigger causality. Lead game designer, Mark Rosewater, wants new players introduced to Magic: the Gathering. To this end he artificially limits common-rarity complexity. While unintended, his "New World Order" trickles into our beloved format. We can rarely expect a new card to hold its own against a 20-year-old Gush when design space wants fewer confusing abilities and subsequently ineffectual cards. Other rarity shifts, like Tethmos High Priest, quickly found an interesting home without disrupting game balance. Introducing cards outside of a Standard-legal set need not abide by Rosewater's subjective power level constraints.
...but then we got Peregrine Drake in Eternal Masters.
...now we have Foil.
...and "Monarch" cards like Palace Sentinels, which came into Pauper unexpectedly through online Treasure Chest rewards. Their digital printing opened-up repeatable card drawn in white decks. Return the Human Soldier, and any number of other value engines (i.e. Prophetic Prism) to hand with a Kor Skyfisher, and we see this color's contribution to a Boros strategy; high-value damage spells protect the Monarchy during combat.

In the future, we can more closely examine these two domineering decks. However, deck analysis seems premature prior to the May 20th Banned and Restricted Announcement. Two years ago, WotC issued a surprising out-of-season ban on Peregrine Drake, but only after the blue flyer ruined an entire summer of gameplay. How might expected sanctions tilt the format? More importantly, how do we interpret new direction regarding common-rarity complexities? Does Andrew Brown's hyperlinked-Tweet suggest a change-of-plans from Rosewater's New World Order? Who steers common design? Where are they going with Pauper, a fan-favorite format that now helps pave a path to professional (online) gameplay?

With so many questions, I turn to Guild Members from a recently war-torn Ravnica. Their opinions help align newcomers, and identify current challenges facing Pauper from shared perspectives on strategy. Neither House Dimir nor the Boros Legion offer anything different, because they have no desire to step-down from their lofty metagame shares.

SIMIC COMBINE: Thus far, data reveals how tightly two decks represent Pauper wins. Blue-control and Boros Monarch/Bully (variant) account for nearly 60% of metagame Top 8 Rankings, and never fell below 50% over nine months. Modern Horizons could offer alternatives, those akin to older power complexities of Gush and other overplayed cards. If no bans occur May 20th, we surmise an answer to the slow format lies within that special set.

AZORIUS SENATE: WotC must legitimize the Pauper Format. Common card legality feels confusing in light of online eligibility only. This decision rightfully eliminates Hymn to Tourach. Other cards, like Active Volcano, never saw Magic: the Gathering Online (MtGO) release as commons, and thus may offer some untapped potential. Furthermore, Hada Freeblade, Spatial Contortion, and Circle of Flame are banned in Pauper, despite their addition to MtGO. Promotional cards’ downshifted rarities, it seems, have no place in Pauper. Painting a house while its foundation cracks helps nobody; WotC must recognize the Pauper format, and unify it responsibility.

ORZHOV SYNDICATE: Sell or trade Gush. This card holds more monetary value in paper than its digital copies. Should it survive after the May 20th Ban Announcement, a Bear Market makes it easy to reobtain. In all other formats, Gush is outright banned or, in Vintage, Restricted (one total copy among 74 other cards). Market watchers rarely tap widely available common card for speculation. If the format shall grow, we must innovate ways to revitalize it. Yes, we advocate for the Restriction of Gush and/or Foil if WotC executes no other actions.

CULT OF RAKDOS: We count more powerful damage spells at our disposal, like Skewer the Critics, Ob Nixilis's Cruelty and Heartfire. Still, our colors rarely see Top 8 rankings. Yes, Gurmag Angler sees play in control decks, as it does in many other constructed formats (including Legacy and Vintage). "Burn" decks offer a Four-Turn clock in Pauper, but even then stumbles against many counter spells or protection (read: Prismatic Strands). Without restorative justice, a classic archetype of Magic: the Gathering may fall out of competitive favor. To whom do we address our concerns? Who is the "face" of Pauper? Do players dictate format direction, or does the game manufacturer? Be loud on social media with whatever opinions you like. Take advantage of the chaos! Our Guild offers one of the best third-options available to new players in Pauper, but requires skilled timing to master.

GRUUL CLANS: Seek freedom by embracing individuality. We think problems visit those likely to welcome them. Since we already got an uncommon-to-common clan member card, may we also have Guttural Response in response to Tier One decks? House Dimir and the Boros Legion seem well-positioned in the metagame, but rogue decks can thrive, too. Mages wait to counter or remove certain key spells, so surprise them with something unexpected! Test your mettle by knowing what - and when - prominent decks commit to the board state. Beat them with new combinations. Understand jargon like “the stack” and different game phases- these are laws of our urban jungle. We overthrew outdated edicts on Pauper. Heroes rise from visceral challenges. Will you answer the call to adventure?

SELENSYA CONCLAVE: We recognize a healthy balance in all things, including the Pauper format. Predators easily become prey. However, the metagame fails to include aggressive decks, and even Burn archetypes rarely hold lasting competitive sway. Traditional analogies of Rock-Paper-Scissors no longer apply. Culling the herd remains a natural occurrence, so we rally behind swift action to restore format diversity. Vivien's Grizzly promises us unique card draw, and may allow green decks to build incremental advantages for green decks. So too does Gideon’s Sacrifice help stop bleeding from Electrickery and damageto our small-statured armies. We mature beyond pre-chewed food; we must outgrow the New World Order if we hope for any place in the metagame, and continue to supplement non-dominant decks.

GOLGARI SWARM: We face an identity crisis. Decks using Tortured Existence compliment the Dredge mechanic, and even Undergrowth. However, we lose footing to off-brand Aristocrats; Black now adds Red or White to the shell to acheive different pacing. Our spies believe prints of Hissing Iguanar and Imperious Oligarch signal a move away from Golgari utility. Both newcomers run with our namesake, Golgari Brownscale, but without needing access to double-green casting costs, thanks to its life gain ability and graveyard mechanic. Cry about bans to someone else, because we must first fight and stabilize ourselves.

IZZET LEAGUE: Delver of Secrets sees play in older formats. In fact, pro player Andrea Mengucci suggests this centerpiece harkens back to Legacy; outvaluing opponents who play anything different. He further believes Augur of Bolas may offer greater potential than the Insectile Aberration. Take note: Augur of Bolas is a relatively new addition to the format, down-shifted to common. In concert with Gush and Foil, Augur of Bolas accelerates answers. While the Izzet League lacks its own variant of Dimir Guildmage, we have Fire // Ice and sufficient reasons to believe we can present a serious threat once we assemble our available arsenal. Other Guilds treat us with as much disdain as House Dimir and the Boros Legion because of our scientific optimism.

Written explanations accompany each ban levied by WotC. Our game culture may predict future edicts based on past rationale. Rarely do multi-billion-dollar businesses admit mistakes on their own accord (of which ‘bans’ would be considered a hindsight mistake). This transparency reaffirms trust. A healthy format considers diversity, and this extends into new market gains. WotC has a clear path to strengthen its game, invite new players, and profit on e-sport success -- all while offering million-dollar prizes. Their story continues next week, but who sits poised to listen?

Lord Tupperware provides some advice on how to put together a working color deck in MTG WAR limited. 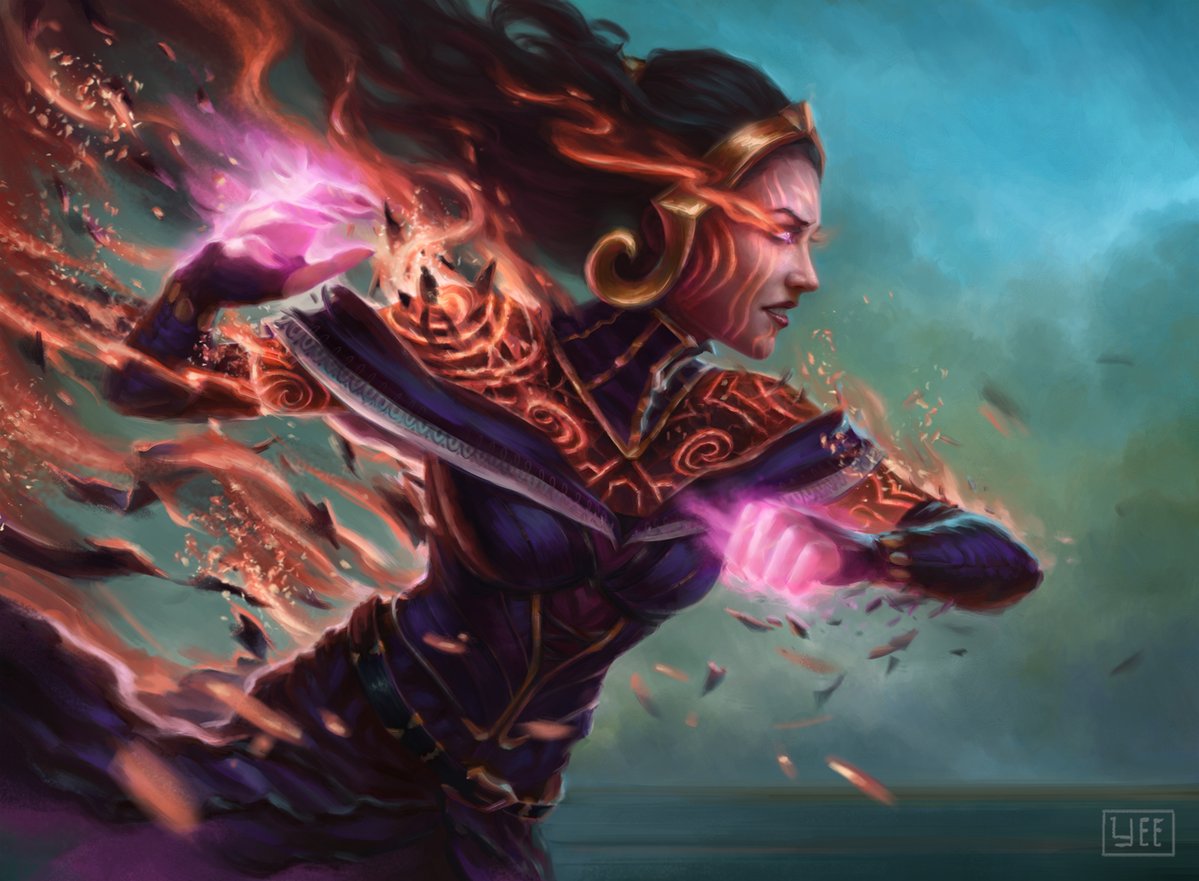 Joe Dyer's take on some of the cards in WAR that may find a place in Vintage and Legacy.