I don't often get to write about my non-Standard predilections in this column since there are lots of great columnists at Cardsphere who can give you better advice in other formats than I can. But one of my favorite types of deck to play in all formats is a niche deck that doesn't have a lot of strident supporters but just seems to click well with me: enchantress decks. Enchantments were one of the reasons I was drawn to MTG in the first place, since they fundamentally change the most basic rules of the game from that point forward. Magic is about attacking.. .unless I have a Ghostly Prison, and then you're out of luck. Creatures enter the battlefield ready to block... unless Authority of the Consuls says that they don't. Creatures attack and block... unless Starfield of Nyx says that ENCHANTMENTS do, too. Plus enchantments just seem to annoy my opponent, which makes me love them.

So as Theros approached, I was hopeful that there might be an actual, true-to-life Enchantress deck in the new Standard. Poor Satyr Enchanter had come and gone in Standard without a real home (although it lives on in Pioneer and Modern Enchantress builds), and it was going to take more than a couple of enchantments to make it come to life. Thankfully we not only got an enchantress, but for the first time, one that's also a win condition. I started messing with a couple of different deck lists, but when I found that Bryan Gottlieb had tested with one that was different by only a couple of cards, I confirmed with practice that, yes, he is a better deckbuilder than I am. So I've been playing it a great deal on Arena and have climbed with a reasonable enough pace that I think it's a very good deck and a lot of fun to boot!

To this point, most of the available slots for an Enchantress deck ( Satyr Enchanter, Eidolon of Blossoms, Argothian Enchantress) had two things in common: they were relatively fragile, and they couldn't actually win you the game. You would almost never attack or block with them, and if you did you were probably losing that game. But Setessan Champion changes all that. Yes, he draws you a card when an enchantment enters the battlefield. That's the thing that makes an Enchantress. But while 3 mana for a 1/3 isn't ideal, the three-toughness body makes him an adequate blocker from the moment he steps on to the battlefield. In addition, the +1/+1 counters is unique in the realm of enchantresses.  I can't exaggerate how big of a deal it is, because it means that your enchantress will scale with the game. The longer your enchantress is on the board, the more likely it is to both dodge removal and be able to attack and block effectively. To this point, most enchantress decks also required something that prevented your opponent from attacking into your tiny creatures (like a Ghostly Prison or a Sphere of Safety), but Setessan Champion does that on his own. As he gets bigger, he discourages your opponent from attacking. It's such a good card that I've immediately thrown a playset of it into my Pioneer Enchantress deck, and I would consider playing it in Modern as well.

This doesn't always have to be present, but many of your win conditions are going to be expensive so it does help to have an enchantment discount. It took a year for this one to finally be relevant, but Starfield Mystic is great. I'd messed with the Mystic a few times before this in some enchantment-heavy Death and Taxes builds and in other formats, but it's doubly good now that its second piece of text is finally relevant. Before this, it was rare for enchantments to leave the battlefield. Yes, there would be a bit of enchantment removal here and there, but most of that was in the sideboard and never really added many counters. But with the return of Sagas and the introduction of the Omen cycle along with much more enchantment removal, even the lowly Mystic can get big enough to attack in the late game.

This is another difficult place for Enchantress decks, as a lot of the win conditions in other formats (like Starfield of Nyx and Sigil of the Empty Throne) often don't impact the board until following turns. You have a breathless turn of essentially doing nothing and hoping everything stays the same before you can start to win. THB adds a new way to win the game that has never existed insofar as it does the work of the aforementioned enchantments, as well as leaving a decent body on the ground in the form of Archon of Sun's Grace. If you're drawing enough cards, you're going to make a ton of 2/2 flyers and you can win with those alone. But even without that ability, a four-man 3/4 flying lifelinker is a card that a lot of decks would play by itself. It's exactly what you need when you're behind on life totals but trying to stabilize the board right before you're able to take full advantage of your plan. There are a couple of other options in a solo Cavalier of Dawn to get back enchantments and turn one of your early mana dorks into a 3/3 in the late game, and there's also a smaller possibility that you'll be able to materialize your single Nylea, Keen-Eyed into a big attacker, but the Archon is the primary win condition.

I couldn't previously mention the effects of "a planeswalker specifically for enchantress decks" in my template because, well, there hasn't been such a thing. But it's a thing now. Calix is a bridge in this deck; a way to do a couple of different things that the deck wants to do as repeatable effects. He enters with a good amount of loyalty, and immediately either uses his +1 to find an enchantment (be aware: it's not a 100% guarantee that you'll find one... I have whiffed more often than I'd like) or uses the -3 to remove the opponent's biggest threat. The really strong thing about the -3 ability is that you end up turning one of your existing enchantments into a Banishing Light. While you can obviously do this with one of your stronger enchantments, it is especially good on an early Wolfwillow Haven that has faded in importance after hitting your land drops. Even if your opponent has boarded in enchantment removal spells, that's not the enchantment they'd like to use it on. You'll notice that I haven't mentioned Calix's ultimate. That's because I've never used it. I've either been happy using the other two abilities over again, or I've been able to ult but have declined because there wasn't enough value in my graveyard to make it worthwhile.

The Rest of the Cards

The remainder of the deck is a mixture of ramp to get us to our bigger stuff in the early game and enchantment-based removal of one form or another. The ramp package is a mix of Paradise Druid, Wolfwillow Haven and The Birth of Meletis. The first two are straight ramp spells (although I will admit that I've made the wolves... once... I'm not proud of it), and the third helps to make sure that you hit your third land drop but also provides a bit of stall (in the freaky face-wall) and a bit of life in a cheap early enchantment.

The two copies of Dryad of the Ilysian Grove are... weird. I'm not gonna lie. It FEELS like there should be a better card to insert in this place. Its abilities don't often come into play. Yes, it can smooth your mana, but we're a two-color deck and there often aren't a lot of issues with covering the colors. Yes, there are times when you get to play an additional land on turn 3. But I don't know what that's worth. Its prime value is that it's an enchantment creature, and the body is a good size and a great blocker at three mana. Beyond that if you were going to experiment to fit your meta or preferences, I'd start here.

Finally, Elspeth Conquers Death doesn't really fall into the above categories. It's closer to a finisher than just a removal spell, but every phase of this Saga is strong. It immediately removes your opponent's best creature. The next step makes it very difficult for your opponent to remove it from the board, and the final step brings back your best creature or Calix from the graveyard. It's often true that one or more of the steps won't matter all that much. If you don't have anything in the graveyard or your opponent is playing a creature-heavy deck, one step might fizzle. But you're getting so much value from the others that it doesn't much matter.

The sideboard is another place where you can make big changes. Eidolon of Obstruction is possibly the worst card since there aren't a lot of Superfriends builds in the meta right now, but it's cheap and a good body that can gain life if nothing else. Thrashing Brontodon is also a big body with removal attached to boot. Go-wide decks need a sweeper, and Shatter the Sky is a good option. My absolute favorite card in this sideboard, however, is Sky Tether. I know, this sounds weird, but hear me out. A one-mana card that slows down your opponent's most painful attacker and brings down a flyer? Please. When this card is good, it's very, very good. When it's not, it's at least cheap. And activates your Setessan Champion. So there.

Otherwise, the deck plays very similarly to other Enchantress builds. You want to ramp into your Setessan Champion and start your card draw engine as soon as possible. Then, remove obstacles, find your finishers, and gradually drown your opponent in card draw. I haven't really found a matchup where I feel like I'm hopeless. Maybe the weirdest, however is the other Selesnya deck out there in Bogles. Since most of our removal is targeted, we just die to the nut draw. But then again, nearly every other deck dies to it as well. It does add a layer of protection, as many opponents will see an early Temple of Plenty and think Bogles, but we're playing a completely different game, which can make our opponent target things that should best be left alone. I've had a good amount of success with this build, and I hope you do as well.

Give it a try, let me know what you think, and as always... drive friendly! 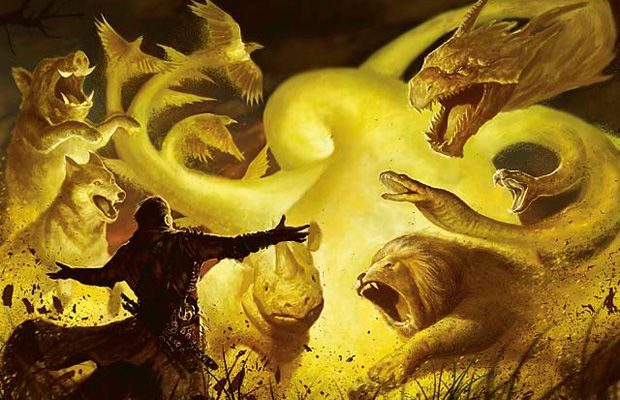 Orren McKay puts together a Primal Surge deck led by the Shattergang Brothers. Our sympathies to the pod. 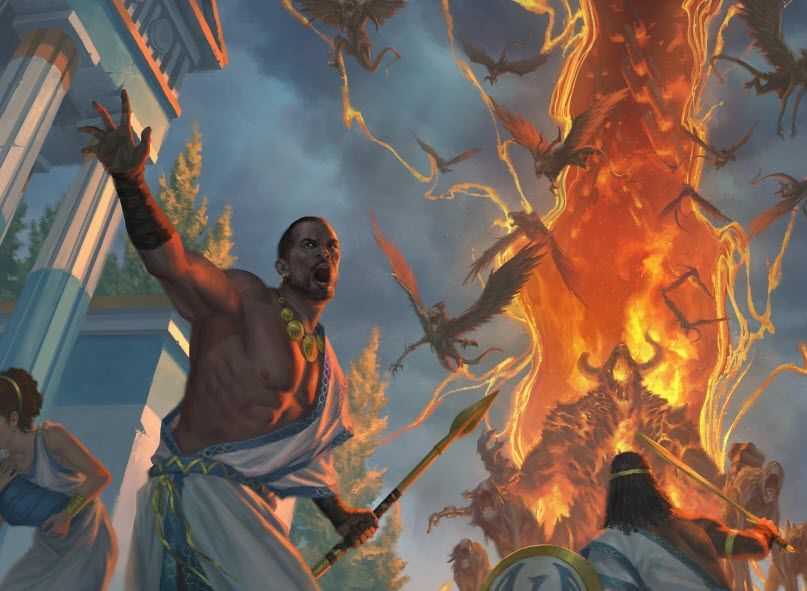 AlbyMTG has been surprised by how many more #MTGTHB cards are slotting into Pioneer. Here are his top picks!

Trading Posts
—
Nothing Up My Sleeves: Standard GW Enchantress
Share this