No, I am not describing Brock Lesnar's most recent match on a PPV. This was the sound of millions of Modern players refreshing the webpage for the latest Banned & Restricted announcement. And boy it did not disappoint: 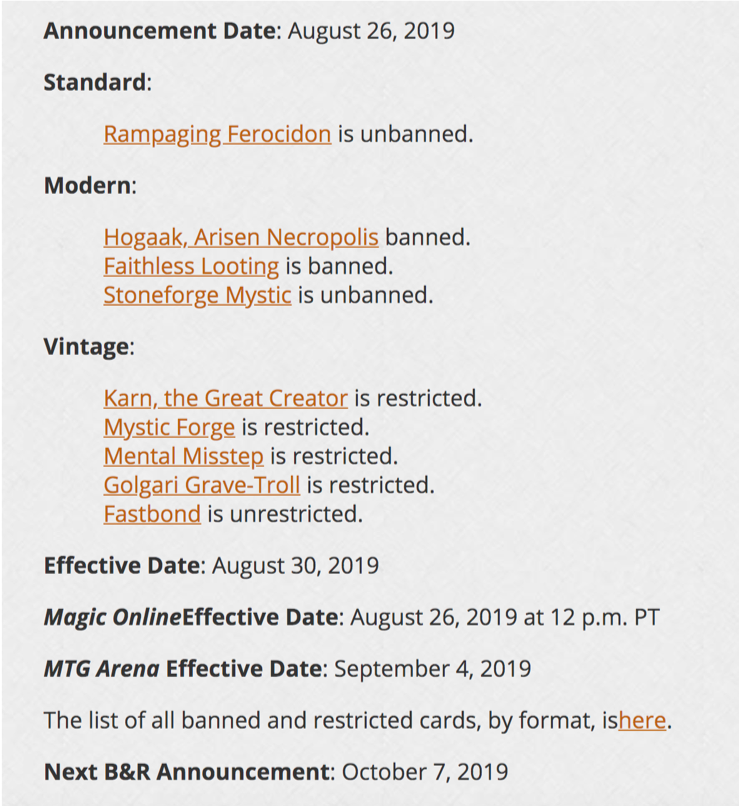 Woah. While the demise of Hogaak, Arisen Necropolis was pretty much expected by everyone, there was still hope that Faithless Looting would be safe for a little while longer. In the explanations for the decisions, Ian Duke gives some details:

By our data gathered from Magic Online and tabletop tournament results, over the past year the winningest Modern deck at any given point in time has usually been a Faithless Looting deck. [...] As new card designs are released that deal with the graveyard, discarding cards, and casting cheap spells, the power of Faithless Looting's efficient hand and graveyard manipulation continues to scale upward. Regardless of Hogaak's recent impact, Faithless Looting would be a likely eventual addition to the banned list in the near future.

And then there's the elephant in the room, the return of Stoneforge Mystic. Many had clamored for its unbanning since there were way worse things going on in the format: flocks of Phoenices on Turn 2, 8/8 tramplers galore, even Turn 1 wins at a rather consistent rate (I’m looking at you Neoform)! And so this time WotC indulged, opening the floodgates to a whole new range of decks… or so they thought, but more on that later. First let’s look at the immediate casualties of the B&R update.

OUT: Hogaak, Arisen Necropolis - So Long, And Thanks For The (Rotten) Fish

Let’s be honest for a minute here: Hogaak clearly had to go. The deck was too oppressive, and every modern event came down to “play Hogaak or lose”. Once the archetype started taking at least half the top 8 spots of many recent tournaments, we all knew something was going to happen - especially considering there had already been an attempt by WotC to nerf the deck when they banned Bridge from Below. That wasn’t enough, and now the deck is no more.

Can the build survive? Doubtful, as the payoffs for dumping so many cards in the graveyard (Stitcher’s Supplier, Satyr Wayfinder) are nearly non-existent outside of the traditional Dredge haymakers Tasigur, the Golden Fang and Gurmag Angler, but at that point why not just play Death’s Shadow? Another option is to switch back to the DredgeVine strategy, but again, why not pick up straight Dredge which has proved to be the better graveyard-based deck over the past year?

Ah, yes, I can hear you from here: “but Dredge lost Faithless Looting!!”. Worry not, my card-slinging friends, there are actually a bunch of very real, very reliable replacement options! For starters the obvious one is Insolent Neonate: it is technically half a Looting to begin with, although not drawing first before the discard effect has its downside. Next is Tormenting Voice, bringing some redundancy to Cathartic Reunion, but it feels like a choice by default. So what else is out there?

Enter this past weekend’s SCG Modern Classic; if you haven’t seen the results, here is the Dredge list that won it all, courtesy of SCG and Jake Peralez:

Yes, there really are four copies of Tome Scour in the maindeck. I know it sounds insane, but the vast majority of the spells in Dredge are meant to be either played for free and/or from the graveyard. There is also a non-zero chance that with a Turn 1 Tome Scour, you can get a couple of dredgers in the yard and/or drain for 3 and/or put a Narcomoeba in play which conveniently brings back a Prized Amalgam. I know it sounds like Christmas in September, but we have all seen this archetype do crazy things out of nowhere. There is one concession that has to be made in the manabase to be able to afford that one Blue mana: a combination of City of Brass/Mana Confluence/Gemstone Mine sounds like a given, but Peralez went a step further and added a Steam Vents for good measure.

Another option I have been looking at is Dangerous Wager: with the expectation that graveyard hate will be less prevalent out of sideboards, I have less of a problem discarding my whole hand if it means I can dredge twice at instant speed - and get a chance at bringing back these Prized Amalgams one turn earlier. By the same token, another instant speed option is Costly Plunder, which can make depleted Shriekhorns useful again. By no means am I implying that either are on the same power level as Faithless Looting, but I believe they are still worth testing.

IN: Stoneforge Mystic - the 6-Card Playset

I, for one, did not understand the mad rush to buy Stoneforge Mystic copies that started a femtosecond after the announcement. Not that I think that the card is overrated, far from it; it's just that I don't believe a sequence that goes [Turn 2 tap out for Stoneforge, Turn 3 slam Batterskull/your favorite Sword] is rewarding enough in itself in the face of some of Modern’s most linear and aggressive strategies. Think about it this way: would you give Burn, TitanShift, Storm or Tron two free turns to get set up?

That is why I was very intrigued by what the next batch of MTGO Modern Leagues results was going to show. The result? Out of the 88 lists posted on August 30th, 29 of them featured Stoneforge Mystic:

That is ONE THIRD of all lists now using Modern’s shiny (slightly) new toy. As a matter of fact, looking at all these 5-0 lists made it feel like there had just been a rotation in this Eternal format. There are even archetypes that are not traditionally built for it but that are still running Stoneforge Mystic, because why not right? In addition to the lists above, one could find: Vizier Devastation, Taxes decks (all flavors), Bant Snow, CoCo, UW/Jeskai Control, Affinity, MarduPyro, and Soulherder. Adding a Stoneforge package to these builds is mostly “free” (no impact on the manabase) and offers an alternate route to victory in the maindeck. It can also be easily sided out to bring tools from the sideboard without modifying the core of the deck.

In terms of equipment tagging along with Stoneforge Mystic, it remains very classic: Batterskull is an auto-include, and most time a Sword or two is also present. As for which Sword is included, I have a chart later in this article recapping the most used ones in the most succesful lists of the weekend (SCG Open, SCG Classic, MTGO MCQ, MTGO Challenge, MTGO Leagues).

What about these new decks that were supposed to emerge from the unbanning? Well, indeed there are new archetypes that have started showing up online and in tabletop, and I’ll start with the most out there.

There were rumblings of a Colossus Hammer + Sigarda’s Aid combo deck since the M20 spoiler was released, and Stoneforge Mystic brings consistency along with Kor Outfitter. This is a different take on Infect centered around a UW shell, and looks like a lot of fun to play. The coming days and weeks will show if this is actually a viable strategy.

Piloted by Ally Warfield to an excellent 22nd place at the SCG Open, missing top 8 on a heartbreaking win-and-in in the last round of Swiss, this deck looked like a blast to play. Ally gave a very good deck tech interview during the tournament, which I encourage you to watch (courtesy of SCG coverage).

It attacks on so many angles, it feels like three decks crammed into a single one: the Eldrazi plan, the Karn/wishboard plan and then of course Stoneforge Mystic. Playing Turn 2 Thought-Knot Seer into Turn 3 Reality Smasher is a real possibility and will often be back-breaking. Any resources spent on dealing with one of the gameplans will leave the door wide open for the other two. Also, I think my favorite potential interaction is Sword of Feast and Famine untapping all lands and turning on Eldrazi Displacer activations.

Since we mentioned the SCG events, let’s now look at all recent tournament results.

Remember what I mentioned earlier about giving time to aggressive strategies? That’s just about what happened in Dallas/Fort Worth for both Modern SCG events this past weekend: no Stoneforge Mystic deck made top 8 in the Open, and only one reached that standing in the Classic, with Jason Bryant at the helm of an Orzhov take on the strategy:

At the same time, there were three Burn decks in the Open top 8, and two more in the Classic! But more than just top 8 placements, the Open Day 2 metagame holds the true story (courtesy of SCG coverage team): 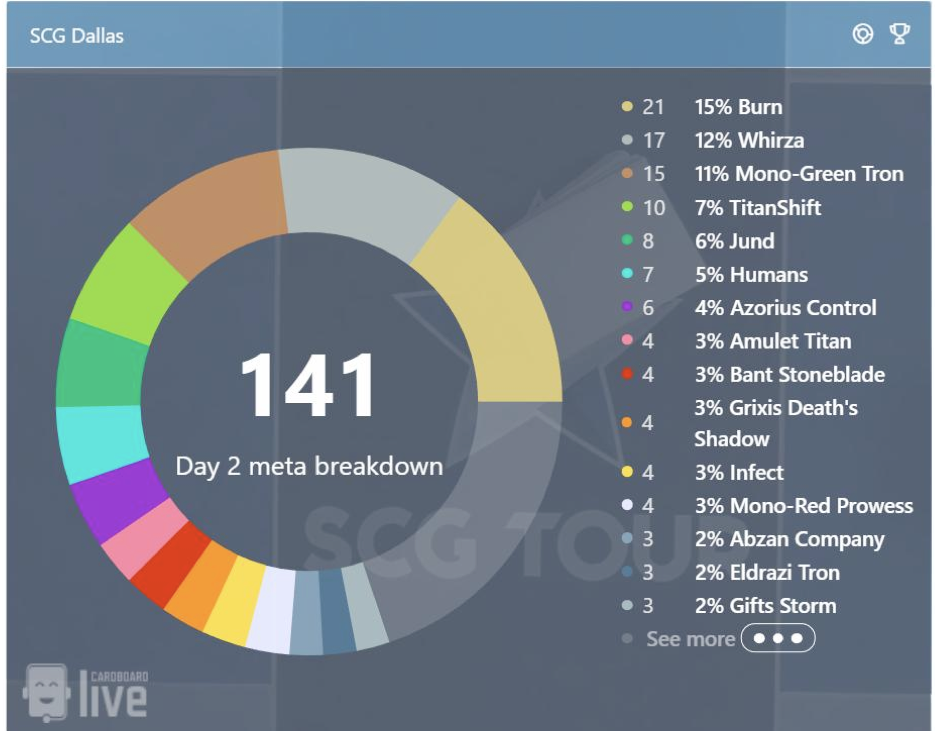 Azorius Control and Bant Stoneblade were the top representatives of Stoneforge decks, and yet still amounted to 10 out of the top 113 players with 18 points or better after Day 1 (not counting decks with less than 3 appearances), or just about 9% of the field when Burn alone makes 18.5% of that group! Quite the drop from the MTGO league results, which should not be taken as the gospel anyway. But that's a conversation for another day.

To give a complete picture of the event, 4-color Whirza and Harlan Firer won in a lightning fast Finals totalling less than 2 minutes of actual gameplay. As a side note, I believe this was Firer’s fifth top 8 with the deck. In other words he has not missed a single SCG Modern top 8 since Modern Horizons became legal!

This shows us that the departure of Hogaak, Arisen Necropolis leaves room at the top of the metagame for strategies that had been suppressed (Burn, Death’s Shadow), but also for the decks that benefit the most from the London Mulligan (Whirza, Tron). Then again, it is only Week 1 of the “new format”, and two more Modern MagicFest are on the horizon: Team Modern @ MF Indianapolis this weekend (Sep. 6-8) and Team Modern @ MF Ghent the week after (Sep. 13-15). There will also be two more SCG Modern Opens next month (Indianapolis Oct. 11-13, Atlanta Oct. 25-27). Hopefully we will get some coverage from CFB for the tabletop side to get a complete set of data to digest.

On the MTGO front, this weekend also featured a Modern MCQ and a Modern Challenge, which were won by TitanShift and Grixis Death’s Shadow respectively. Below are the top ranked finishers:

The Death's Shadow list that took 2nd had three copies of Jace, Vryn’s Prodigy, and the AmuletTitan in the top 8 of the Challenge also included Karn, the Great Creator as a 3-of. This is as varied a field as we have seen in a while, so let’s try and enjoy it while brewers figure out a way to push Stoneforge back to the front of the pack.

BONUS ROUND - Swords for Everyone!

As mentioned, here is a quick recap of which Swords were the most used over all events I mentioned above. Not to sound too clickbaity, but number 3 will surprise you!!

Moving away from a solved format is always intriguing, and the first post-B&R Modern tournaments did not disappoint. With Hogaak, Arisen Necropolis gone, we are finally going to have time to properly assess the pros and cons of the London Mulligan: decks like Whirza and Tron benefit greatly from it, but so far other established strategies like TitanShift, Burn, Humans and Jund have been able to hold their ground. There are still Modern events happening before New Standard season kicks in, so join me next time to see if and how the metagame will have changed! 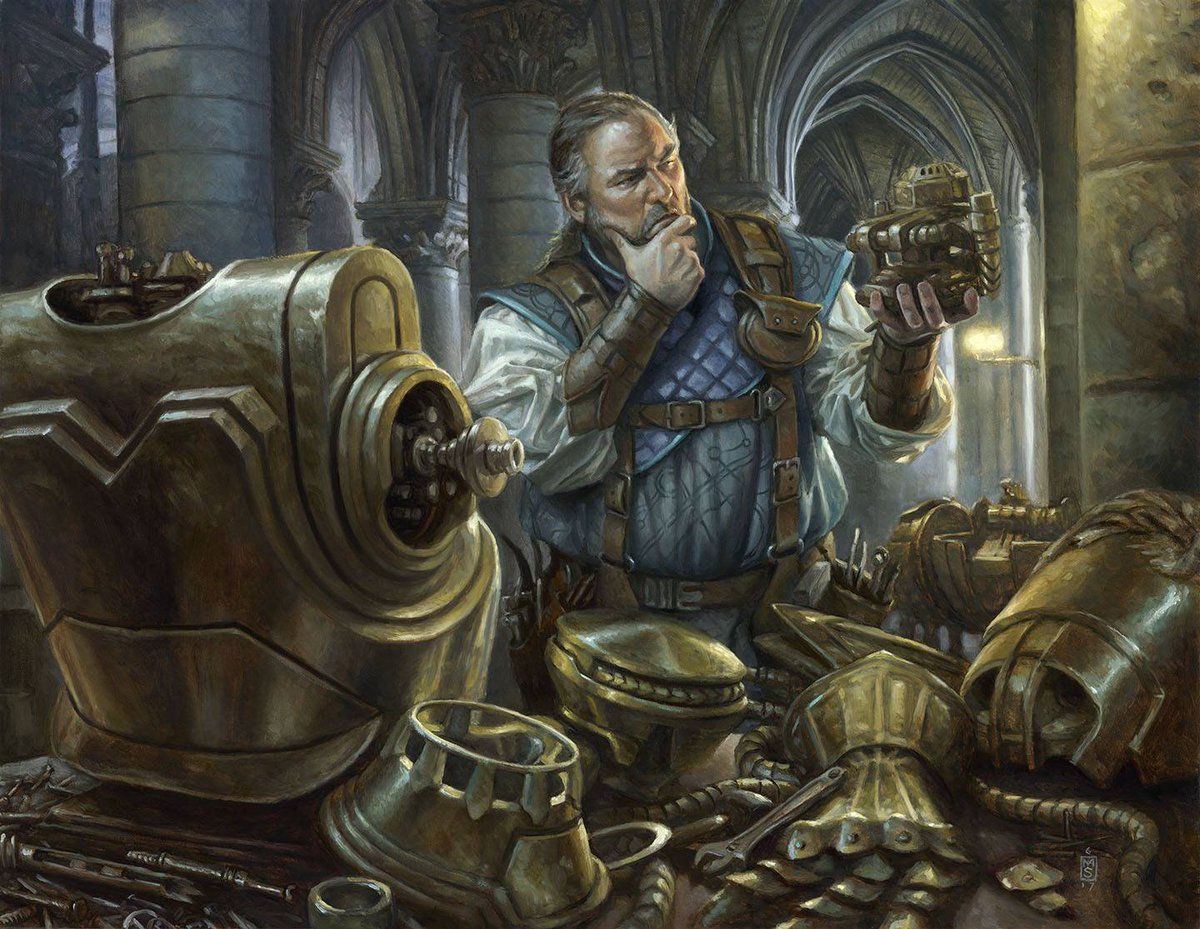 James Paterson discusses his design guidelines for making a “board game” cube, a unique play experience that prioritizes accessibility and flavor as much as it does gameplay. 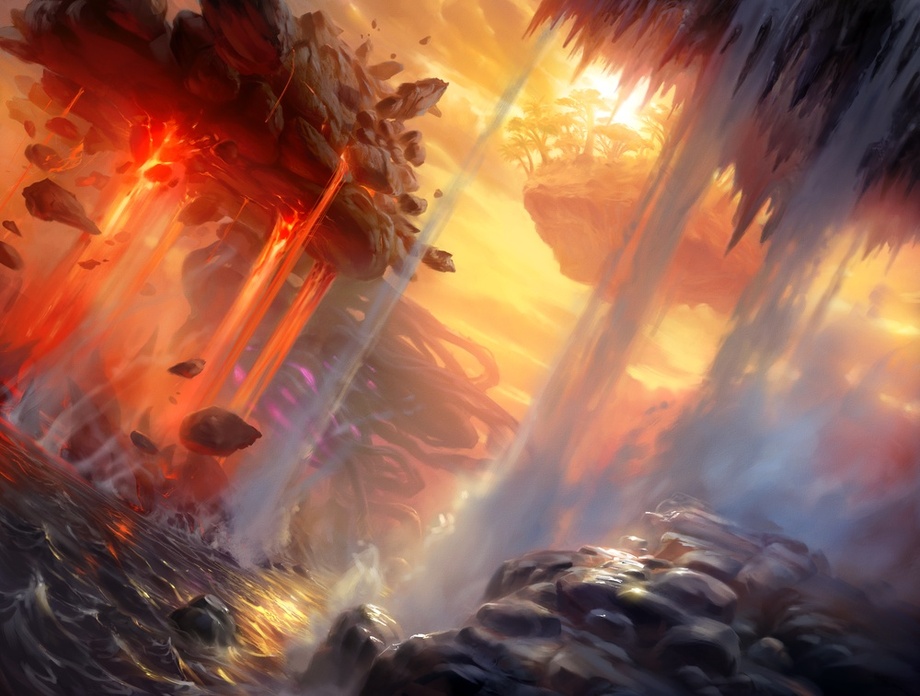 The Eternalist steps ups with a whole bunch of deck lists this month, as we ease out of summer. How has the meta reacted to all the big cards released recently?