Once upon a time, a brand new Standard season started as the latest expansion set was released. It brought in a lot of new fancy toys for Modern as well, some more obvious than others. But how much has the format been truly impacted by Throne of Eldraine? This is what I decided to look into, parsing through all MTGO lists of 5-0 decks and Modern Challenges Top32's published between 9/29 and 10/8, plus the Top16 decks of the SCG Classic in Philadelphia that took place on 10/6 - that is a total of 280 decks. Let's dig in!

What the Data Shows

The 280 decks I looked at are divided as follows: 3 Modern Leagues (200 decks), 2 Challenges (64 decks), 1 Classic (16 decks). There are 123 different archetypes represented, showcasing the diversity of the format - even when looking at the Top8 of the competitive events. The chart below gives the rankings of the archetypes that have at least 5 appearances across those 6 published events.

Unsurprisingly, this list follows the trends observed since the last B&R Update: Burn and Amulet Titan sit at the top, followed by the MonoGreen Tron which gained consistency thanks to the London Mulligan. One archetype has been shooting up through the ranks though: Urza Paradoxical Outcome, which appeared a total of 12 times if you include both the "classic" Outcome list and the Jeskai Ascendancy variant. And we have one card to thank for this: Emry, Lurker of the Loch.

Many players had the same reaction during spoiler season: "as if Urza, Lord High Artificer needed more tools". In most lists, Emry has taken the place of Goblin Engineer and can provide really explosive turns. It becomes even more ridiculous with a Jeskai Ascendancy on the board, since every artifact you cast will untap Emry and boost her, making it a frightening win condition.

Emry, Lurker of the Loch is not the only card that broke into the Modern scene right away; here are the numbers for the top 15 Throne of Eldraine cards that have seen Modern play online since 9/29:

Again, not a shocker: Once Upon a Time was instantly labeled as a Modern card before it was even thought about for Standard. Its usage ratio of 3.66 (total cards in the 75 per deck) shows that it is pretty much always a 4-of in the builds that use it. Same with Emry, Lurker of the Loch with an even larger ratio of 3.71. As for the archetypes that benefit the most from Once Upon a Time, once again the data shows that it is largely what was anticipated: Primeval Titan decks (both Amulet of Vigor and Scapeshift versions), Neoform combo, and Saheeli Rai/Kiki-Jiki, Mirror Breaker/Prime Speaker Vannifar "Pod" builds - each of them archetypes that could use the consistency that Once Upon a Time provides in terms of finding the land(s) and/or creature you need when you need it.

Merchant of the Vale is another card that felt like it would be an auto-include, this time in Dredge being the heir apparent to the now departed Faithless Looting. The possibility of a repeatable half-Looting is surely enticing enough, but even the Adventure part of the card, Haggle, is a good turn 1 play. And indeed it is, listed as a 3-of in the most recent iterations of the deck. For that reason, I would keep an eye on online stocks of the storybook version of the card, currently sitting below $3.

Mystical Dispute is an interesting card to see so high in the rankings, as it only ever appears in sideboards, most likely as an answer to Control deck. Acting as a supercharged Spell Pierce, it also targets creature spells like Snapcaster Mage or Vendilion Clique or Planeswalkers like Teferi, Time Raveler, Jace, the Mind Sculptor, or even Ashiok, Dream Render which started appearing in the 75 of more and more lists across the format.

Another card with a very high usage ratio is Charming Prince, which appears in two types of decks: MonoWhite Taxes, and, believe it or not, Dubious Challenge - albeit that particular combo deck only showed up once over the 280 lists I looked at.

The Return of Old Friends

I am now going to spend a little time digging deeper into the data. See, as I indicated in my previous article, the publication of the Modern 5-0 lists is a skewed data point since they are curated specifically to provide a wide range of archetypes. Not that it is not true that the format is diverse, but it is difficult to draw conclusions as to which builds are the most successful when the data that is shared is purposefully filtered.

But there is a better way to refine our analysis, and it is a rather simple one: the MTGO Modern League trophy leaderboard. By looking at the usernames that have the most trophies (i.e. that manage to 5-0 very often), I can cross-reference these names with the ones published in the Modern League results. Here are the top 10 players on that leaderboard as of October 11, 12pm and what they are most known for playing:

Before I go further, a little disclaimer: I am of course taking into account the fact that some players/teams like to drop out of a league when they sit at 4-0 to hide their list rather than get the trophy. However, I can only use what is public information, so I try to do the most with what is accessible. With that said, out of the rankings above there is one archetype that jumped out at me: Grixis Control. The player known as aspiringspike also happens to stream his gameplay on Twitch (https://www.twitch.tv/aspiringspike), and I managed to grab his most recent list:

There are two cards that instantly jump out: Drown in the Loch and Into the Story. The former is a formidable versatile tool in Eternal formats, and the latter simply reads "draw 4 for 2UU at instant speed". Having watched some gameplay, an end-of-turn Snapcaster Mage or even Torrential Gearhulk casting Into the Storywas just a beating for the opponent. Notice also the inclusion of Mystic Sanctuary, a very potent card in Modern that has also already inspired the revival of the UW Miracles archetype. The ship might have already sailed on foil copies of Sanctuary thanks to Pauper, but you can still find foil Into the Story for cheap. Drown in the Loch is a little out there already, hovering over $6 per foil copy.

After watching a few of the leagues aspiringspike ran on Twitch (I counted at least 4 trophies with it out of the 8 he is listed as having in the Leaderboard), the deck feels very strong and can hold its ground even against Burn and UW Control. As with many builds, the Tron matchup is a bit problematic though, and with this archetype still being predominant in metagame, it could limit the chances of seeing it played in tabletop this coming weekend at SCG Indianapolis for the Modern Open. I am hopeful to see Grixis Control featured during coverage which would help boost its popularity for sure.

As for the other deck that aspiringspike 5-0'ed with, UR Delver, the main change brought by Throne of Eldraine is the interaction between Deprive and Mystic Sanctuary, removing the downside of the counterspell and allowing for a pseudo-lock. Alternatively, Mystic Sanctuary being an Island nearly guarantees your Delver to flip, using a fetchland to make sure that a spell is sitting on the top of the library during your upkeep.

In case you missed it, WotC announced that the next B&R Update was moved to October 21st, the Monday after Mythic Championship V on Arena, and about two weeks before the next tabletop Mythic Championship (VI, in Richmond). While most are anticipating either no changes or Standard-focused bannings (*waves at Field of the Dead*), some rumblings have emerged calling for a Mox Opal ban in the face of the Urza Outcome deck mentioned earlier. If it does happen, it would mark the second major shakeup of the format in the past 6 months, and I am not sure whether WotC is willing to set that precedent.

In other news, during the latest Weekly MTG stream, a new product was announced, Mystery Booster:

And that is as much as we know right now about it, just the packaging. Speculations have already flooded social media platforms, with the obvious expectation being that it is a round-about way of making a new Masters set. We will be learning more during the exclusive sealed events during MagicFest Richmond and PAX Unplugged in Philadelphia.

We are still very early in the lifetime of Throne of Eldraine additions to Modern; with an SCG Modern Open this weekend, I will for sure be looking for the latest innovations during coverage. And with potential (un)bannings and reprints around the corner, we could be in for more metagame changes in the very near future, which I will of course cover! 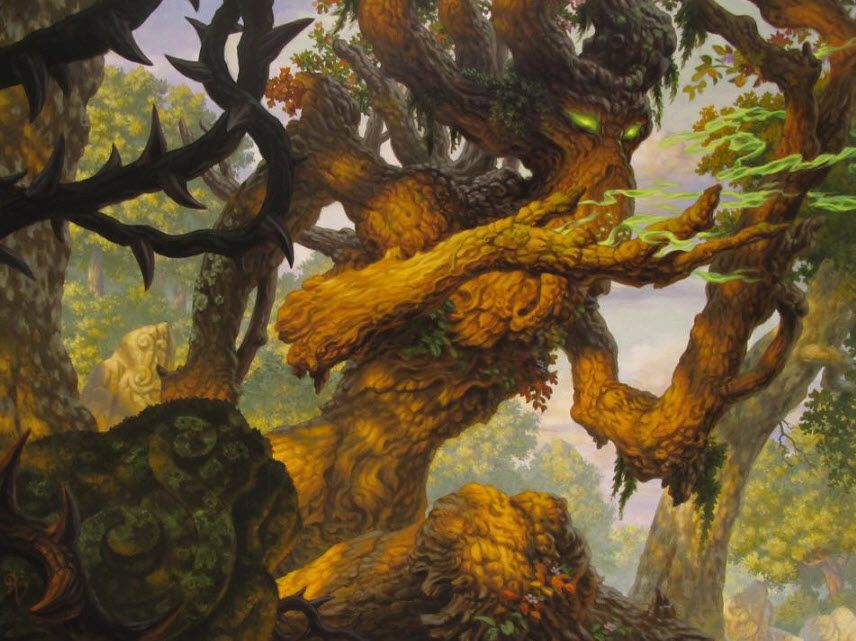 Darrin Keener talks turning a mana dork into a threat and examines the kinds of decks Faeburrow Elder's fixing may drive.

Lord Tupperware traps a board state under glass and breaks it down for you in this most recent edition of What's the Play?