Hello all you Ghouls and Geists! Zach and Ben of the Draft Chaff podcast here. While we like to think of ourselves as limited Chafficionados, we also know a thing or two about movies. We're going to run through some of our favorite cards from Midnight Hunt limited, plus our favorite frightful films/selected spooky shows they best embody!

The Recommendation: Train to Busan

These two make up the core of the blue-black zombies deck, but are perfectly serviceable in any black deck. In a fantastic marriage of flavor and function, the ability to flood the battlefield with the undead is a strong gameplan, and Diregraf Horde provides three zombies and an often-relevant exile ability. There are some great ways to make use of these tokens, such as using them to tap down your opponent's threats with Skaab Wrangler or draw cards with Morbid Opportunist, but the top payoff at common is Siege Zombie. This card is solid on turn two and sometimes exactly what you need on turn 10, making it a premiere way for black decks to end the game.

Speaking of the undead hordes, our pick for a zombie movie to check out is Train to Busan. There are plenty of great zombie films out there, ranging from pure horror to pure comedy, but this one has a little bit of everything. Add in some clever worldbuilding, memorable characters, and a lot of zombies, and you get something pretty special. We promise it’ll have your entire Halloween party hooked and on the edge of their seats, if not jumping clean out of them!

The Recommendation: The Haunting of Hill House

After a poor showing in AFR limited, blue is back with a vengeance in Midnight Hunt. Blue has some of the best creatures and interaction in the format, thanks to the card advantage intrinsic to Disturb and the value added by the zombies tacked onto the usual counters and tricks. Nebelgast Intruder can lead to some absolute blow-outs, and it pairs well with the other strong 3-4 mana instant speed effects in blue, such as Revenge of the Drowned and Flip the Switch. If your opponent is rightfully afraid of the ghost, they are forced to play around it, and possibly right into one of your other cards. Baithook Angler has been an extreme overperformer- both halves are alright, but the fact that this trades well and then returns later as a pesky flier has proven to be exactly what the blue decks want. The back half is a spirit, it’s a great card great to self-mill, and it’s mana-efficient overall.

If spirits and ghosts are your thing, we have to recommend The Haunting of Hill House. Most horror media tend to center, well, the horror, but we would argue that this show is actually about a family. The horror drives the conflict, but the relationships between characters are the real emotional core of the show, and give it weight that other similar shows lack. The Haunting of Hill House features one of the most memorable spirits in recent memory, and the more you learn about the House, the more you'll want to know. Keep an eye out for ghosts hidden in the background- according to diehard fans, there are at least 40.

Lunarch Veteran is probably the card we’ve raised the most in our personal rankings of commons. Admittedly, we barely gave this a glance in our set review, as these types of cards tend to be fine in lifegain vectors (clearly absent from this set) and unplayable everywhere else. One thing we did not know during our first look at the set was that, as Ben put it:

Let’s use some extreme case analysis. If your life total is 100, how many decayed zombies would your opponent need before you felt threatened? 5? 10? 20? It’s probably a lot. Now, imagine your life total is 2. At such low life, every zombie token your opponent creates is a game-ending threat. Zombie tokens are clearly much more powerful when the game ends before their decayed triggers can go on the stack, making incidental lifegain from Lunarch Veteran a great way of winning a tight race or stabilizing your board. Add on the upside of Disturb and you have a solid common. Dawnhart Wardens also excels against zombies- the 3/3 body and vigilance functionally negates a handful of zombie tokens across the table. Coven is relatively easy to turn on, and giving your team of small fliers and efficient ground creatures +1/+0 ensures that the game ends before decks like blue-black can make use of their card advantage.

It’s difficult to look at cards like Dawnhart Wardens, Join the Dance, or Sunset Revelry without thinking of Midsommar. One word that sums this movie up would be striking. The visuals are beautiful but untrustworthy, perfectly mirroring the cultists featured in the movie. Director Ari Aster is a master of dread- rather than creating horror through jumpscares, he shows you exactly what is about to happen, and does so with such finesse that it’ll make your stomach turn anyway. This one is not for the faint of heart!

The Recommendation: Over the Garden Wall

This is what we would call a fast format (as has been the trend among the last few sets). This means that you should try to impact the board no later than turn 2 or 3, but it doesn’t mean that late-game decks are unplayable. Blue-green has shown to be able to leverage self-mill in conjunction with flashback and disturb to great effect in the long games. Shadowbeast Sighting joins a long line of solid green 4-drops that functionally draw you a card, such as Voracious Typhon and Sarulf’s Packmate. Rootcoil Creeper does a bit of everything: it buys back one of your spent flashback spells, accelerates your mana, and allows for splashes (often into red, but sometimes black and white as well).

These cards remind us of a show called Over the Garden Wall. The tree-like, stalking creatures mirror the fantastic character known as the Beast, AKA the Death of Hope, AKA He Who Haunts the Woods. This may sound intimidating, but to be honest, this Emmy-award winning miniseries is about the exact opposite of the horrific content previously mentioned. Dancing frogs, pumpkin people, and the occasional musical number balance out the fear of the Unknown. Over the Garden Wall feels like watching fall incarnate, and gets better with each repeat viewing (as Ben can confirm- he adores this show  and has seen it 5+ times).

The Cards: Ardent Elementalist and Seize the Storm

Red has been a tricky color to navigate in Midnight Hunt. The werewolf decks tend to get out-card-advantaged by blue decks and outraced by white decks. Red-black can come together, but it is often more of a value pile than a synergistic vampire deck. I have found success in the red spells package, using cards like Festival Crasher and Spellrune Painter to force through damage and cards like those featured above to close out the game. This pairs fairly well with any color but green- ironically, many of the common and uncommon werewolves tend to be some of the slower, clunkier cards in the format.

We thought we’d finish off our recommendations with a classic. Whether you haven’t seen it before or you haven’t seen it in a while, Ghostbusters is a staple of 80s cinema and Halloween movie marathons alike. The art of Seize the Storm looks like it could be a still from the upcoming sequel/reboot. The mad mages of Innistrad might prefer to seize the power of geists rather than bust them, but we’re pretty sure the comparison holds.

We over at the Draft Chaff podcast are loving the gameplay of Midnight Hunt, and can’t wait to do it all again with the next Innistrad set coming up in a few months. If you’d like to join us, feel free to check out our podcast or Discord. Happy Halloween and Happy Haunting!

Andy Zupke talks about which cards are great in the 99 for five new Commanders introduced in Innistrad: Midnight Hunt. 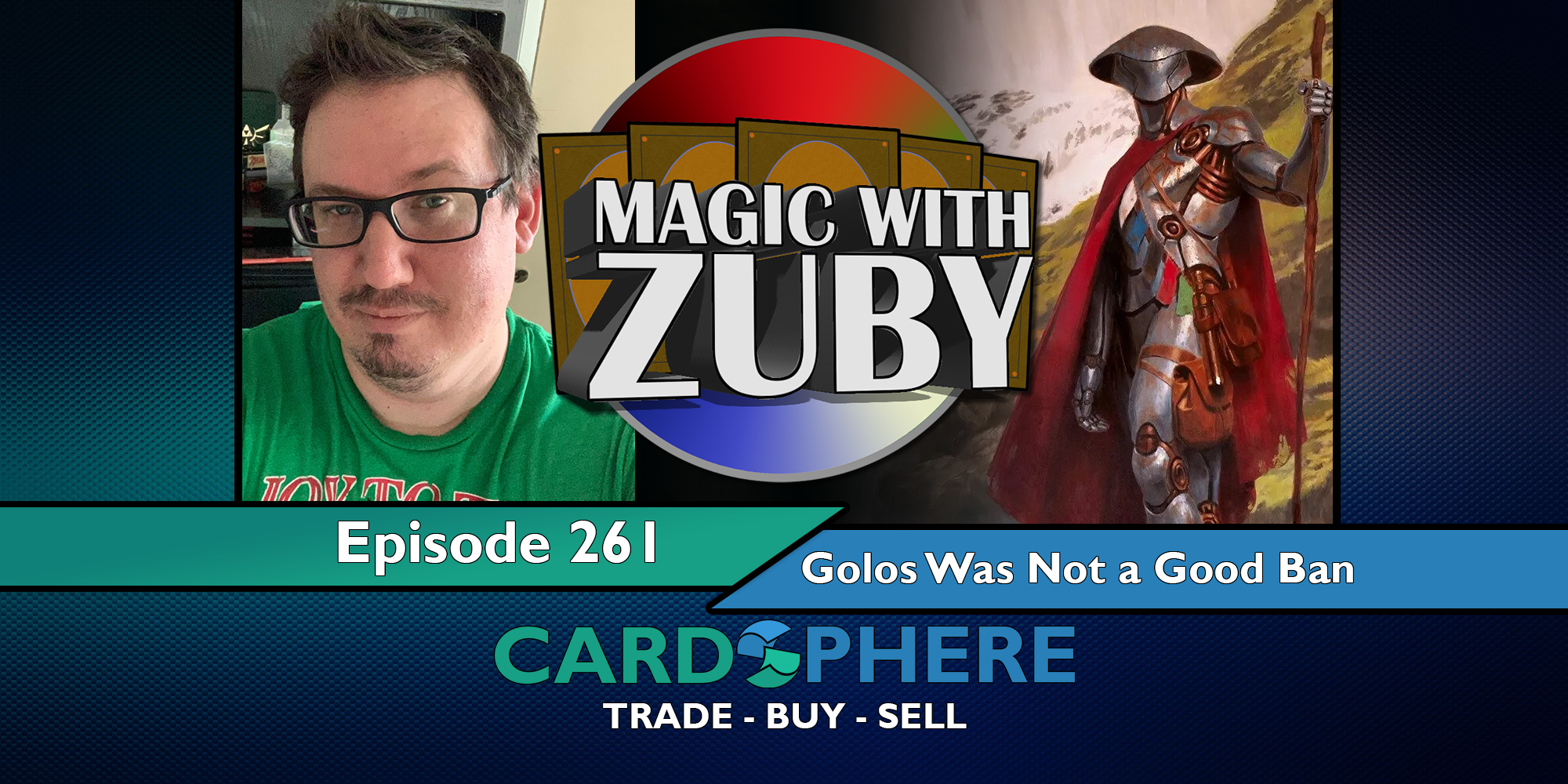 Magic with Zuby is back with a brand new edition. We are hitting it up a bit old school today with a solo episode and we discussed the recent bannings in EDH and the Magic Arena Matcherino debacle. We also dive in to some Dungeons and Dragons as well as some Final Fantasy XIV! It's great to be back!