Welcome back! I am so excited to be bringing you all another What's the Play situation this week. The plan for this series is to take a look at interesting turning points in games of limited and try to evaluate the best move. Last time, we looked at what some might have considered a fairly straightforward combat step and different decision trees for deciding to block (and, if so, how to block) or not to block. I'm still not 100% confident my decision was correct, but I was happy to have the chance to puzzle it out with you. This week's conundrum is trickier in the heat of the moment, but one I am much more confident in. Let's get in to it, shall we?

I am piloting a grindy and powerful Green Black Control Deck, one of my favorite deck styles to play in this format. Trading one-for-one with the opponent and reaping the benefit of your deck's two-for-ones in cards like Gravedigger and Macabre Waltz (Vivien Reid and Liliana's Contract aren't too shabby either.) It is game three of match three, and I'm 1-1 in matches (this was in the Intermediate Queues where, if I’m 1-1, I call match three "The Pleb Finals.") So it all comes down to this. My opponent is on a Blue Green good stuff deck. They've got a Skyrider Patrol, Skilled Animator with a few artifacts, some beef from Green, and some flyers from Blue (I've sided in a plummet to combat the latter.) This game has been a slug fest. My opponent already wrathed my board with Declare Dominance, but I was able to rebuild with the help of Macabre Waltz and Gravedigger and a resilient Reassembling Skeleton. 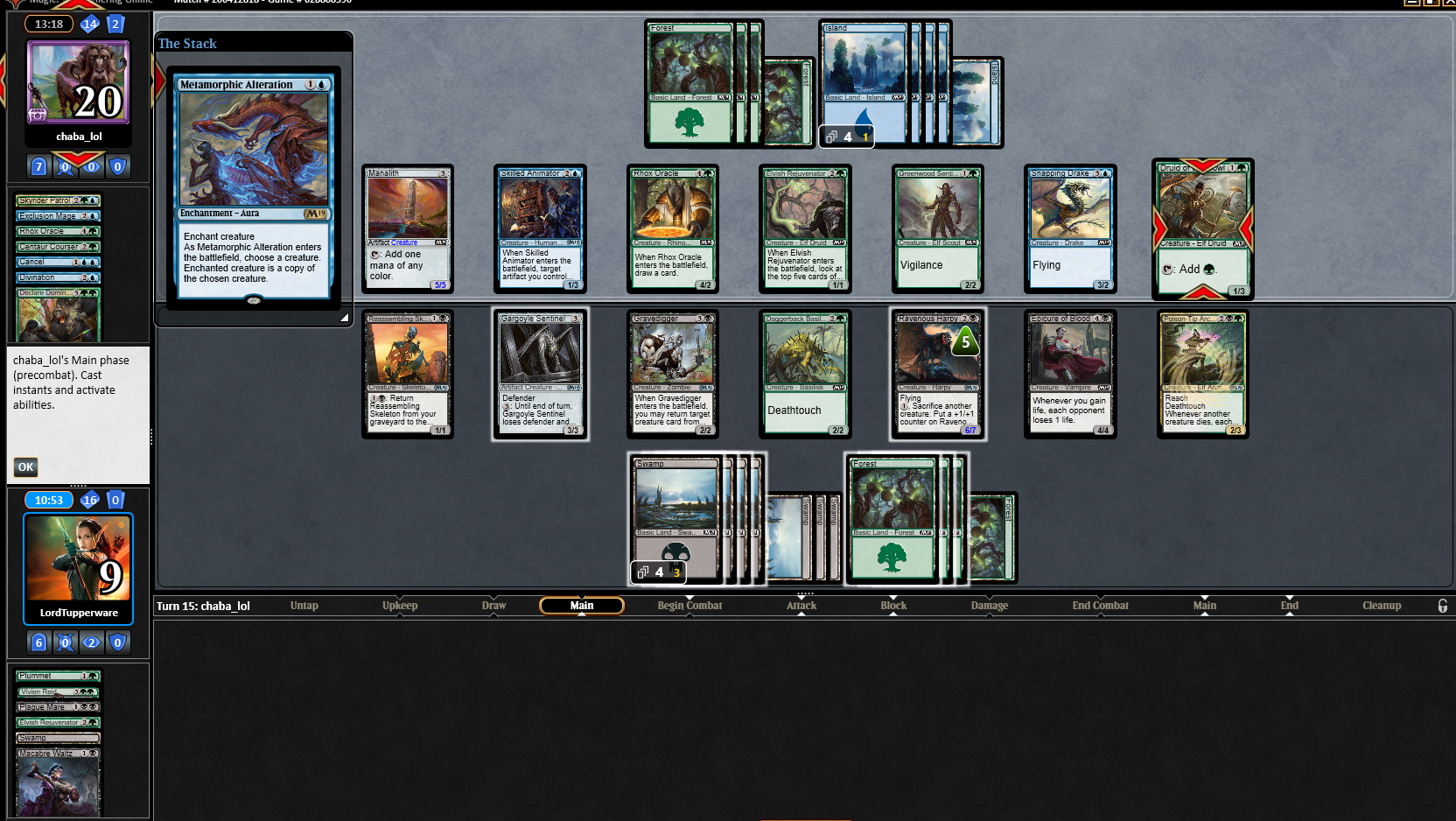 After the dust has settled from the Declare Dominance, you were able to recur a number of creatures from your graveyard, and now you’ve assembled one of my favorite combos. First you had Reassembling Skeleton and Ravenous Harpy to be able to pay three mana to put a +1/+1 counter on the Harpy. The real icing on the cake was when, two turns ago, you drew Poison-Tip Archer, which turned your two card combo into a three card killing machine. Every activation of the Harpy is now one damage dealt to your opponent. You’ve gone from feeling there was no way you could win when you saw your entire board wiped to seeing victory just a few turns ahead. As this combo is quite mana hungry, you’ve been playing out your lands, so you find yourself hellbent. Your opponent untaps and casts a Metamorphic Alteration on their Druid of the Cowl.

"What do you mean 'What's the play?' Ethan? There's nothing to decide, you've got no cards in hand, what are you supposed to do in response to this spell?" Obviously, I'm giving a bit of the game away having us all focus on this screenshot. It's like those "Find the Hidden Objects" from Highlights Magazine: you know there's something to see in this picture, so you can take all the time you need to find it. But in the heat of the game, I bet a lot of folks would pass priority right through this, not giving a thought to this spell resolving. Many times in my magic career, I've clicked through crucial moments like this, only seconds later realizing what a fatal mistake I made. Have you found it yet?

What is your opponent going to choose to copy with Metamorphic Alteration? There aren't that many options. Of the creatures on their side, they've got a number with enter-the-battlefield effects, which don't make for particularly exciting targets. Otherwise they could copy their Snapping Drake to present another flying threat, but that seems unlikely. They're probably going to go for one of your creatures. Epicure of Blood would be a possible candidate if they had any lifegain, but that's not a theme of Green or Blue. They could copy the Harpy, though they're probably not excited to start sacrificing their creatures. Their plan is almost certainly to copy Poison-Tip Archer. And if they do, it's game over.

Your life total isn’t incredibly low at 9, but it’s significantly lower than your opponent’s 20. Once they have a copy of Poisin-Tip archer on their side of the battlefield, you can’t keep sacrificing Reassembling Skeleton, because not only will that be a damage dealt to your opponent, but a damage dealt to you. Your combo will be obsolete, and you’ll have to topdeck a different way to win, and you don’t have many. This Harpy is just about all you have left as a means to push through this board stall. Thankfully, even though you have no cards in hand, you do have a way to interact with this spell. You can think one step ahead and anticipate that your opponent will choose to copy your Archer and sacrifice it instead, giving them far inferior targets to copy and leaving you still with the win condition of growing the Harpy large enough to turn it into a one-card chumping machine.

I have enough mana to do the Skeleton Sacrifice and rebuy two more times before I have to sacrifice the Poison-Tip Archer. My opponent chooses to copy the Ravenous Harpy instead. I spend a couple turns growing my own Harpy, until I draw an Abnormal Endurance. I target my Gravedigger with it, sacrifice it to the Harpy, get the ETB effect to return my archer from the graveyard to my hand, and I get the combo going again for the win. Such a satisfying end to a very complicated game. This is why I love these decks! 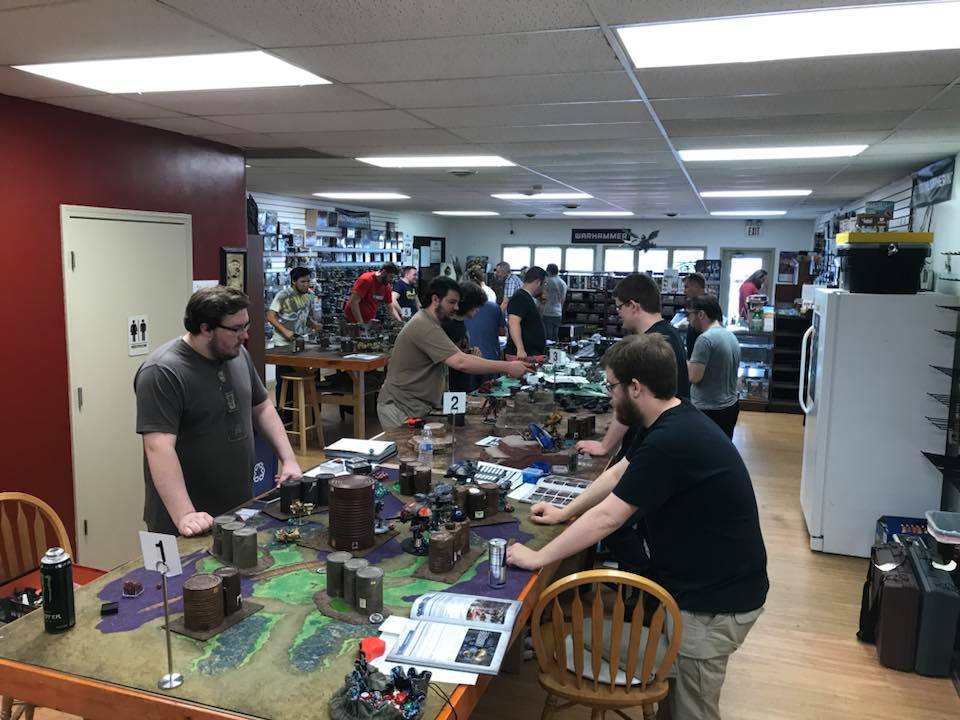 Our first look at an LGS that uses Cardsphere. Meet The Geekery, out of Shawnee, Kansas. 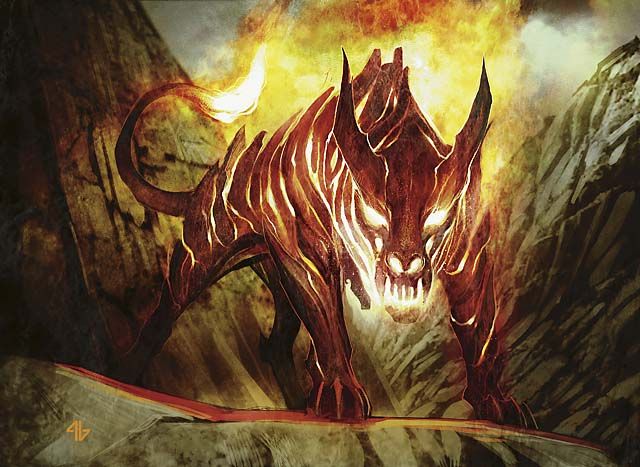 Kicking off his new regular column, Andrew from Tier Fun takes a look at some spicey Modern lists.