Every single person who plays Magic: the Gathering has a preference for the kind of deck they’d like to play. Some folks like midrange while others like combo. Some prefer Mono Red Burn while others want nothing more than to start the game with a forest and a copy of Llanowar Elves. Some prefer aggressive decks while others want to take control of the game until the one thing left to do is infinitely tuck their own Teferi, Hero of Dominaria until their opponent decides to quit the game forever.

And me? I love drafting 5 color decks in limited.

I credit my love for these kinds of decks to my love of cube. One of the biggest level-up moments in my magic career was realizing that fetchlands and dual lands were high picks in cube draft. Drafting a strong mana base lets you play the most powerful cards you see, lets you play more of your draft picks, and gives your deck more consistency overall. When regular limited environments offer the ability to draft 5 color decks, I jump at the opportunity. War of the Spark doesn’t quite get there on mana fixing with lands alone as Gateway Plaza and Interplanar Beacon (only on rare occasions) are your only options. There are, however, a handful of artifacts and quite a few spells in green. Combining these allows you to build very strong mana bases and splash for all of the powerful cards that exist at rare, uncommon, and even common in this set.

A Note on Mana Bases

There is a reason that I love talking about building 3-5 color decks in most limited formats: it’s very difficult! Too often I see folks posting attempts at decks like these on twitter or in the Lords of Limited Discord and there is clearly a disconnect on what a functional limited mana base looks like. You have to remember that, at your core, you are a two color deck. And your mana base should reflect that. It’s optimal for your mana to offer 8-9 sources of each of your two main colors. And please don’t make the mistake of playing two non-green colors as your main deck and then splashing green for fixing. That is a recipe for a disaster. All right, onto the specifics for WAR.

What is it good for? Absolutely EVERYTHING!

The make-up of the multi-color deck in each limited format is roughly the same. Whether we’re talking about the Oasis Ritualist deck from Hour of Devastation, the Gates deck from Guilds of Ravnica, or the Green Greed deck in War of the Spark, the ingredients are the same. Firstly, you need bombs. These cards are the reason to stretch your mana and take on the risk of playing three, four, or five colors. You then need fixing to support this greed. You also need removal and a good curve (also known as defensive speed) to interact favorably with your opponent in the early part of the game while you set up your deck for the late game. You also need card advantage and or places to put mana to ensure that you don’t flood out. Since so many of the slots for spells are going to be devoted to cards that create mana, it’s important to have spells that make up for that inherent card disadvantage.

There are two reasons that this deck is so viable in War of the Spark in particular. The first is the abundance of fixing, which we’ll get to in just a bit. The second is that there are so many powerful cards in this format. If a clear two color lane doesn’t present itself to me, I’ll just start snapping up all the fixing I can get my hands on so that I can play all the powerful cards I open or get passed. Premium removal at common like Ob Nixilis’s Cruelty and Jaya’s Greeting, almost all of the uncommon planeswalkers, and most rares are cards I’m actively looking for in these decks.

Let’s take a look at all the ways there are to fix mana in this format and what their roles are.

Gateway Plaza - I love grabbing one of these at some point in the draft and depending how deep my splashes go, I might play two. The cost of an ETB tapped land is quite real though, so be aware of the tempo-negative effect that can have.

Interplanar Beacon - I have only played this card once in 70 drafts and it was to enable casting Nicol Bolas. It’s not unplayable, but more often than not, it’s better to have a basic land in its place.

Guild Globe - This card has such a low impact on your deck for such a high upside. The fact that it’s something to do on turn 2 and it replaces itself makes it a strong include in your deck. However, it only fixes for your splash once, so you can’t rely on it too heavily.

Mana Geode - It turns out that Manalith with Scry 1 is a pretty good card. The scry on this is super relevant as it feels like half a card tacked on to an effect you’re activaly looking for. I don’t want a ton of these, but I’ll usually play at least one in these decks.

Firemind Vessel - I am not a fan of this card. By the time I get to four mana in these decks I want to be impacting the board with one of my B level or Bomb tier cards. I would put this in the same category as Interplanar Beacon: I’m sure there are decks where this card is good, but they’re going to be incredibly rare.

Prismite - This card is quite fragile and has a very low impact on the game. I would hope to not play this card at all.

Paradise Druid - This is probably the best piece of fixing in the format. A two drop creature that your opponent can’t remove before you activate it that can add any color of mana? Sign me up.

New Horizons - This is an incredible reprint! Horizons fits so nicely in this set. Not only does it provide the ability to double splash for cards like Sarkhan, the Masterless or God-Eternal Oketra, but it synergizes so well with the proliferate theme across all of green’s cards including its top commons in Pollenbright Druid and Bloom Hulk.

Centaur Nurturer - I was much more excited about this card at the start of the format than I am now. I’ll still play these, but I think this suffers from the same four mana problem that Firemind Vessel does. This has the added benefit of gaining a little life and providing some defensive speed, so it makes the cut more often than not.

Jiang Yanggu, Wildcrafter - If you have enough +1/+1 counters going on and enough two and three mana creatures, I’d accept this as a source of fixing in your deck, but it’s much less reliable than most others on this list.

Leyline Prowler - I believe the Green Greed deck in this format can be paired with any of the other four colors and succeed, but Black is the best of the bunch because of its two gold uncommons. Prowler not only helps fix your mana, but helps gain life and hold down the fort on the ground.

Deathsprout - This card is wild. The color requirements are high, but the effect is incredibly powerful. It’s important to note that because your spells are so often going to be what helps fix for your splashes, you may not otherwise want to play off-color basics. This card changes that, so adjust accordingly when building your deck.

I don’t think I need to spend a lot of time here telling you to prioritize removal. We all know that it’s important to be able to interact with what your opponent is doing, especially in this format with so many game-warping, impactful cards. Defensive speed is also crucial for these kinds of decks. Affecting the board early in a meaningful way is of the utmost importance. It’s often the difference between getting 1 or 2 activations out of an uncommon planeswalker which can yield a huge advantage, which depending on who’s in control of the board. Now, I’m not advocating for jamming any old two drop into your deck. But the best of the bunch including Lazotep Reaver, Pollenbright Druid, and Burning Prophet should be taken early and often. You want to be the first player on the board, but even more so in these kinds of decks which have a tendency to start from behind.

When you have to devote a number of slots in your deck for mana fixing and ramp, you can often find yourself in danger of flooding out in many games. That is why it is crucial to ensure you have places to put mana and ways to recoup your card disadvantage. Tamiyo’s Epiphany is one of my favorite splashes in these decks since it does such a good job of refilling your hand with action. A single copy each of Vivien’s Grizzly and/or Spark Reaper also do an excellent job at giving you a place to put all that extra mana and turn it into a card advantage engine. And hopefully some of the bombs that have made their way to your seat at the draft table can help in this department as well.

Being able to draft these kinds of decks is one of the most important weapons in any limited player’s arsenal. And piloting them is incredibly fun to boot! I don’t think this is a top tier deck in this format, I leave that to the three grixis color pairs. But I think it’s a solid option if you don’t find yourself with a clear direction in the first pack. Before I sign off I’ll leave you with a few images of some trophy decks I’ve had with some creative mana bases. I hope you’re having as much fun in this format as I am. And, as always, happy drafting! 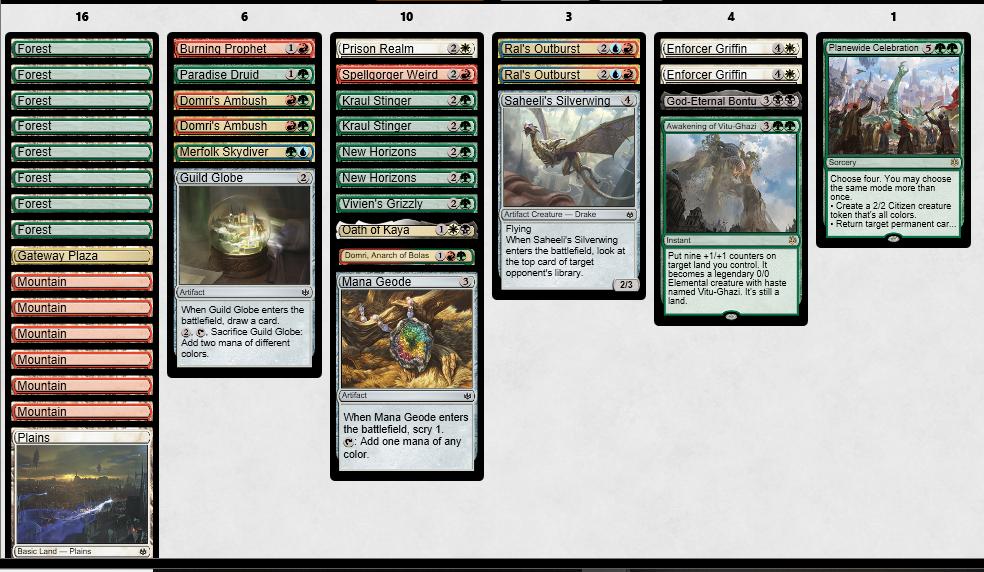 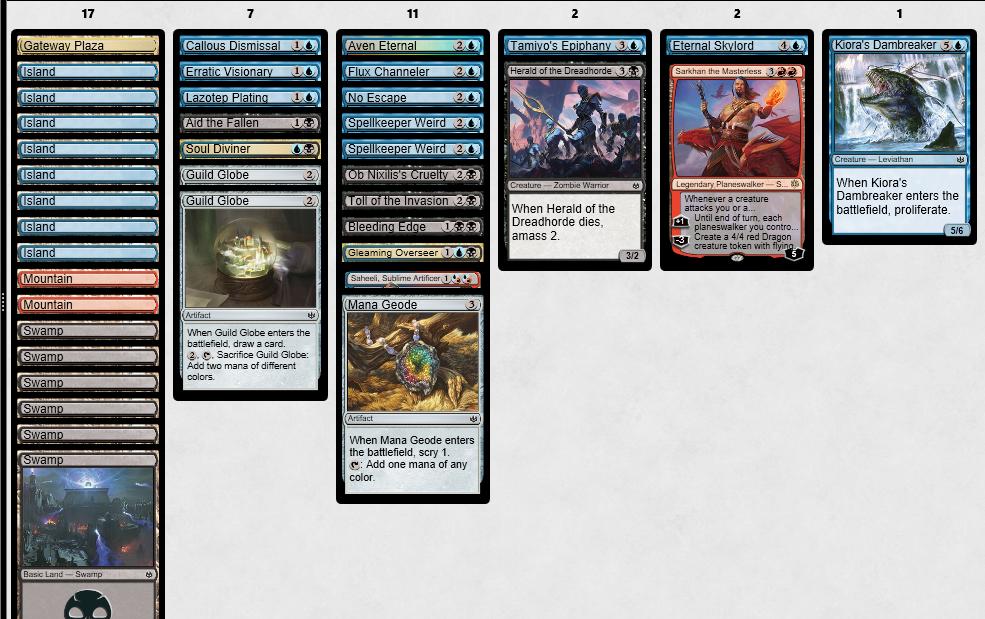 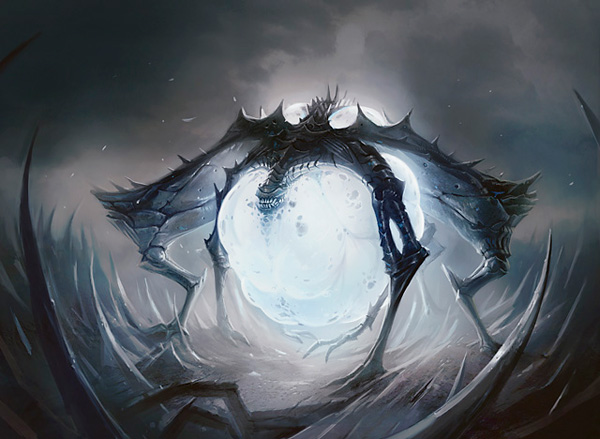 AlbyMTG joins us to talk about some top Modern decks, and how to find an arrow to shove in their heels.

Two decks lord over Pauper, with variants to those archetypes claiming top ranks, too. However, deck analysis seems premature prior to the May 20th Ban Announcement. How might expected sanctions tilt the format?