When you get to the end of a Standard format (as we are today), everyone pretty much knows what's coming the second you play your first land. If I'm sitting across from someone who plays an untapped turn 1 Overgrown Tomb into Llanowar Elves, I'm positive that I'm up against the best deck in the meta--Golgari Midrange. I know I'm going to get a lot of explore triggers, a few Wildgrowth Walkers that ends the game through lifegain, and a Carnage Tyrant to finish. But I've been having some success by using that familiarity to play some cards in a Golgari deck that are a bit out of favor, as well as using a simple two-card synergy that produces early-game consistency that helps you do broken things in the endgame. If the format is pretty well determined, we can regain some percentages of EV against our opponent if they aren't quite sure what we're playing. I stumbled across this list as a casual option, and after some tuning it turns out that it's quite fun to play. Without further ado:

The synergy that we're using involves Glowspore Shaman and Dryad Greenseeker, which work to ensure that we can access a land whenever we need it. The deck is a fairly all-in graveyard strategy that wants bunches of stuff in the yard so we can access what we need when we need it. However, one of the more painful things about graveyard decks is that you often see a land that you needed for your next land drop milled with no way to access it. When Glowspore Shaman mills three, it also allows you to take a land from the graveyard and put it on top of your deck. This isn't that great of an ability on its own since it's a late-game nonbo that most of the time you'd skip. However, Dryad Greenseeker (one of my most-played cards of Guilds Standard) can tap to let you look at the top card of your library and put it into your hand if it's a land. So by playing two decent-sized bodies (the Shaman for attacking, the Greenseeker for defending), we can put needed lands on top of our library and immediately draw them into our hand. This also lets us smooth late-game draws, as we can block with Shaman and then check our library on the endstep and draw a land so we can be more likely to draw action on our turn. 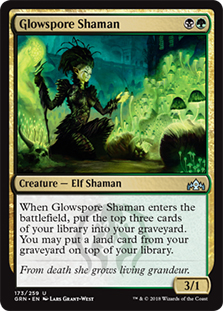 The majority of the deck wants to either exploit filling our graveyard, play threats that our opponent must answer, or hit our finishers. Stitcher's Supplier is easily the best graveyard-filler of the format and we're happy to have the playset. Plaguecrafter is a great way to keep the board clear early-on and works well with Supplier to have something we're happy to sacrifice. Isareth the Awakener is the wildcard of the deck. I've wanted to find a place for her since rotation, and this might be it (although for very different reasons than I had anticipated). Yes, Isareth gives us access to any creature in our graveyard when she attacks. But what I've found is that Isareth tends to make people freak out and remove her even when there are better targets. A 3/3 with deathtouch for 3 is a decent-enough deal. But...aggro decks don't want to face a bigger deathtouch blocker, and many other players don't want to try to figure out WHY we're playing her, so they just remove her immediately. And every removal spell we get out of the way early makes our late-game situation better.

We also play a couple of utility cards in the main deck: Thrashing Brontodon is a big butt for three mana that kills annoying artifacts and enchantments, and Find // Finality is useful both in the early game (to return creatures we need from the yard) and the late game (to sweep the board of everything except our biggest creature).

Most of our utility occurs at the four-drop spot. We'll quickly skip over Creeping Chill, since we almost never want to cast it for full cost from our hand. We're just hoping we mill one or two of them through the course of the game to get a couple of free opponent-directed Lightning Helix and provide a bit of margin. I'm always happy to play Chupes in any black deck, and Ravenous Chupacabra is a good addition for repeatable removal when needed. We have a single Vraska, Golgari Queen for early removal and card draw which doesn't hurt us as much as you'd think because of the GreenGlow ability to get lands back if needed. Golgari Findbroker gets back any of the pieces we need from our graveyard, and Phyrexian Scriptures is a house in this deck. Against any non-control matchup, we almost never care about board wipes since we can get creatures back easier than our opponent can, and there's enough graveyard mirrors out there that the one-sided graveyard nuking is a nice touch.

We have a virtual pu-pu platter of finishers, as each has a different best-case scenario and each can be good in certain board states. Journey to Eternity is fantastic in this deck. Regardless of which creature takes the Journey, it immediately creates a dilemma for the opponent. Almost every one of our creatures have an enter-the-battlefield effect which they don't want to give us for free.

Many of our creatures are three-power or more, so we often get 6-9 extra points of damage by beating down with the enchanted creature when our opponent is not willing to block. And if they do block, Atzal, Cave of Eternity is a finisher all by itself. Five mana to bring back whatever we need from the graveyard is tough to beat and creates tons of value. The Eldest Reborn keeps the board clear in the early game, and will eventually get us the best card in either graveyard to clean up. Underrealm Lich is probably the card I question most in the deck. Yes, if it resolves and we untap, it's crazy good. It lets us dig through our deck and throws the rest in the graveyard to be played later. But it's another one that is often not strong to reanimate and dies quickly to lots of common removal in the format. Izoni, Thousand-Eyed and Lotleth Giant are the true creature-based finishers that are fantastic with full graveyards: Izoni is the go-wide finisher that often means 5-8 bodies on the board when cast, and Lotleth is a one-shot finisher beyond its massive frame. 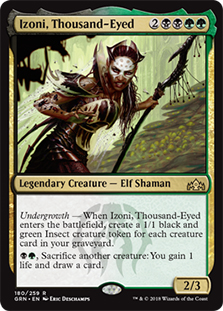 Because our graveyard strategy provides a lot of choice as to what we can get out of our graveyard, our sideboard is equally diverse. Necrotic Wound is very powerful late-game removal that takes care of a lot of indestructible and recursive threats. Pilfering Imp provides hand disruption (although I'm almost sure that this becomes Drill Bit after Allegiance is released). Extra copies of Plaguecrafter, Thrashing Brontodon, and The Eldest Reborn are always nice to have when we need them for artifact- and planeswalker-heavy matchups. Ritual of Soot and Golden Demise are great for go-wide strategies, and Field of Ruin and Sorcerous Spyglass are nice against control. We also run a couple of random copies of Assassin's Trophy for removal when we need it (although fair warning: you can't target your own creatures with it, so forget about using it to get that Journey to Eternity value).

In practice, Golgari GreenGlow's best feature (apart from being a curveball to the format) is it resilience. Its ability to find lands when needed and get back threats from the graveyard makes it a tough deck to overcome, even after missing an early land drop or a mulligan. It's especially good against one-creature decks like Izzet Drakes, since we're more than willing to trade one creature at a time with them, and we have lots of cards that can cause the opponent to sacrifice their creature (and nuke their graveyard for good measure). It's clear that control matchups can be a chore, yet we have enough threats balanced between creatures and spells that even there we're forcing our opponent to make tough sideboarding choices. If they go too much towards Essence Scatter to counter our creatures, the sagas can still do damage. It's a very grindy deck...you'd better be ready to play long, drawn-out games with lots of interaction and tough decisions. It's a lot of fun, and a good way to score some wins while waiting for prerelease. I'm excited to see where it can go with some new toys in the next set, so let me know where you'd make changes or additions.

Now go kick the rest of the day in the face for me. And as always: please drive friendly! 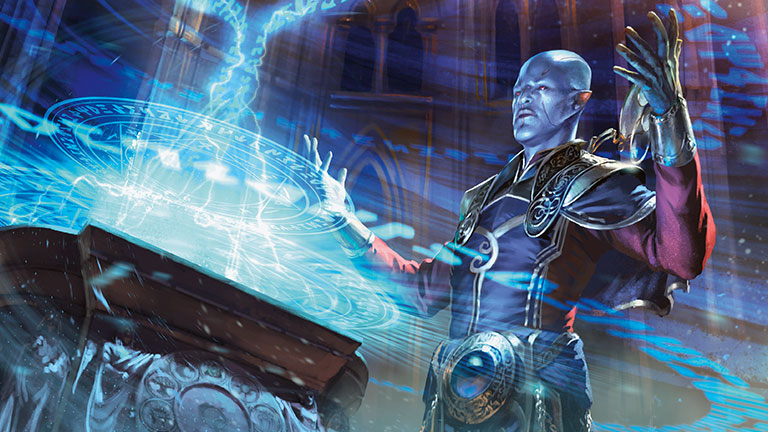 Quick picks for cards of interest from the Cardsphere team and community members. Special guests Matt Bodensteiner and AlbyMTG. 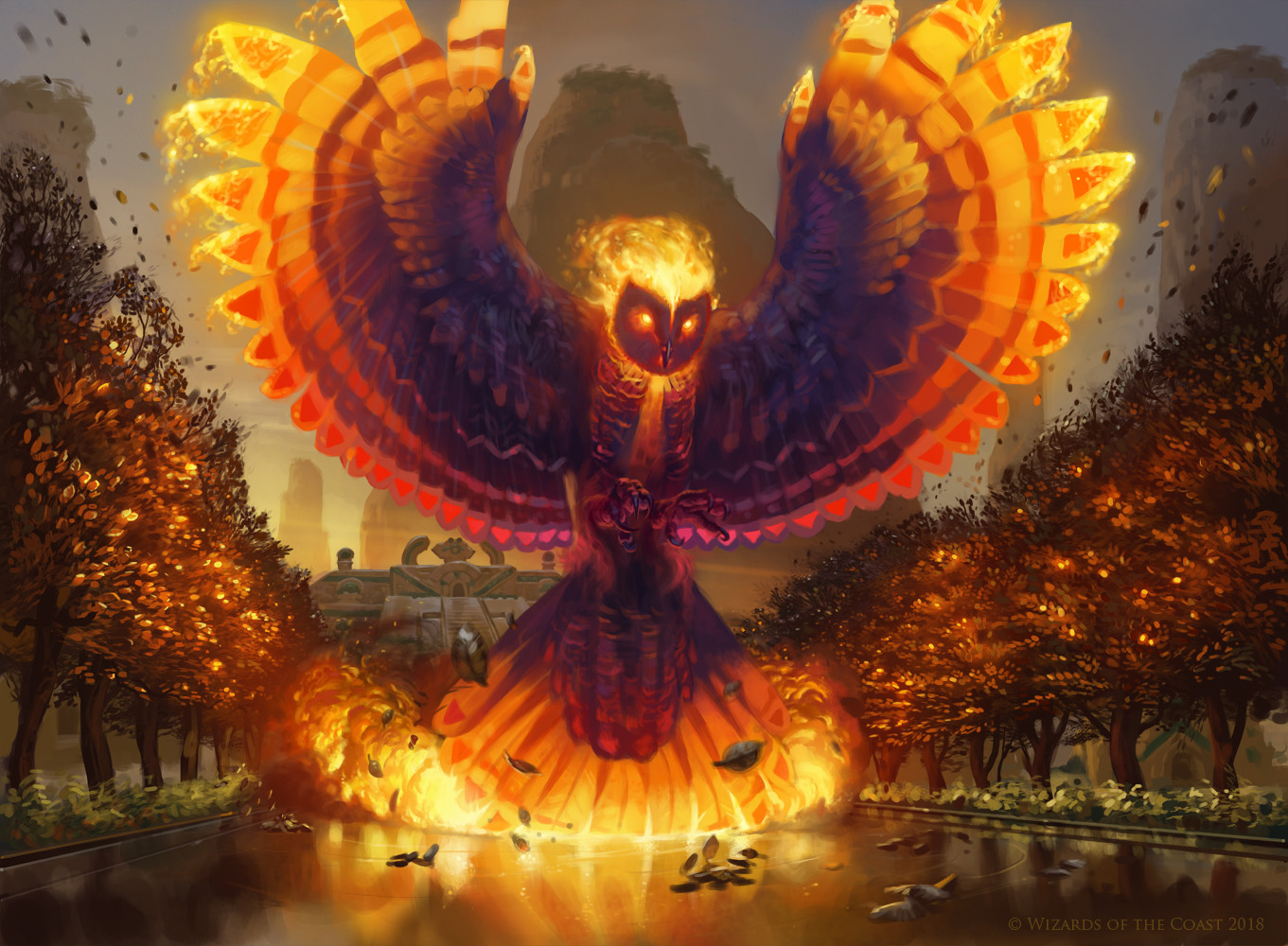 Ted Rodney introduces a new monthly column focused on Arena weekend formats, and the decks that love them.