I’ll start this off by saying that I am the filthiest of filthy casuals.  If you’ve ever wondered who Wizards of the Coast is aiming at with stuff like Set Boosters, Collectors Boosters, and Secret Lair Drop series, I am the answer.  It’s me.  I have opened countless booster boxes and have never drafted any of them, and in fact I will never buy another draft booster box as long as Set and Collector’s booster boxes exist.

Despite the greater online community outrage, I also unironically and wholeheartedly love literally everything about Secret Lair: The Walking Dead, including the mechanically unique aspect of it.  Now, we’ve seen from upcoming product previews that WotC is going absolutely ham with the crossovers, and while I’m not personally into stuff like Fortnite and League of Legends, it has me excited at the possibilities of which crossovers could be next.

That got me thinking about which Universes Beyond crossovers would get me most excited, and with this list I’m dreaming big.  I’m not going to waste time here talking about properties like Marvel or Star Wars, or IPs like The Legend of Zelda, that stuff is obviously going to happen eventually.  Instead, I’m looking at some far fetched but still totally plausible IP’s that I would like most to see happen.

Okay this might immediately contradict what I just said because, of everything on this list, TMNT is a pretty obvious target for a Universes Beyond crossover.  Turtles is a massively popular IP with a fan base spanning several generations.  I’m including it because of the fact that we know that "Donatello does machines" and that common artificer colors red and blue make purple.  Not only is this the only reason I am mentioning TMNT, but this silly reasoning is actually the inspiration for this entire article.  It’s just too perfect, and if this crossover happened and a UR Donatelllo artificer card is the only thing that matches what I have dreamed up in my head, I will be satisfied.  But beyond this silly dream, there are actually so many cool things that can be done here.

I only get hung up on the colors for the other two Turtles.  Leonardo is an Odric-like figure in my mind, but how would that also be blue without being controlly?  Also, I think the Magic party dude colors are RG but that just doesn’t fit Michelangelo to me, so I’ll leave that part to the experts at Wizards of the Coast to sort out.

The art possibilities also have me excited.  There are so many iterations of the Turtles, but I’m both old and old school and used to pick up the original TMNT trades at my local grocery store back in the 80s.  I would love nothing more than to see some Turtle cards in the original Eastman and Laird art style, either black and white or color will do, but of course I would also settle for cards that looked like the original cartoon.

I am simultaneously both a Shadowrun junkie and poseur.  I have never played the pen and paper RPG but own and have played to death every iteration of Shadowrun video game going all the way back to the very different and very awesome SNES and Genesis 16-bit versions.  I even championed the ill-fated Xbox 360-era FPS, sticking with it for so long I would routinely get paired up with the game’s developers on Xbox Live because there was just no one else online playing the game.

The announcement of Kamigawa Neon Dynasty means this will probably never happen unless there is a huge and unexpected Shadowrun revival between now and then, since there is no way we are getting two cyberpunk themed sets within years of one another.

Although I would settle for a Secret Lair with a Jake Armitage Legendary, I really think that the Shadowrun lore, races, magic, and mechanics would just work so unbelievably well as a full blown Magic set reminiscent of Ravnica but with Shadowrun AAA Megacorps replacing the guilds.  I mean, there are literally 10 Megacorps and 10 two color pairs in Magic, this set basically designs itself!

Kaldheim sucked, okay?   Well maybe not the set itself, I guess, but the marketing for it.  Wizards of the Coast got us all charged up for a heavy metal set by calling it a heavy metal themed set, sending out heavy metal themed goodies to influencers, giving heavy metal bands preview cards, and preceding the Kaldheim spoiler season with the Party Hard, Shred Harder Secret Lair featuring art from actual heavy metal concert poster artists.

I was so hyped for this set based on that alone, and I was certain that the collector’s boosters were going to be full of so much wickedly awesome, face melting artwork that parents and religious types would finally think Magic was Satanic again.

Instead, we got literally nothing metal in Kaldheim.  In fact, the entire metal “theme” seems to have been based solely on the fact that there are Vikings in both Kaldheim and in Immigrant Song by Led Zeppelin.

The only way for WotC to redeem themselves is with an Iron Maiden Secret Lair.  Pick the most gnarly sounding and/or most devastatingly powerful cards in Magic, commission new Eddie art by Derek Riggs, and make it happen, WotC!  There are cards already in existence that sound like they could be Iron Maiden albums.  Imagine cards like The Meathook Massacre, Damnation, Darkest Hour, Gifts Ungiven, and Anger of the Gods but with Eddie on the artwork.  Shut up and take my money!

I cannot put into words how badly I need an Esper legendary creature card named Kelsier, Survivor of Hathsin.

Mistborn is actually the most perfect IP for a Universes Beyond crossover and I don’t just mean of any IP on this list.  It’s also the only one here with potential for spoilers, and as someone that likes to go into any book or film completely unsullied, I’ll warn you that are minor elements of the book spoiled in the next two paragraphs but no plot spoilers whatsoever.  If you’re skipping ahead because you haven’t yet read Brandon Sanderson’s masterpiece series of fantasy novels, believe me when I say that the world of Mistborn has all of the necessary pieces for not just a Magic crossover, but an entire three set block.

The Mistborn lore itself is just bursting at the seams with characters just screaming to be printed onto cardboard.  But as much as I would love to see things like a Lord Ruler Legendary, an OreSeur companion or flip card, a Sazed card that has built in Giant Growth, Mistwraith and Koloss horror creature cards, or a mono black Inquisitor card, what actually excites me the most about the possibility of a Mistborn crossover is all of the interesting ways that Allomancy could be turned into Magic mechanics.

When dreaming up how a Mistborn crossover would work, I originally thought that since there are 16 types of metals that can be interacted with, there was no way to represent all of the metal types equally while still keeping the mechanics relatively simple.  Then, I realized that it could be solved by the creation of “Metal” artifact tokens that could be sacrificed to different effects based on the character class, and the set could then borrow from that Adventures in the Forgotten Realms did by adding ability keywords simply for flavor.

Coinshots, for example, could have a “Burn Steel” ability that lets them sacrifice a metal token to do x damage to target creature or player, while Lurchers could “Burn Iron” to gain control of target artifact, and maybe either can use their burn abilities to gain flying until end of turn, with Inquisitors able to do any of these without controlling a metal token.

The metal token mechanic actually could suit most types of Mistings really well!  Rioters and Soothers could burn zinc and brass to create a Goad and Maze of Ith type effect, respectively.  Thugs could burn pewter to give themselves +x/+x until end of turn, and Copperclouds can burn copper to make themselves unblockable.

I won’t go through each type, but most have an already existing Magic mechanic or ability that can be slightly modified to fit this scheme.  The only thing left then is how Mistborn would work since they should be able to use any of these abilities.  I know Wotc doesn’t shy away from keyword soup these days, and although I really don’t want them to be Planeswalkers, I feel like a Mistoborn successfully burning Atium should have a near game ending result like a Planeswalker ult.  The most obvious correlation to Magic would be forcing an opponent to reveal and then exile their hand, but I feel like there must be a more elegant way of bringing this to cardboard.

Some of these ideas like TMNT are obvious and pretty likely to happen, while something like Shadowrun and Iron Maiden will probably just remain a beautiful dream.

What’s surprising though, is how likely it actually is that a Mistborn crossover will happen.  I knew when I started this article that Brandon Sanderson had been on Game Knights in the past, and wrote a Magic the Gathering novella, but what I didn’t realize is that he has already completed a Mistborn movie treatment and is creating his own production company to turn Mistborn into a feature film.  And while I was writing this article, Sanderson announced a new Mistborn book, slated for release in November of 2022.  Surely a Magic set would be great cross-promotion, and the fact that there was, for Zod knows what reason, Mistborn/Fortnite crossover this past May makes me really believe that this could happen before anything else on this list. 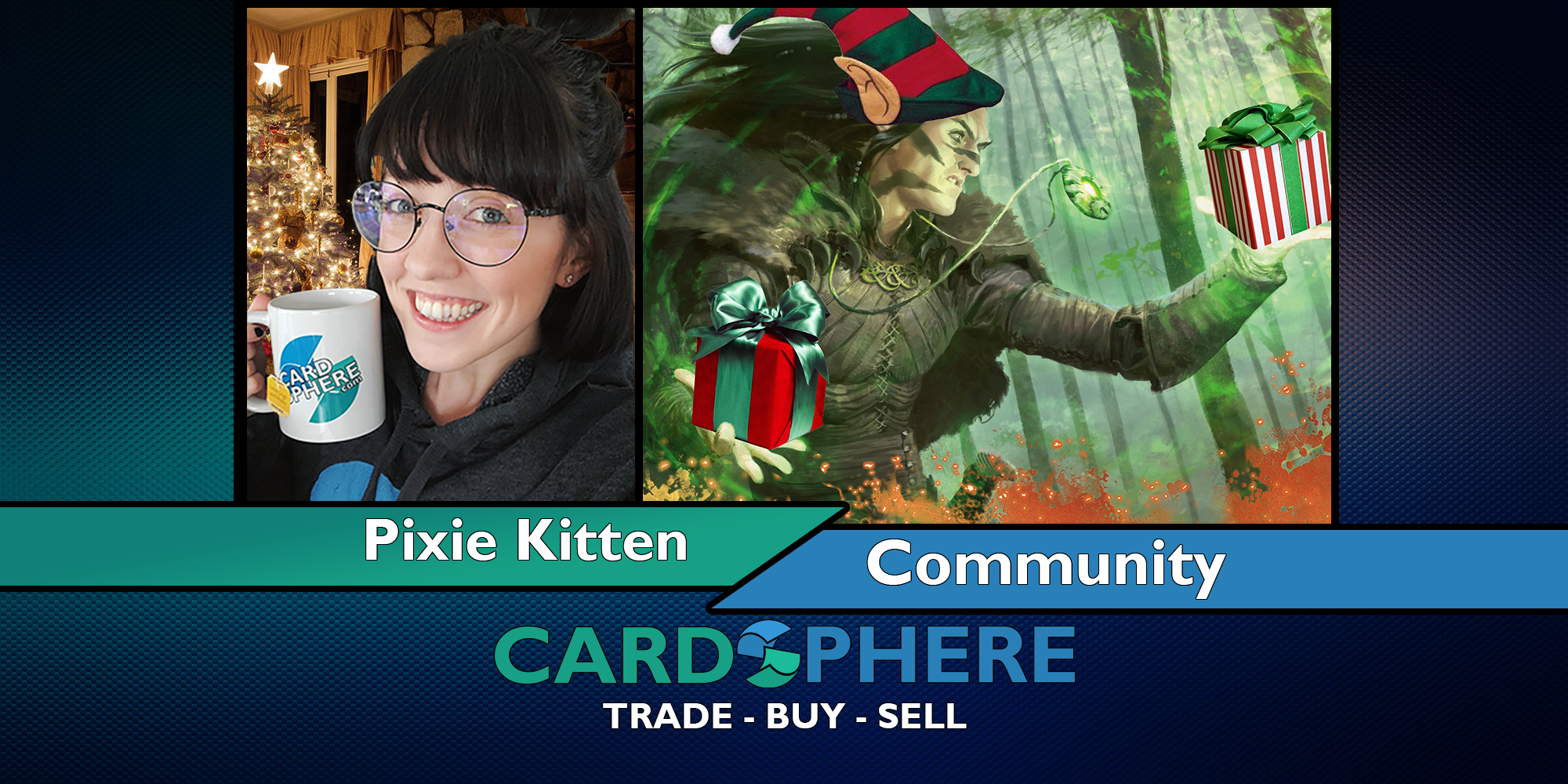 Pixie Kitten gets festive on Scryfall looking for the elves most likely to be working with Santa in his workshop. Come check out what the funniest woman in Magic thinks!

Andy Zupke pulls out five guests from the wedding of the centuries to lead new Commander decks. Or... maybe four guests, one frog?