Welcome, guests, to this most joyous occasion! We gather here today to celebrate 5 legendary creatures from the latest Magic set, Innistrad: Crimson Vow. We’ll look at all the best cards to play with each of them in your Commander decks. And hopefully, you’ll be saying “I do” to at least one of them.

We’ll start with the bride herself, Olivia, Crimson Bride. As a gift to her wedding guests she gives you a free creature from the graveyard whenever she attacks. So of course, we’ll want to make sure our yard is bursting with powerful creatures to reanimate. To do that, we’ll rely on cards like Entomb, Final Parting, Vile Entomber, Buried Alive, Burning-Rune Demon, Corpse Connoisseur, Gravebreaker Lamia, Oriq Loremage, and Unmarked Grave.

What kind of creatures do we want to pull out of the grave? We’ll be looking at things that have a massive impact when they enter, such as Fanatic of Mogis, Gray Merchant of Asphodel, Archon of Cruelty, and Massacre Wurm. We’ll even throw in a Terror of the Peaks to deal more damage when other big nasties enter.

But what if we’ve already yanked everything out of the graveyard? Let’s include some creatures that we know will be going back there quickly, like Ball Lightning, Blistering Firecat, and Lightning Skelemental. We’ll also throw in some utility with Glarewielder and Spitebellows.

Olivia’s trigger is based on combat, and I’m not satisfied with doing it just once per turn. So we’ll throw in extra combat spells like Moraug, Fury of Akoum, Seize the Day, Relentless Assault, and Aggravated Assault. Or we’ll copy the trigger with Strionic Resonator and Lithoform Engine.

Last, we’ll want to make sure we’re getting more benefits from our creatures leaving the graveyard. So we’re gonna throw in Tormod, the Desecrator, Desecrated Tomb, and Syr Konrad, the Grim. This deck can easily be fit to whatever power level you want. You can up your game with extra tutors and fast mana, or keep it casual. Either way, you're gonna have fun with Olivia if you like graveyard shenanigans and combat.

This party is likely to go all night, so be sure to keep the drapes closed so our guests don’t croak in the morning sunlight. Speaking of croaking, our next special guest is Grolnok, the Omnivore. I'm a big fan of Grolnok, because we’re basically getting a second hand that has no limit and can't be touched by discard effects.

Unfortunately, there aren’t a ton of great frogs in Magic, but we’ll include the good ones. We’ve got Froghemoth, Jade Avenger, Haze Frog, Plaxcaster Frogling, and Trollbred Guardian. And there are changelings too, so we’ll drop in a Chameleon Colossus, Realmwalker, and Shapesharer.

If we want more frogs, we can run clone effects, like Sakashima of a Thousand Faces, Cackling Counterpart, and Croaking Counterpart. We’ll even throw in a Maskwood Nexus so we can run cards like Avenger of Zendikar for frog domination.

We can't just rely on attacking frogs, so let’s throw in some more self-mill. We’ll add Mulch, Fact or Fiction, Golgari Grave-Troll, Perpetual Timepiece, Tamiyo, Collector of Tales, Otherworldly Gaze, and Epiphany at the Drownyard. And like Olivia, we’ll be copying triggers with Lithoform Engine and Strionic Resonator. Oh, and if you're thinking of having everybody join in on the Mill fun, throw in a Mesmeric Orb.

If all goes right, we’ll be dropping a ton of lands into exile, so we’ll toss in some extra land spells, like Summer Bloom, Azusa, Lost but Seeking, Exploration, and Aesi, Tyrant of Gyre Strait. And our nonpermanent spells will stay in the yard rather than go to exile, so we’ll add a couple of ways to get those back, like Archaeomancer and Bond of Insight.

How are we gonna win? Well, if the goal is to Mill ourselves out, then the obvious answer is Laboratory Maniac, Thassa’s Oracle, and Jace, Wielder of Mysteries.

What do you get when a vampire eats Red Lobster instead of red blood? Runo Stromkirk! The goal with this flying vampire monster dude...thing...is to drop some fantastic sea monsters so that we can copy them with Runo’s backside, Krothuss, Lord of the Deep. Our biggest baddies in this deck are gonna be Hullbreaker Horror, Stormsurge Kraken, Deep-Sea Kraken, Icebreaker Kraken, Nemesis of Reason, Mesmerizing Benthid, Scourge of Fleets, Serpent of Yawning Depths, and Spawning Kraken. We’ll also throw in a Brinelin, the Moon Kraken, even though we’re not likely to make copies of it because of the legend rule.

We’ll need to manipulate our top card to trigger Runo’s flip, so for that we’ll use Sensei’s Divining Top, Scroll Rack, Bone Harvest, and Haunted Crossroads. We’ll need at least one creature in the yard, so we’ll throw in an Entomb and Selhoff Entomber as well.

For even more tokens, we’re running Rite of Replication, Mystic Reflection, Cackling Counterpart, Replication Technique, Helm of the Host, and Kiora Bests the Sea God. To round things out, we’ll throw in a few non-sea creatures, like Massacre Wurm, Grave Titan, Frost Titan, and Consuming Aberration. These are all fantastic with Maskwood Nexus, Amoeboid Changeling, or Amorphous Axe to give them the creature types we need.

We’re gonna want to keep the combats coming, so we’ll throw in some extra turn spells like Alrund’s Epiphany, Karn’s Temporal Sundering, and Beacon of Tomorrows. Our friend Thryx, the Sudden Storm will be there to keep our big spells cheaper and uncounterable. And let's not forget our best board wipe, Whelming Wave.

Olivia and Edgar aren’t the only couple being celebrated in this set. First introduced separately in Commander Legends, Halana and Alena, Partners brings the two together on a single card. It’s easy to compare this one to Xenagos, God of Revels, as they do similar things. But with Halana and Alena, the creatures are getting +1 counters permanently rather than a power boost that goes away at end of turn. So we’re going to lean into the counters strategy.

We’ll start with Krenko, Tin Street Kingpin, who’s going to be providing a lot more goblins with H&A’s help. Aerie Ouphes acts as removal for flyers trying to swoop in. Incubation Druid and Fertilid build up our mana, Herd Baloth makes tokens, and Inferno of the Star Mounts quickly gets to that 20 point damage spike.

Visions of Dominance and Ruinous Intrusion add more counters, great for pumping up your commander so they dish out more counters themselves. We’ve also got Doubling Season, Hardened Scales, and Biogenic Upgrade. If you’re in need of more mana, throw in Rishkar, Peema Renegade, Jiang Yanggu, Wildcrafter, and Domri, Anarch of Bolas.

Ring of Valkas and Ring of Kalonia are great for throwing on H&A. Unnatural Growth is a bomb in this deck, and you can stack the triggers to get the most benefit. Death’s Presence and The Ozolith save our counters if we lose our creatures. And Asceticism protects our creatures from spot removal.

And lastly, we have our least welcome guest at the reception table. Umbris, Fear Manifest makes short work of dismantling your opponents’ game plans while building itself up to swing for the commander damage win.

Then to get Umbris across the finish line, we’ll use Whispersilk Cloak, Trailblazer’s Boots, Dauthi Embrace, Traitor’s Clutch, Suspicious Bookcase, and Aqueous Form. Or we can lower the damage needed for lethal to 10 by giving Umbris Infect with cards like Phyresis, Tainted Strike, and Grafted Exoskeleton.

All right friends, we've come to the end of our analysis of Crimson Vow. What commanders are you excited to build for this set? What are your favorite cards for the 99? Hit me up on Twitter at @AndyZupke and let me know. You can also catch me streaming budget EDH Sunday nights at 7:30PM Central at twitch.tv/scraptrawlers.

Check back here in two weeks as we start our review of everything 2021. I can’t believe this year is almost over already! Until next time, take care. And play lots of games! 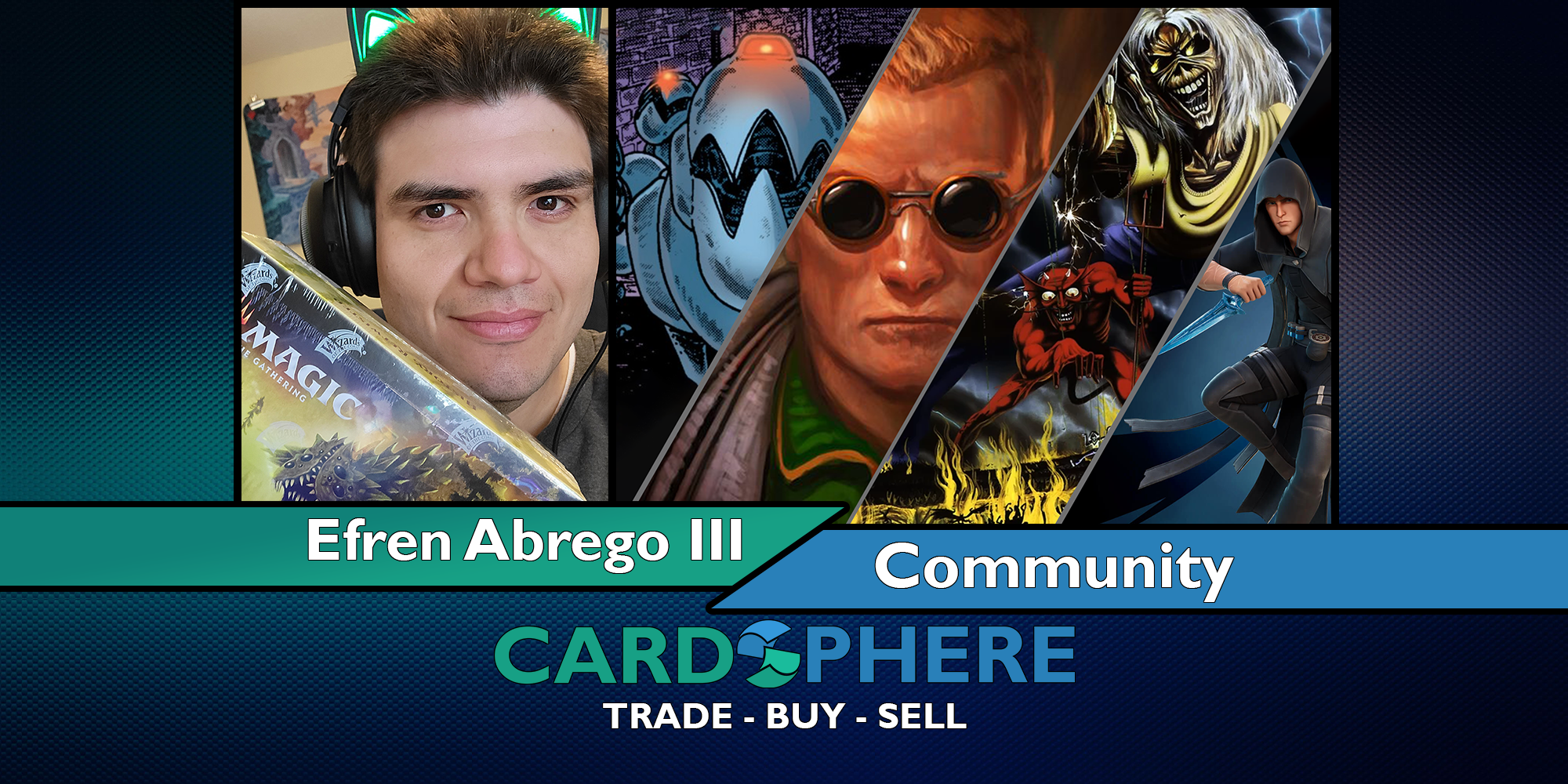 Efren is here with his wishlist for the next four Universes Beyond crossovers from Wizards of the Coast. 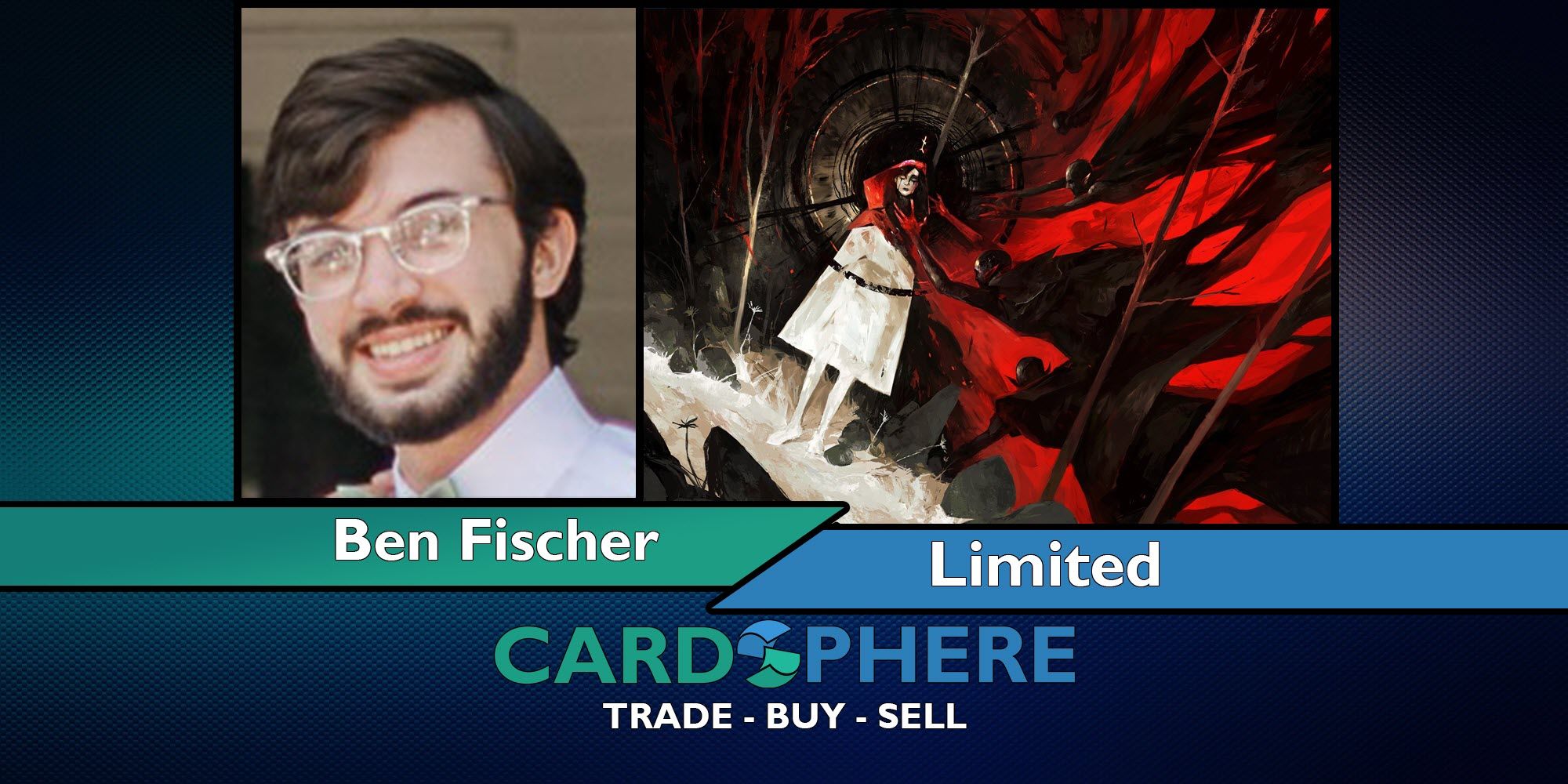 The title of this article is NOT a typo. I need your help with something that we limited players tend to love: analyzing the living daylights out of a corner case. It involves going against one of the most fundamental limited heuristics of all time: don't trade two cards for one!