Modern Horizons is a business model that I hope Wizards never does again. Let me illustrate why, in one easy graph:

In five weeks, the price of this card has tripled and it’s not done yet. Modern Horizons is a confluence of cards that Modern players are going to want and a supply that’s smaller than it should be due to Core 2020.

This means that if you want to get in cheap, get in now. If you might want to play Wrenn and Six in whatever build of Modern or Legacy, getting your playset now at $360 is going to hurt less than it will at Christmas when it’ll be $100+.

I seek value. I don’t like speculating on cards, but what I hate most is buying a card for a price that’s a lot more than I would have spent if I’d bought sooner. Call it FOMOCAP: Fear of Missing Out on Cheap-Ass Prices. (It’s a working title.)

Modern Horizons is full of cards that flatlined early and are starting to pull up impressively.

Force of Negation has gotten some excellent camera time, and is played in a wide range of strategies.

Hexdrinker hit a high and has come down a little, but is still $10 more than it was.

Aria of Flame could have been had for under a buck after preselling for $15.

Not coincidentally, these are all cards that have had some impressive camera time and recorded 5-0 finishes in leagues. Wizards needed to make these pushed and powerful or else the set wouldn’t sell. They certainly did that, and now they are getting our attention with Commander 2019 previews about to start and after that, Throne of Eldraine.

So I’ll say this very clearly: Modern Horizons is about to get expensive, card by card. At $7 a pack, you’ve got a 33% chance to open a card worth $7 or more. That’s some impressive EV for a set we just stopped opening. War of the Spark, with packs at $4, has a 20% chance of making your four bucks back, slightly worse than Core 2020’s odds.

Yes, if the set gets more valuable then vendors and dealers will begin opening packs for the singles. We aren’t far from that point now but keep in mind that for a Modern Masters set, I’d expect prices to start rebounding about six months after the set’s release. What the heck will these prices be in four more months?

With that in mind, I want to look at some of the best value still remaining in Modern Horizons, and save your future self some money by buying these while they are cheap.

You’re going to notice that a lot of Modern Horizons cards have crazy foil multipliers. That’s Commander players and Legacy players and Cube players all deciding that they want the shinier, rarer card. I’m that way myself, I’m not judging.

Echo of Eons is a mythic in this set that hasn’t found a home yet. There’s only a handful of Timetwister-like effects in Modern, and some deck is going to abuse the super-cheap flashback cost. If you feel like speculating, Echo will likely be broken alongside Day’s Undoing.

Unbound Flourishing is an easy card to build around in Commander, and again, it’s a mythic from this smaller-than-average run. I’m skeptical about this being big in other formats, but Commander is all over this card. Double your Fireballs. Double your Genesis Wave. Go full ham with Hydra Broodmaster. One day soon, you’ll wake up when this is $20 and think “Argh, why didn’t I buy this when it was cheap!”

Yup, that’s a 10x multiplier and most of the time, that’s the influence of Eternal formats. (See Narset, Parter of Veils.) Lightning Skelemental is pure value, especially in decks running Unearth or the charmingly-named 8-ball decks. Hollow One builds are also running this card, as a terrifying follow-up to broken things on turns one and two. Two bucks is going to feel like a steal before long.

Surprisingly, Infect decks in Modern are the ones adopting this card first. Giver of Runes has got some play in Devoted Vizier combo decks, or a strong protector in the Mardu Death’s Shadow decks which are now running lots of Ranger-Captain of Eos (another card that plays absurdly well with Unearth!) but the important thing is that Giver is trending downward. If you’re thinking of a creature strategy in Modern, she’s going to be high on your list.

I’m taking a leap on this one. I don’t know yet where it’s good but Force of Despair's effect is absurd. There are too many decks in Modern focusing on one huge turn, and this is an effect completely unique in Magic. Plus, it’s quite cheap even in foil, so you’re not sinking a lot of your collection’s value into such a possibly-good-one-day card. When it hits, though, it’ll make you feel like a genius.

First, I left the lands off of this list. I was very high on them at first but they aren’t seeing a lot of play. Even when they do, they aren’t going to be able to move the price very much. I haven’t seen a Modern deck running more than a few copies, and I thought at least Burn would play six or more. As a result, I’m not picking these up currently and I’m waiting for the price to trickle downward.

Second, have some free value: There’s only two foil versions of Altar of Dementia, Modern Horizons and original Conspiracy. Before the MH version, foil Altar was about to hit $40 but it’s come down to $20. You can get the newer foil version, with the same art and even the same flavor text, for $9. Hold any Conspiracy foils you have, and pick up extra Horizons foils for when the two prices meet.

Admit it. Everyone likes to ruin other players' fun every so often. And what could be better than using a deck chock full of enchantments? 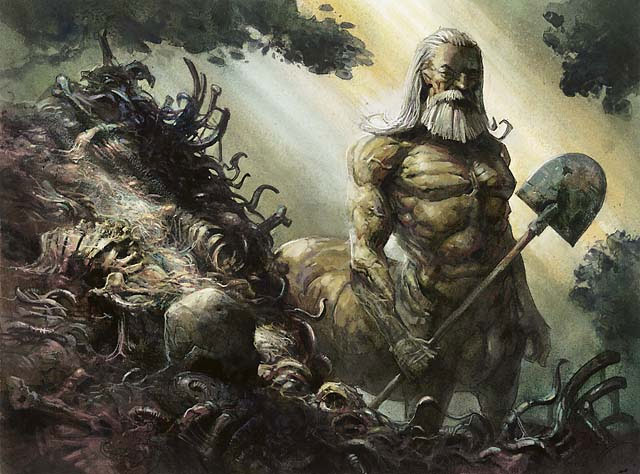 Sometimes winning simply means not losing for longer than your opponent. Lord Tupperware takes us through his #MTGM20 version of this strategy.