I have a confession to make: I am a hopeless Cube junkie. Ever since I discovered the joys of Cube drafting, I was hooked. I would eagerly await the two weeks where MTGO would release a Cube and try to jam as many drafts as I could. Even though the card pool is finite, every draft and game feels different. There’s always something new to discover, an interaction between two cards that I’ve missed or a new lesson to improve my skill as a magic player.

However, Cube is incredibly daunting. If you’re new to magic the amount of unfamiliar cards can be overwhelming and you may choose to pass on the entire experience. There are many folks who I find in my twitch chat that love limited, but just can’t quite seem to get into Cube drafting. It's my mission to help show people the light and encourage all drafters out there to dive into Cube. I guarantee the rewards will be worth the growing pains. Let’s give it a shot, shall we?

What is a Cube?

A Cube is a curated draft environment of singleton cards from all of magic’s history. The size of the cardpool (360, 540, and 720 being the most common) and the restrictions on those cards (Power 9 included, amount of mana rocks, Modern legal cards, Uncommons only, etc) vary from Cube to Cube, but the general guiding principles remain the same. When building a Cube you want to build in and support certain archetypes. These vary depending on the goals of the Cube designer, but for our purposes I’m going to focus on the Modern and Legacy Cubes available on MTGO. Vintage Cube is a different beast and deserves its own separate exploration. Shameless plug for our Lords of Limited Vintage Cube Crash Course:

Below I’m going to take a look at each color in Cube, its identity, and what it looks like when paired with other colors. These are broad strokes, but having an understanding of the possible archetypes is the first step towards success when drafting Cube.

On its own White is an aggressive deck at heart, looking very similiar to the deck we see dominating standard today. Lots of cheap, aggressive threats, oftentimes token makers, buffed by a variety of anthem effects (named for Glorious Anthem, but Spear of Heliod or Honor of the Pure do the trick as well.) This aggro side of White pairs nicely with Red's main gameplan in Cube for a Boros aggro deck. If there happen to be mana rocks available in the Cube, you might be able to draft my favorite deck: Boros Control with Wildfire, Balance, and Greater Gargadon.

With the abundance of board whipe effects at White’s disposal, it pairs very nicely with Blue for a strong control deck. Affectionately termed Blue-White Cheons, it uses Blue permission, cheap White removal, wrath effects and powerful planeswalkers to win in the late game. Selesnya and Orzhov are less clearly defined. White and Green can be a “hate bears” style of deck with Thalia, Guardian of Thraben and Gaddock Teeg to prey on the control decks of the format. More often it’s a midrange ramp deck with a possible tokens sub-theme, pairing the anthem effects with Deranged Hermit and Master of the Wild Hunt. Orzhov has a number of possibilities in Cube. Both colors have access to a high density of sweepers as well as a number of powerful planeswalkers, which might lead you down a control path. Cheap removal and hand disruption may lead you towards a Death and Taxes style deck. And if Braids, Cabal Minion and Smokestack are present, you may get to build a prison-style deck to lock your opponent of permanents for the game.

Blue is the most powerful color in all of magic and in Cube it’s no different. Countermagic, card draw, and Control Magic effects are chief among Blue’s contributions to the Cube. There is rarely a supported mono colored option unless a devotion theme exists with Thassa, God of the Sea, Nightveil Specter, and Master of Waves. This leads Blue towards a more aggressive/tempo style deck, but it’s most at home taking full control of each game.

As far as color pairs, Izzet provides Blue the most options. It can be a “get ahead, stay ahead” tempo deck with Young Pyromancer type effects, leveraging burn from Red and cantrips and counterspells from Blue. It is also home to the Pestermite / Splinter Twin combo that includes Kiki-Jiki, Mirror Breaker, Deceiver Exarch, Zealous Conscripts and Restoration Angel. Simic decks are looking to combine the fast mana from Green and the card advantage from Blue to get you far beyond your opponent on both mana and resources. Ideally, you’ve got either Upheaval or Opposition to utilize the mana dorks from Green late in the game. Lastly, Dimir is most likely a Reanimate deck. Blue has a number of ways to churn your library into your graveyard with Jace, Vryn’s Prodigy, Looter Il-Kor, Thirst for Knowledge and much more. This allows you to reliably get an expensive creature in the graveyard and use one of Black’s reanimation spells to get it into play. Bonus points if you have some Blue permission to protect your gameplan.

Generally thought of as the weakest of the colors in Cube, Black is most often a support color given its abundance of removal. However, it can stand on its own. Currently, the mono Black build is devotion based. If the archetype is open, you can reap the rewards of your neighbors passing on powerful but mana intensive options. Ideally your curve allows you to go Vampire Hexmage into Geralf’s Messenger into Phyrexian Obliterator into the big mono Black payoff: Gray Merchant of Asphodel.

Golgari is often another variation on reanimator. You may find yourself with the classic combo of Survival of the Fittest and Recurring Nightmare or the archetypal “Rock” deck with a number of value ETB creatures like Jadelight Ranger, Ravenous Chupacabra, and Acidic Slime. Rakdos is not often a supported archetype in Cube. The most common theme you will see is a sacrifice deck taking advantage of Blood Artist, Zulaport Cutthroat, and Goblin Bombardment. But, sadly, that deck is not present in the current iteration of Legacy Cube.

Ramp is the name of the game with Green in Cube. One and two mana creatures or spells that accelerate your mana in order to cast powerful late game spells much earlier than normal. Primeval Titan, Avenger of Zendikar, Woodfall Primus, and Tooth and Nail are some of the most powerful options. Gruul is often one of the weaker color pairs. However, in the iterations of the Modern Cube on MTGO of late, it has been among the best.

It plays out like a midrange deck, often with the curve stopping at 5 or 6. It’s more interested in being a single turn ahead on mana so the mana dorks are still important, but less so than in the Mono Green decks. And then you’re looking to pressure your opponent with value creatures like Tireless Tracker, Bloodbraid Elf, and Glorybringer.

Cheap, aggressive creatures backed up by cheap burn spells. There’s a reason this deck is called the fun police. It’s a great intro deck for new cubers as well. Drafting this deck is fairly straightforward and the gameplay mirrors that of red decks in Standard and Modern. It’s familiar and will almost certainly lead to some early wins for new cubers.

What’s in the Box?

Now that we’ve got a good grasp on what each color and color pair is trying to do in Cube, let’s go over some universal Cube truths.

Curve matters, take cheap cards. There is a trap for new cubers to see a pack of powerful cards and think that taking what they perceive as the bomb to be correct. Believe me, you will have an opportunity to pick up a creature that costs 6 mana at some point in the draft. The utility creature, mana rock, counterspell or other cheap spell is almost certainly the pick. You will eventually learn which expensive spells are above replacement level in the cube (I would consider Consecrated Sphinx, Elspeth, Sun’s Champion, and Inferno Titan to be on the short list.)

Lands are incredibly high picks, especially fetches. Limited mana bases are by nature always suboptimal. You just don’t have enough card slots to truly get the number of colored sources you need. Being able to draft fixing, even for a two color deck, is very powerful. The fetchlands in particular open up a lot of options with the amount of dual lands in the cube. Even if it’s not in your “colors” at the time, taking an Arid Mesa early can make Taiga playable in your Selesnya Deck because now Arid Mesa can find white or green mana.

Draft a deck with a plan. Cube is a great teaching tool for drafting a deck that is greater than the sum of its parts. Drafting around key cards outlined in the color pairs above or some other favorites are great ways to learn this. At the end of the draft you should be able to put a label on your deck and every card should really fit under the umbrella of that label.

Try to read signals as best you can. Signals are tough to read in Cube as the power level of all the cards is very high, and the distribution of each pack is, to an extent, random. I think the most important thing to notice is what is wheeling. If you are seeing a density of utility cards in a certain mono color or two color archetype, it might be good to move in.

Learn from your opponents. Cube can seem daunting but rest assured it will only take a few drafts before you’re familiar with most of the cards. This comes from not only paying close attention to your own drafts, but to what you’re seeing on the other side of the battlefield (both when your opponent’s deck is working and when it’s not.)

And last, but certainly not least, have fun! Cube is a recreational format. I believe that playing Cube is the greatest contributor to my improvement as a limited player, but it’s also where I feel I can exercise creativity the most. As soon as I finish this article, I’m gonna jump in the queues with this great looking Golgari Deck. What are you excited to play with in cube? Send me your sweet cube decks or cube questions on twitter. And, as always, happy drafting! 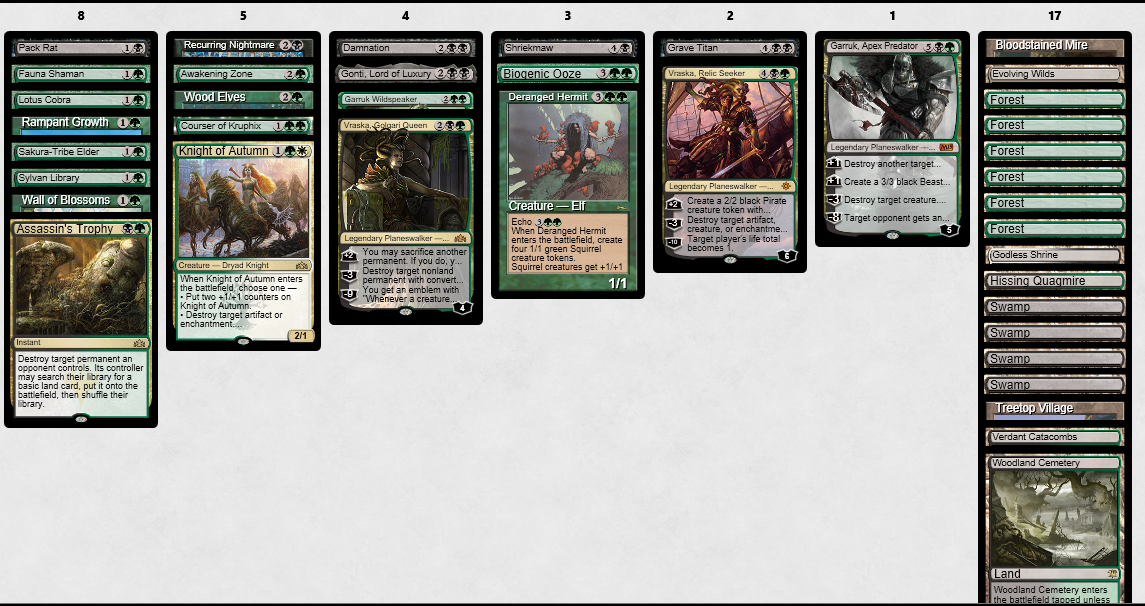 What happens when you introduce Pteramander to Delver of Secrets? Andrew from Tier Fun lets you know in this edition of the Search for Spice!

In this personal piece from Joe Dyer, he talks about how you can fight off gloom even when you're running cold despite your best preparations.

Trading Posts
—
Drafting to the Third Power: An Introduction to Cube
Share this