Hello friends, and welcome back to Cardsphere! I’m really excited for today’s article because we’re digging into the brand new set Dominaria United for the first of my two-part review. This set looks incredible, and I can’t wait to pick up some singles for my decks. And maybe even build some new decks too! Today we’ll focus solely on the cards that can lead your commander decks, of which there are an astounding 75 (if we count both the main set and the Commander product) in this set. But I’m not gonna bore you by dragging you through all 75 new lead-singer candidates.

As we know, not all legends are going to spark joy in the masses or have much impact on the format. This is especially true when there are 75 new options, and each set from the last couple years has given us so many legends that it’s impossible to keep track anymore. So we’ll bypass the Baird, Argivian Recruiters and Bortuk Bonerattles of the set, and just focus on the hot new candidates to lead our decks. I’ll also give you a few ideas for cards that I’d add to the 99 for each one. Let’s go.

Poor Braids, Arisen Nightmare. What have they done to you? She’s come a long way from her mono-blue group hug origins. What I really like about her newest iteration is that it’s not just Grave Pact on a legend. That would be horrible. Instead, you’re giving opponents the option: sacrifice something or lose life and I draw a card. It’s not a forced sacrifice, so you don’t have the feel-bads of making someone who’s already behind be unable to keep their stuff. Plus, if you sacrifice a card type they don’t have, it’s just an automatic draw. There’s a lot of fun potential here, without being overbearing or overpowering.

Black has the ability to draw a ton of cards, sure. But it doesn’t have many options to “wheel.” And that’s the important detail keeping me from sneering at Sheoldred, the Apocalypse. The great thing here is that most of black’s card draw effects cause you to lose life, which will be nullified by Sheoldred. And we can’t forget Peer Into the Abyss, a one-shot killer with this commander.

So here’s the thing about Astor: it can discount both Crew and Equip costs, but you’d be a madperson to try to build a deck around both. The only thing vehicles and equipment have in common is that they’re both artifacts. There’s no strategy, at least that I’ve ever heard of, that can somehow combine the two. That said, if you pick Astor, Bearer of Blades to run either your equipment or your vehicle deck, you’ll be making a great choice. And he easily goes into the 99 of any already existent Boros or W/R/X deck for vehicles or equipment.

They certainly nerfed this guy by making him not be blue. I mean, could you imagine how stupid it would be with all of blue’s clone token effects? Anyway, Cadric, Soul Kindler does some really fun stuff, even if he's not in the right colors to be top tier. But he might be more popular in the 99 of 5 color legend decks, like Sisay, Weatherlight Captain, than he will be leading his own.

I’ve always said that having Flash in the command zone is rarely beneficial, because you don’t really have the element of surprise that makes Flash good. And that certainly holds true with Ertai Resurrected. But what you do have is a powerful, versatile control piece that can never be fully removed from the game. That said, control isn’t always a popular strategy in casual games of commander. At least not for the people we’re playing against. We’ll see where this guy ends up in popularity, but his power is unmistakable.

Probably the most niche legend on this list, Ramses, Assassin Lord earns his spot above all the other creature type-focused legends by giving us a really fun alternate win condition. But tread lightly; you will be the archenemy in every single game you play with this commander. If being the villain in a game of commander is your thing, then you could certainly do worse.

Gruul gets an Urza? Kinda! While Meria, Scholar of Antiquity isn’t quite at the level of Urza, Lord High Artificer, it’s close enough that she’s going to be very popular. Really, any legend that has mana and card advantage built into it is usually a safe bet to win over the hearts of our community. The one big drawback is that Meria can’t use tokens for either of her abilities. And for that, Urza is still the champ. Also, watch out for people playing this as a stax commander, with Winter Orb and Static Orb.

Like Aether Vial, but for artifacts, Jhoira, Ageless Innovator is looking to drop tons of free artifacts on your board. With Proliferate, and several ways to untap her within the blue/red color identity, she’s sure to be a powerhouse. Especially since she costs just two mana!

Is Elas il-Kor, Sadistic Pilgrim one of the best aristocrats commanders ever printed? Yes, absolutely. And, just like Jhoira, only 2 mana. Power creep, much? Ha ha, just kidding. Unless…

Orzhov gets a zombie lord? You bet it does. And it even makes zombies. How cool is that? But the best thing about Ratadrabik of Urborg is that the zombie copies it makes of your dead legends AREN’T LEGENDARY. That’s right, just go ahead and reanimate your legends to have two of them. Eat your cake and have it too.

Is Shanna, Purifying Blade better than Tymna the Weaver? Probably not, but I’m sure people in the cEDH community can give that a better answer than I could. There’s no requirement for you to attack, which is a plus. But the card draw cost must be paid with mana instead of life. A minus, kind of, but at some points in the game it will probably feel like a plus. Hard to tell how high this one will end up, but Shanna’s low cost/high power/color identity all seem like an incredibly powerful combination.

My first reaction upon seeing Zur, Eternal Schemer is to imagine if it was released in Theros: Beyond Death. In Dominaria United, there are no enchantment creatures. So probably not something you’d be happy to crack open in a draft. But leading a Constellation and enchantress deck? This guy is incredible. One of the best enchantment legends ever printed, and sure to be a hit among Commander players.

People love playing with their lands. So commanders that let you do that are always a smash hit. Lord Windgrace. The Gitrog Monster. Tatyova, Benthic Druid. All hugely popular. And why wouldn’t they be? Why not get rewarded for using the cards that you have to use to play the game? The trick with Soul of Windgrace is making sure you have lands in hand. That’s not always easy, since you usually need to play your lands. Still, there are plenty of ways to not only get more cards, and thus more lands, into your hand, but also ways to get those lands you pitched from your graveyard onto the battlefield.

I think Shanid, Sleepers' Scourge is probably more for the 99, as it’s going to be very potent in 5 color legend decks that people are in love with. For instance…

Another super powerful 5-color legend? Of course. Why wouldn’t there be? No new Sisay in sight, but we’ve got a new Jodah, who’s an actual real 5-color legend this time. Very similar to Heroes’ Podium, with the benefit of being able to sit in the command zone. Like I said, 5 color legends decks are very hot right now. And Jodah, the Unifier is only going to add to that fire.

Alright friends, those are my picks for the commanders from Dominaria United that are going to impact our format the most. What do you think? Any I missed? Hit me up over on Twitter at @AndyZupke and tell me how wrong I am. You can also catch me doing budget Commander shenanigans with the Scrap Trawlers on YouTube and Twitch.

Make sure to check back soon, because we’re not done with Dominaria United. Next time I’ll review the rest of the set and tell you my final thoughts. Until then, take care. And play lots of games!

Autumn brings many blessings, but only pumpkin spice lattes are as sweet as rotation! Pixie Kitten proposes who else might be super excited about the fall treat's retrun. 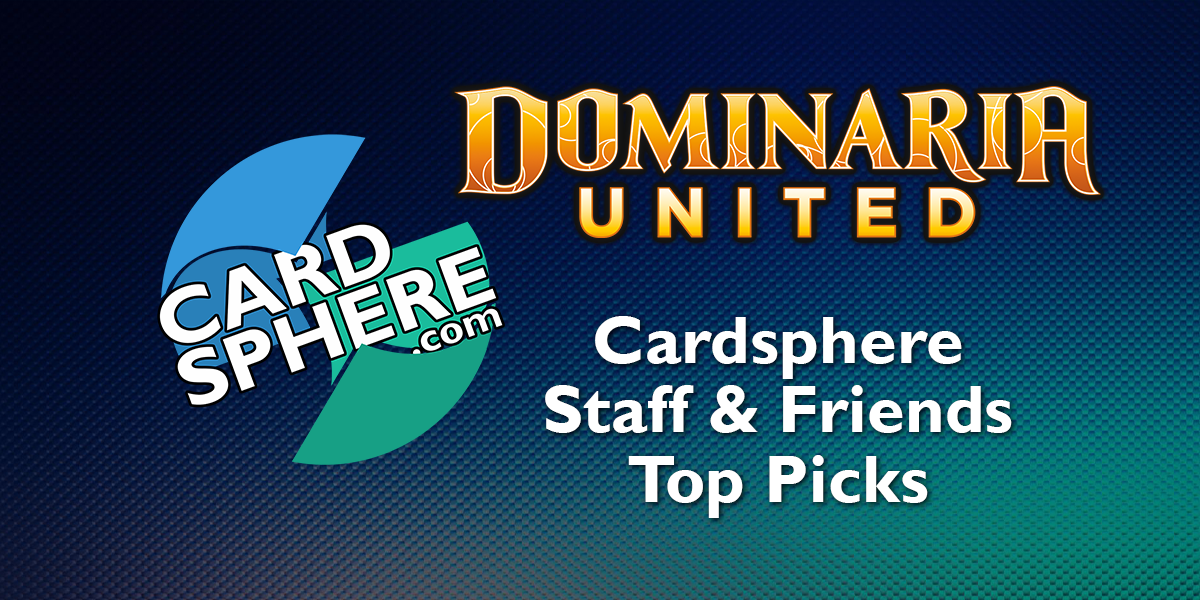 Bodey, Doug, Ted and community member JD McKeehan give us their favorite picks from Dominaria United.