Writer's Note: all pricing is current as of 10/13/22 and based on TCGPlayer unless otherwise noted.

My, oh my, has it been a fire hose of set releases dating to August or what! Between Dominaria United, Warhammer 40K, Unfinity, and now Brothers’ War, we’ve been non-stop with set releases since August when spoilers began. I have admittedly had a hard time keeping up with everything, and my coverage of Warhammer 40K has been delayed as a result. Never fear, though. It seems the rest of the community feels the same way. Product fatigue is a real thing right now, and we’re all being forced to pick and choose which sets to spend our hard-earned money on.

As I was doing my research for this article, it became apparent that aside from Dominaria United (which we covered in depth over at Conviction), some of the recent sets, notably Warhammer 40K and Unfinity, have plenty of depth still left to explore by the community’s content creators and brewers. It even appears MTG financiers have been a bit more timid in terms of pushing speculation onto the latest sets, especially compared to earlier in the year. I suspect most speculators are still churning through what they bought for Dominaria United, and thus the dollars available to put into Warhammer 40K and Unfinity specs just haven’t materialized yet.

This is good for us, though! It means we can hopefully still find some gems to be buying without paying an inflated, post-spike premium.

At Conviction Gaming, we generally aim to provide spoiler coverage in two bursts. The first is primarily through “news flash” style alerts on Twitter and our Patreon, and the second is through well-organized articles and/or podcast episodes. For Warhammer 40K, we did both!

This article focuses on one of the top performing commanders coming out of the Warhammer 40K release weekend, Ghyrson Starn, Kelermorph.

Let’s break Ghyrson down: it’s a “Tim” general! For anyone holding out hope, you can finally play your Alpha copy of Prodigal Sorcerer in Commander and it be useful!

Ward is a nice mechanic built in here to help deter targeted removal, but with a mere three converted mana value, Ghyrson is pretty easy to cast and recast as necessary. That bodes well since this is a “build-around” general who’s entire strategy will be significantly more successful if it is on the battlefield.

Ghyrson’s triggered ability tells us exactly how to build the deck. We want to be hitting our opponents and their permanents for exactly one damage, so our card pool is immediately narrowed a bit (here’s a helpful search on Scryfall if you want to build the deck yourself).

I’ve laid out below the top five cards I think you should pick up as soon as possible if you see yourself building Ghyrson. For the MTG financiers out there, I have included additional details about which ones are spec worthy and where I’d be looking to buy them. Using our Conviction Gaming motto, we're always thinking like a brewer and buying like a financier to help keep our costs (and hopefully your costs) of playing Magic: the Gathering down.

First up, we have Archmage Emeritus from Strixhaven: School of Mages. I am a big fan of this card for more reasons than one. It has a huge demand profile spanning across multiple strategies, and is often a best-in-slot choice for decks that want to be spellslinging their way to victory! In fact, it got four new commanders that should want a copy over the past three set releases, and a fifth in Ghyrson that will want it if you’re choosing to run a high concentration of “pinger” spells.

I am a huge fan of getting copies of Archmage Emeritus, especially if you’re the type of player who enjoys casting and/or copying instants and sorceries (hint: I am). I recently sold two Extended Art copies on TCG Direct for $8, and I suspect that was actually too low. I think they’re poised to climb into the double-digit range through the winter months, and should settle at a new $10+ floor by March 2023. The pack non-foil is reasonably priced under $4 on CardTrader and TCGPlayer, and you can trade for one of these on Cardsphere for around the same! I expect these to steadily climb over the same timeframe mentioned above. Barring an unexpected reprint in Secret Lair, this is a slam dunk spec with a 10/10 confidence level.

History tells us that single-print rares from Mercadian Masques that have newfound demand tend to do well. Charisma is one of those, and while it has seen a steady upward climb for the past few years on the heels of Niv-Mizzet, Parun decks. Niv is actually a card worth playing in Ghyrson, too, but not spec worthy in my humble opinion.

Ghyrson figures to push Charisma to new heights because the synergy is just so strong. In fact, it is debatably a wincon in this deck depending on your meta and/or matchups. We can see on MTG Stocks that some savvy financiers or players may have already identified this synergy:

I’m still a buyer of this card even with the small jump we’ve already seen. I like played copies at $6-7, and they can be found for that price sporadically if you look around. I think this has a realistic shot at being a $12+ card on TCG Direct. It might be a harder one to flip if you’re selling regularly, but it does figure to appreciate further enough to warrant a buy if you’re going to play a copy. You can always go foreign or heavily played for a budget option ($2-3).

Corrupted Conscience isn’t spec worthy but it is another wincon to call out. I notice the foils have been moving a bit more than usual, so perhaps some players are already picking it up for their deck. Regardless, I’m not a buyer of this for speculation purposes, but I certainly would be testing the card as a way to accelerate your win from 40 damage per opponent to 10. It’s too bad this got reprinted in Mystery Boosters because if not, it might’ve had some legs.

You might sense a theme with the cards I picked to speculate on for Ghyrson. They are all wincons or extremely powerful with “Tim” mechanics, and they’re all single-print rares.

Dismiss into Dream, much like Charisma, gets better in metas that have a high concentration of creatures. I am specifically focused on foils because of the premium they are currently commanding. You can find near mint copies for $2.50-3.50 and they’re moving at $6+ on Direct. I don’t have as high of a confidence level on pack non-foils, so tread lightly. There’s a scenario where this spec doesn’t hit because it is too specific to creature metas and ends up being left off the final 99, so I strongly urge you not to go deep on this. That said, if you need a copy or want to run a little arbitrage on the foils, have at it.

While the regular version of Sigil of Sleep doesn’t inspire me at all, the Urza’s Destiny foils are worth a look. At the time of this publication, it is possible to find NM and LP copies in the $8-12 range depending on where you look. Foils from Urza’s Destiny and other sets from that era of Magic tend to make for strong long-term holds similar to low-tier Reserved List cards. Any time we go through a run on collectibles, these tend to see a bump (note the graph in 2021).

Now that Sigil of Sleep has a real home in Commander, the foils will have real demand from players to buoy the collector demand that cyclically exists.

While I don’t see Sigil of Sleep going the way of Whip Silk, it is realistic to expect this to be a $15-20 foil in 3 months with near mint copies commanding a significant premium (given the age of this card, the more mint the better).

I’m a big fan of eating the cost and buying a foil if you’re building Ghyrson and just essentially sitting on it while you use it for gameplay purposes. If you do get a minty copy, it might be worth supplementing with a $0.25 non-foil in the actual deck to avoid the risk of any damage.

I hope you enjoyed my review of Ghyrson. Even if you don’t end up building the deck, this should give you some cards to think about for your next shopping cart. I love that once again we got a new commander which made older, obsolete cards relevant. Any time that happens it gets me motivated to talk about it since I can reconnect a bit with the nostalgia of my childhood.

Warhammer 40K was a smash hit top to bottom, and we will have a lot more to say about it on the Brewin’ With Conviction podcast. If you have questions about brewing or MTG finance that I might be able to help answer, please feel free to DM me on Twitter.

Andy Zupke explains keeping your Commander decks fresh by relying on variability built in with some very interesting options. 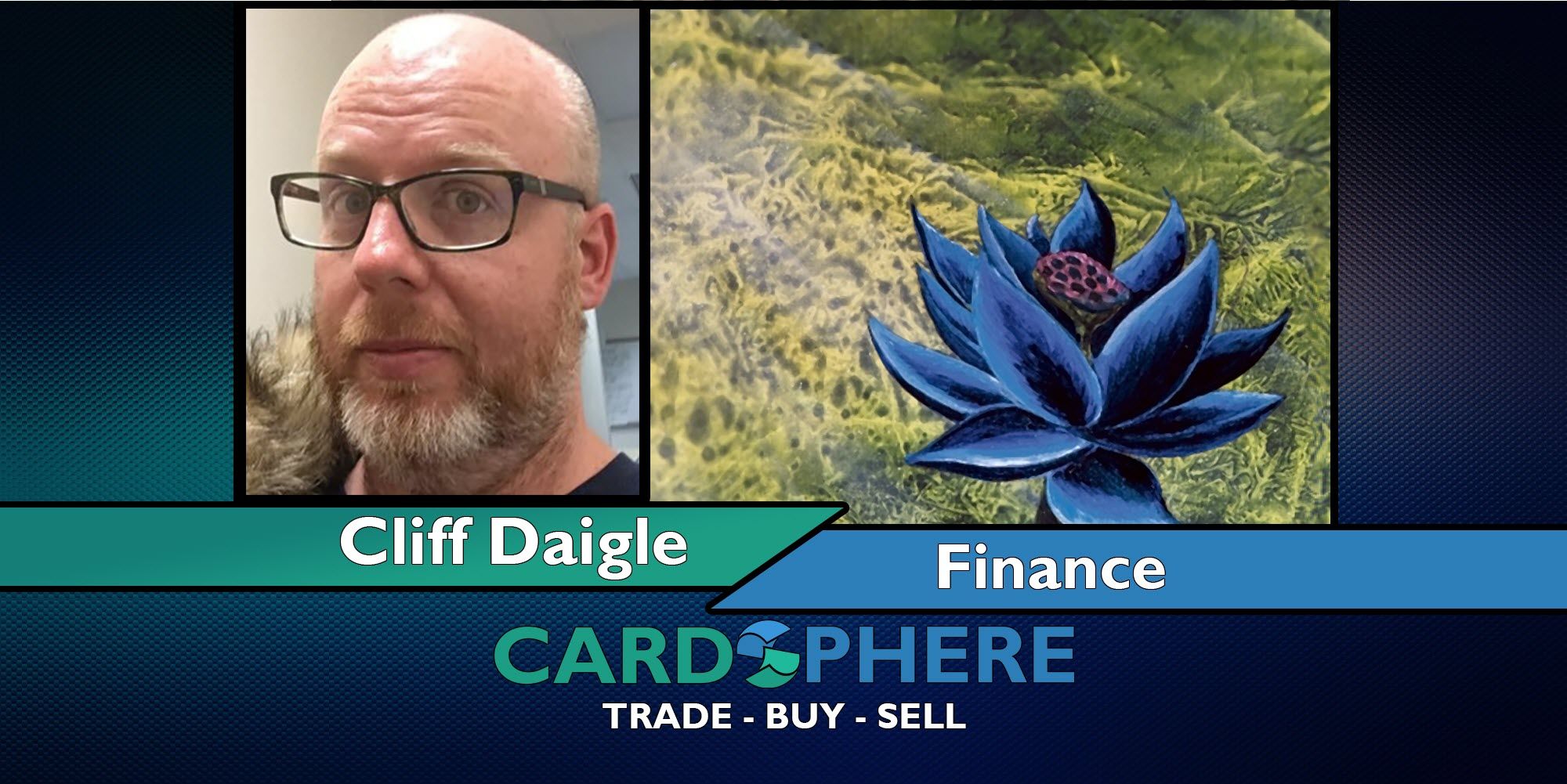