In writing, the hook is the opening that tries to grab the reader's attention and get them to continue reading. You need the exact same thing when you build a Commander deck. What is the thing about this deck that grabs your attention? What inspires you to build it? What makes you want to sit down and play with this particular deck? Hooks come in a number of different flavors and each of these can have a dramatic impact on how you go about building your deck.

This is a fairly common hook for an EDH deck. A new set comes out and there is some (potentially) amazing general that needs a deck built around it. You can even run across a hidden gem like Xira Arien from the old days and get inspired. Since you know that you are starting with a specific general, this hook has more of a top-down deck building plan. I wrote an article a while back (Post-mortem of a Failed EDH Deck) about a Queen Marchesa deck that is a perfect example. I knew the general I wanted so that set the colors for the deck. Queen Marchesa had a specific mechanic she worked with so this helped further shape the deck construction around her. As you may have guessed from the name of the article, even though this hook doesn't always work out it does provide a very strong starting point.

This hook comes at it from a bit of a different angle. We've all met that person who says "I only play black". They made their choice based on color. Everyone opting for this hook might not be so extreme in their preference, of course. It may be as simple as you've never played Bant (Green/White/Blue) or always wanted to try Dimir (Blue/Black) or you just keep foolishly trying to build a mono-White deck you don't hate. No matter the reason for picking the colors, once you have them then you can move on to picking the general or even picking a tribe or theme that your color(s) help support. Mono-green might consider elves or jump straight to Mirri, Cat Warrior. Abzan (Green/White/Black) might lead you toward a reanimator-style deck or Karador, Ghost Chieftain, or both. 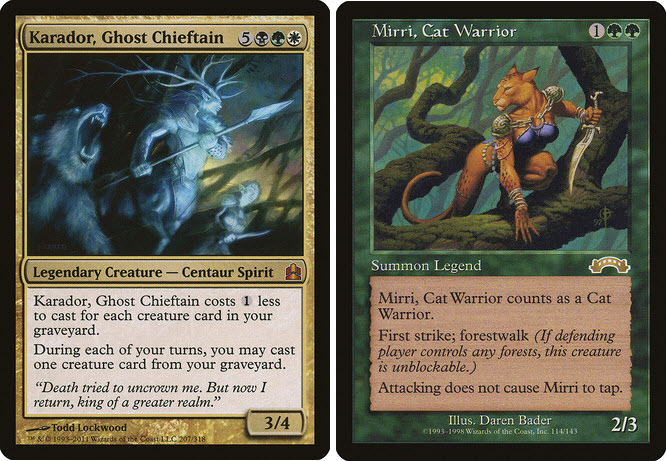 Slivers, elves, wizards, dinosaurs and even pirates can be a tribal deck now. I still don't quite understand how Pirate Ship is a human pirate while Skeleton Ship is just a skeleton, but going with a tribe as your hook can provide either a top-down or bottom-up starting point. If you know you want to play specific dragons like Hellkite Charger, Hellkite Tyrant and Kilnmouth Dragon in your deck, you can start building up from there and see what other dragons and potential generals would work well with them. If you just know you want DRAGONS!!!! (as many little kids and I have) then you can begin with potential dragon legends (like Scion of the Ur-Dragon discussed below) and use a more top-down approach. 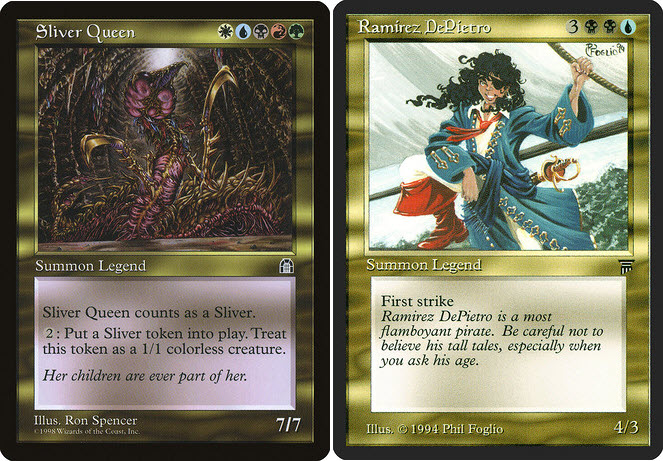 C19 Commander decks are a perfect example of a mechanic as your hook. These decks are built to specifically highlight tokens/populate, discard/madness, etc. Mill, reanimator, prison/stax and even the all flying deck would fit under this category.

I often fall victim to this hook more than anything else. It happens when you become enamored with a certain card or cards and decide that you have to build a deck around them. Unbound Flourishing is a great example. I keep looking at this card thinking I need this deck. I am currently torn between something with hydras and Marath, Will of the Wild. 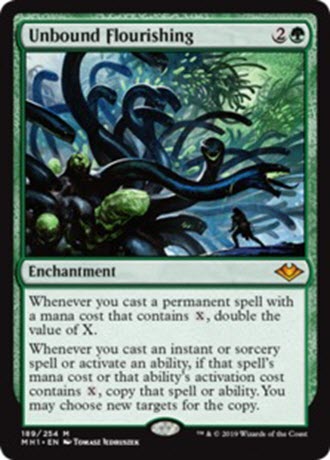 A "meta-hook" is something outside the actual game providing the genesis for your deck. Decks under a certain budget, built only from dollar rares or using old frame cards exclusively would be in this category. Speaking personally, I've gotten a great deal of enjoyment out of building decks with these more artificial limitations. I built a giant pile of $20 EDH decks (Building a $20 EDH Deck: Tatyova, Benthic Druid) and had a great time. These kinds of hooks are an opportunity to add some additional challenge into your deck building, expand your horizons in an often totally new direction and consider cards you ignored in the past.

Building a deck for someone that matches their preferred play-style can be a great challenge, especially if it happens to be different from your play-style. It's not uncommon for new players to be intimidated by the idea of building an EDH deck. This is a great way to help them get started and figure out what they do and don't like in EDH.

The bling is real. Maybe you just pulled a foil Golos, Tireless Pilgrim from a pack or you just finished picking up enough Simplified Chinese Portal 1 Forests to support a mono-Green deck. Bling doesn't even have to be expensive. You could play with one each of your favorite basic land pictures from the history of magic. It just has to be something that makes you smile. There are even monsters out in the world playing with all white-border cards.

The above list of hooks is by no means exhaustive. Hooks can be anything that gets you inspired to build a deck. Now that we have an idea of the hooks, it's time to look at the starting hook and final results for a couple of decks. 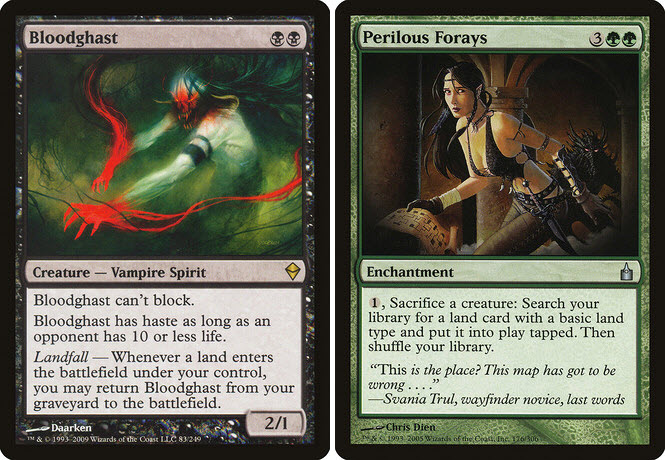 How did you get there from here?

The first deck I want to take a look at is my Xira Arien deck. The hook for this deck was originally a pair to cards: Bloodghast and Perilous Forays. The premise was pretty simple. Sacrifice Bloodghast to Perilous Forays to get a land and when that land comes into play you put Bloodghast back into play from the graveyard. Repeat. Remember, since the sacrificing of Bloodghast to Perilous Forays is part of the activation cost of the enchantment, it's in the graveyard to come back when the land comes into play. Another neat perk from Perilous Forays is that it fetches lands "with a basic land type" so you can grab dual lands, Ravnica shock lands, etc. as well as getting basics. With having those two cards as my hook, I moved on to looking at possible generals to support them.

I got fascinated with the idea of playing the prettiest bug wizard at the ball (Xira Arien) and things snowballed from there. The first draft featured landfall much more prominently. It had Amulet of Vigor, Rampaging Baloths and Lotus Cobra (amongst others). The deck has since evolved away from focusing so heavily on the original hook. Now I use it for two purposes. The first is for a fairly mid-range power deck that I can use if I sit down with random EDH players that I don't know. It shouldn't be a blowout but I also shouldn't be irrelevant in the game (unless I end up with a hardcore cEDH pod). The second thing the deck is good for is to try out new random cards in Jund colors. There are a lot of small synergies (and some odd choices) but doesn't have an overriding theme like "tokens" or "reanimator". It dabbles a little in a number of different strategies which makes it a good choice for trying out new cards. For example Doubling Season works to enhance the planeswalkers and do fun things with Feldon of the Third Path and Saproling Burst(and a few other things) but the deck isn't built around that. There are cards that can work well with other cards, but don't require them to function. Also Cremate. Never forget about Cremate. Starting from its rather specific hook, this deck has become the chicken soup or comfy slippers of my EDH decks. Plus, I still love putting tons of lands out with Bloodghast and Perilous Forays.

A Many Barbed Hook

Sometimes a deck isn't about only one hook. Dominos start falling quickly and you end up with a bunch of hooks that almost happen at the same time. This happened with my Scion of the Ur-Dragon deck. It started with a meta-hook. I wanted to build a 5-color deck that had a very inexpensive mana base. I looked at possible generals, saw the Scion, then it was suddenly a budget mana base dragon deck. Scion of the Ur-Dragon's mechanic turned it into a reanimator deck as well. Unlike the Xira deck above, this deck has stayed much more true to the starting hooks. Below is the most current version of the deck. This link will take you to the original, first draft version of the deck for comparison. 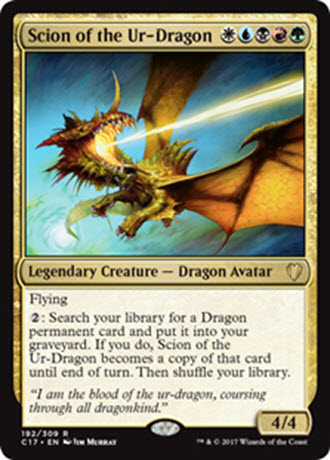 I hope this look at starting hooks for EDH decks and examples of where they can lead has provided some insipration and ideas for starting your next EDH deck. Remember, it's never too late if you want to do this: 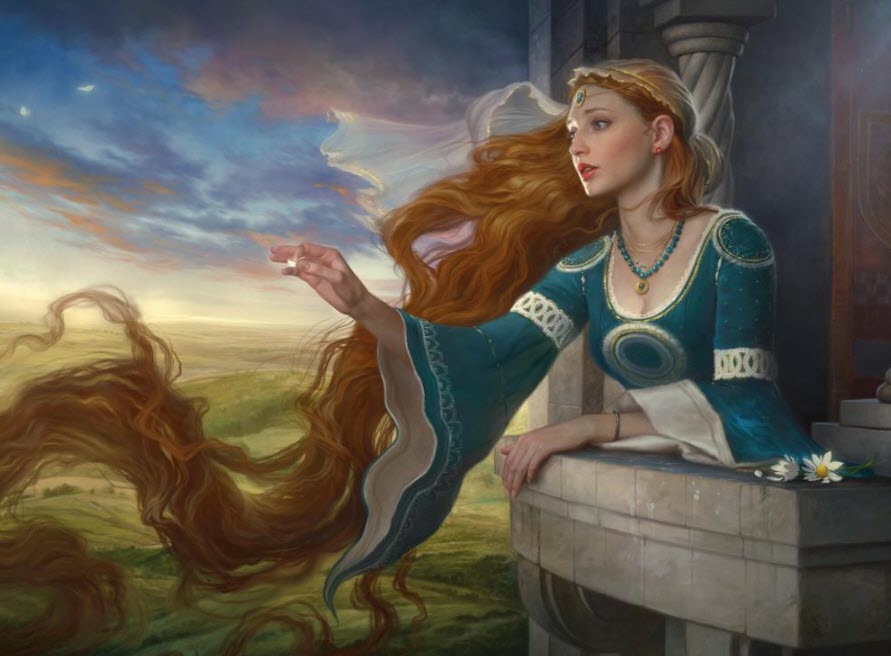 Darin Kenner looks back at some of the exiting Standard's decks he's written about, and evaluates how well they will survive rotation. 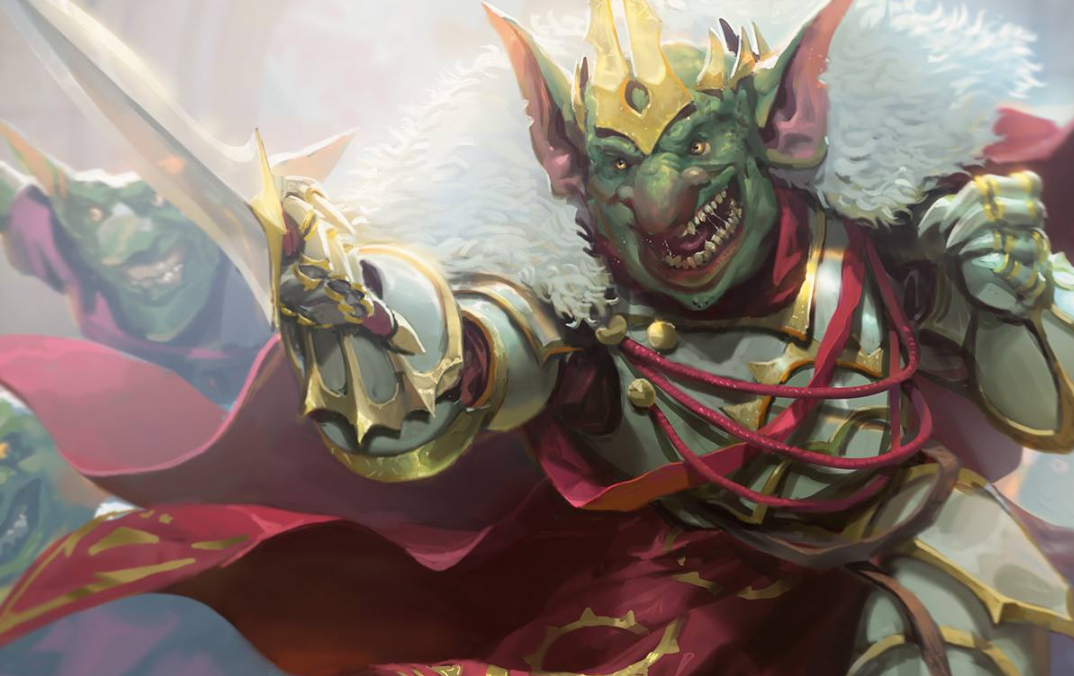 Lord Tupperware got hooked on the Grixis cube and came back with an intertesting, decision-rich board state for you to consider.