Greetings, friends! I’m very excited for today’s Commander article, because we’re returning to our series on deck building for beginners. Last time we covered the conception of a Commander deck, the “hows” and “whys” of starting a new deck. For this installment, we’re going to talk about the basic building blocks of a Commander deck.

Much of what we’re discussing today will be covered in more detail in later articles, so don’t worry if you still have questions after reading this. For now I just want to give you an idea of the basic structure of a typical deck. Most of this will be pretty standard practice among Commander players, but some of it will dig into more of my own preferences as a deck builder. Now let’s learn to brew!

Yes, I Said Half

The first category we’ll cover is the most important part of every Commander deck, but also the least fun or exciting. It’s your mana base. One of the fundamentals of Commander is being able to get ahead of your opponents and cast the big, splashy, game-ending spells before they can cast theirs. And if you want to do that, you’re gonna need mana. Lots of it. Mana sources generally fall into two categories: lands, which the rules dictate you can only play 1 per turn; and ramp, which is any spell that provides you more mana than what your 1 land per turn would normally give you. Cultivate and Sol Ring are classic examples of ramp cards in Commander.

You’re typically going to want around 48 to 50 cards for mana. Yep, that’s about half of your deck. Sounds crazy, right? I know at first this just sounds and feels like too much. And yeah, sometimes you’ll draw poorly and wish you had fewer lands in your deck. It happens to all of us. But hitting ramp spells on your first few turns and hitting land drops every turn always feels so much better than no ramp and not dropping lands for several turns in the mid-game.

Your main source of mana will be your lands. The topic of exactly how many lands to run comes up pretty frequently among Commander players on my Twitter feed, so I can assure you that this is hardly a settled issue. So what I’ll tell you is what works for me. I generally run 37 or 38 lands (a mix of basic and non-basic) and about 10 to 12 ramp cards. As you get more experienced, you’ll figure out what works best for you. The main thing to keep in mind is that there is no right or wrong answer, there is only what works for you and the particular deck you’re building.

Another important, although much smaller, section of your deck will be card draw and card advantage. This is any card you play that gives you more cards in hand, or access to more cards than what’s in your hand. This can be as simple as a Harmonize to draw three cards. Or, for example, it can be a card that allows you to cast the top card of your library, like Bolas’s Citadel.

In a game of Commander, your normal one card drawn per turn will not be enough. 10 cards in your deck for draw and/or advantage is considered pretty standard, and is in line with what I usually run in a deck. Again, you’ll need to figure out what works for you and the deck you’re building. Some strategies need more fuel and some need less. Some commanders are card draw engines by themselves, and since you always have access to your commander, you might consider running less card draw in those decks. Tatyova, Benthic Druid is an example of this. Since Tatyova draws you a card whenever you drop a land, you might consider replacing some card draw with some more cards that fetch lands out of your deck.

Card advantage takes many forms. For instance, many players consider graveyard recursion to be a form of card advantage. A graveyard recursion spell allows you to use cards in your graveyard, whether that be casting cards from there or bringing those cards back to your hand or the battlefield. When I’m brewing, I tend to leave recursion out of my draw/advantage suite, because it’s not as reliable as getting cards from your library. In the early game your graveyard might be empty, or you might have just been targeted with a Bojuka Bog. But I still allot 2 or 3 cards for recursion in every deck, unless my whole strategy is based around the graveyard, in which case I’d use a lot more. Victimize and Haunted Crossroads are examples of great recursion spells.

Next up, we’re going to talk about removal spells. Removal is anything that gets rid of other people’s stuff. Why do we want to do that? To put it bluntly, because you want to win the game. There are going to be many times in each game where you’ll want to have ways of killing or exiling a creature that is dominating the board. Or maybe someone’s enchantment is preventing you from doing what your deck is supposed to do. It’s important that you have answers to other players’ threats.

There are many types of removal spells. Path to Exile removes a single creature from the game. Decimate and Casualties of War can take out multiple targets. Board wipes, like Wrath of God or Blasphemous Act, take out pretty much every creature. Counterspells, like Arcane Denial, can be considered removal as well, as they also deal with threats.

So how many removal spells do you run? 10 is a good number, but, as always, you’ll want to adjust based on your deck’s strategy and your meta. What’s a meta? It’s the environment that you play in. Adjusting for meta is the concept that people’s decks should be attuned to the types of decks or cards they see from the people they play with the most. So if there’s a particularly nasty card that you see everyone playing in your LGS, it’s going to benefit you to run cards that can deal with that problem.

I separate removal into two categories: target and mass. Targeted removal takes out, wait for it…. targets. Mass removal spells will take out a bunch of stuff and usually don’t require a target to resolve. How you separate them is up to you. If you’re running a creature heavy deck, maybe take it easy on the kill-all-creatures spells. I’ll also add that most people don’t appreciate a ton of board wipes in a game, as they tend to make games last really long. I like to run 3 mass removal spells at most. The rest will be targeted, and spread out over different types of targets. Some for creatures, some for artifacts and enchantments.

Ah, here’s a topic that doesn’t get enough attention. When most people talk about the staples of a Commander deck, they talk about ramp, draw, and removal. But I always add a fourth crucial category, and that’s protection. This category of cards contains anything that prevents your opponents from stopping you. Being unstoppable sounds fun, right?

So what does protection look like? Most people use some forms of protection in their deck, even if they don’t talk about it much. Something that gives a single creature protection, like Swiftfoot Boots. Or maybe you give all of your stuff Hexproof with Privileged Position or Heroic Intervention. If your deck likes to win with creatures, Unbreakable Formation or Flawless Maneuver are great, because they’ll protect you against Wrath effects. I mentioned counterspells before as a form of removal, but they can also be a form of protection. Especially if you use protective counterspells like Keep Safe. If your deck is light on creatures, you’ll want to have ways to deal with massive attacks, like Fog or Aetherize.

The number of protection spells you run varies much more than the other categories that we’ve talked about. If your deck really relies on the commander to get the job done, you’re going to want a lot of cards that protect it. If your deck gets shut down by a specific type of card, you’ll want to run ways to protect against those. For instance, if you’re playing Kess, Dissident Mage, you’ll want to run cards like Disallow to stop a Scavenger Grounds from removing your graveyard. If Aetherflux Reservoir is a problem in your meta, throw Bind in your green decks. Bind is one of my favorite cards that no one ever sees coming.

Generally, I run about 5 to 7 protection spells in each of my decks. You’ll have to figure out what your preference is. Maybe you like to live dangerously and run fewer spells to protect yourself? Experiment and see what you like. But always remember that your opponents will always do what they can to stop you from winning.

The number one question that new players forget to ask themselves when building a deck is: “How do I win?” Your deck needs to have multiple ways of ending games. We’ll call this category “finishers”. If winning through combat is your aim, cards like Akroma’s Will, Overrun, or Bedlam are going to be necessary to get you the win. You can’t just say you want to win with combat and rely on all your creatures to get there. No matter how good your creatures are. You need that extra push. That’s what a finisher does.

Finishers are as varied as the number of different strategies that exist in this game. For instance, if you’re running a mill deck, cards like Maddening Cacophony and Traumatize are going to get you way closer to the goal line. And since you know your opponents’ graveyards will be overflowing from all the milling, you can cast Rise of the Dark Realms and kill everyone with their own creatures.

Or maybe you want to win with an alternative win-condition. This is any card that has some variation of “you win the game.” Thassa’s Oracle and Approach of the Second Sun are examples of this kind of finisher.

Try to have at least 3 finishers in your deck.

Doesn’t seem like there’s room for much else, right? Nope! You should still have room for plenty of cards. To complete the deck you’ll add in all those extra morsels of goodness that work with your deck’s strategy. In a later article, we’ll talk about the different ways to search for the best cards for your deck.

Here’s a recap of what we’ve looked at today:

So there’s your basic structure of a Commander deck. I hope this was helpful to all you new Commander players out there. Again, I’m going to spend a lot more time in future articles talking about everything that we looked at today. We are nowhere near done with this series. So stay tuned!

You can find me on Twitter at @AndyZupke and you can catch me streaming budget EDH with Scrap Trawlers at twitch.tv/scraptrawlers. Until next time, take care. And play lots of games! 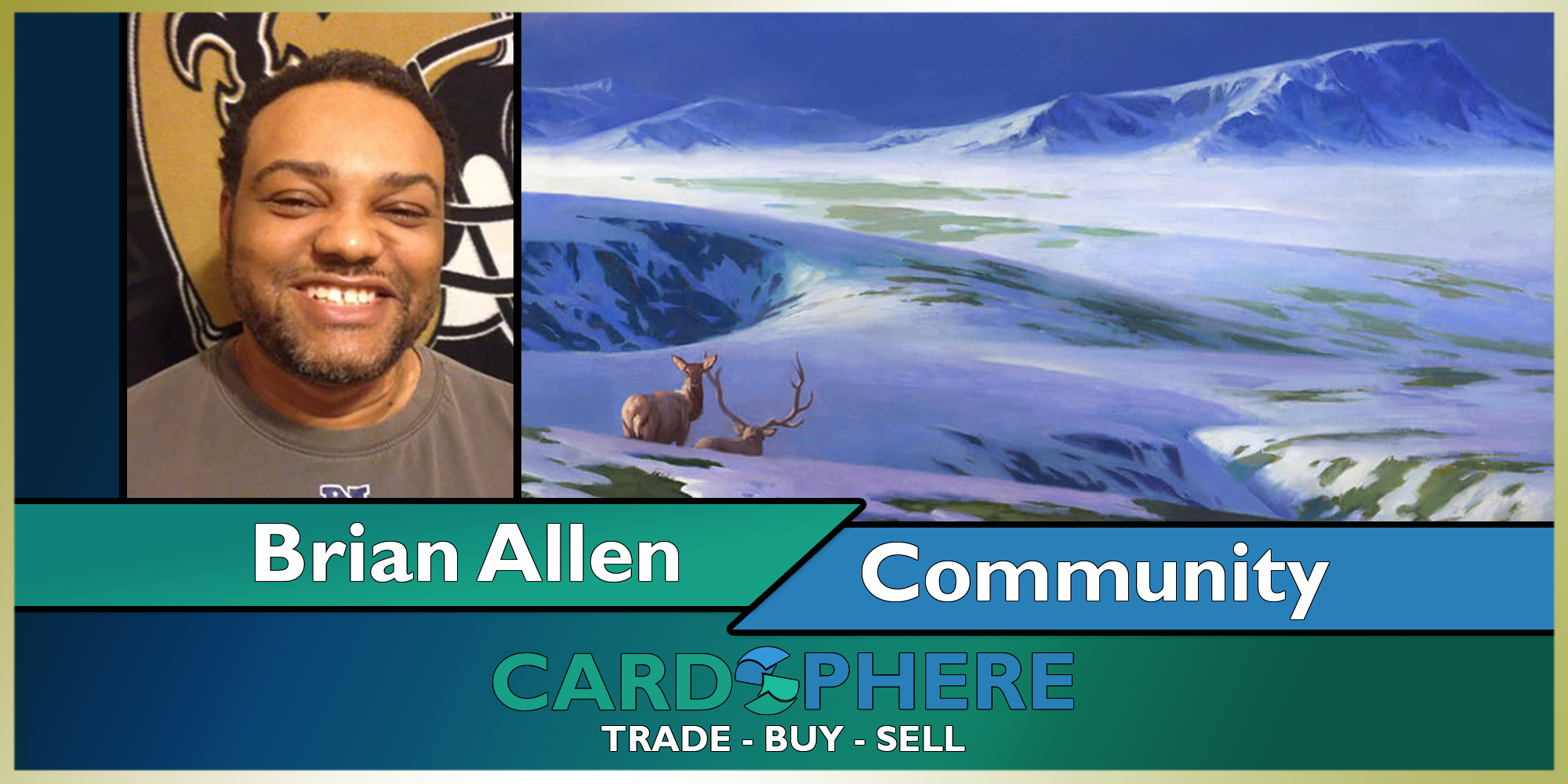 Like so many Cardsphere users and Magic players, Brian Allen went without power this month, and gained an appreciation for Magic: Arena.

Cliff Daigle is swapping out his fetches and explains how Cardsphere tags help him find the best way to do so.