Look, I know. I know it's one of the best decks in Standard...any Standard...EVERY Standard. I know that it's also usually one of the cheapest decks in Standard (whether on paper, MTGO, or Arena). I know it's a great way to grind (how I hate that term) and climb up the Arena ladder. But I just can't do it. There's something in my Johnny heart that won't let me play mono-red. This doesn't change the fact that there are times when you need to win, and you need to win fast.

When I was perusing the usual decklists, I found this wonderful list by Brian Boss, who used not-your-mom's-aggro list to get to the top 8 of GP Kansas City, and I reluctantly took it into Arena. Strangely enough, I not only loved playing it but it also touched enough of the soft spots in my jank heart to make me stop worrying and love the aggro. So let's take a look at the current state of the list and talk about how it works and what it does that most aggro lists don't do in the Arena BO1 ladder.

Part of my dislike for aggro may stem from my love of drawing cards. I don't claim to be an aggro expert by any stretch, but the play pattern of "play all of your cards and try to kill your opponent before your hand is empty and you're screwed" never appealed to me. And yes, I know about Risk Factor but that doesn't scratch my itch for some reason. But this deck does the next best thing to drawing card: playing cards more than once.

Almost all of your creatures in this deck exist to get you more than one use for each of your combat tricks. Dreadhorde Arcanist lets you play an instant or sorcery from your graveyard when it attacks, and since most of our tricks are 1-2 mana, you're getting a free spell on every one of its attacks. Tenth District Legionnaire is my favorite card to play on turn 2. In the current meta, you're often not facing anything on your second turn bigger than a Llanowar Elves, so playing a 2/2 hasty creature with a HUGE upside is usually a free two points of damage, and presents your first must-kill threat to the opponent. The three drops are where this deck gets tasty. Feather, the Redeemed is just insane if it lives. Three mana for a huge-bodied flyer that lets you return every spell that targets any one of your creatures (by the way, it's very important to Read The Freaking Card since it took me a few games to realize that it returned spells that targeted ANY of my creatures and not just Feather itself) is a great rate of return, and Krenko, Tin Street Kingpin leaves behind a small army of gobbos when he attacks and can flood the board on his own.

While the creatures are great, you have to understand that they're not indestructable. A pair of Lava Coils in your opponent's opening hand can ruin your day. So the remainder of the spells in the deck are focused on not only recycling cards but also keeping your threats alive. The most difficult turns for you are turn 2-3, where you're often playing a threat but sweating your opponent's turn. If they kill your threats on the turn you play them, you're in trouble. If you untap with them and some action, you're rolling. 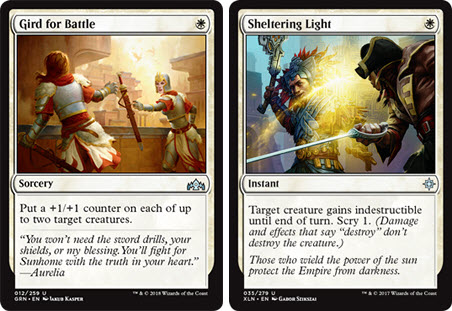 The two most important, irreplaceable cards in the deck are Gird For Battle and Sheltering Light. Gird For Battle often gets you a minimum of four power/toughness since you cast it for one mana and either get it back into your hand with Feather or cast it again for free with Dreadhorde Arcanist. It's even more if you're attacking with a Tenth District Legionnaire since you get an additional counter every time Gird For Battle targets it. The dream scenario with this deck is turn 2 Arcanist, turn 3 Legionnaire and cast Gird For Battle twice -- once in the first main phase, once as the trigger for Arcanist. If everything resolves you attack for 9 and end up with a 3/5 Arcanist and a 6/6 Legionnaire (plus two scrys to make sure you find more action on your next draw). That's a good turn 3.

Sheltering Light may not be the most important pump spell, but it is the most irreplaceable. I learned this the hard way, since I foolishly thought that I could replace a couple of older cards and just run the skeleton of this deck in the Ravnica constructed deck...and I was wrong. After something like a 2-7 opening run, I realized that most decks can simply pick off a couple of creatures and leave me with nothing but dreams and the 'Concede' button.

Reckless Rage isn't the best card, but it might be the most broken card in the deck. You'll notice that most of our creatures have three toughness. This means that Reckless Rage often just reads "R: deal 4 damage to target creature your opponent controls and tickle your own creature until it laughs and wrecks face anyway". If you have multiple creatures, you often get to use it twice on one turn. If you have a Feather, you get to use it on your turn AND your opponent's turn as it returns to your hand and lets you slowly wipe your opponent's board. Defiant Strike and Sheltering Light not only pump your attackers but also let you search through your deck or draw cards to make sure future draws keep you from flooding out. And Shock is...well...Shock. It's rotating soon, so enjoy it while you still can.

The rest of the decklist is up for grabs, really. In my experience, it's going to depend on the meta where you play. I took Boss' advice initially and tried Tocatli Honor Guard just because it's so janky that it just might work. It locks down any of the Golgari Midrange decks completely while it's on the board, and it can slow down the Command The Dreadhorde decks long enough to get your final points of damage through. It also has the aforementioned big butt that can absorb a Reckless Rage or take an extra Gird For Battle counter to improve its blocking or avoid spot removal. 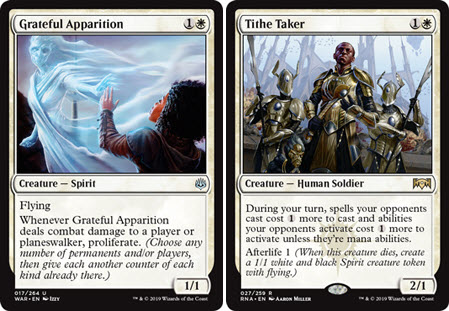 However, the card isn't as good as it was a couple of weeks ago. I'm still running it, but I've been experimenting with Grateful Apparition and I might play it more in the future. We're doing enough things to put counters on our creatures that the extra Proliferate trigger can make our bigger creatures biggest. But I also fear that it might be a "win-more" card that isn't worth the effort. I can envision some local metas that might want something like Tithe Taker more in this spot. Your mileage may vary.

Finally, I'm running a single Gideon Blackblade to tick up and give our creatures some more protection or gain us some lifelink points to keep the good guys on the right side of the race. It's possible that you might want to play more than one if you have Ol' Beefslab in your collection, so give him one last ride before we put him to pasture for good.

While this is an aggro deck, there are still decisions to be made on which creatures and which spells to play and when. Boss was right when he stated that the original build was a deck where you could mulligan aggressively. If you don't have an early threat and the right lands to play it, cash the hand in. It'll get even stronger with the London Mulligan since you really only need the right four cards (a two-drop, two lands of different colors, and a pump/protection spell) to get going. I've won from six easily, and even from five once or twice. Don't be scared to be greedy.

So in conclusion, get your red-eyed frenzy going. Eat some raw meat, do some squats, grunt unintelligible syllables at your opponent (or your monitor when in the privacy of your own home), and get mean with Boros Feather. You'll draw just enough cards to be able to come back to the Light Side in the end.

Thanks for reading, and as always...drive friendly! 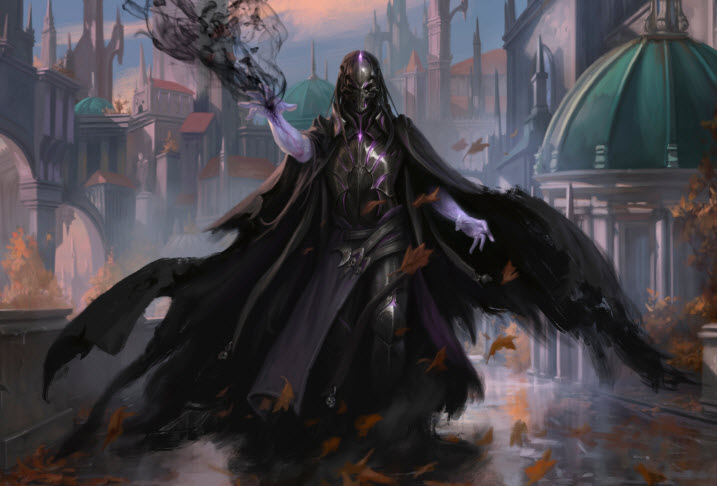 @Alby_MTG goes over what the London Mulligan does to Modern. A look at which decks are getting better, including one that gets a boost from expecting more mulligans from opponents. 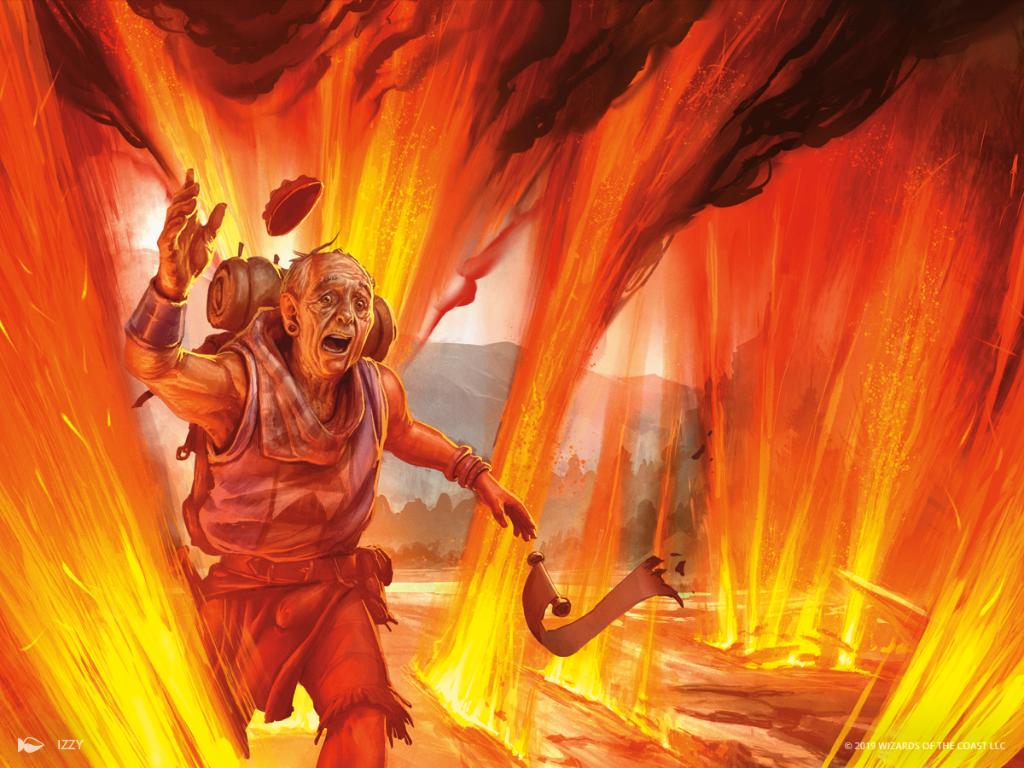 Get inside Lord Tupperware's head as he cracks six packs of Modern Horizons and goes through his build process.