Now that Magic Arena has become the go-to format for most online Standard play, it's created a challenge for my monthly column. Since I've mentioned this before, I'll summarize briefly:

So when I select decks to share with you every month, I try to keep card and collection limitations in mind. I want F2P players to benefit as much as Mythic grinders (which I'm not because I like sleep). Luckily for all of us, my current ladder addiction is not so much a pure decklist as much as a toolbox... a set of categories of cards that can be mixed and matched in order to still function with the cards that you actually own and can be improved or expanded whenever you open that sweet new mythic from a pack.

With that in mind, let's think about Bant Midrange for a second. Bant Midrange aims to use mana dorks and creatures with ETB effects to get to our big finishers as fast as possible and overwhelm the opponent with a huge board. This is also a great list to use on the best-of-one side because the cards can be modified to help you with your weakest (or most hated) matchups. You also get the benefit of being able to make multiple versions of the list...some more dependent on planeswalkers, and some more dependent on creatures. So rather than the usual format, let's talk about the categories of cards in the deck, and I'll share with you my list category by category.

We're trying to get our big stuff out on the board as fast as we can, so we play a whopping TEN creatures that make mana. Most of the standard lists only play eight dorks (the four elves and the four Incubation Druid), but I lean more towards the Paradise Druid for a couple of reasons.

First, I'm not generally trying to evolve the Incubation Druid in the normal sense for mana, and additionally I love the hexproof on Paradise Druid. Often, by the time our opponent can play a non-targeted board wipe, we've gotten our big stuff out and it's not as much of an issue. Second, I want ten dorks because they have additional value with our finishers...

Here's where the limitations of your collection will come into play. I picked up a playset of Oketra early in the WAR lifecycle because I drafted a copy early and was convinced it was going to be a player in Standard for a while. I attempted a mono-white all-in version of an Oketra list early, but without the assurance of some evasion or a way to keep you alive it was really inconsistent, so it needed the copies of Hydroid Krasis I had opened to keep it functioning. I have one fewer than I probably could use because of collection limitations, but I try to make up for that by leaning on my mana dorks and ramp more than most lists. 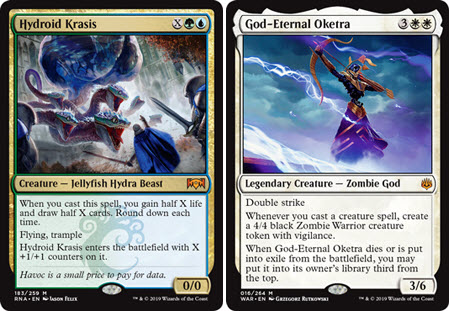 I'm trying to get Oketra out MORE than I'm trying to Krasis. This build WANTS Oketra and is constructed to take advantage of her abilities as a nearly-impossible-to-remove house that makes Super-Big-Gulp-sized zombies to run over the endgame. In fact, I could see the possibility of going 4-2 Oketra to Krasis and seeing how that goes.

But smoke 'em if you got 'em, and try the finishers that make you happy.

These are the cards that are going to keep you alive in the midgame and affect the board. All four are essentially non-negotiable in some number. The Guardians not only get you some early board presence but can be good ways to get more cards into your hand to keep triggering Oketra. Deputy removes virtually anything in the early game that's going to cause you headaches like Conclave Tribunal, Search for Azcanta, and any other creature you'd like to assume room temperature.

Knight does the same to any enchantments or artifacts as well as gaining you a bit of life against mono-red and mono-white, but the most important tool is Frilled Mystic. I can't imagine not having a playset of this house. Once you get Oketra out, you can almost always cast the counter on a stick, and it not only gets rid of your opponent's next play but it also triggers Oketra. I'm continually surprised how few people actually play around it. When you leave four mana up against most decks in GGUU, you're telegraphing a Frilled Mystic play, and it still goes off more often than not.

No, you're not miscounting. I'm only playing 22 lands in this build. I'm sure this ends up biting me in the butt every once in a while, but because I'm not relying on a gigantic Hydroid Krasis I can usually get away with it, along with playing more copies of Paradise Druid than the normal build because of that yummy hexproof. Obviously, you've really got to have the checks and shocks since we're playing three colors. I like budget builds as much as the next person, but I don't think there's any way around that.

This is the category that I cut in order to move the deck towards what I enjoy playing. Most stock lists play a full SEVEN planeswalkers, with an additional Baby Teferi and a full playset of Vivien, Champion of the Wilds. Since I don't own them, I don't play them. I'd like to test Vivs eventually, but a copy of Big Teferi comes in handy if we can't find our Oketra, especially when we can tick up for card draw and untap lands to use Frilled Mystic for protection. So what are we doing instead of planeswalkers?

When I was originally building this deck, I wanted lots of smaller creatures that would trigger Oketra in the late game. But as I played, I noticed that the deck really seems to like having +1/+1 counters on things and it's possible that we could take advantage of it. Since Oketra is a double-striker, she loves counters. Healer's Hawk will always take one (plus we like having a tiny creature for Oketra triggers). Merfolk Skydiver is such a limited house that it's hard not to play it in Standard...it has evasion, can make something (including itself) bigger, and is an excellent mana sink in board stalls. Shalai protects all of our stuff and puts a counter on everything when we have extra mana and nothing to do with it.

But the hidden star of this deck is Pollenbright Druid. This little wonder does so many useful things in this deck when we commit a couple of cards to counters. We almost never want to play it in the first few turns (we have dorks for that), but in the later game we can start other creatures on the growth package, we can proliferate the crew to make our creatures and planeswalkers bigger, and there are corner cases where it's proper to put the Druid's counter on one of our evolve creatures. It takes a whopping five mana to make Incubation Druid a huge dork, but Pollenbright Druid does it with just two (often netting a mana in that turn). There are even plays where it's beneficial to put the counter on Growth-Chamber Guardian rather than evolving him when Oketra is in play. What would you rather do: spend three mana to evolve GCG and get a card, or spend two on Pollenbright, put the counter on GCG to get another GCG (the search ability triggers when you put a counter on it and not only when you evolve it), and maybe even play the new GCG to get an additional 4/4 zombie? I know what I'd rather do.

There are certainly things that I'd like to mess around with in this list. Card draw is lacking outside of Hydroid Krasis, so I've considered trying a copy of Beast Whisperer to help that out. However, four mana is not really where we want to be playing a creature that doesn't have an ETB effect, so I'm not sure about it. In addition, I have it in my head somewhere to try an Abzan version of this deck that replaces the planeswalkers and counters with good removal and other ETB monsters like Ravenous Chupacabra. But that's for another time... at least for now, if you enjoy playing creatures and making more creatures with those creatures, this might be your jam! 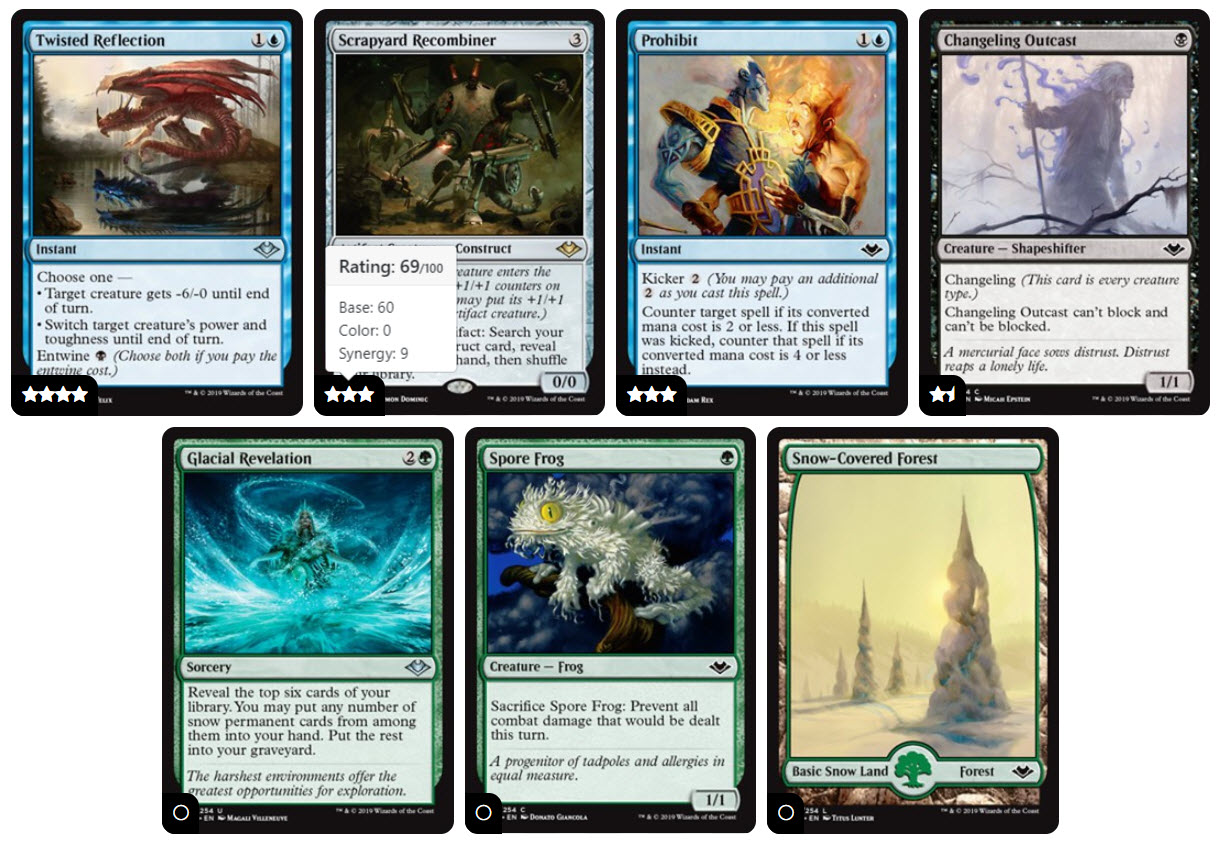 Just in time for the release of Modern Horizons, the Cardsphere Draft Simulator has been upgraded with a powerful synergy system, greatly improving bot performance. 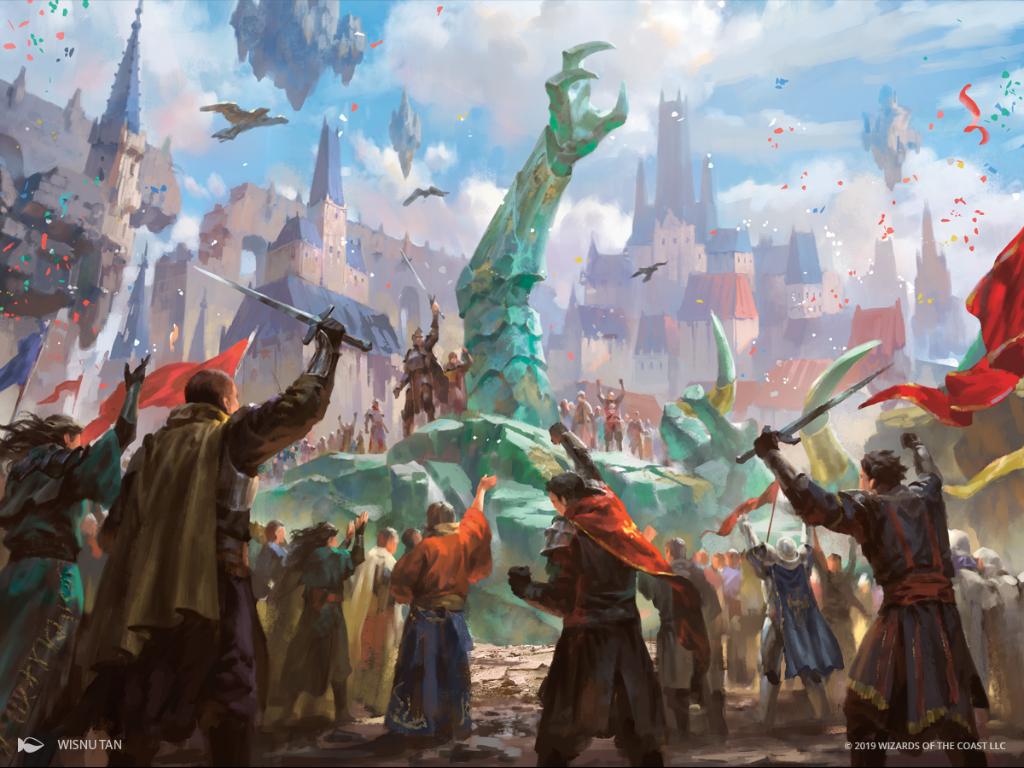 As usual, we celebrate our anniversary by putting out a ton of data for people to pore through. This time, it's Efren's turn.