I will be honest - what you are reading is not the original version of this article. I initially took it in a much, much different direction, lamenting at the lack of reactivity and/or anticipation from WotC to address what clearly emerged as a problem less than 24h after Zendikar Rising was released on MtG Arena.

But then I paused.

Because chances are this is a line that many (if not all) content producers have followed for the vast majority of the past two weeks, culminating in the showcase that was this past weekend's 2020 Grand Finals and its published metagame shares, both in Standard and Historic. And to be honest, it is getting rather old, and I do not want to give you another bunch of paragraphs that would just pose as an echo chamber. Instead, I can choose to look at things from a more positive perspective and explore the format to see what will be the new strategies most likely to have a shot at performing well in the new environment. As such, while I will quickly mention the top tier lists that survive the B&R best, I will be skipping the established lists like Boros Winota, MonoGreen, or even Esper Doom in the interest of approaching the format with an open mind.

The announcement and its direct implications

As much as Omnath, Locus of Creation and Lucky Clover getting the axe was expected, I was a little more surprised to see Escape to the Wilds included as well. However, as long as Lotus Cobra sticks around, why take a chance with what is essentially a draw 5/ramp 1 spell? Also, kudos to Embercleave for yet again dodging another B&R announcement, which would make Thomas A. Anderson proud... (brownie points if you figure this one out ^^)

One archetype that uses Embercleave and suffers no consequences from this announcement is Gruul Adventures, concocted for the Grand Finals by MTG Pros Autumn Burchett (@AutumnLilyMTG), Emma Handy (@Em_TeeGee) and Luis Salvatto (@LuisSalvatto) - and delivering two Top 8 slots for Autumn and Emma:

This list will likely remain one of the most played archetype in Standard, with a ton of synergies to go along its aggro main plan. I keep reading here and there that Embereth Shieldbreaker // Battle Display can be removed from the sideboard, but I disagree: it is a very good, cheap solution to an opposing Stonecoil Serpent, another card I expect to stick around the top tables (sigh, tabletop mentions...) in this post-Omnath format. Another artifact to consider having to deal with is Mazemind Tome, which I will cover later on. In short, I think keeping 2-3 copies of Shieldbreaker could prove useful as the format advances.

A card that will stay in the sideboard for sure is Chainweb Aracnir, made very popular recently for its ability to take care of pesky Rogue and/or Shark creatures on one hand, and for the fact that it does not care in the slightest about any mill plan with its Escape cost.

Compared to how the Grand Finals coverage/MTG Melee teams branded Manfield's deck, I am deliberately adding "Control" to its name since it clearly deviate from more traditional Rogues list (well, at least for what "traditional" means so far in this 2020 Standard season) as it choses to integrate a strong board/hand disruption component in lieu of more aggressive choices - but making up for it by electing to run a full playset of Vantress Gargoyle over Ruin Crab. I would anticipate some change in the sideboard, though; if more aggro strategies develop, like White Weenies, this build is going to need some mass removal from Extinction Event, maybe over some of the Agonizing Remorse now that most of the obnoxious Escape threats have been dealt with by R&D.

Let the brewing begin! (it has, already)

Moments after the announcement, many shared their vision for what could perform well on Arena; and since the effective date of the B&R got moved to the same day as the announcement itself (because, frankly, it is 2020 and it should not be otherwise anyway), it was quite the treat to see how things evolved once the patch got deployed.

One of the lists that looked the most fun out of the gate was from John Roberts II (@JdoubleR2) and features Fiery Emancipation.

At the time of this writing, John is 26-5 on the ladder and up to #8 Mythic rank. I have to admit, any list that can feature Irencrag Feat, Fiery Emancipation and Brash Taunter together is definitely getting my attention. Skybilz and I did mention Magmatic Channeler in our joint article already, but it is worth mentioning how relevant this card will remain as long as the Rogue/mill strategy will be present in the format; I should note that Phoenix of Ash also does a good job as an additional threat and blocker against that archetype. Tectonic Giant is a card that had been gathering a lot of attention during Theros spoiler season, so it is nice to see it featured prominently here, too.

We are down to one Theros titan available in Standard, and here is a list where it can truly shine, this version courtesy of Michael Majors (@MichaelJMajors) for SCG.

Truly the epitome of a midrange deck, right? As I mentioned earlier when discussing Embereth Shieldbreaker // Battle Display,  Mazemind Tome should see an uptick in play between midrange and control strategy, and a list like Majors' is a good evidence of that. Between filtering, card draw and lifegain, and to quote the author himself, "Mazemind Tome is the poster child for getting a return on your patient investment." Tome has long been adopted by Tron strategies in Modern too, so from a gameplay perspective I would recommend grabbing your copies now when you can still find them cheap.

It is also interesting to look at the card selection and splits that Majors is recommending in this iteration of the deck: Bloodchief's Thirst, Heartless Act, Hagra Mauling // Hagra Broodpit and Grasp of Darkness constitute a solid suite of spot removal, in addition to the Red direct damage spells. One should note how there are more Grasp copies than Act ones, which makes sense if the environment shifts more toward indestructible creatures (MonoWhite Weenies, Wicked Wolf in MonoGreen) or a Stonecoil Serpent out of Stomp/Heartless Act range.

I stumbled on this list while watching Gabriel Nassif's (@gabnassif) stream while researching new Standard brews for this article. And since it is an Izzet list, I cannot not share it.

Admittedly, this list can do a whole bunch of nothing in the early turns; but when Rielle, the Everwise hits the board, things can go pretty nuts pretty fast: Cathartic Reunion turns your two worst cards into a fresh set of five, now throw Sea Gate Stormcaller or Double Vision into the mix for even more spectacular results. The spot removal spells Blitz of the Thunder-Raptor, Shatterskull Smashing // Shatterskull, the Hammer Pass and Spikefield Hazard // Spikefield Cave can help you control the board until you reach a critical mass of spells in your graveyard to throw Rielle at your opponent via Kazuul's Fury. Wait what? Your opponent milled your win condition or you had to discard it to handsize? Not to worry, may I introduce you to Experimental Overload - which has fantastic synergy with the aforementioned Stormcaller and Vision? Ah, and while we are on Double Vision, I will point out that it cares about the first Instant or Sorcery you cast each turn, i.e. you would get the trigger on your opponent's turn as well. See? Lucky Clover did not really leave the format after all... (I kid, I kid).

The biggest change I would make is in the sideboard, and replace the terribly slow Midnight Clock with Ominous Seas, which was already played in earlier iterations of Izzet Spells when Ikoria first hit the Standard scene. With the speed at which the build can go through the main deck, it is not rare to be able to sprout a couple of tokens in the same turn.

This is of course not intended to be an exhaustive review of what is out there, primarily because we are barely a couple of days removed from the B&R announcement. It's still refreshing to see that players are willing to explore the format now that the cards that were deemed to be the most problematic were (finally) dealt with, and new strategies that were essentially DOA when compared to Omnath builds at the very least get a fighting chance to make it up the Arena ladder. There is also plenty of time before the next Standard set comes out, and new tournaments and qualifiers pop up on MTGMelee often enough that we should be getting a good flow of information over the next week to help narrow down what works and what does not.

Note that I only took on Standard, but Historic was also deeply impacted by Monday's announcement. And with Kaladesh Remastered making its landfall this coming month to keep expanding the available card pool closer to Pioneer, I will start digging further into it, as I am quite curious about this NeoStorm deck I keep hearing about...

As always, thanks for reading, and feel free to reach out on Twitter @poppu_mtg for comments/questions! 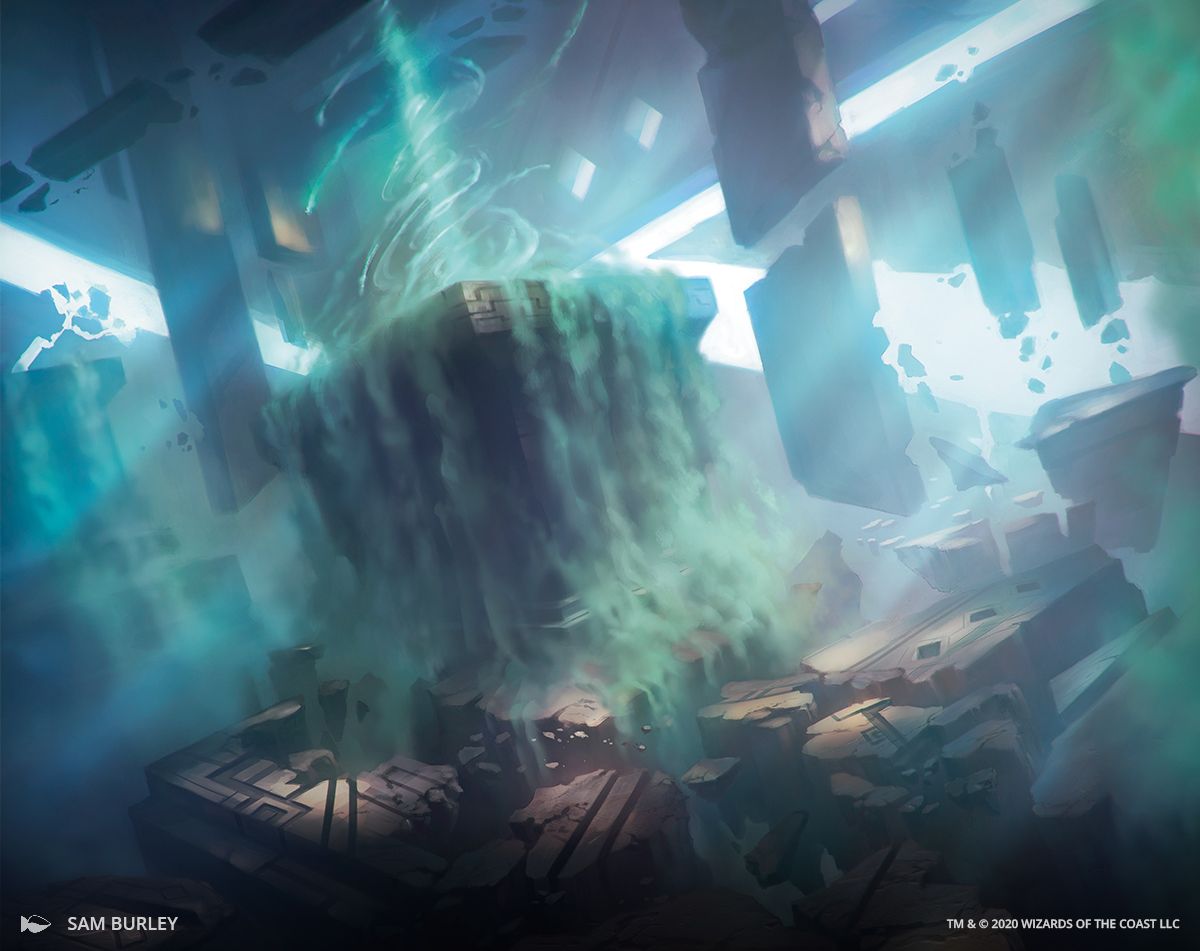 This week we brought on Magic content creator and commentator AliasV! AliasV is best known as a streamer and for commentating on various Magic tournaments (Mythic Invitiationals, Arena Championships). We discussed her start in commentating and content creation and what it takes to start commentating

All of the glory without costing a fortune! Andy is back with his top budget EDH picks from Zendikar Rising.